Fast food in a Korean Village

Something we have noticed time and time again, in every nook and cranny of Korea, is that there is an over-abundance of 양념 치킨 (yangnyeom chikin) fried chicken restaurants.  It is unbelievably popular here!  To illustrate just how popular, we decided to photograph all the fried chicken shops located on just ONE block of our little village. 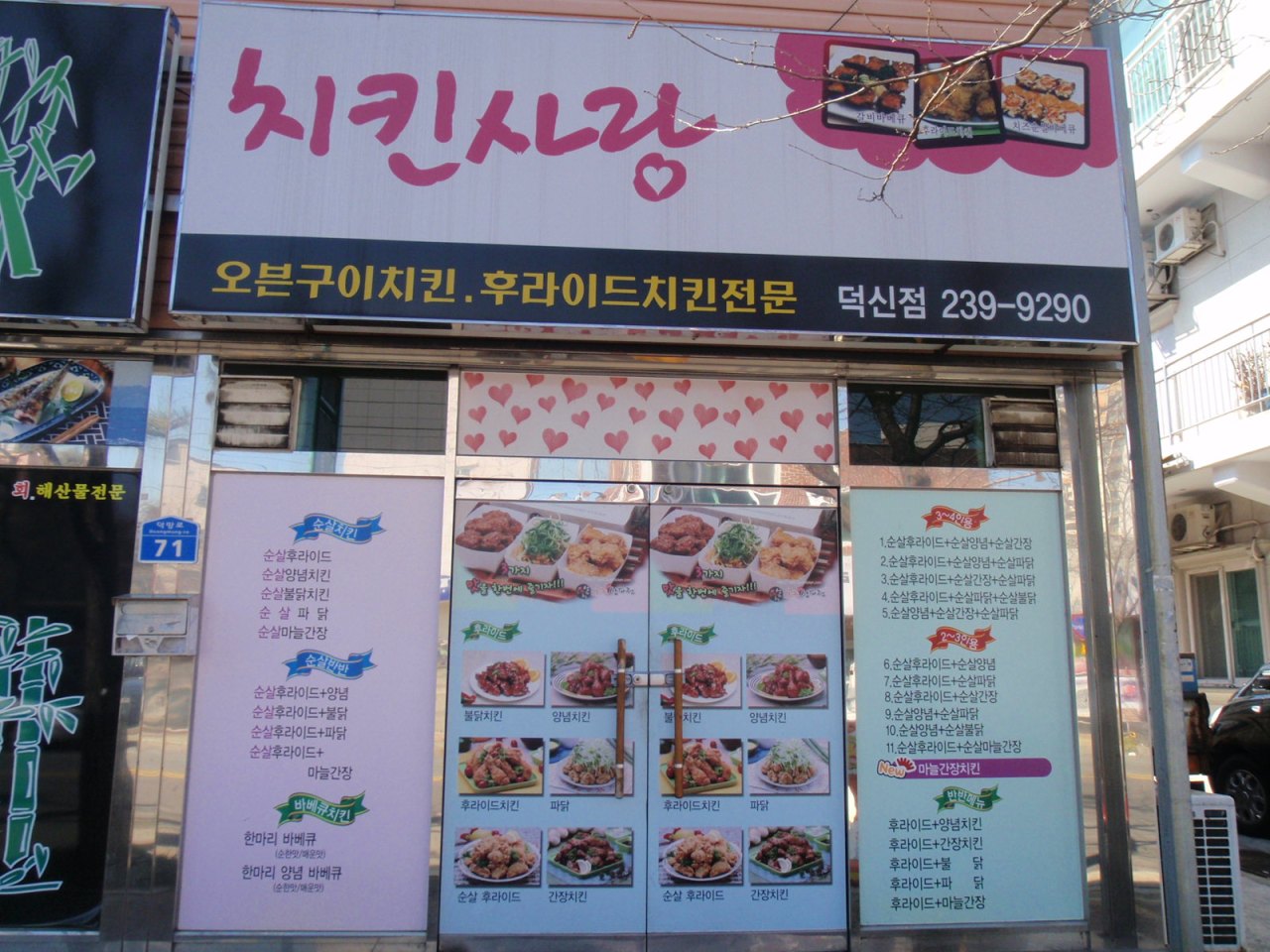 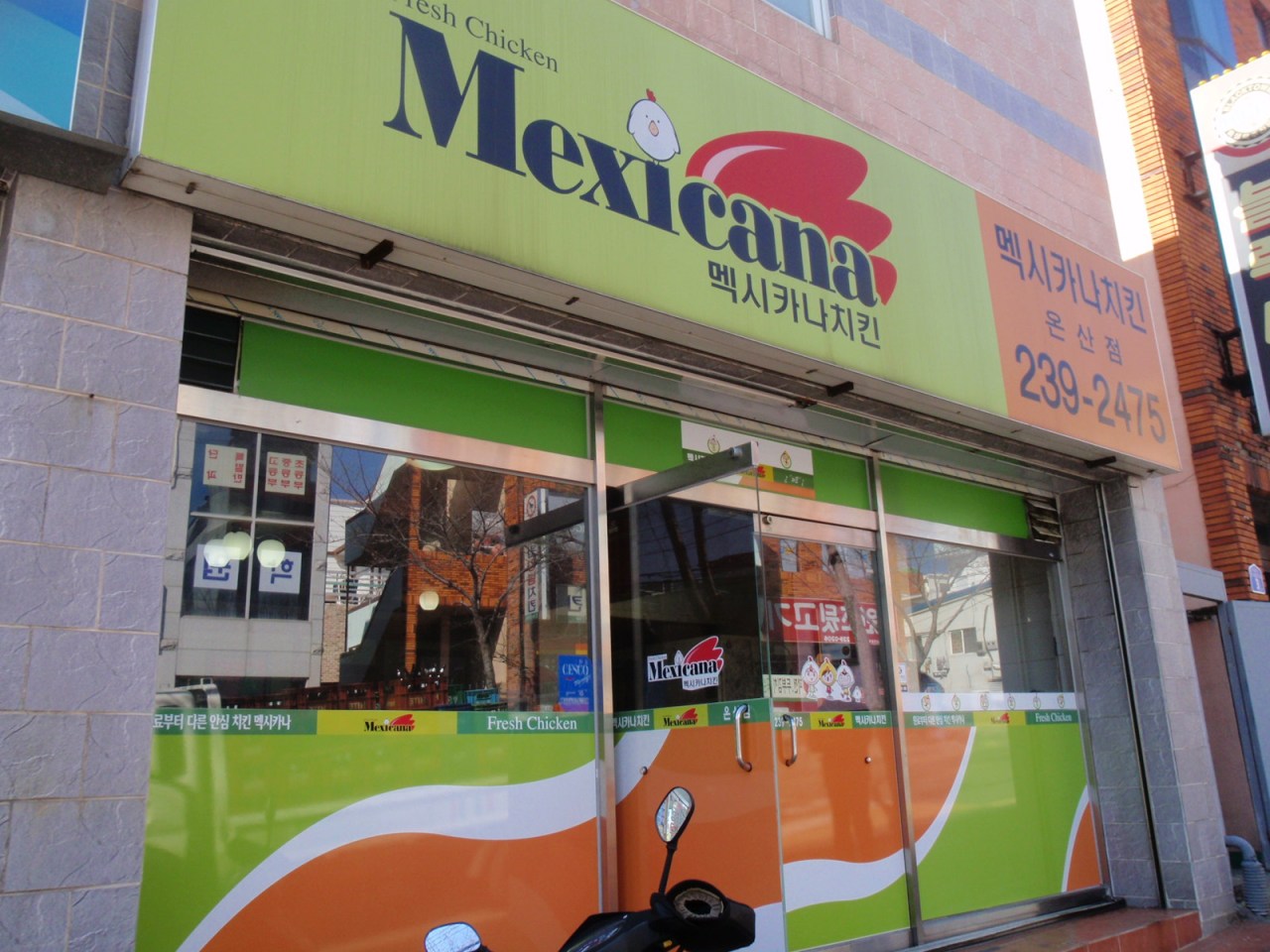 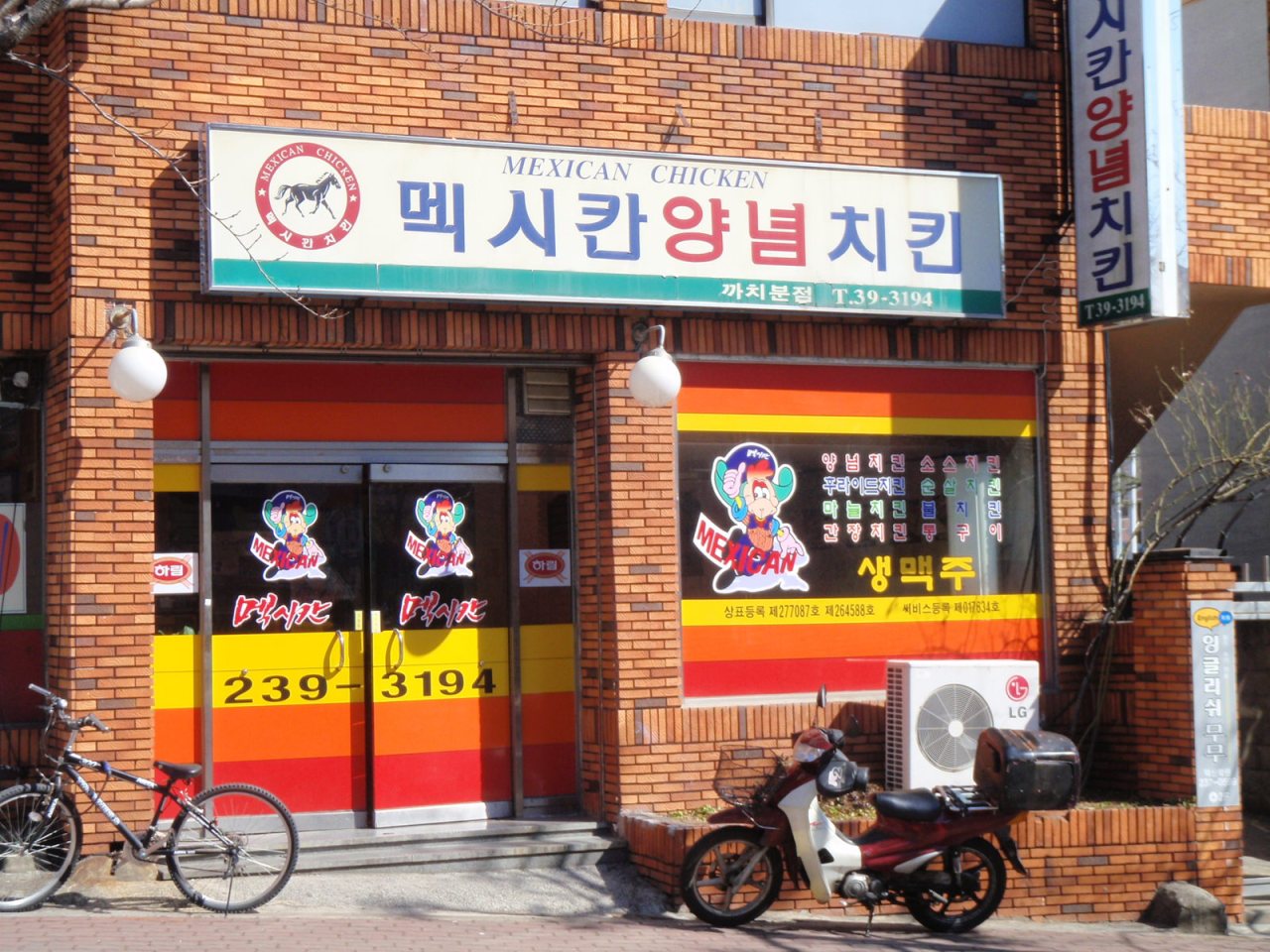 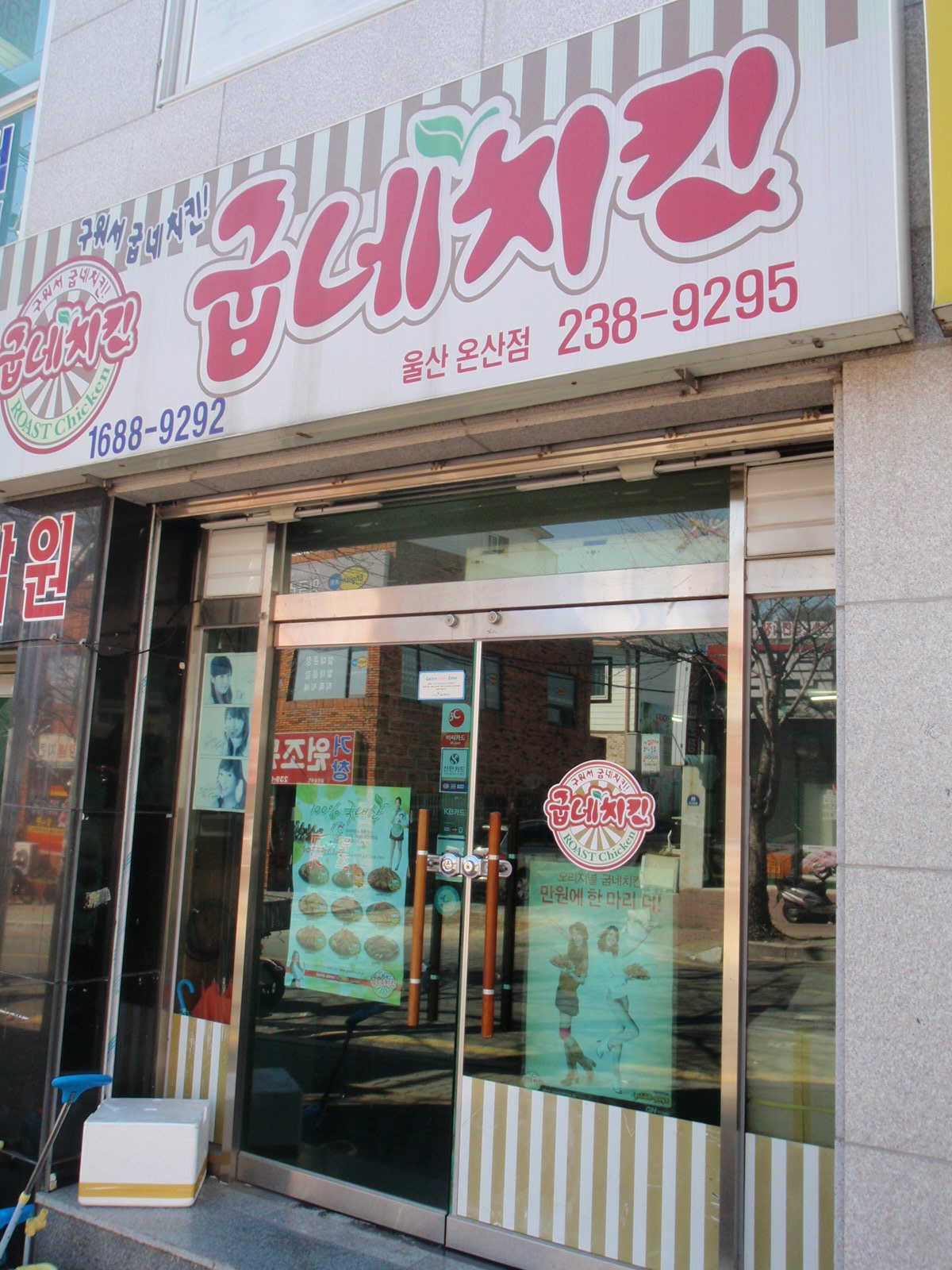 That’s a whole lotta fried chicken!!!  All these places sell just one menu item – fried chicken.  No sides (other than beer or soju), no vegetarian options, just chicken fried in a number of different styles.

Mom’s Touch is the slight exception to this rule as they also sell burgers – available in fried chicken flavour or course – but also beef and shrimp and some sides.

Lotteria, however, is the number one chain burger joint in Korea – kind of like Korea’s version of McDonalds, Lotteria is yet another branch of the corporate giant Lotte.

An interesting fact about most pizza places in Korea is that they don’t use real cheese!  Instead, they use processed or imitation cheese made from vegetable oil and soy products.  Blech.  Anyway, Pizza Maru do a roaring trade in pizzas, and they also sell sides of…yip, fried chicken!  On the positive side, their food comes nicely gift wrapped with a pretty red ribbon.

If Americanised fast food is not what you’re after, rest assured, there are myriad other options.

Like most Asian countries, Korea has a variety of cheap and tasty street food.  We’ve found our favourite local vendor, whom we have affectionaly dubbed “The Fried Guy”.  At Fried Guy’s stand you’ll find all manner of Korea’s favourite snacks.  There’s 떡볶이 tteokbokki – a mix of rice sticks and fish cakes swimming in a bright red sauce that varies in spiciness from place to place. 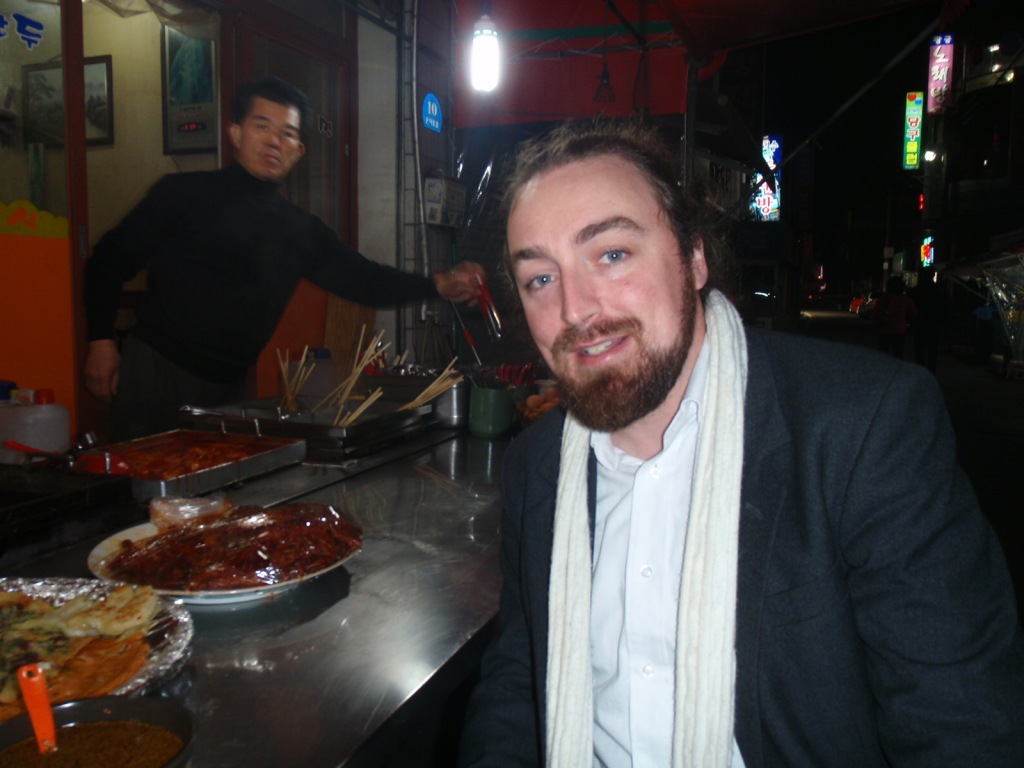 The variety of things battered and deep fried is impressive.  Of course, the standards like chunks of fish, crab sticks and the like abound but there are also deep fried whole boiled eggs, fried vegies, mandu…and who can forget the Korean style hot dog?! These contain a teeny, tiny sausage encased in an inch thick batter, which is weirdly sweet.  Not quite the taste sensation you would expect.  Oh, and in case you were wondering, yes, he has fried chicken too. 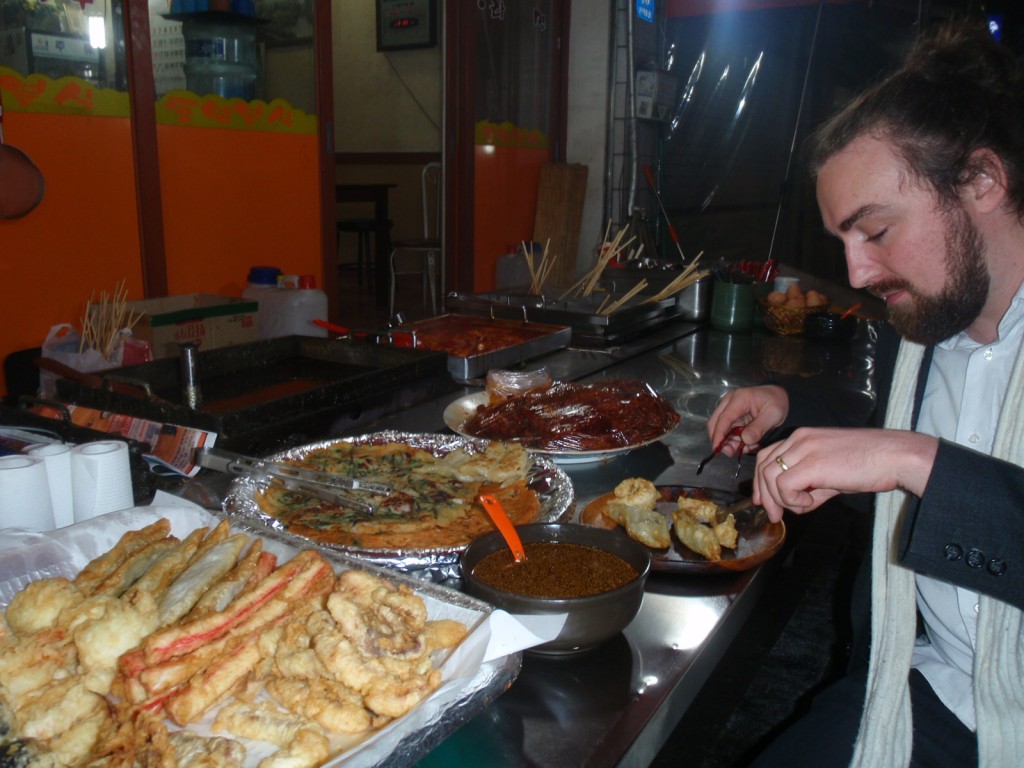 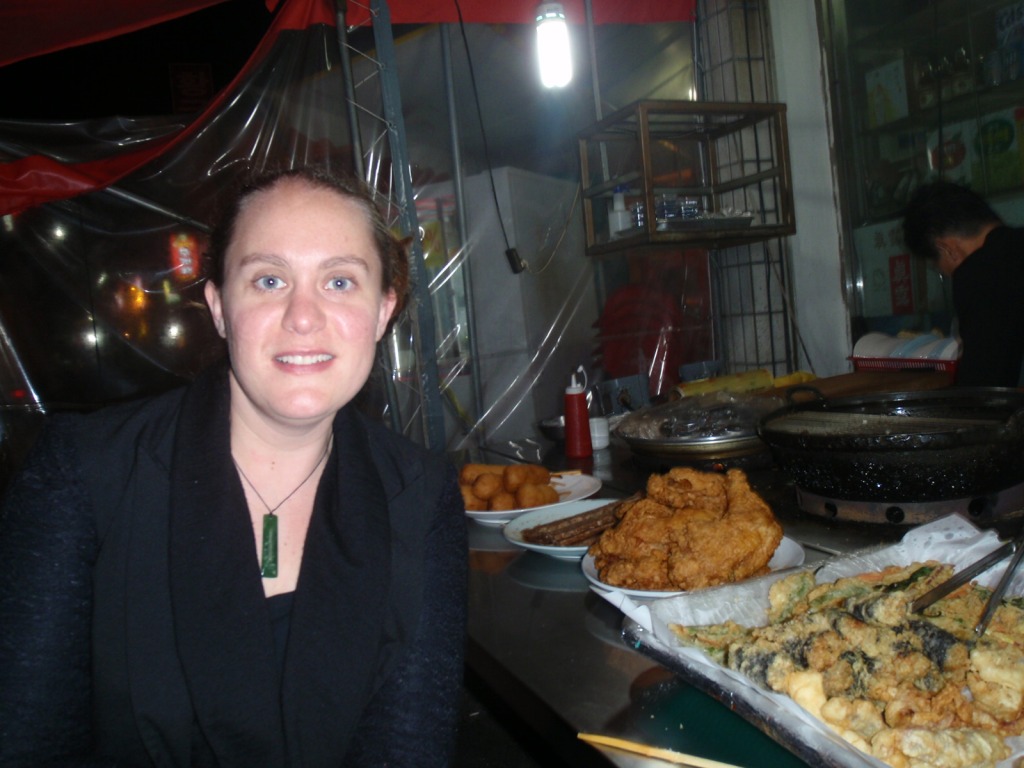 Behind the sugar coated hot dogs in the picture below you can see a metal round plate covered in glad wrap. In here you can find one of ‘The Fried Guy’s’ most revered delicacies. For a cheeky 5000 won ‘The Fried Guy’ will whip you up a container of tripe and black pudding!  YUMMY!

Stepping away from the fried variety, one thing we miss in Korea in a good old roast chook.  Having no oven pretty much rules this out.  Luckily, most nights of the week a truck can be found on the main street of the village in the back of which rotate the most succelent rotisserie chickens.  And juicy hunks of pork.  This is the best at the end of a long day when you don’t feel like cooking – juicy meat with a loaf of fresh bread, mustard and some lettuce.  Delish!  Or chicken with mash and gravy…mmmm….And much, much quicker than roasting a whole chicken or side of pork yourself at home. 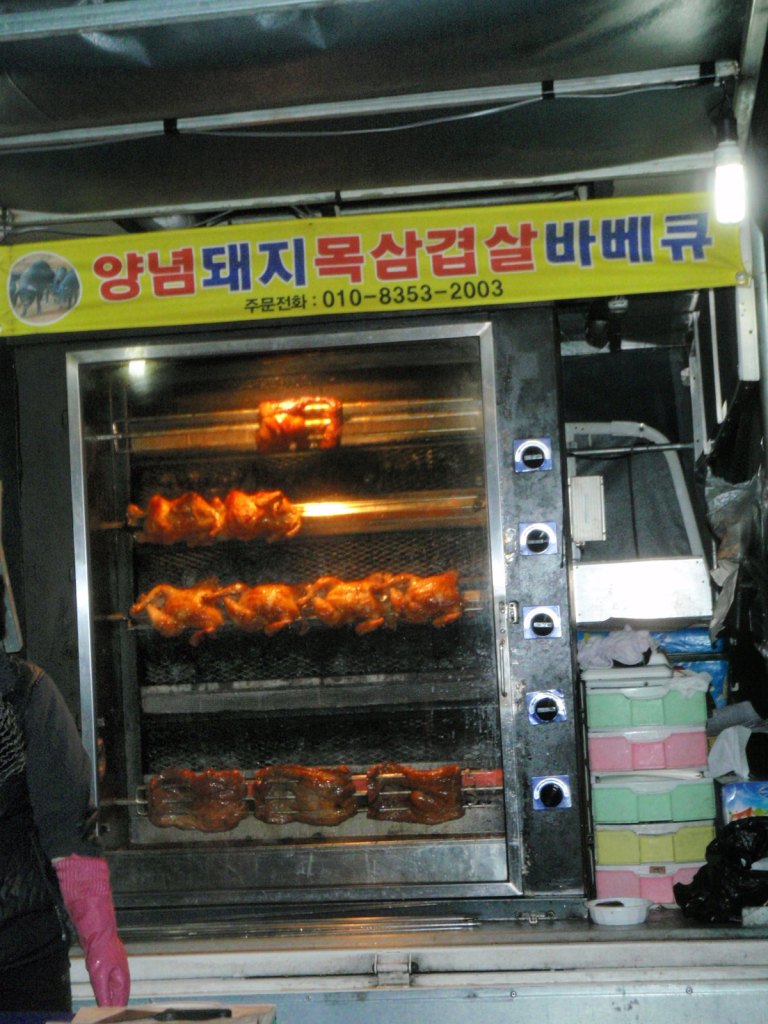 If you can’t be bothered leaving the house at all, well, that’s okay too.  Everywhere delivers.

And each time they do they leave a magnetic business card on the door of each apartment in the block they’re visiting.  We’ve amassed quite a number of these by now which we’re using to create a collage on our fridge, haha.

Sadly, due to our minimal language skills ordering by phone is not something we’re quite capable of as yet.  However, we have worked out a system with one local place…Introducing one of the tastiest and most popular types of food in Korea – the Chinese takeaway! 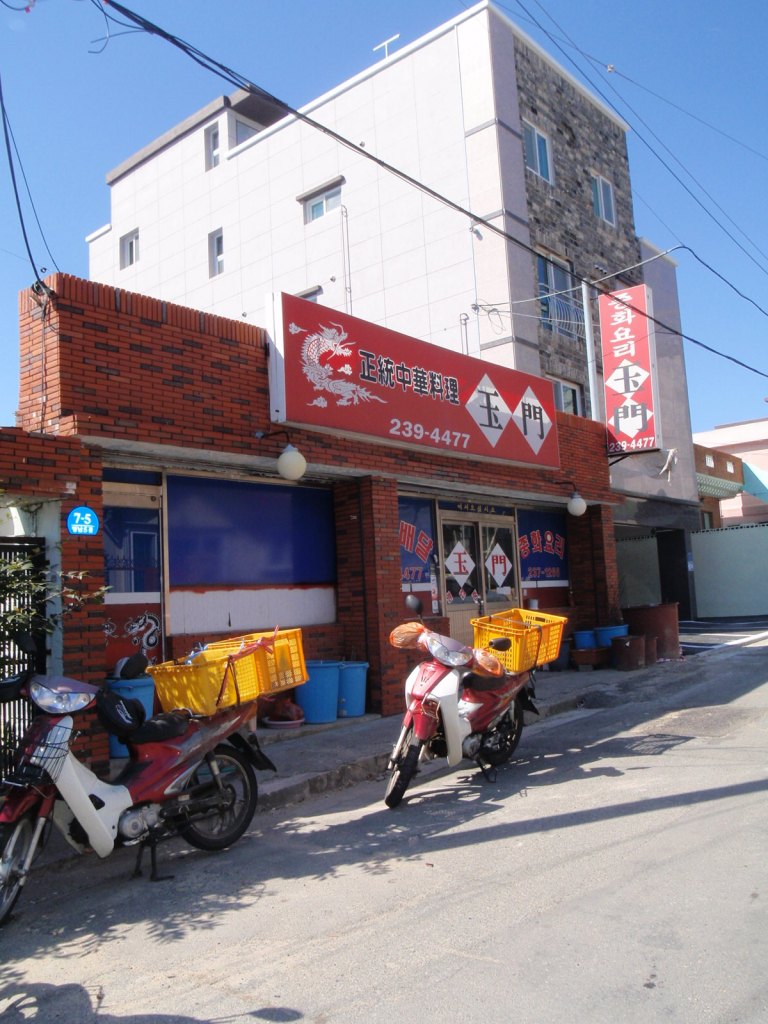 Yes, it has battered sweet and sour pork, just like every other Chinese takeaway in the world (other than in China where food remains less bastardised!).  Perhaps the dish closest to Korea’s heart though is 짜장면 jjajangmyeon – noodles in a black bean style sauce.  It’s frickin’ delicious, delightfully simple comfort food at its best.

Alternatively, you can order the same sauce over fried rice, topped with a fried egg.    This dish is called 짜장밥 jjajangbap.

This particular establishment specialise in a wonderfully spicy seafood soup.  It gives Dan the hiccups, without fail.  Sadly, this picture doesn’t really do it justice but trust us on this.  Its a fiery bowl of red broth with a stack of clams, squid and crunchy vegetables lurking tantalisingly just beneath the surface.

But back to the delivery – for the paltry sum of ₩18,000 comes enough food to feed a small army, delivered to your doorstep, piping hot and on proper crockery.  When you are done, you simply leave the dirty crockery outside your apartment door where the delivery folk whisk it away early the next morning.  Awesome. 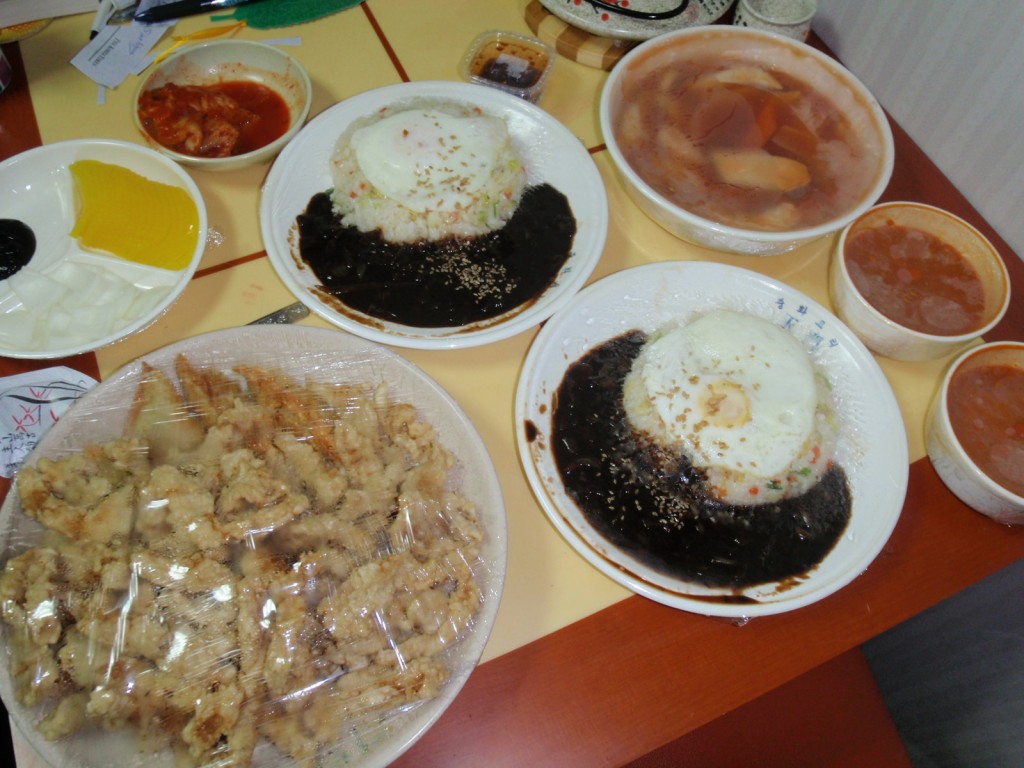 That’s a gigantic plate of  탕수육 tangsuyuk, the Koreanized version of sweet and sour pork (with a large bowl of sauce comes in a seperate container so it doesn’t get soggy – how considerate is that?!); two plates of 자장밥 jajangbap, two bowls of the delectable seafood soup, a bowl of kimchi, a plate of fried mandu, and a plate of pickled radish, raw onion and black bean paste for dipping.  Now that’s value!

If all of that is too much, there is a further option both extremely cheap and readily available.  In fact, we would even go as far as to say that this next dish is one of the favoured staples of the Korean diet…

Noodles from the corner shop.

Every convenience store in Korea has a large variety of noodles for sale as well as an urn of boiling water and plenty of chopsticks and napkins.  You can dine in, or as Dan has done below, cook the noodles instore and enjoy some of the sunshine on the stoop outside.  The whole experience will cost you between ₩600 (around NZD 60 cents!) and ₩2000 if you’re going for a super flash model of instant noodle.

Eating pot noodles does create a strange flashback to days as poor university students.  But as they say, when in Rome…!