When wandering around Busan on a day’s exploration mission, inevitably somebody just has to use the loo. The thing that we quickly discovered in South Korea is that the cleanest, most well-maintained and sparkly toilets are always in the department stores.

We were cruising the subway on our way to Haendae beach when we remembered that somebody had told us that there was a department store at the Centum City stop. Being the intrepid explorers that we are, we were thought this might be a good time to check out a new area with a side mission of finding a department store with a nice loo.

Walking through the subway were found a huge lobby type area with a very Romanesque statue calling itself the Lotte Trevi Fountains!

We started to realise we had walked into something epic…Shinsegae Centum City, literally the biggest department store in the world!

Upon stumbling into this entranceway of gargantuan glossiness, we located a sign that explained that there was a big Lotte Department store to one side, and in competition beside it the Shinsegae store.  Having already seen a number of different Lotte stores by this stage of our adventures in Korea, we headed into the unknown and into the extremely styley entrance of Shinsegae.

One thing that Korea definitely excels at is the art of retail. The Shinsegae mall has 14 floors above ground and four below ground. Apparently it cost 1.025 trillion won ($2.1 billion NZD) to build.  It has a huge 293,905 m² of retail space with more features that you can shake a stick at.

There are, of course, shops galore.  As per most department stores in Korea, the ground floor is full of all the expensive brands that the likes of us, cannot afford.  But like to drool over.

There is a really, really, REALLY big bookshop with a pretty decent foreign section.  Oh and stacks of the overly cutesy stationary supplies that Korea loves so much.

There are different levels dedicated to specific types of clothing, such as women’s wear, sports wear, men’s wear, children’s wear and youth wear.

There are also entire levels dedicated to homewares, electronics, shoes.  You name it, you can probably find it somewhere in this complex.  There is also an overwhelming and slightly intimidating number of staff…

“But what else is there to do in a department store?”, we hear you ask.  It turns out at Shinsegae, quite a lot. 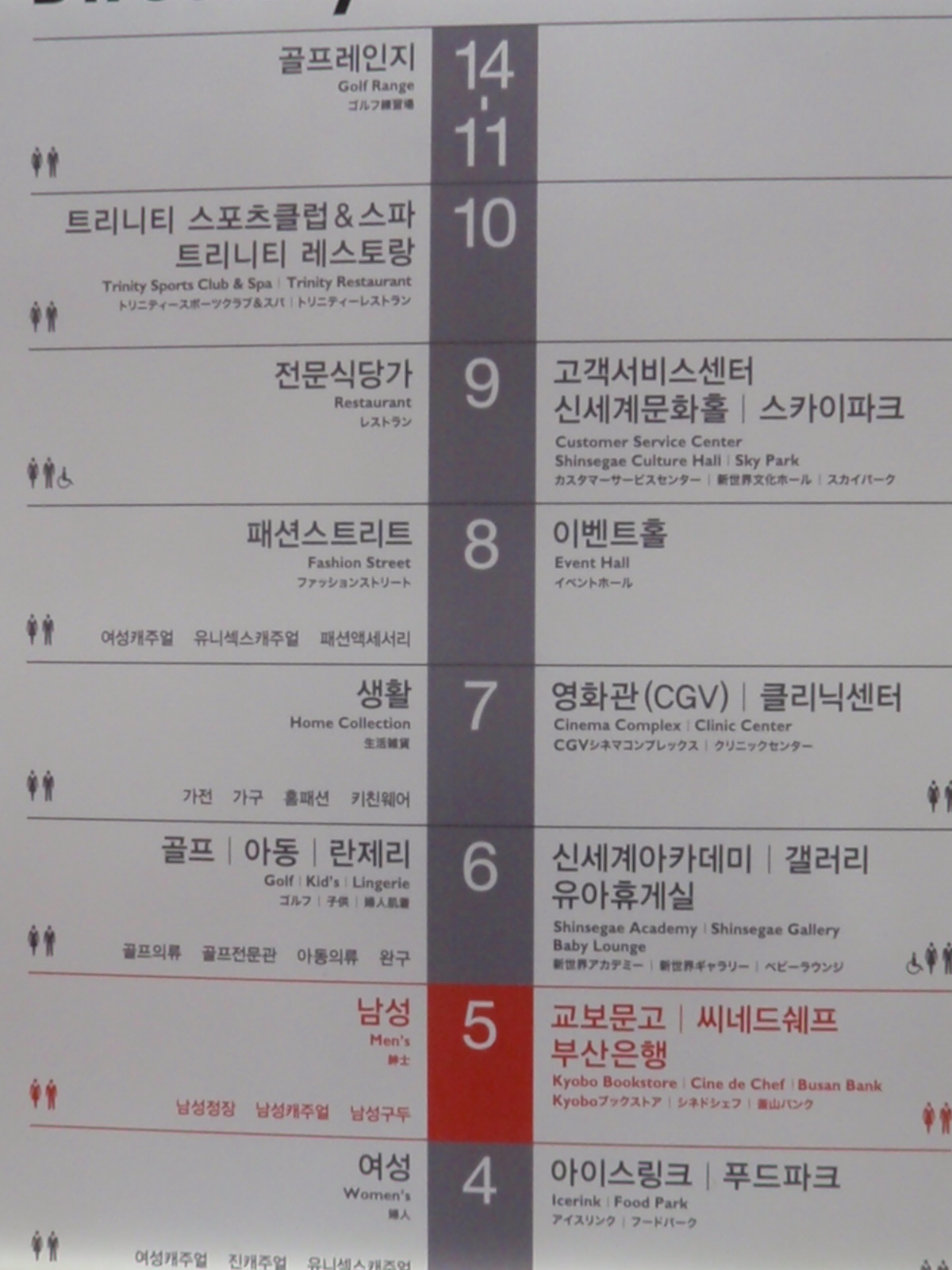 Yes, you read that right.  For the sporty spices, there is a rooftop 60 tee golf range or an ice rink.

Strangely, when we first got there no one was on the rink.

And then all of a sudden a gate was opened and a gaggle of children, together with a few awkward looking couples (first dates?) ambled onto the ice all at once, all clad in safety helmets.

No one looked like they were having much fun.  The children looked a bit like they had been sent there in order to be occupied while their parents did much more fun things (like shopping at Louis Vuitton?).  The couples struggled around stony faced and looking a bit sheepish.  This could be due to one of two things: firstly, that they were definitely in the minority of being over the age of about 14; or secondly, that the ice-skating rink is surrounded by a food court!  Diners are seated, munching on their burgers and kimchi while watching the (mostly) graceless skating.

Which leads to another feature of Shinsegae – the eating options!  The ice skating floor also features a Food Park.

At this kiosk you place your order and pay and are presented with a ticket which you then hand over at your chosen food vendor.  Very efficient!  There are the usual suspects on this floor such as Burger King, Dunkin Donuts and KFC, as well as katsu, gimbap, sushi, Chinese and Korean options.

On floors 9 and 10 are the more upscale restaurants, again with quite a wide range of types of cuisine.  But the best eating options to be found are on B1, right down the bottom of the mall.  Here, again as in many department stores in Korea, you will find the food hall together with the fresh food market.  These places are incredible – huge spaces filled with vendors cooking everything under the sun in a fast food setting. 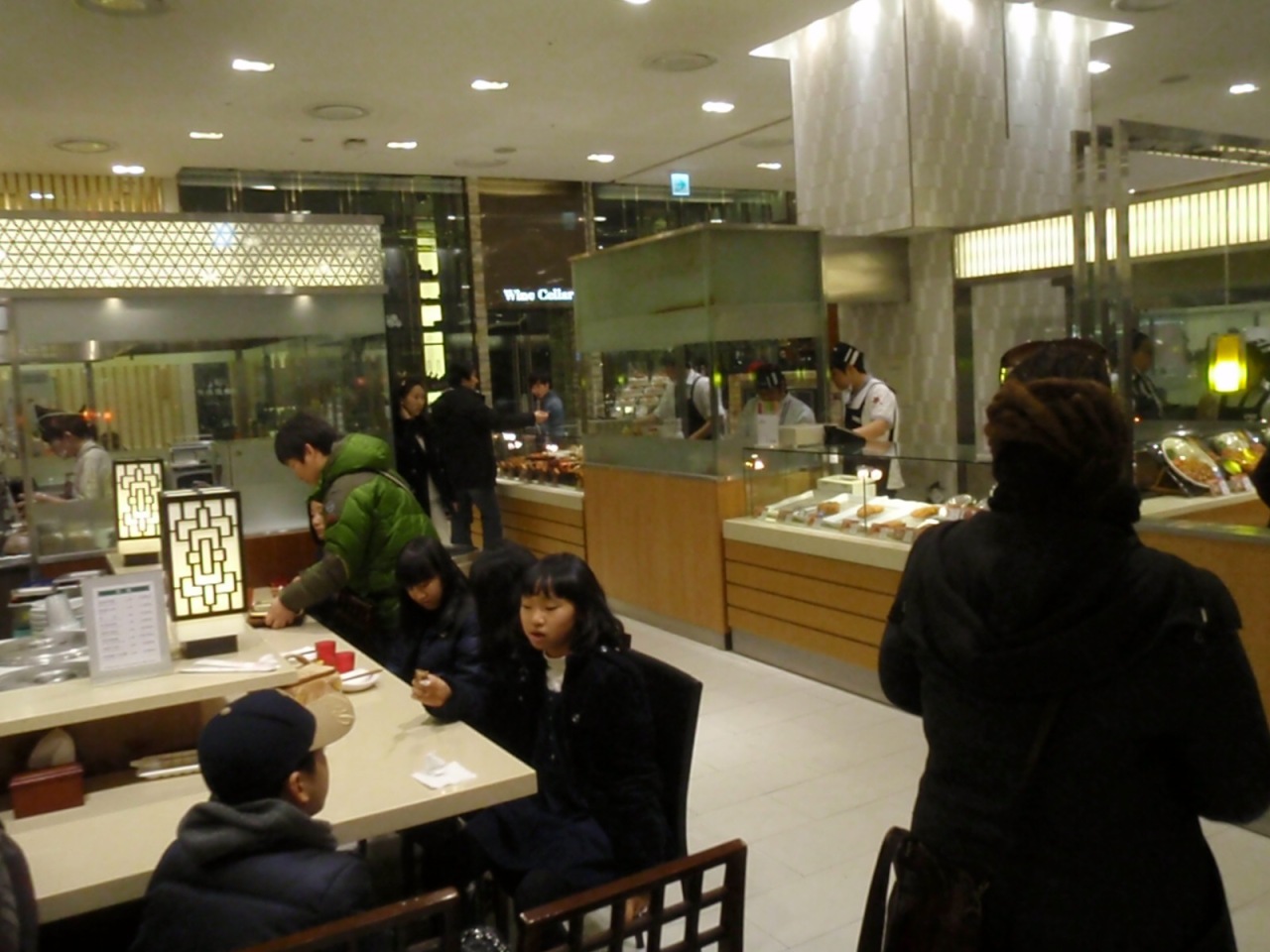 The variety is impressive.  Huge, gourmet looking katsu plates, sushi trains, noodles cooked fresh in front of you, bakeries with goods that would rival any country, New York style hot dawgs, the most delicious steamed buns filled with spicy pork and kimchi, sashimi, bibimbap…endless choices of wonderful, freshly prepared food.  This sure beats the food courts filled with franchises!

There are also numerous cafes dotted around the place for shoppers in need of a pick-me-up.  Sadly, cofffee is one of those things that STILL so many places don’t get right.  Especially when you’re a pair of utter coffee snobs.

The coffee in front is this particular cafe’s version of a macchiato. Sigh.  We won’t even get into the monstrosity behind it.  The pastries, however, were fabulous.

Spa Land is another epic feature of this mall, apparently one of the most impressive in Korea.  It has two types of natural hot springs, Korean style baths and a bunch of different treatment rooms such as the Yellow Ocher room, the Charcoal Room, the Salt room…the list goes on.  Being of the tattooed variety of expat, we haven’t experienced this part of the mall yet as many spas in Korea actually ban you from entering.

We can, however, visit the CGV multiplex cinema.  As can monks, it appears! 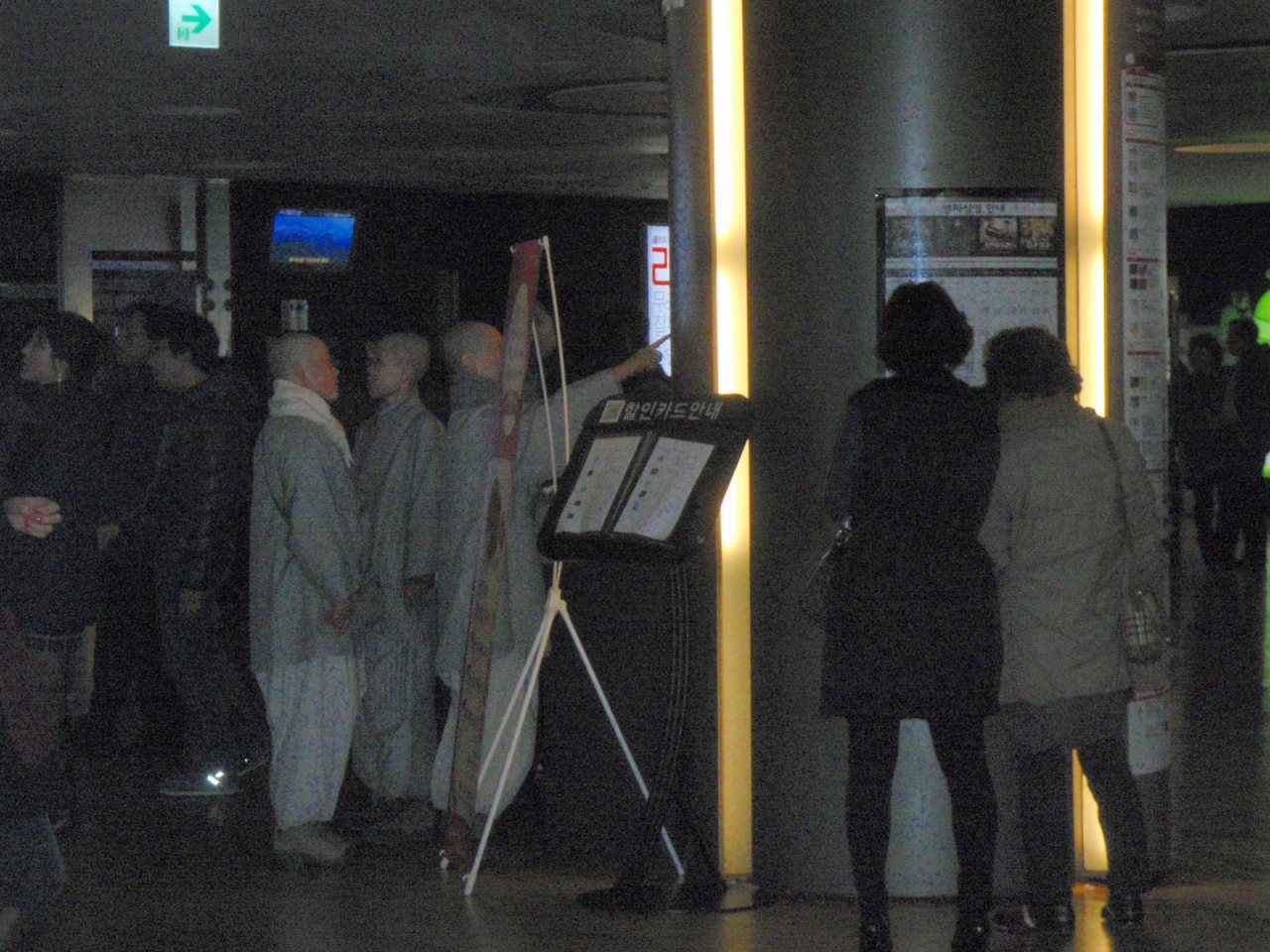 When the ability to spend money fades, the place is actually impressive enough to just wander around taking in the sights.  Seriously, the place is decked out in incredible sights left, right and centre.  There is also a free art gallery on the 6th floor that exhibits international artists.

We chose to skip the gallery this time and meander around the mall taking in the sheer scale and grandeur of the place. The floors are marble, crystal chandeliers hang from the escalator cavities and the levels all interplay to create some pretty interesting visuals… 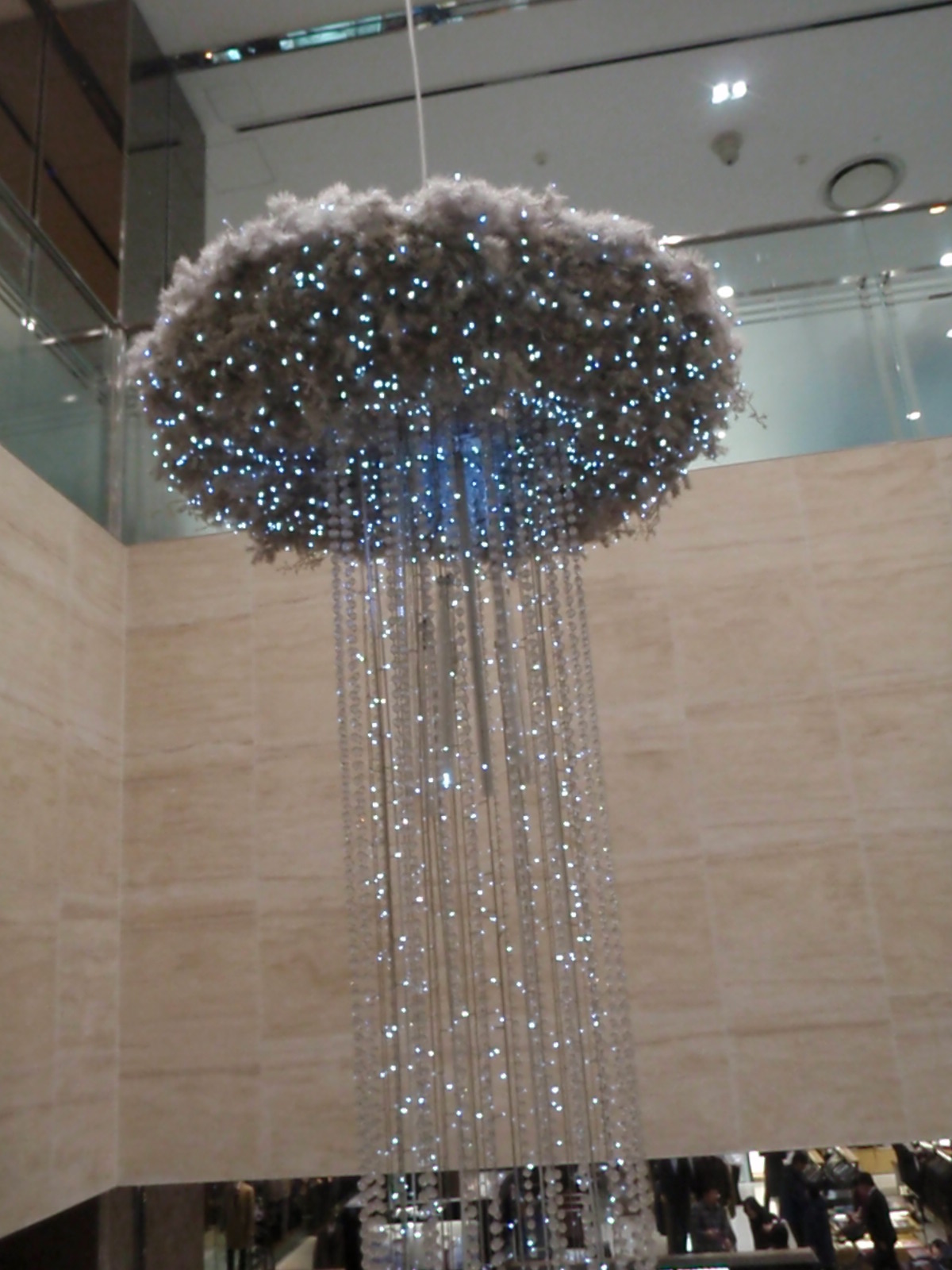 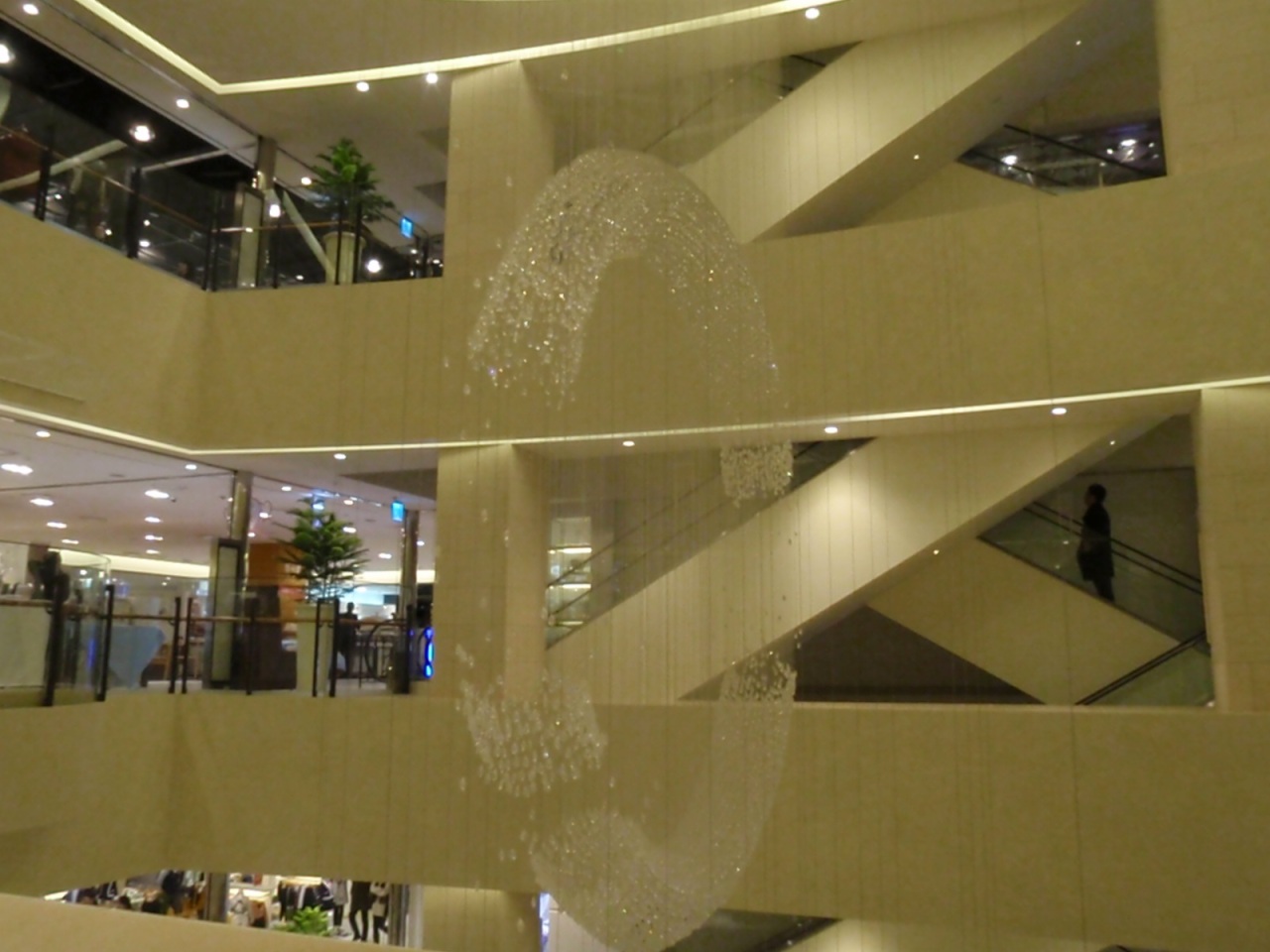 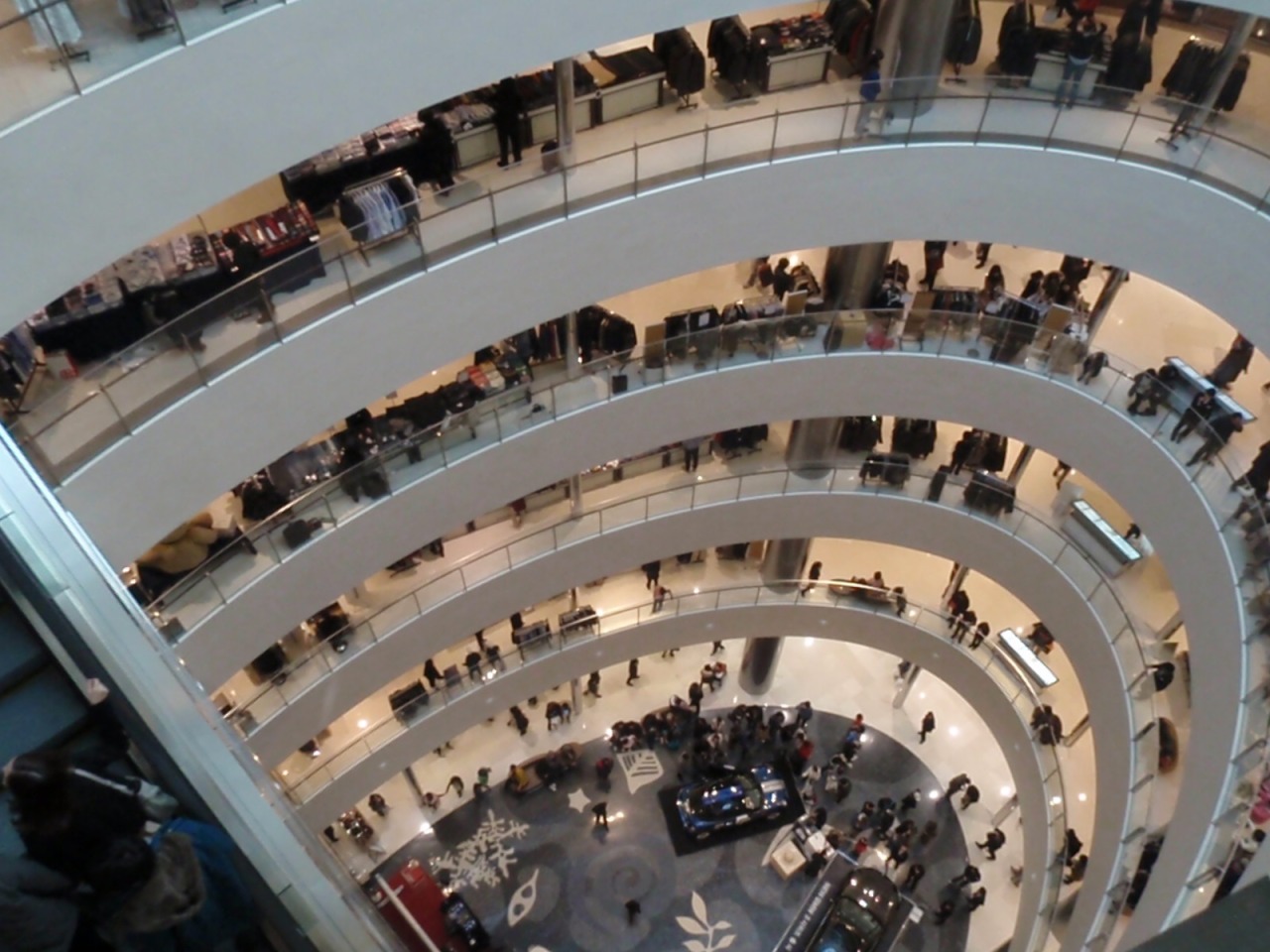 When we looked down we realised there was a break-dancing demonstration going on! 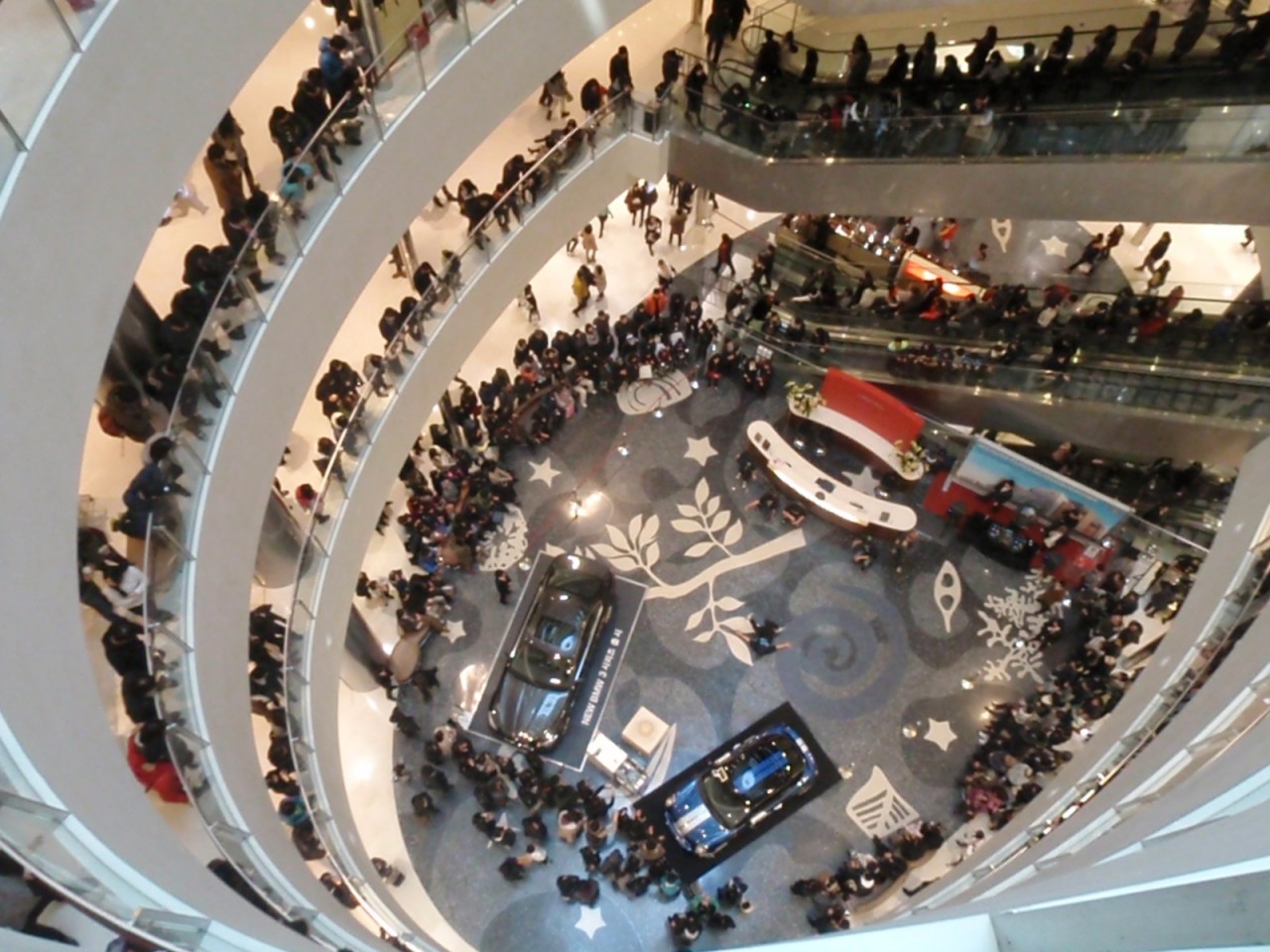 And if you look up…

Alas, walking around inside the world’s largest department store can start to feel a little overwhelming.  Thankfully, they have actually thought of everything and on floor 9 of this behemoth is an aptly named ‘Sky Park’. 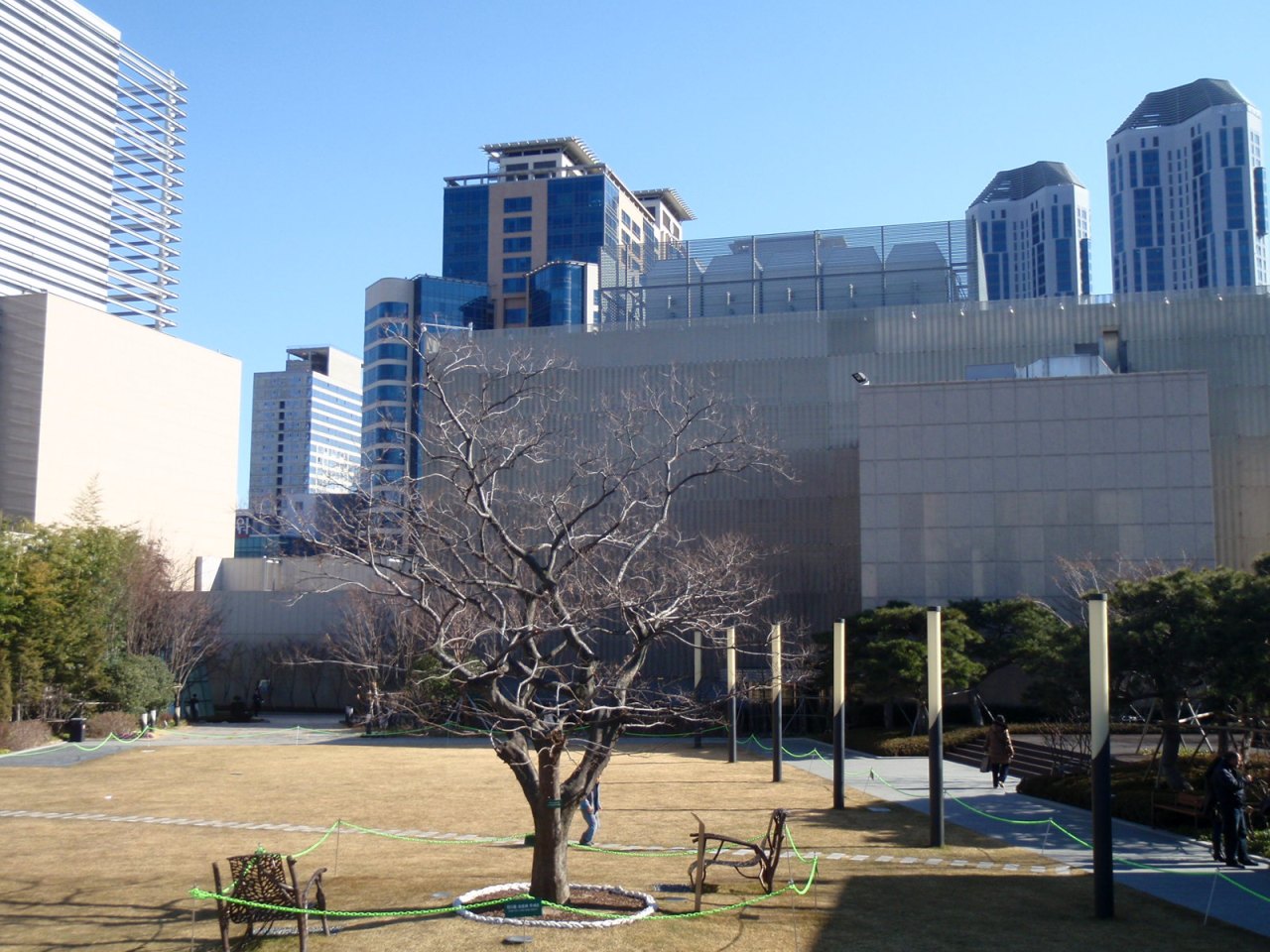 but also great views over Busan! 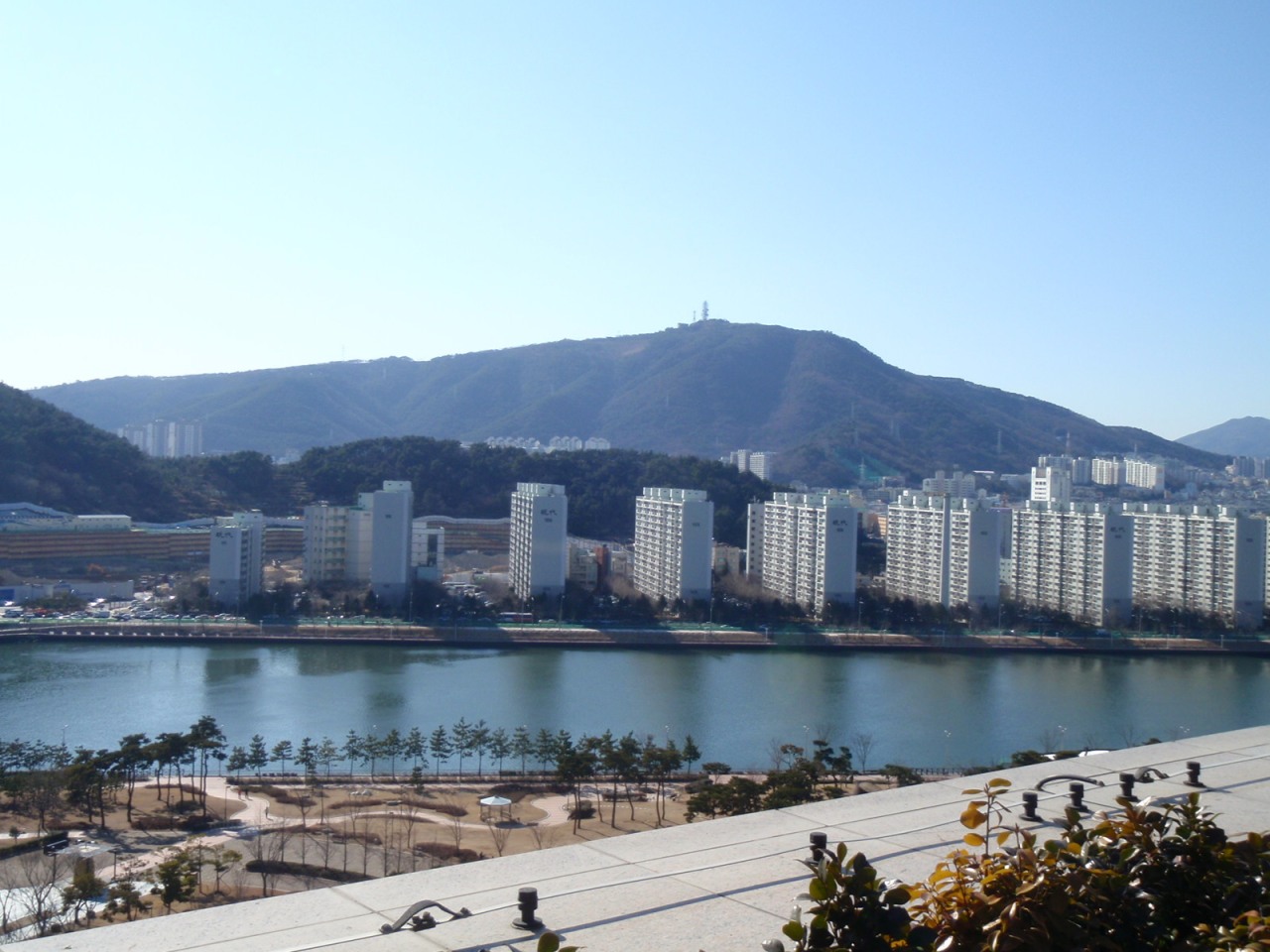 So after a day of wandering around a the biggest mall in the world, we were pooped! Speaking of that, the lavatories gained an impressive 9.8 on the Dan’s public ablutions scale. So a successful day all round.

Time to go back to the wop wops!

Disclaimer: Please forgive us for the poor quality of some of these photos – photography is not actually allowed inside this (and many other) department stores in Korea.  There are security guards EVERYWHERE…so a lot of these photos were taken ninja style.  Hehehe.