Incredible India – Where it all Begins!

For years, India has been on our must-do travel destination list.  Its one of those places that evokes sensory tantalisers of bright colours, pungent aromas and complex flavours. We had other reasons for wanting to visit – Dan’s grandfather spent some of his childhood there, as the son of gold mine boss so naturally, Dan has been keen to check out this part of his familial heritage.  H-J’s (rather useless but utterly fascinating!) degree was in religious studies, with its primary focus being on Eastern religions…(and a secondary one on cults, but that’s another story!)  Her natural geekiness when it comes to all things temple, religion and art made India pretty irresistible.

And then, one day way back in 2007 we met a friend, Ushma.  Ush and H-J immediately hit it off and, as it does, the conversation drifted quickly to their mutual desire to travel to India.  Ushma’s family are ethnically Indian but having been born in Kenya, raised in England and then resident in New Zealand, had never managed to quite get to India.  A flippant plan was made in these early days…”Let’s go to India together.  2012 work for you?”.  Of course, at the time 2012 seemed so far in the future that it was one of those plans you can make without any real intention of doing much to make it happen, more a ‘if it happens, it happens’ kinda scenario…

Well wouldn’t you know it, early 2012 both halves of the deal suddenly found themselves in a position where it didn’t seem that far fetched.  Discussions were had, dollars were saved, a trip was booked and before we knew it, October rolled around and we were flying into New Delhi – Ush from New Zealand and us from Singapore.

The anticipation was high.  Dan was pensive, H-J a little apprehensive.  We were under no dis-illusion that India, while alluring as hell, was also going to be challenging and unlike anywhere we’d ever travelled to before.  We had a pretty ambitious itinerary, wanting to cover a lot of ground in our adventure so booked the majority of the trip to take place through Intrepid Travel.  The meeting point was the Hotel Perfect in Karol Bargh, central Delhi so off we sped through the crazy traffic of Delhi to meet up with Ush and begin our India Adventure.

The traffic, the beggars wandering up to the car window, the masses of people…we expected all that stuff, of course.  But the reality is full on, to say the least.  Upon arriving at our hotel, down a back alley in the middle of gods knows where (well, at least we didn’t have any idea) we were ushered into our room in a whirlwind.  And we were here.  Delhi.  In all its glory.  We quickly located Ushma’s room and after hugs and squeals of joy in being reunited after a year we all suddenly had the same thought – what the hell had we gotten ourselves into?  This place seemed nuts.

The next morning we awoke and peeked out our window to see what was what. 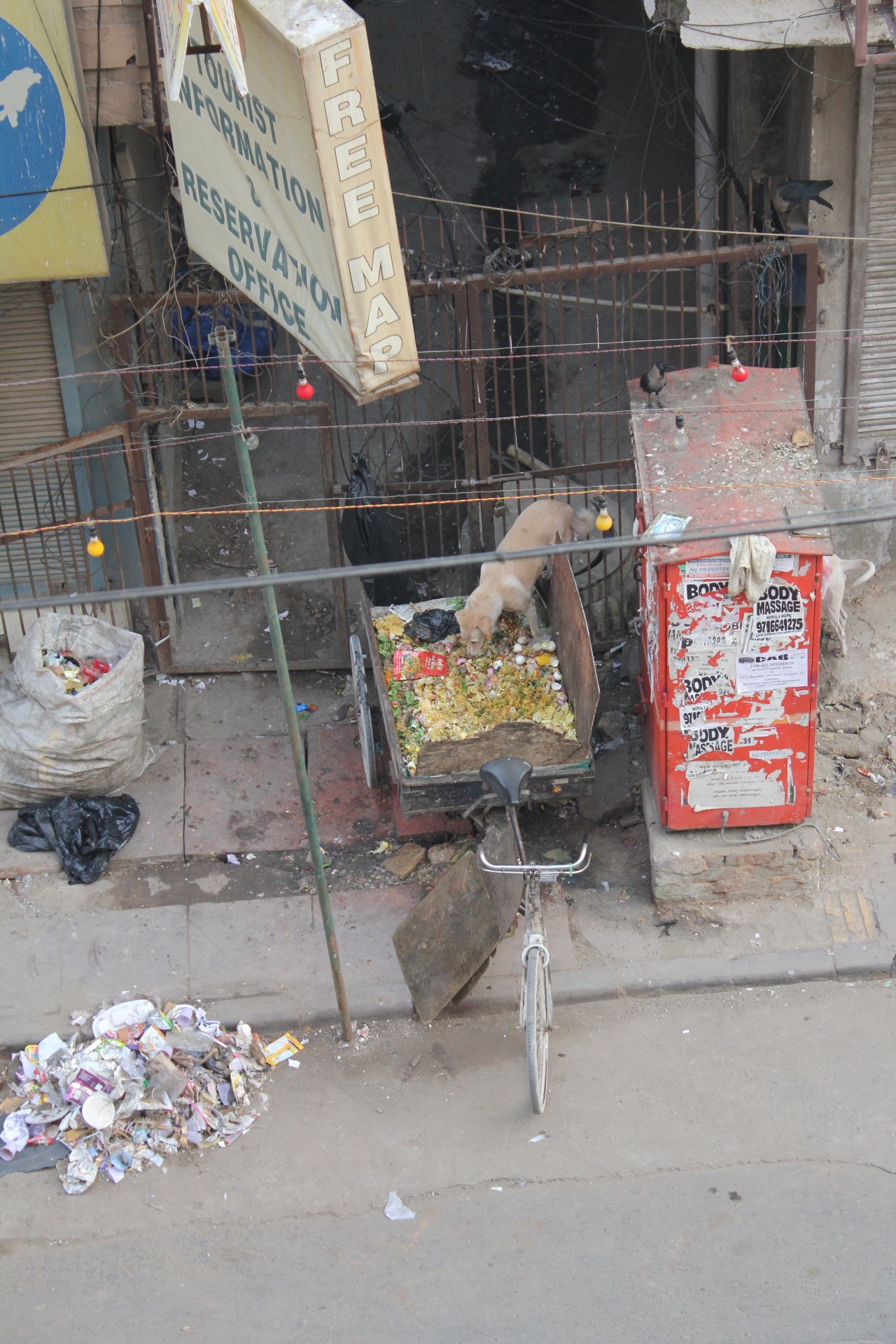 Mmm dogs eating piles of trash.  Nice touch.  Oh well, we thought, off into the streets to find what lay beyond our four walls.  It was fairly early in the morning and actually very quiet in the streets of Delhi at this time. 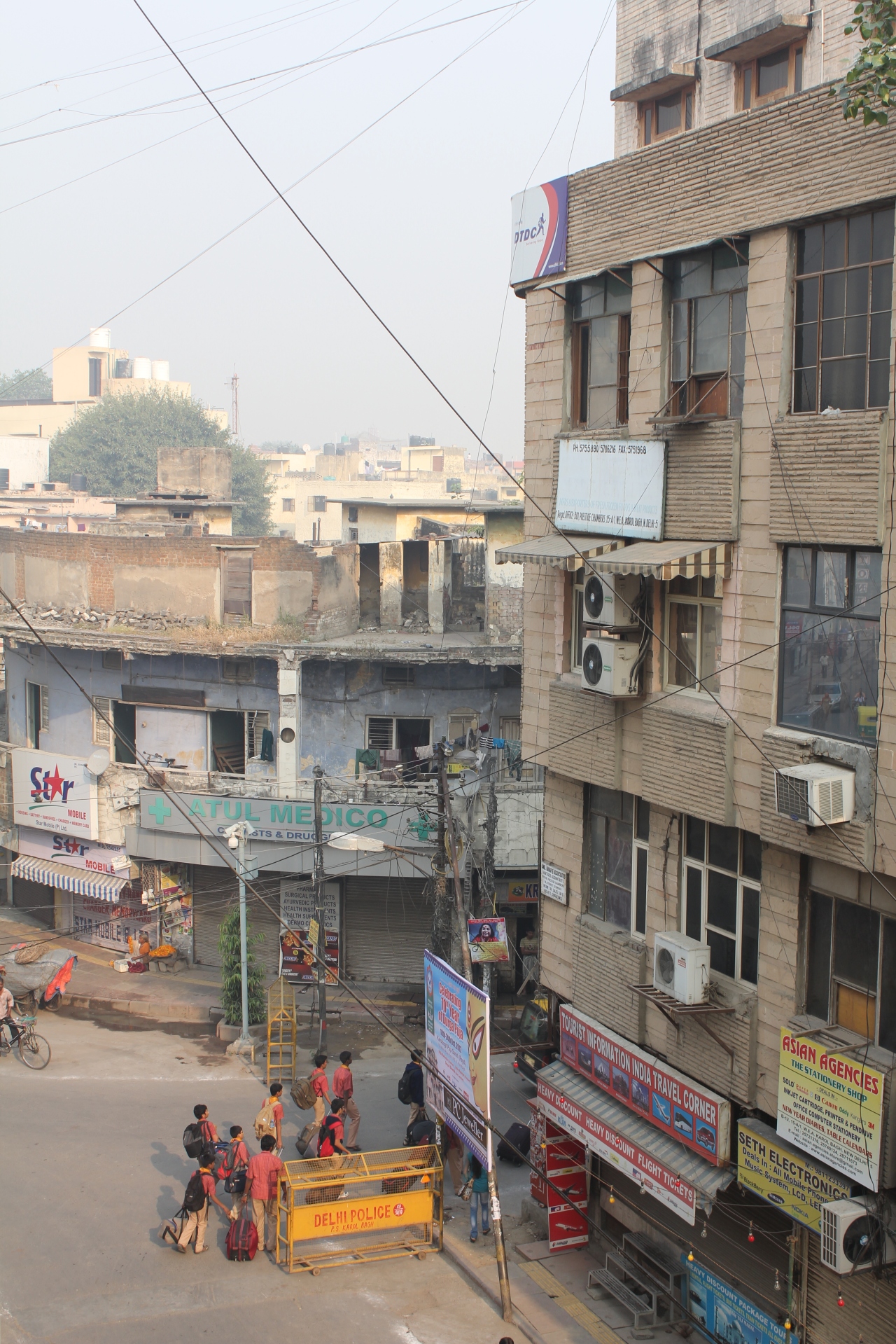 But, as we would quickly learn, it would not stay that way long! 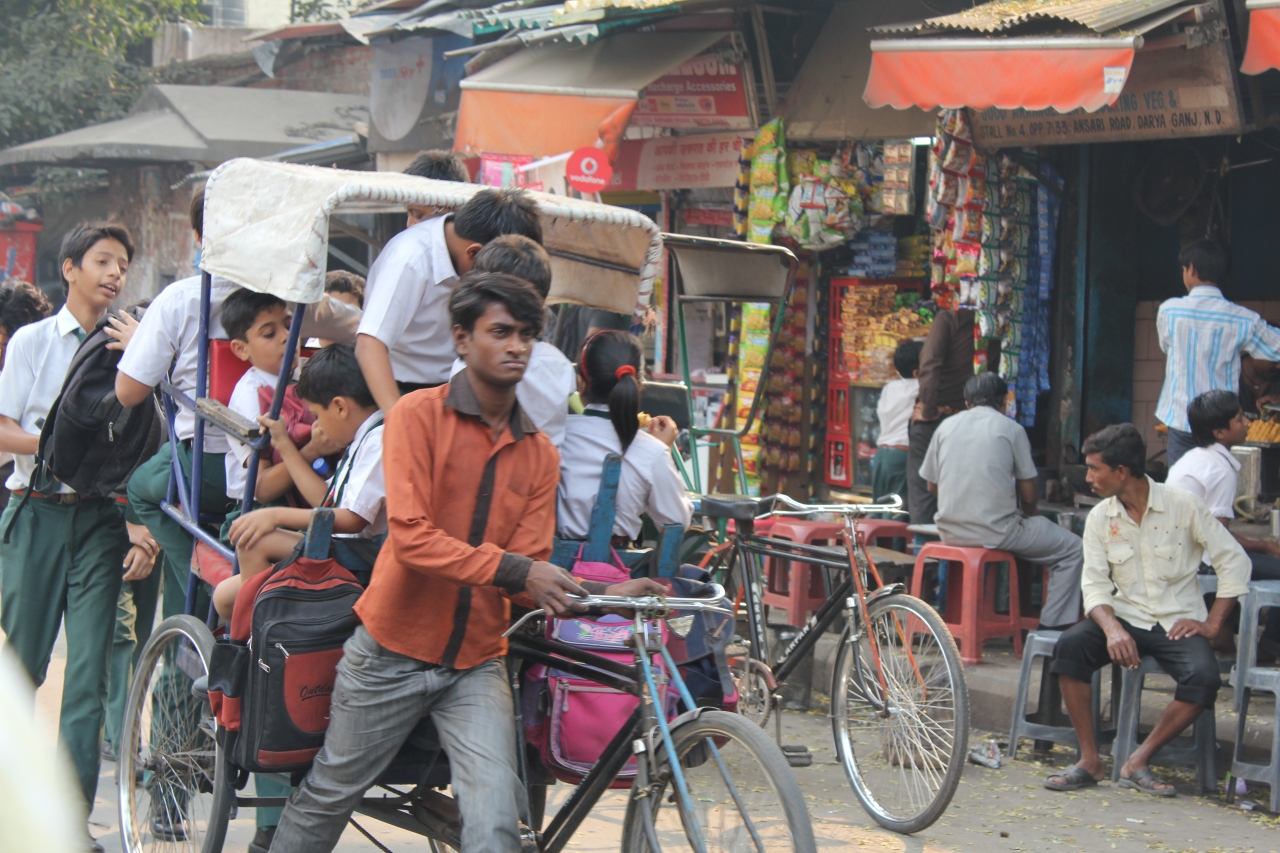 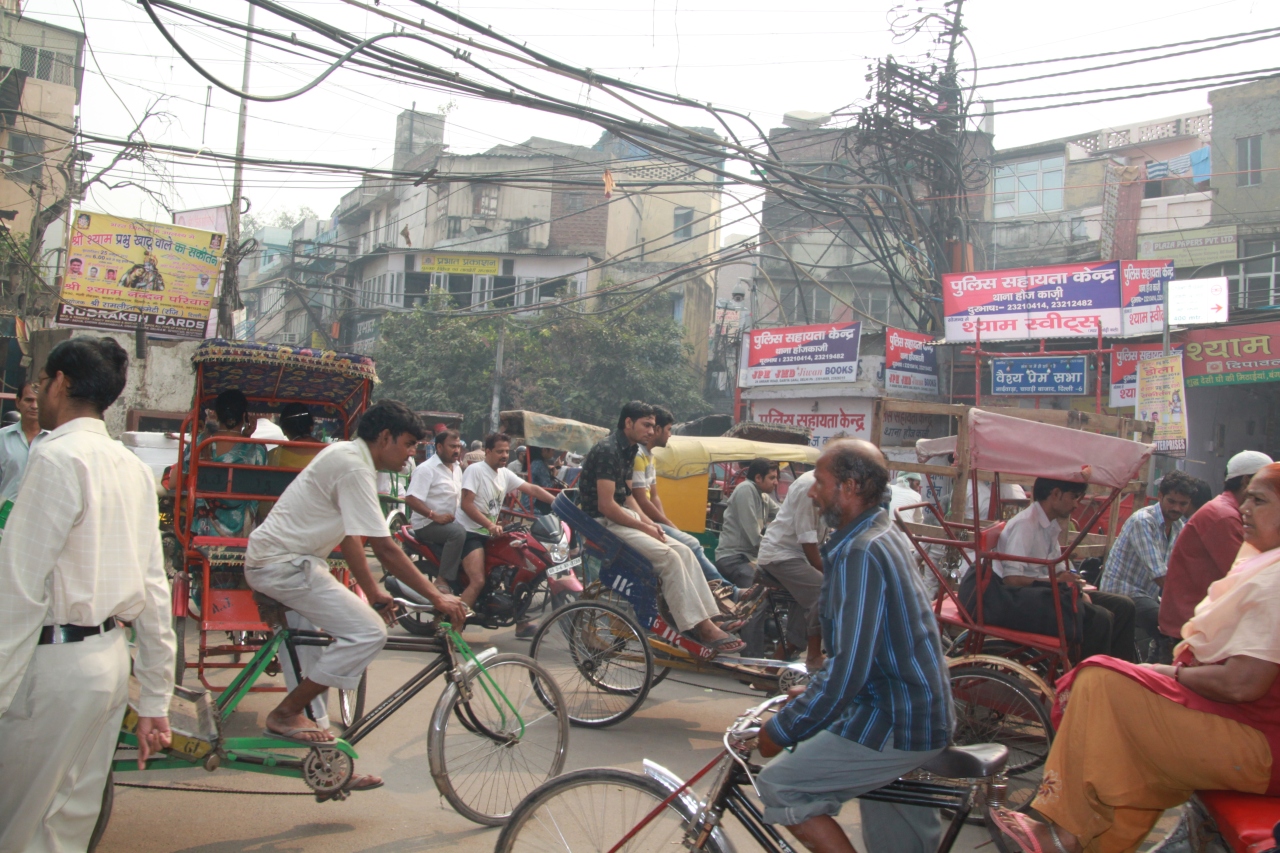 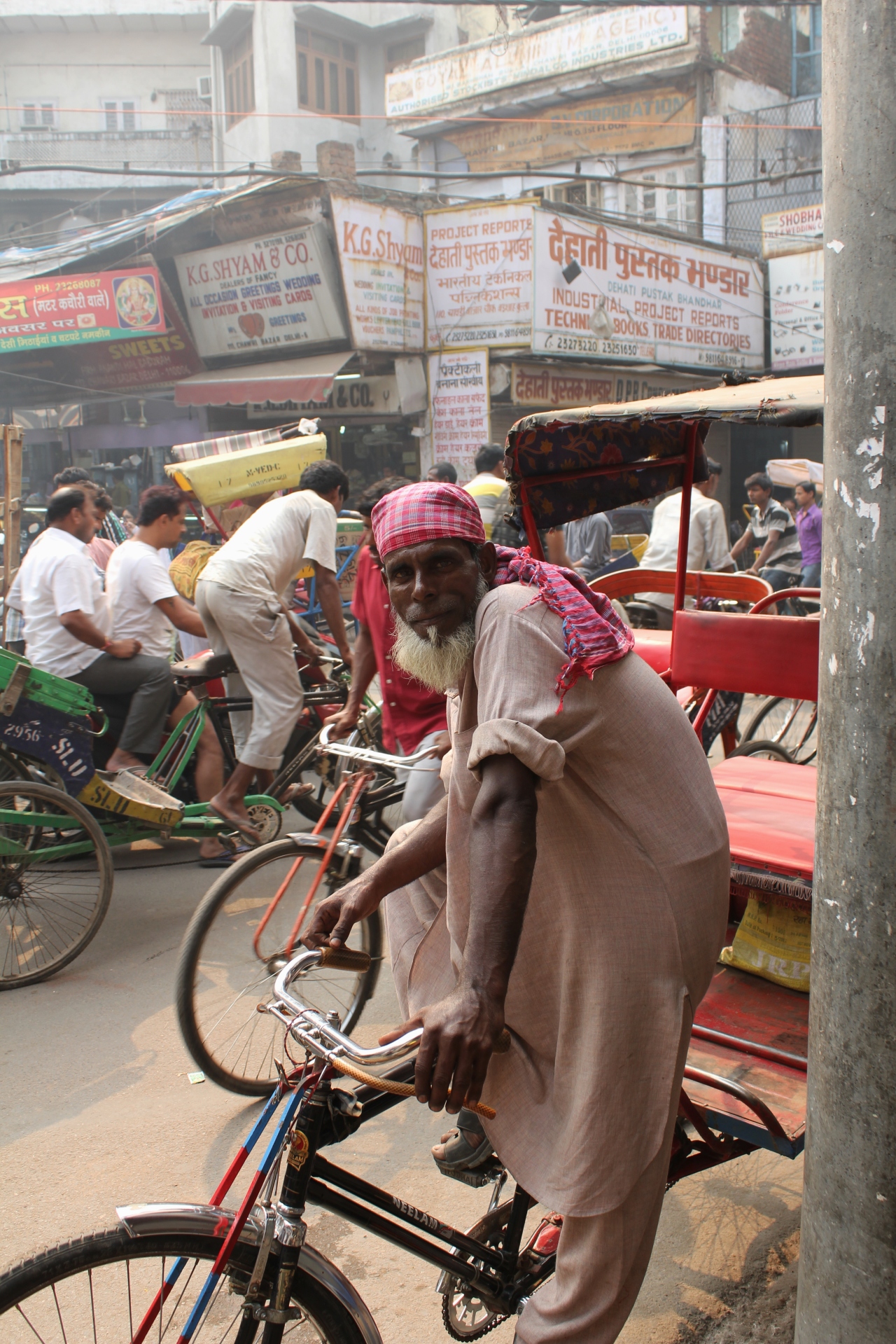 Sure enough, awesome food began to appear piled in glorious abundance all around us.  The smells of cooking were incredible, though as anyone who has been to India knows, have rather a lot of other smells to compete with. 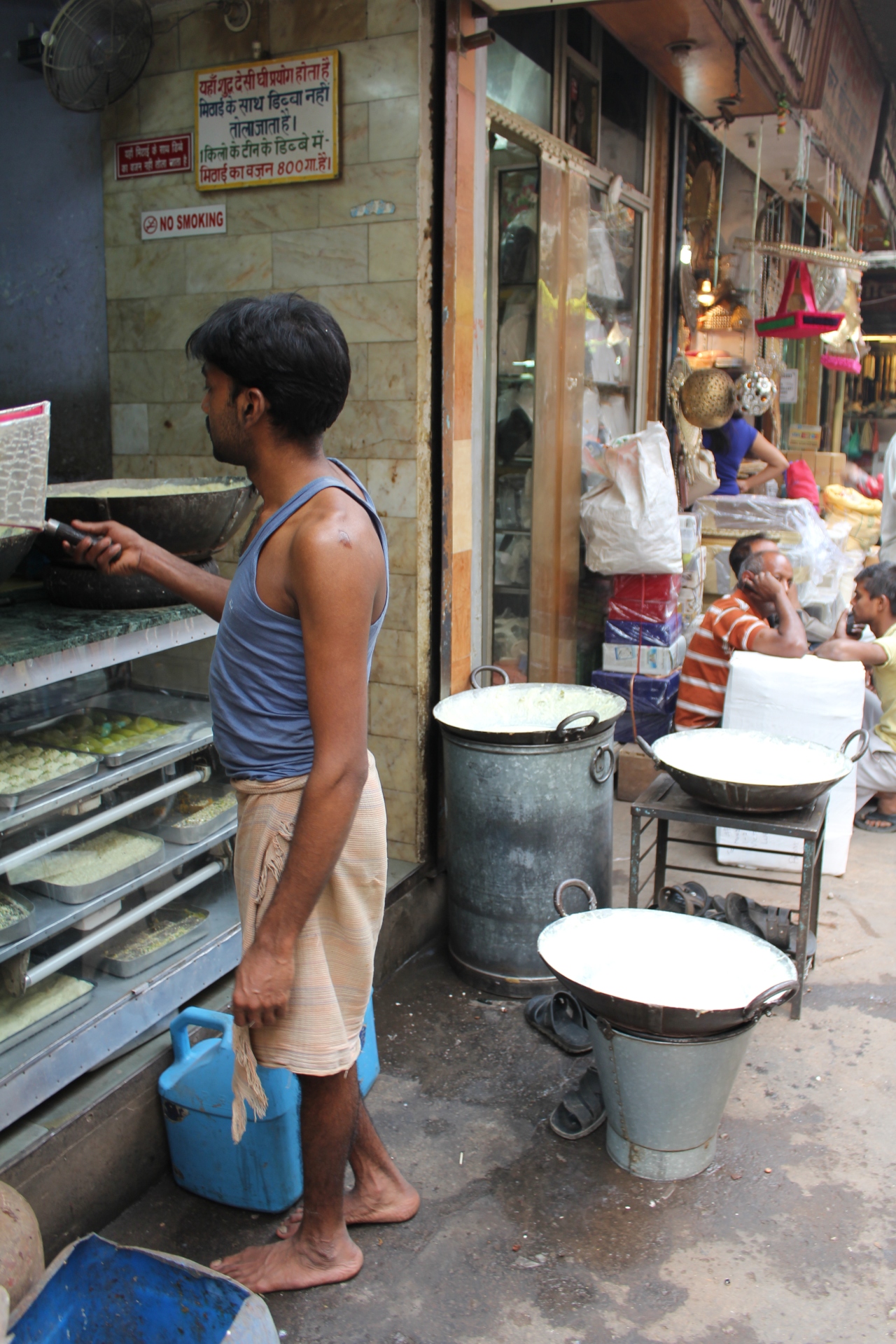 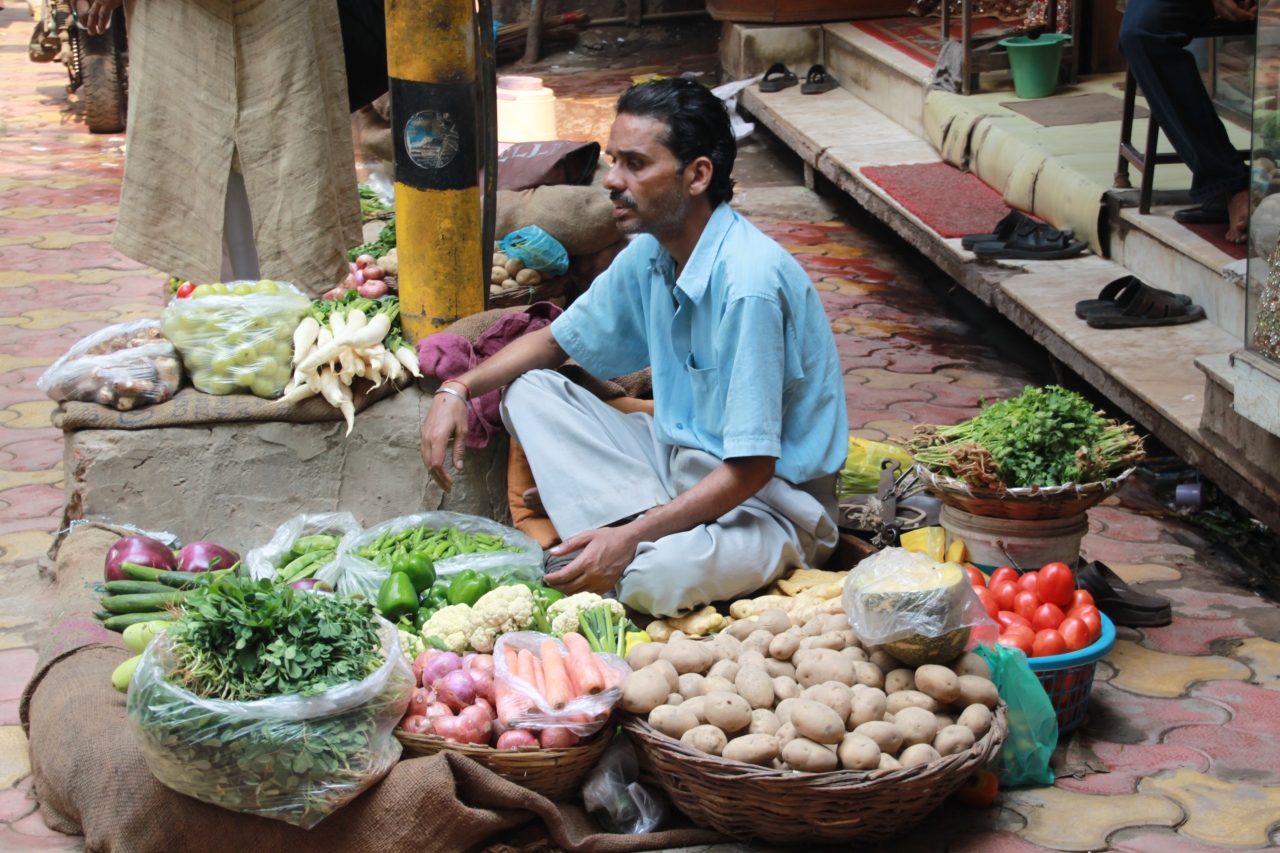 First stop for the day was the gorgeous mosque, Jama Masjid.  The name refers to the weekly Friday noon congregation prayers of Muslims and the courtyard of this whopping beauty can hold up to twenty-five thousand worshippers!  Wikipedia also kindly informs us that the mosque also houses several relics contained n a closet in the north gate, including an antique copy of the Koran written on deer skin.  However, while awed by the loveliness of this site, we were still a bit shellshocked by Delhi at this point so neglected the finer details of our visit. 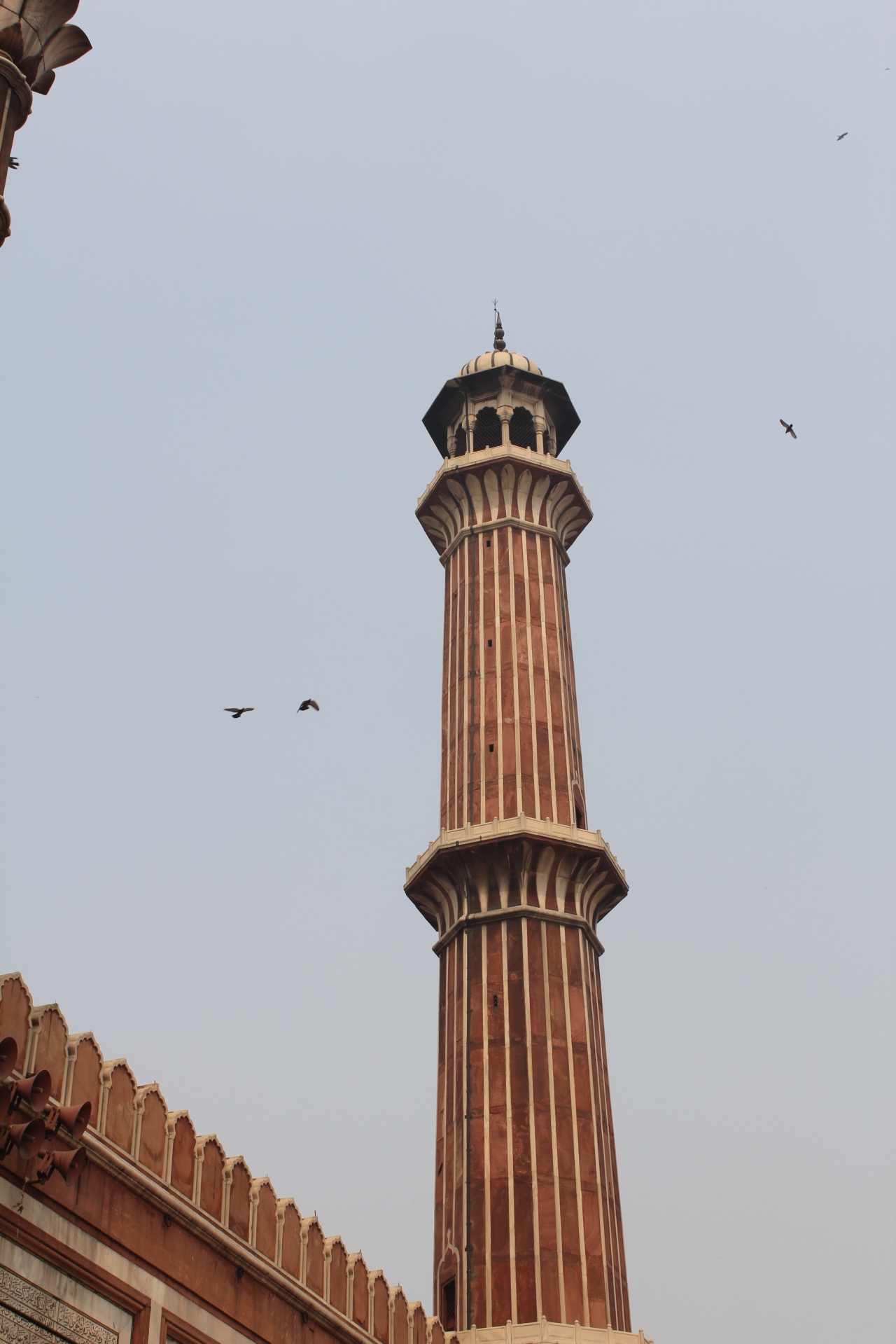 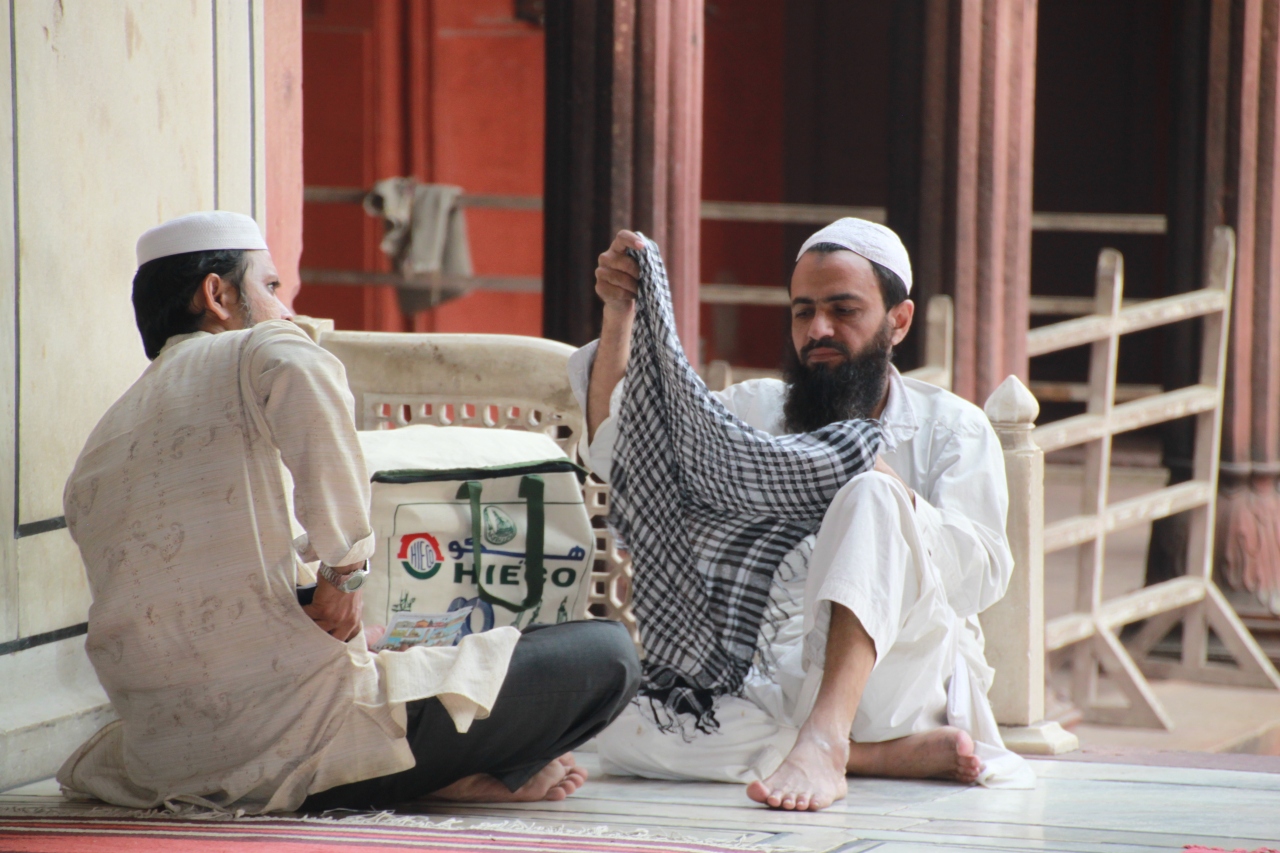 Now being that we were tourists dressed for hitting the dusty pavements of Delhi, our attire was not quite mosque ready.  Luckily, we were provided with large, super colourful mumus to slip on over our outfits.

Of course, being dressed in these stylish ensembles, as well as the fact that we were seemingly pasty giants compared to these delicate, golden creatures, we were lined up for what were to be the first of many thousands pictures (both permissed and renegade) of the trip.

Back to the mosque.  It really is a stunning piece of architecture. 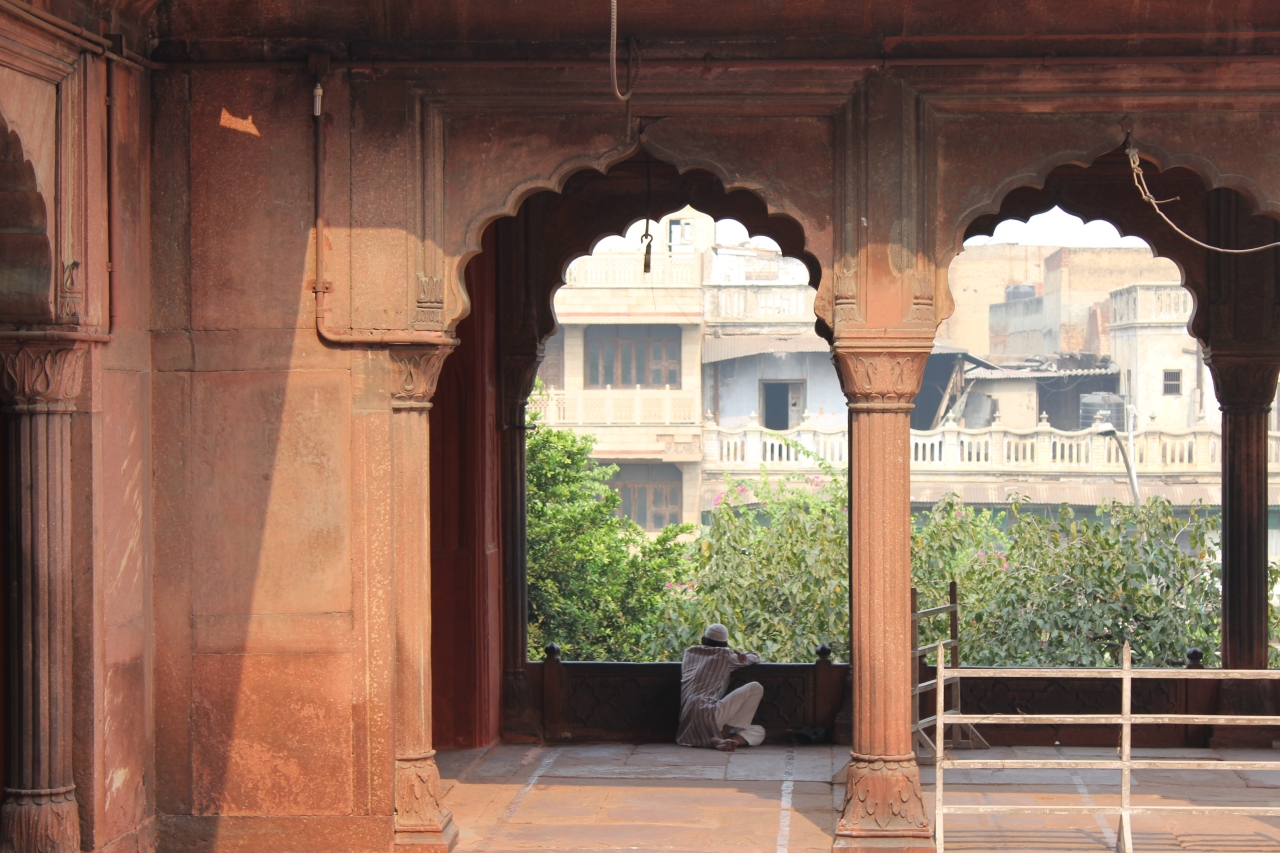 After the sanctuary of the mosque, it was time to brave the slightly more bustling alleyways that make up the area known as Old Delhi. 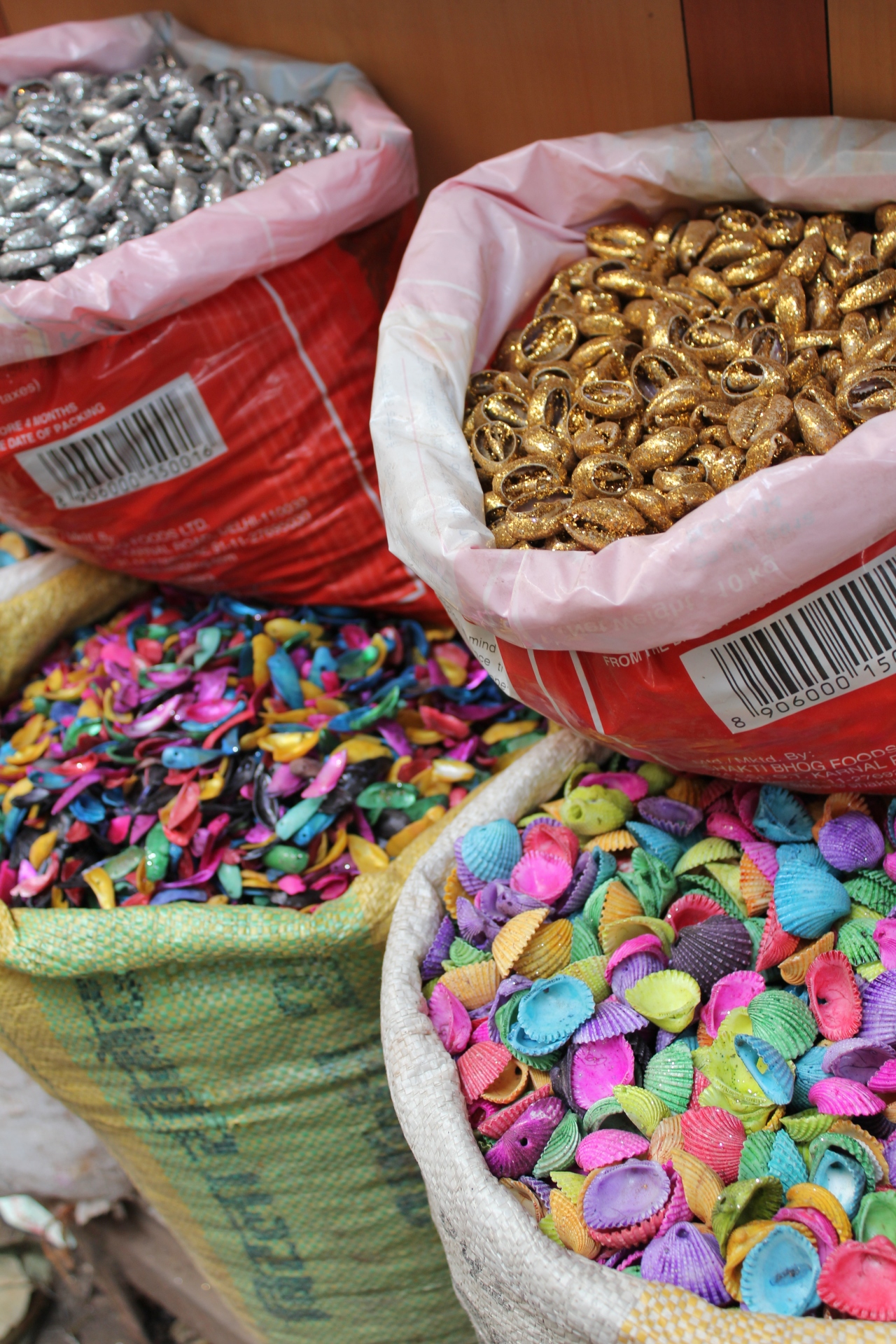 All this activity was making us thirsty so our attention turned to what was to be one of the first, and actually what ended up being one of the best, chai of our journey.

By this stage of our day, you’re probably starting to wonder whether we were hungry, right?  Well, yes, so off to lunch at a restaurant in the aptly named Paranthe wali Gali – literally, “the bylane of fried bread”.  That’s our kinda street name!

Next stop for the day was at a Sikh temple in the area.  It was an amazing place, part temple, part what we can best describe as a community centre – hundreds of people working together, worshipping, cooking.  Dan felt right at home in amongst all the gangsta beardy dudes!

Of course, we were utterly fascinated by the gigantic food production stuff! 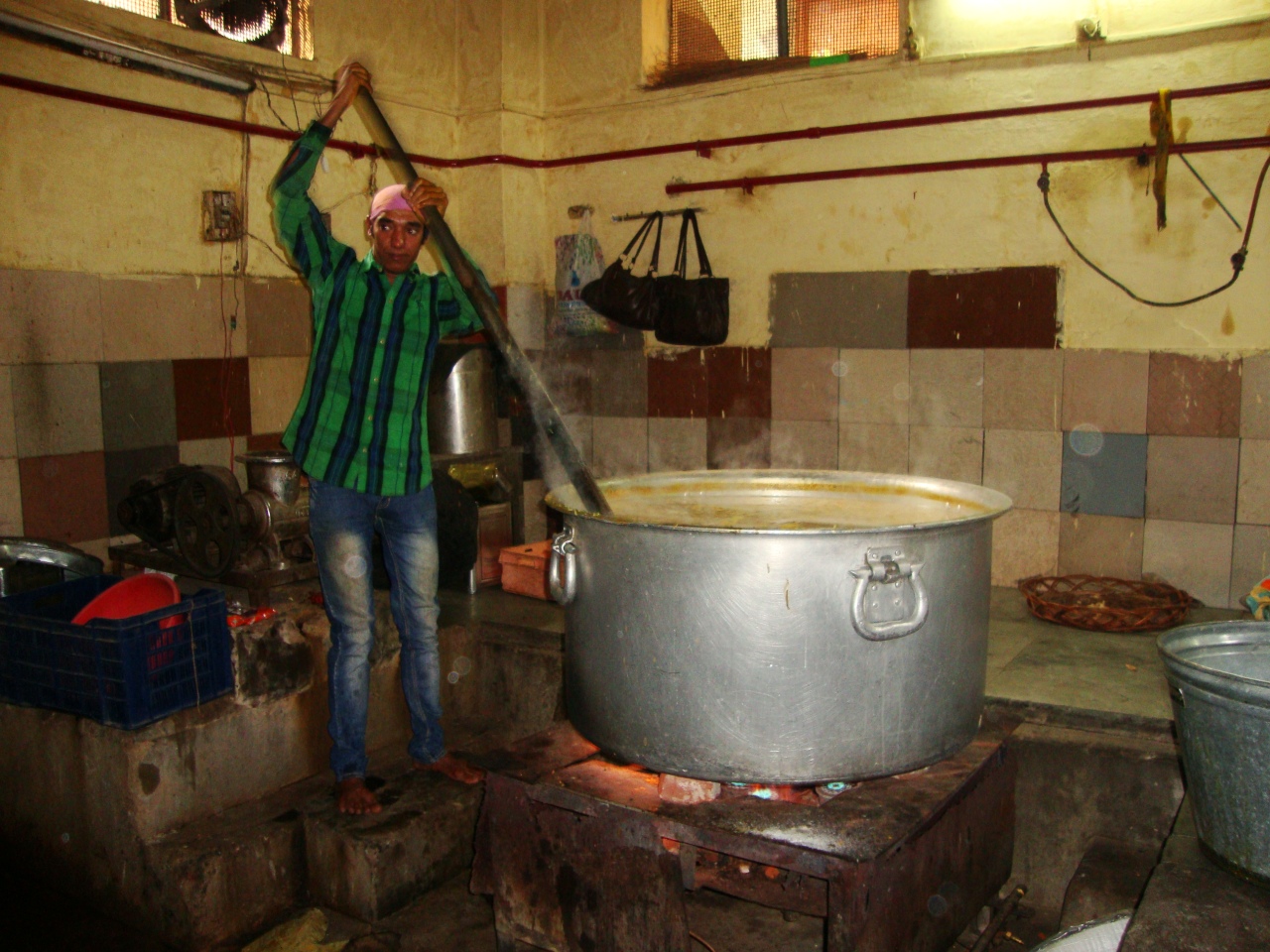 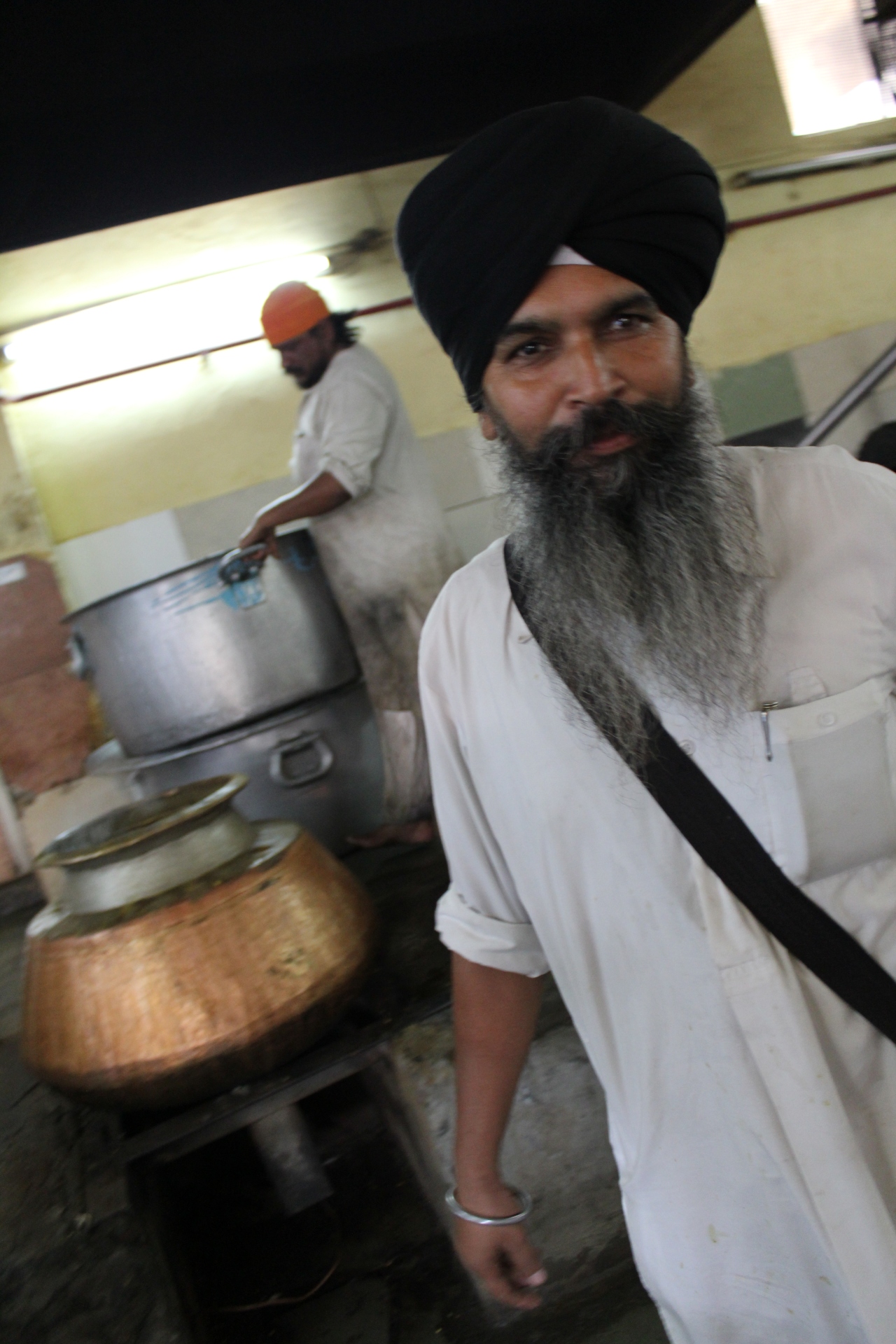 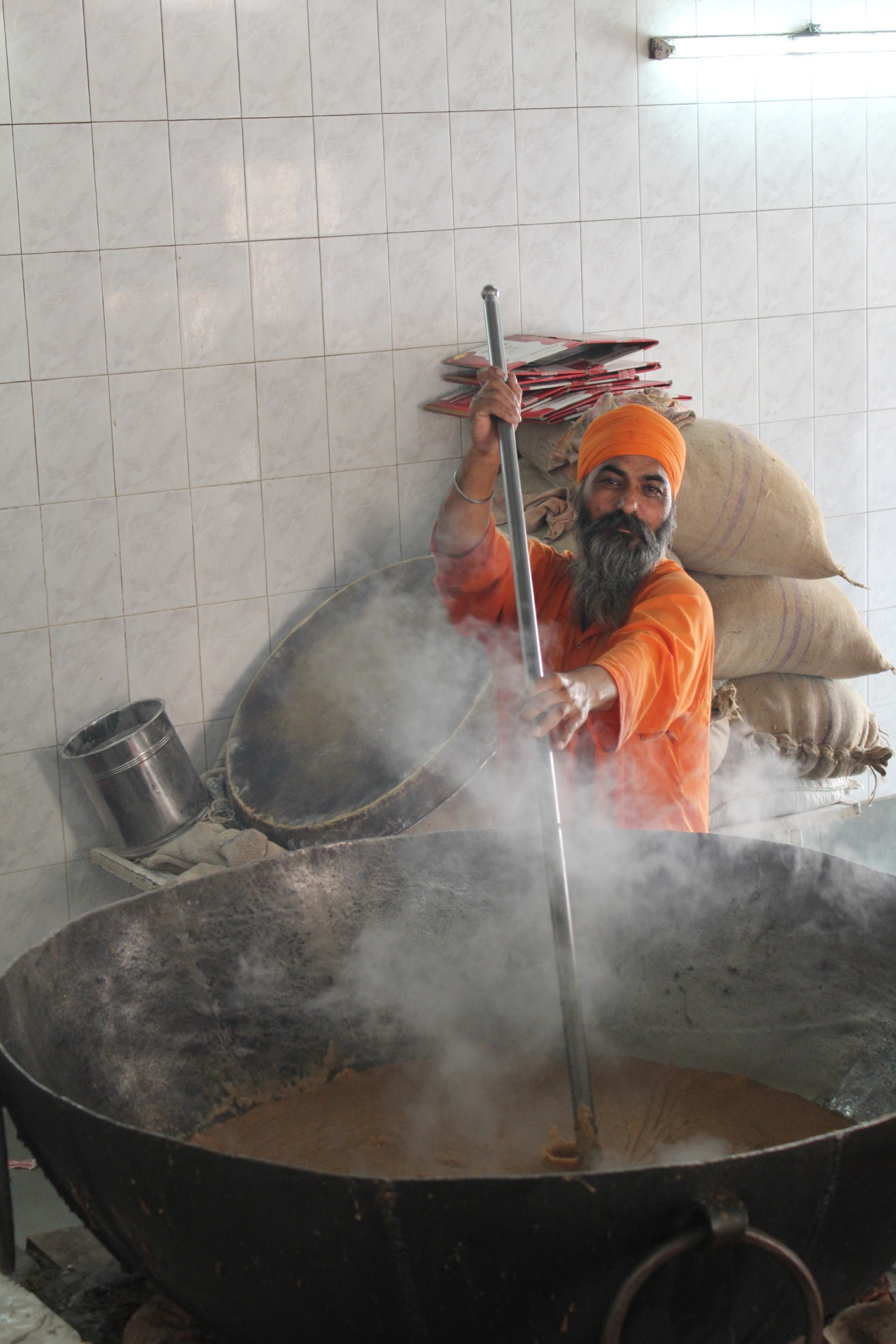 Dan was starting to get down with the spiritual side of India.  With all these beards and big feeds, Sikhism was looking pretty darn attractive.  Did we mention they get to carry big daggers? Woot!

Now having been in India for nearly a full 18 hours, it felt a bit slack that we hadn’t been on a rickshaw yet!  So when given the option to go and do some shopping in a different area of town, we leapt into a couple of rickshaws, H-J cutting her leg on a jagged, rusty chunk sticking out pretty much immediately and thanking her lucky stars for the tetanus booster she’d just had.  Nothing could dampen our spirits though!  And she still has a cool scar.

Dan followed along behind with our new friend Avi, eagerly anticipating…who knows?! 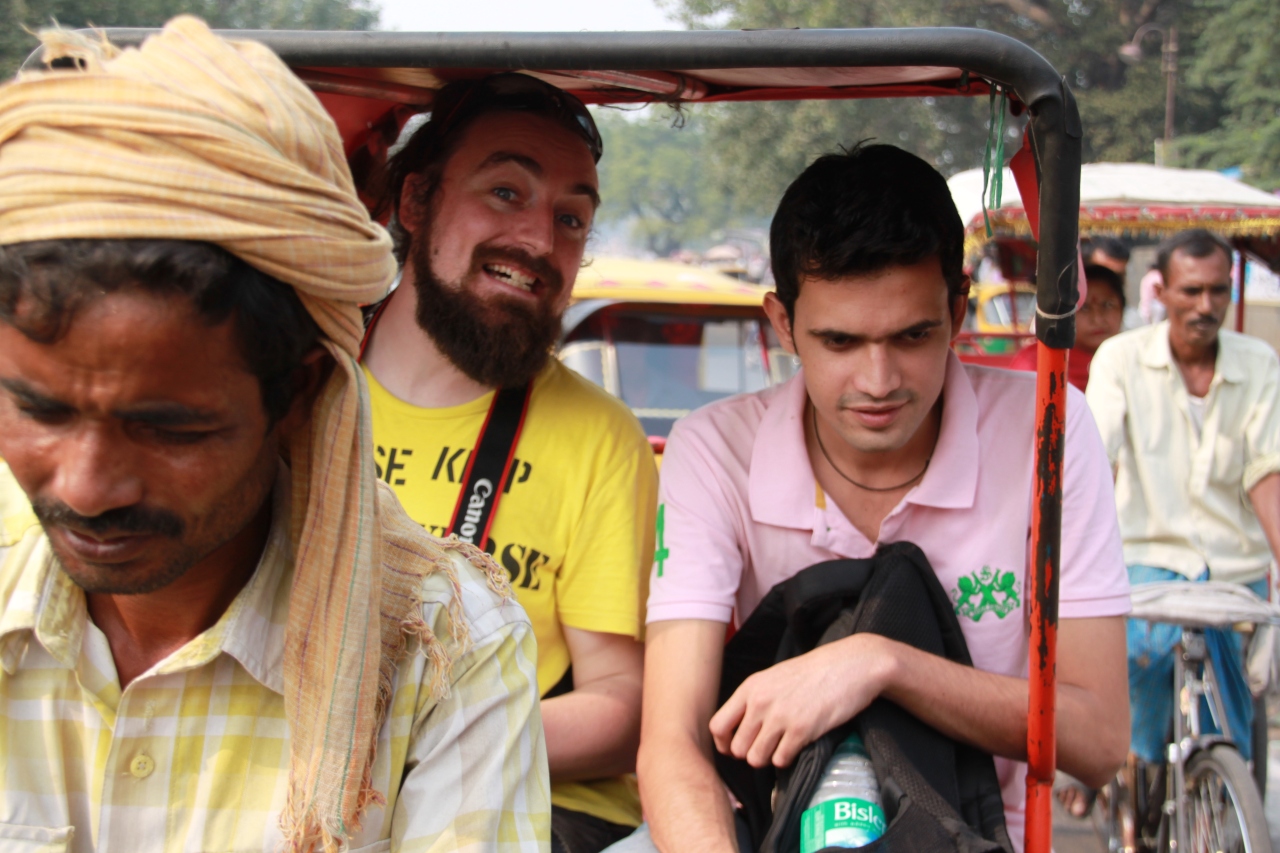 Arriving at our destination, a super friendly guy held the door open and ushered us down into the pit of glorious sari materials.  Now, isn’t that a face you want to buy from?! 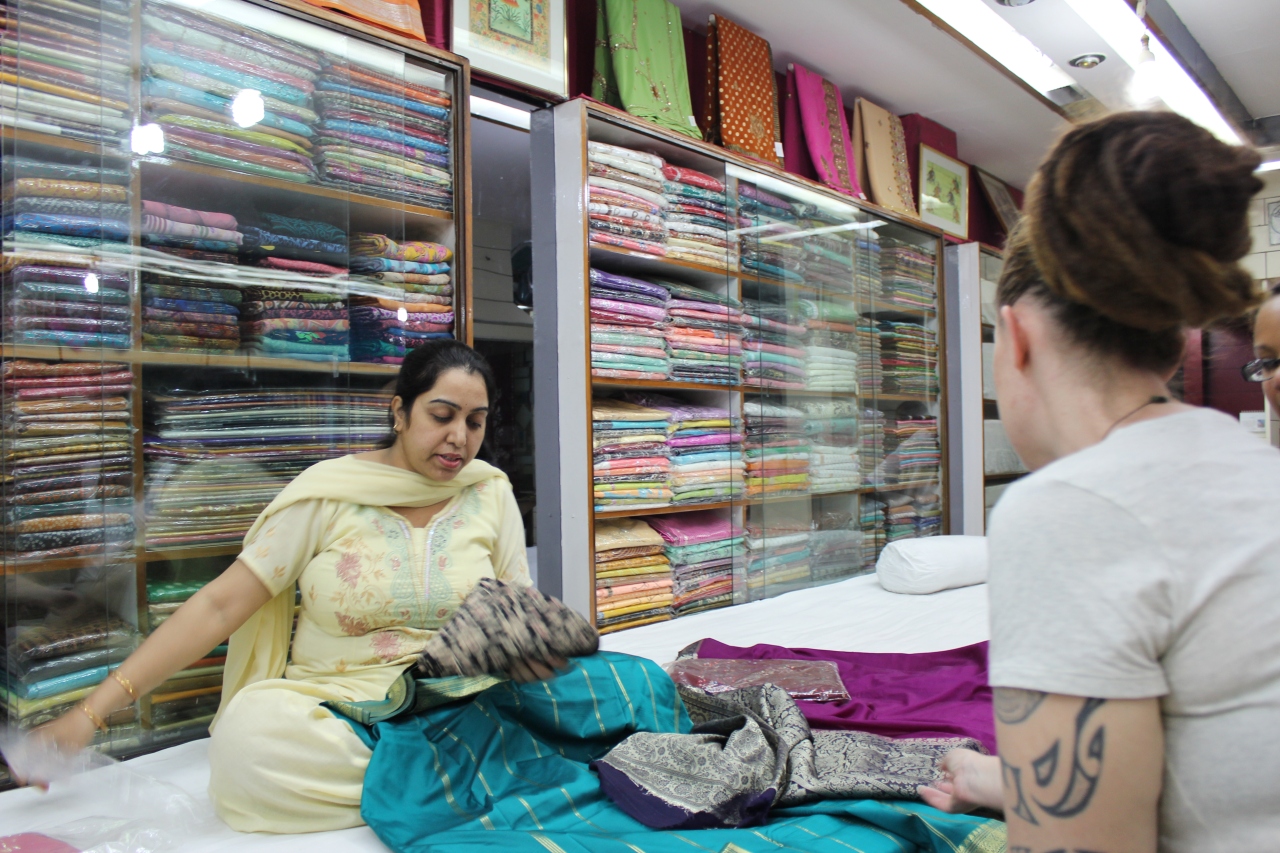 We bought a couple of small items but took the opportunity to do the totally cheesy thing and dress up in saris, just for the photo op.  We took off out of the shop fairly quickly afterwards in order not to incur their wrath for pissing around and not actually buying the saris.

By this stage, the night was closing in. All in all it was a pretty successful day – we sightsaw (sight see-d?! ugggh), we ate, we caught some religion in different forms, we drank chai, we rode rickshaws, we donned saris, we managed to navigate a dusty, crowded and overwhelming city – we awarded ourselves pretty much expert status by the time the sun started to fall on our first full day in India.  While feeling a lot more confident (read, we weren’t completely shitting ourselves anymore) we knew that India was going to encroach on us from all angles at every given opportunity.

And we couldn’t wait to see what each day was going to bring.

One last thing: it is utterly impossible to convey the sheer noise that Delhi produces.  Every minute between waking and crashing out into an exhausted coma is filled with relentless honking, the noise of cars, trucks and rickshaws jostling for space, cows mooing, people hawking their wares and the various temples making their various unique sounds.  Try and keep this in mind for an authentic experience while reading our blogs!

Incredible India – Bring it On!!!