The Hawaii of Korea – Part 1

Those of you to whom we had been excitedly garbling to before we left will have heard mention of Jeju Island, otherwise known as The Hawaii of Korea.

Well part 2 of our honeymoon saw us leaving fabulous Seoul to fly down to aforementioned “tropical paradise”.  We arrived on the island and following the directions of our oh-so-useful travel agent, hopped on another airport limosine bus to the stop as instructed.  We hauled our luggage off and realised there wasn’t much around and certainly no sign of a transfer to our hotel.  H-J went wandering off to the nearby convention centre to try and get some help and through miming (English is not widely spoken in the south of South Korea) got the information lady to contact the hotel who promptly came and picked us up.  We were then driven for around 10 minutes further, and further, and further away from the water (!!!) into the centre of the island and into the Middle of Nowhere…

First impressions of our hotel.

Number 1: it is near NOTHING, seriously, nothing within walking distance, nothing around, no ocean, just miles and miles of tangerine fields.

Oh well, there was a picture of an amazing looking pool on the website – we’ll just go swimming in the pool lots, right?!  We just hope that we don’t have to contend with loads of small children on the waterslide as its a Chinese public holiday and Jeju is a favourite holiday destination.

Number 2: there is NO water in the pool.  Gutted.  Apparently, its “off-season”.

Number 3: there are pretty much NO other people staying at this hotel in the Middle of Nowhere.

Number 4: its a crusty dive (thanks again to the travel agent) – water stained ceilings, doors that don’t close properly due to the fact that the floor was so uneven, decor that hadn’t been updated since maybe the 70s and a weird, funky smell throughout….

Number 5: the only internet access is from A particular seat in the hotel lobby.  Yes, one seat in the whole hotel from which we could access the internet.  (Now, for those of you wondering why on earth we would need the internet on our honeymoon, it was solely for the purpose of the increasingly frequent complaints to our travel agent.)

Number 6: arriving late in the day to the hotel, we were starving as, as mentioned, there is nothing around.  That’s okay, we thought, we will eat at the hotel restaurant.  Except it wasn’t really open (off-season) and the menu didn’t really inspire us with much confidence as it looked something like this:

Riiiiiight……
The simmered Jeju Hairtail fish and such dishes, as promised on the menu on the website, did not seem to feature on the actual menu.  Not that it really mattered as we didn’t see this restaurant or the bar open once in the three days we were there.

Oh well, at least we had the Honeymoon Suite.  Two bathrooms, a large lounge and a master bedroom with windows all around allowing us unfetered views of…well, nothing really.  If we craned our heads around the landing we could almost make out the empty pool! 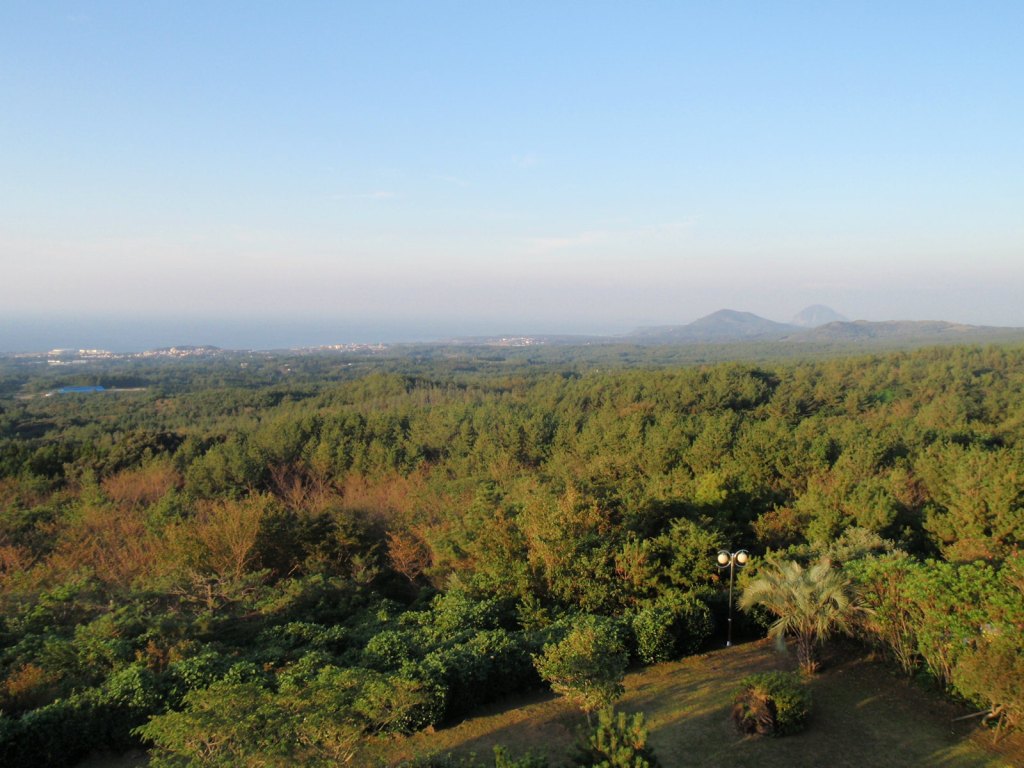 At the end of the day, a hotel is just somewhere to crash land at the end of the day so we weren’t really too worried as we had full days of stuff planned for our time in Jeju.  The hotel staff made things a bit easier by driving us in the hotel shuttle anytime we wanted to go to “town” (turns out we were on the side of the island that doesn’t really have a town, just a tourist strip with nothing but abalone restaurants – blech!) and that would pick us up at the end of our days.

The first night there we made use of this shuttle and managed to entertain ourselves by visiting the Ripley’s Believe It or Not Museum (limited options for entertainment, okay!) and managed to feed ourselves something other than abalone by eating at Kraze Burger.

The next day saw us up bright and early ready for a full day of touring with YeHa tours.  First stop was Sunset Peak – some of you may know that Jeju Island is in the running as one of the 28 finalists for the New 7 Wonders of the World.  Sunset Peak is the reason why.  Now to put in perspective some of the other contestants: Milford Sound in New Zealand (STUNNING), Mt Kilamanjaro, the Galapagos Islands, Igazu Falls, The Grand Canyon…all pretty epic and major stuff.  We do realise that coming from New Zealand we are utterly spoiled by what natural beauty is and admittedly this can lead to somewhat of a sense of cynicism when viewing other countries beauties.  However, we have spectacular photos from many awe inspiring places around the world so hardly feel jaded.

The view from the bottom: 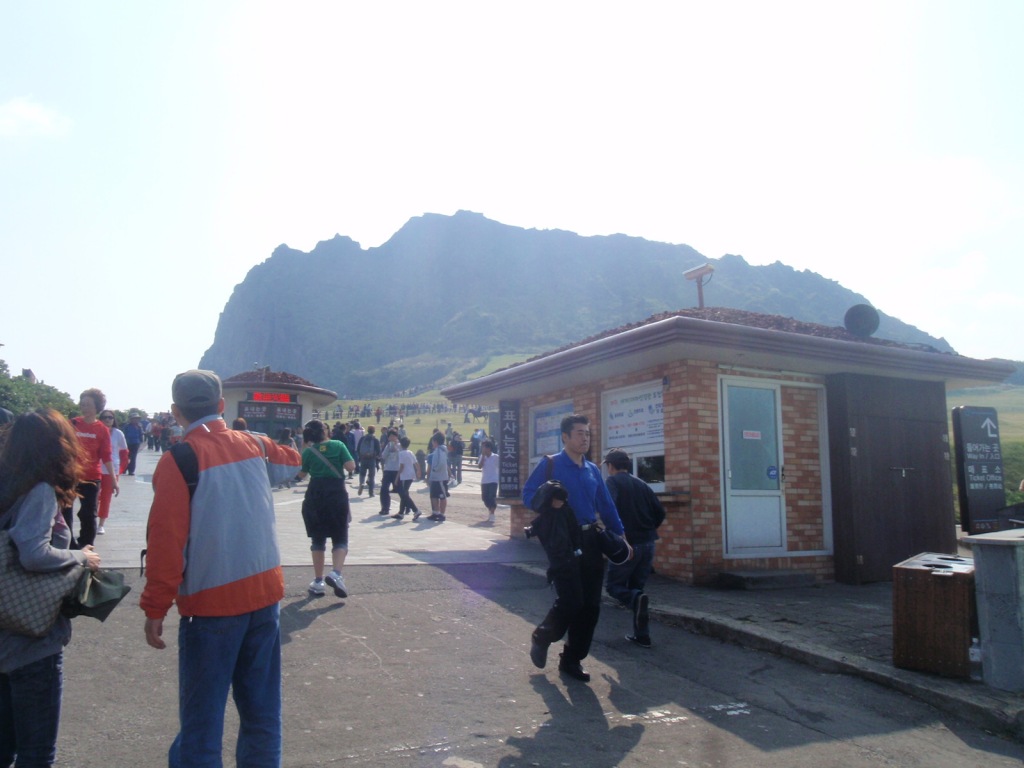 The views from the top:

It was incredibly difficult walking both up and down the peak simply due to the stupid amount of other people also doing the same thing.  The place was crazy busy.

We can say we’ve done it as anyone that knows you’ve been to Jeju Island will inevitably ask.  If you’re keen to see what it looks like from the sky (far more impressive) check out the photo on http://www.new7wonders.com and you’ll see the view that I’m sure its more famous for.  And maybe make some comparisons while you’re there and see what you think…

A really cool feature of Jeju Island are large sculptures carved out of volcanic rock, called Dolharubang, which if we remember rightly from the tour guide means “stone grandfather”.  They are considered to be gods offering both protection and fertility and were placed outside of gates for protection against demons travelling between realities (thanks Wiki!).  Apparently, if you rub the ear of a dolharubang you will be blessed with a baby girl and if you rub the nose, a baby boy.  You can no doubt guess which appendage most Koreans were touching… 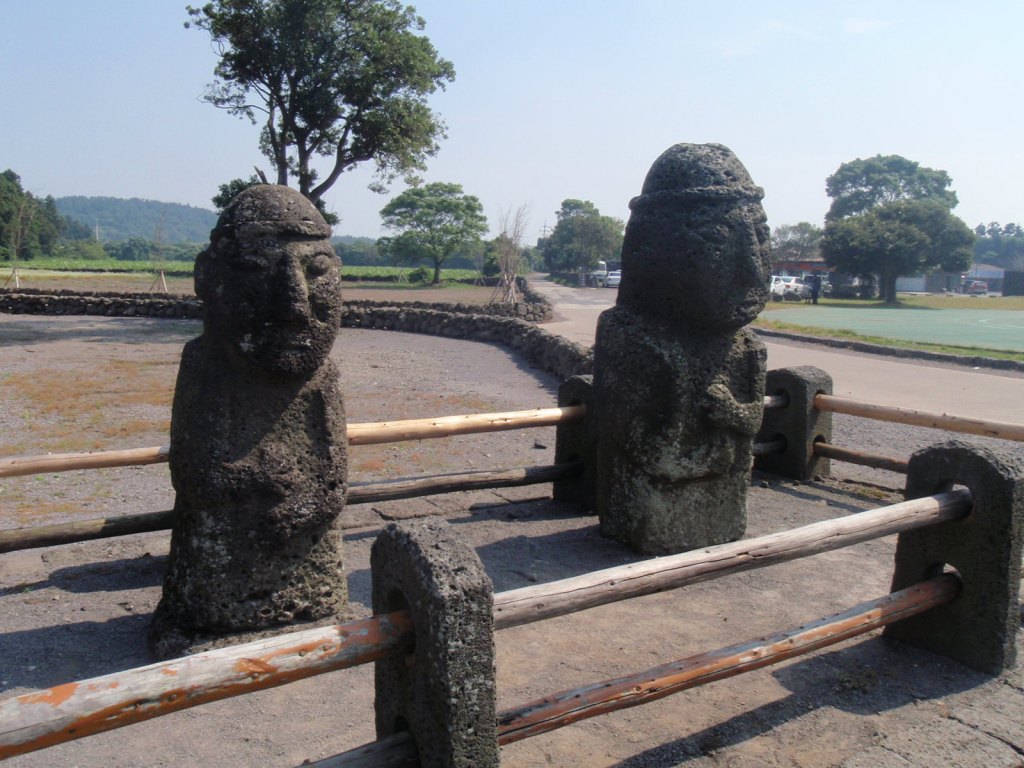 A really, really big one! 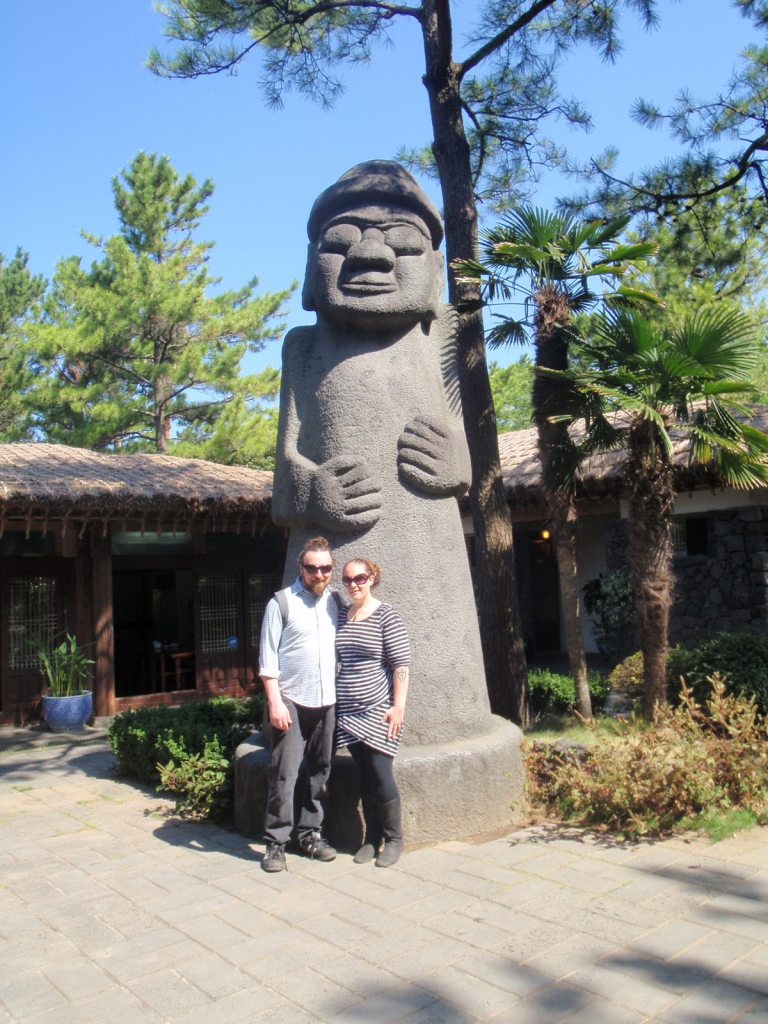 Anyhoo, they’re really cool and all over the island.

Continuing on the tour we were dropped off at a “traditional village” to have a look around.  The idea of these villages is that in order to preserve the culture of the island, some people have chosen to live in the traditional style housing and community set up.  Obviously its also a tourist attraction but the money from tourism goes someway towards preserving some cultural heritage (we think!).  Modernisation has not been kept completely out of it as there were a lot of cable tv dishes and very nice cars around the place. 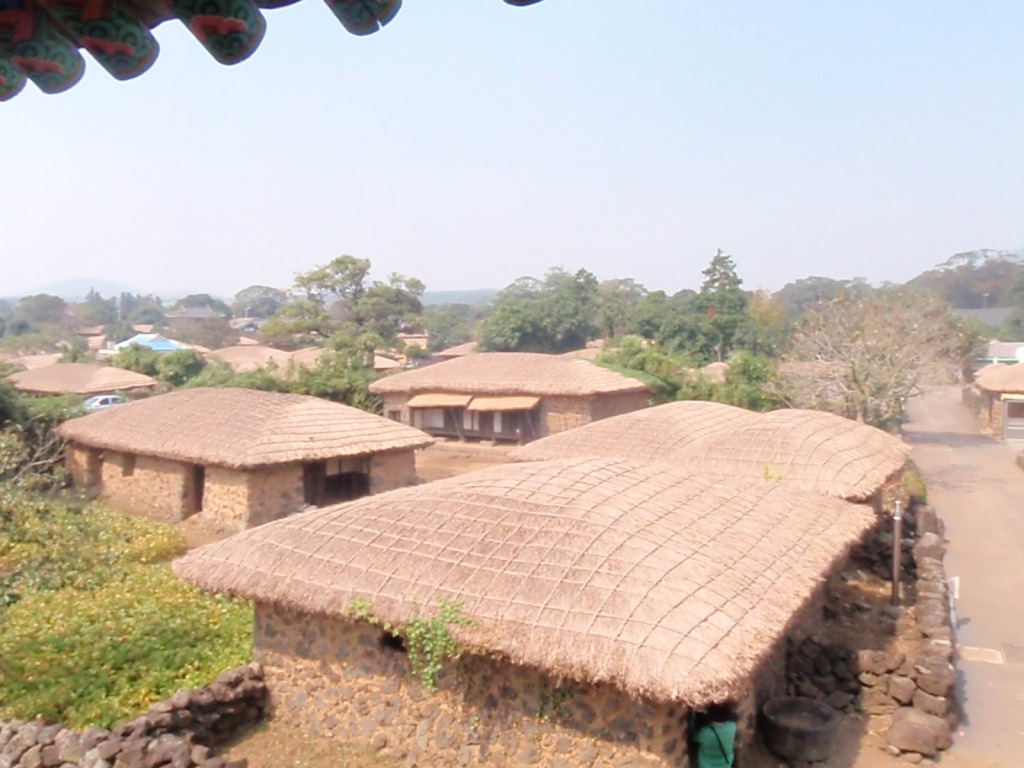 After having a cursory nosey around the place, we stumbled across something that made us giddy with excitement…a sign for coffee!!!

We tentatively entered a tiny shop to discover not only had we found coffee – and proper coffee at that – but also a Master Roaster.  Though he spoke very little English, we spent an amazing half hour with this man and his wife as they poured us coffees and we drew pictures back and forth to “discuss” coffee and beans from different places around the world.  We have his business card so are hoping we can get him to send us some of his roast.  It was such a random find in such a random place but totally the coolest experience.

If you get the chance, do visit this cafe! 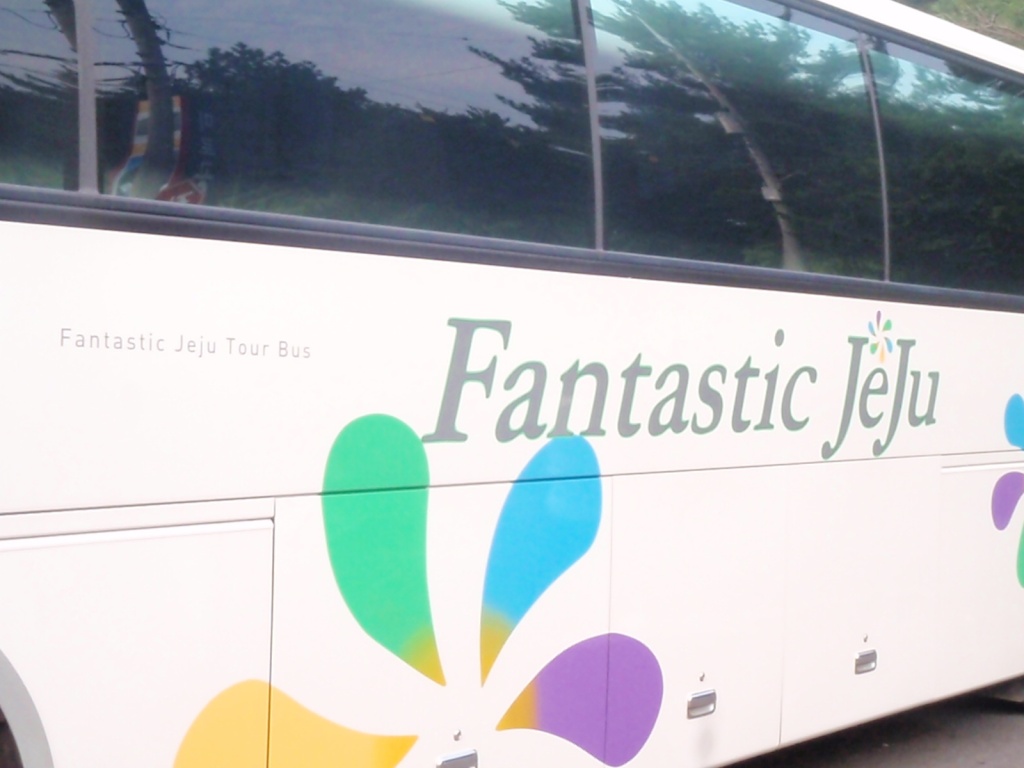