The Good Bits of Xi’an

Which is not to say that there are bad bits of Xi’an, merely that the previous post about the trip wasn’t exactly the highlight reel.  It has, however, been pointed out to us that people are actually looking forward to hearing about the other stuff – not just the aviation radish and endless tarmac jaunts. What is it we do better than most?  Eat. So it only seems fitting that our Good Bits begin with the most delicious street of food we’ve had the pleasure of eating in a while.  Busy, yes.  Touristy, yes.  Meat-filled, yes – no pork, no seafood, lots of beef. A highly recommended part of any itinerary for Xi’an, HELLS yes. Welcome to the Muslim Quarter AKA Beiyuanmen Muslim Street..

First up, the affectionately dubbed ‘Chinese Pizza’.  Note, it wasn’t us who dubbed it thus but the first (of a few) vendors who was lucky enough to sell us this treat.  Meat and/or veg smeared inside thin pastry, fried into a greasy, delightful round. 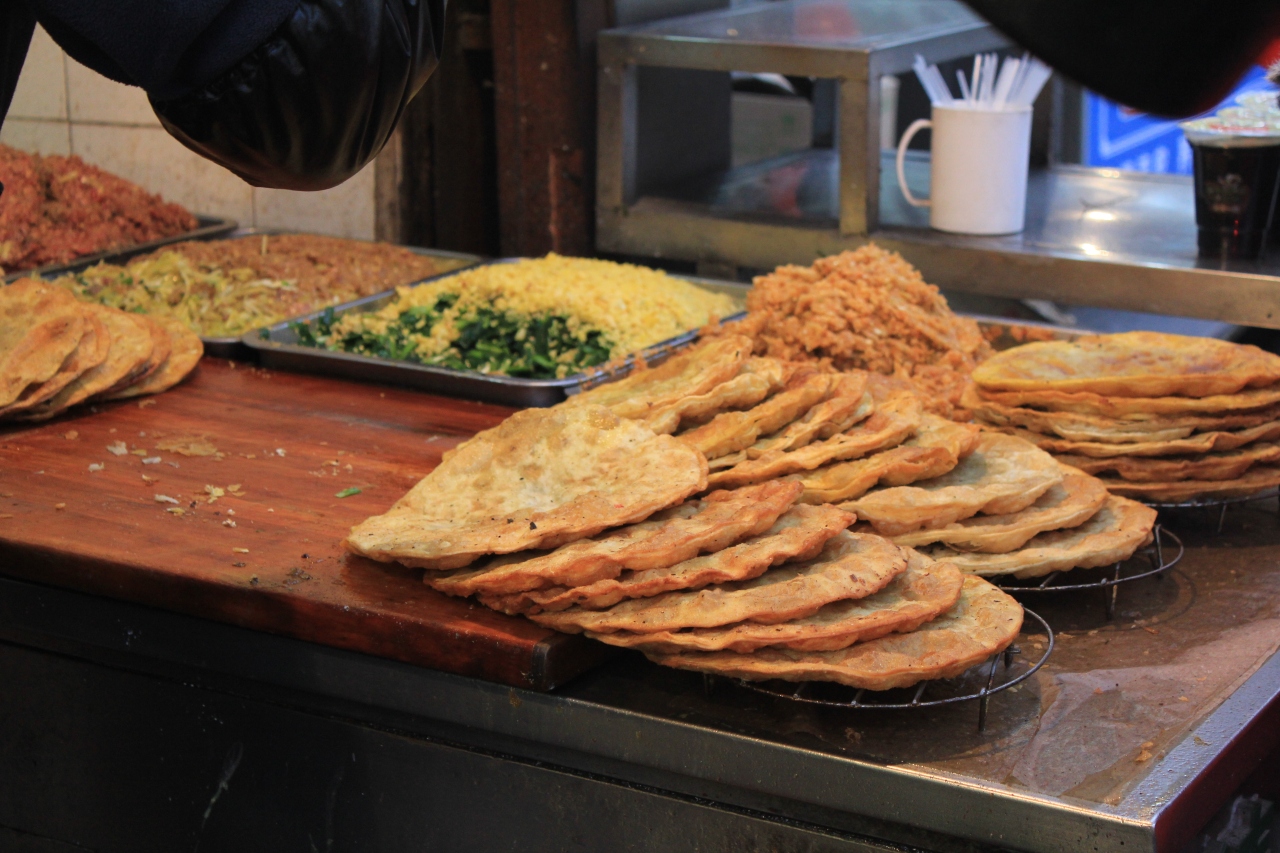 Large pots of food always take our fancy.  This street provided no shortage of army sized tureens with various concoctions residing happily inside, before being transported, just as happily, into the bellies of the many filling this street.

Like many a part of China and surrounding areas, meat on sticks was bountiful and cooked to order. 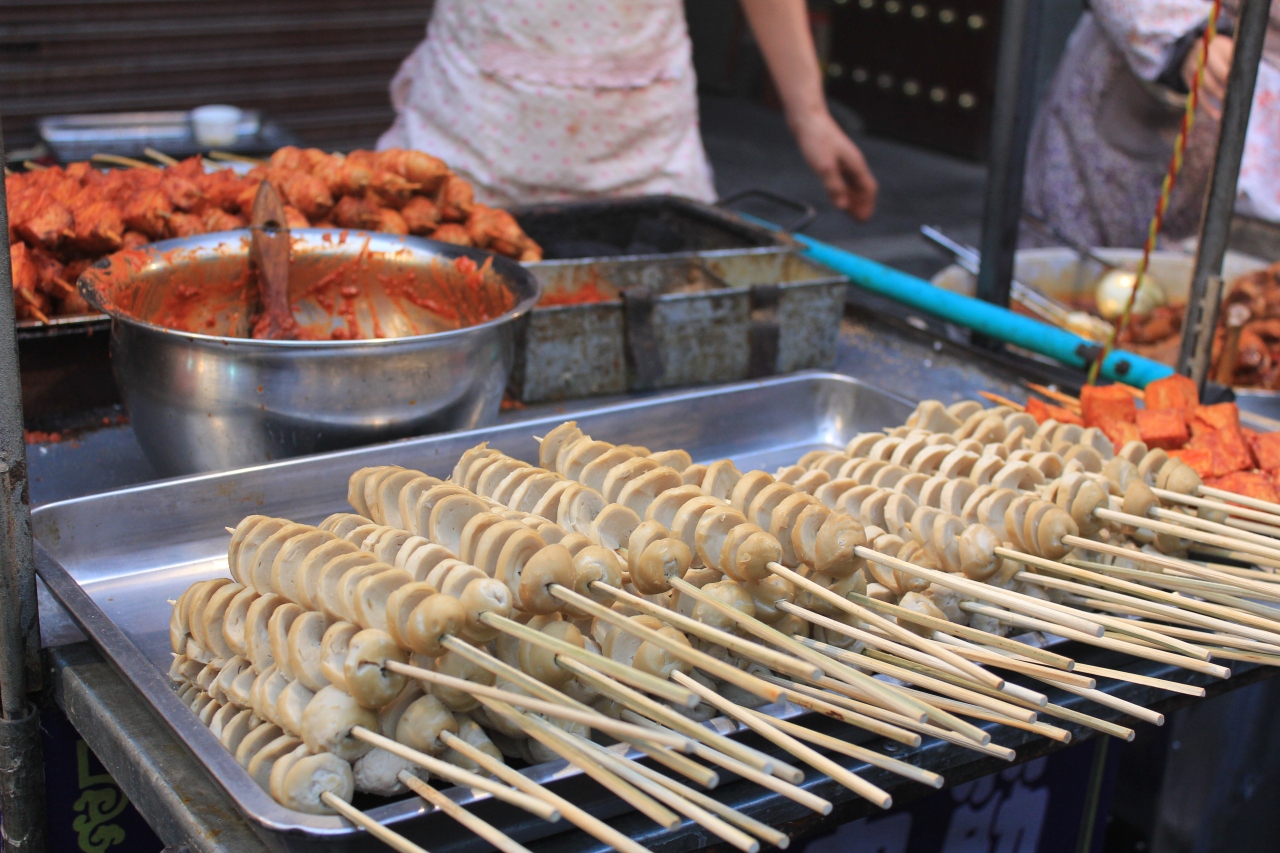 An under-rated highlight for us was these supremely tasty teeny-tiny new potatoes, cooked to moist perfection and smothered in a salty, spicy mix redolent with flavours much closer to the middle east. 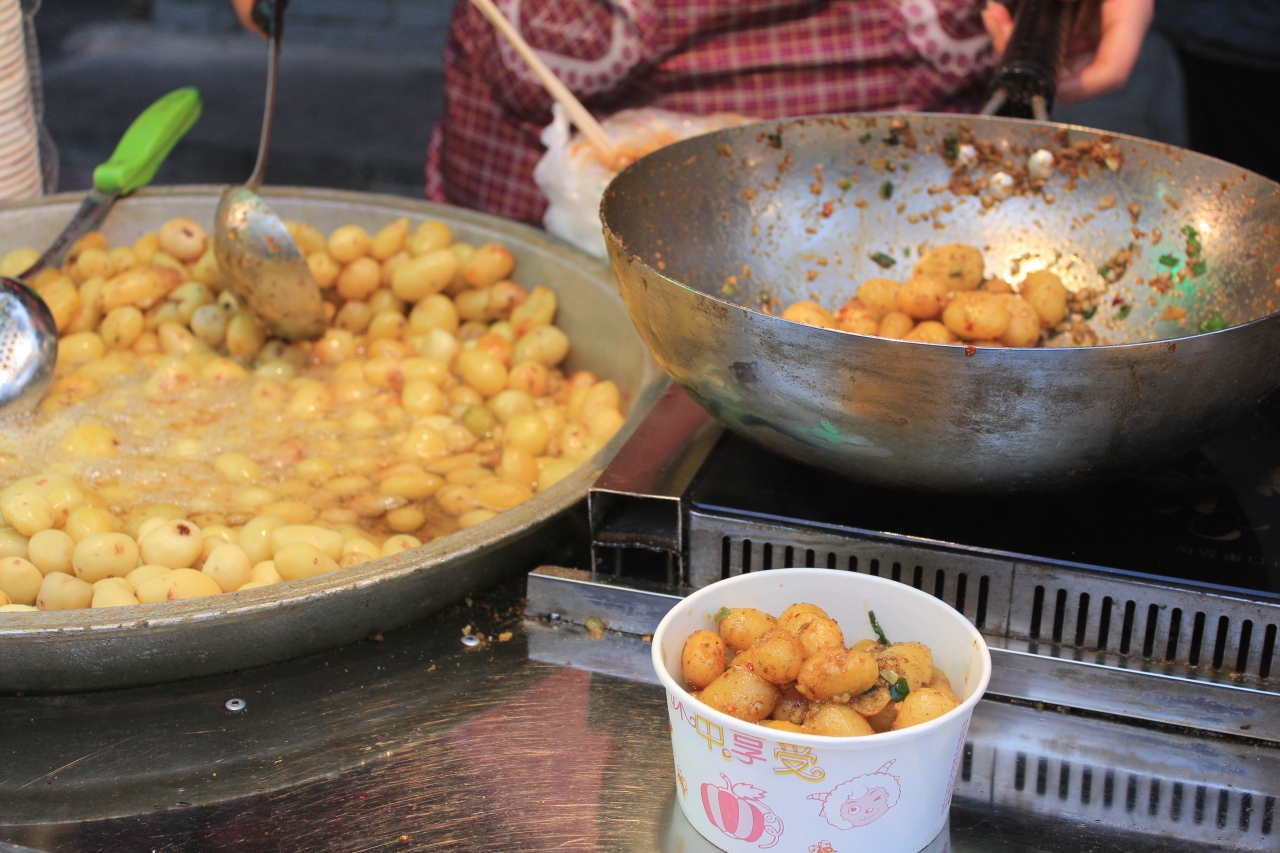 Being in the more northerly reaches of China, there is far less (boring) white rice up these ways, and a noticeable increase of both noodles and bread.  Xi’an has myriad famous noodles dishes and the streets are lined with establishments displaying not only their wares but also the crew putting in the hard work to make them. 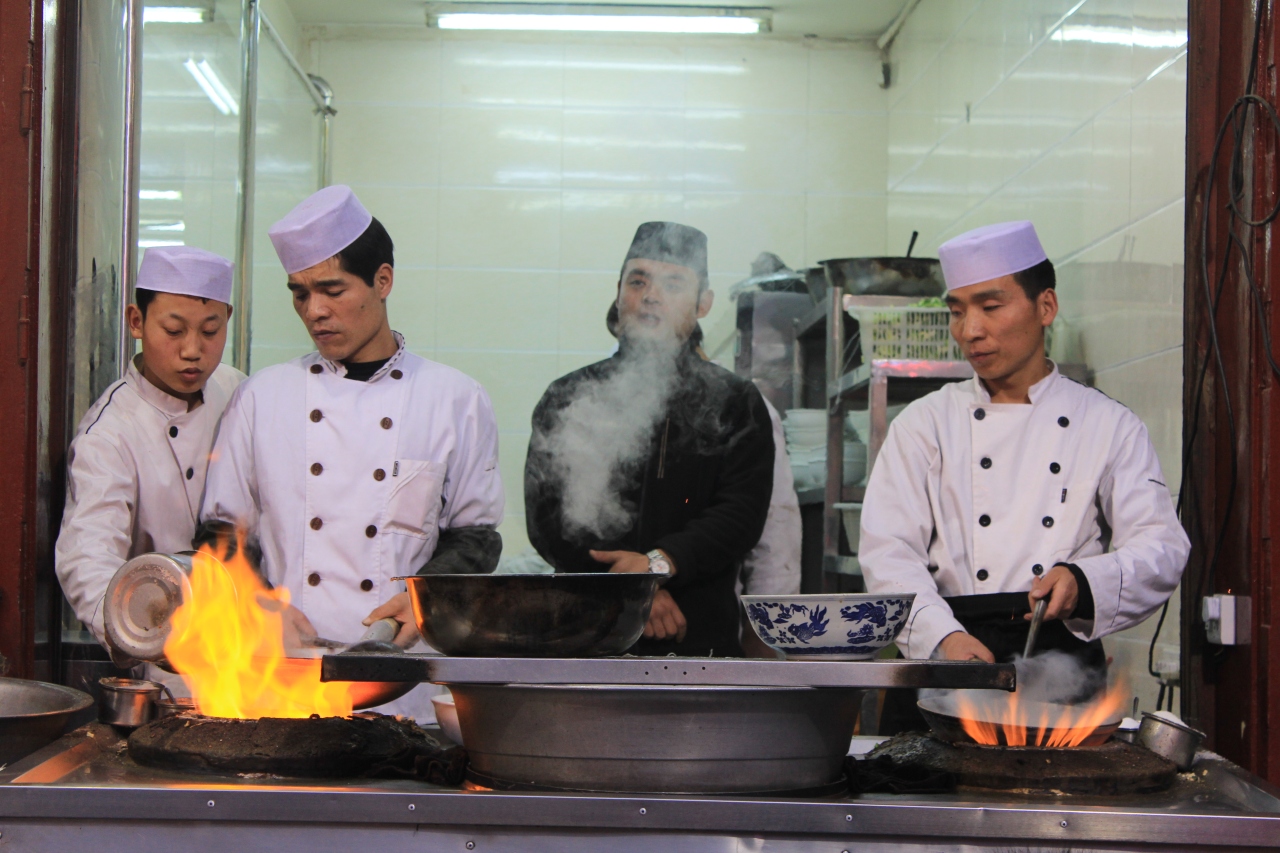 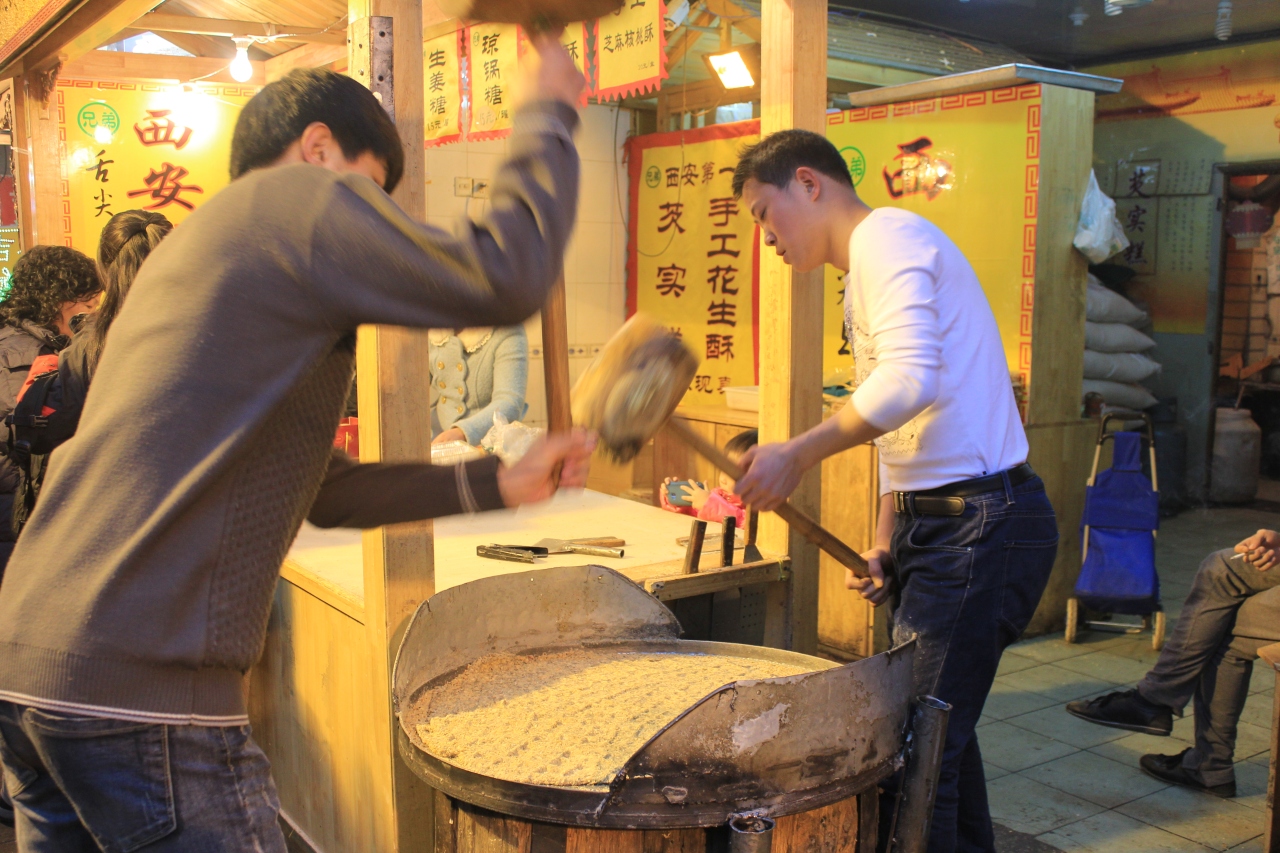 A favourite of H-J’s all the way back in Korea was maechurial, or quail’s eggs.  A touch of Korea was present int he form of the little guys being smothered in a kind of batter, cooked on a cool egg-shaped grill thing and then sloshed with gojuchang.  Sweet!  It was an unexpected and well tasty trip down memory lane. 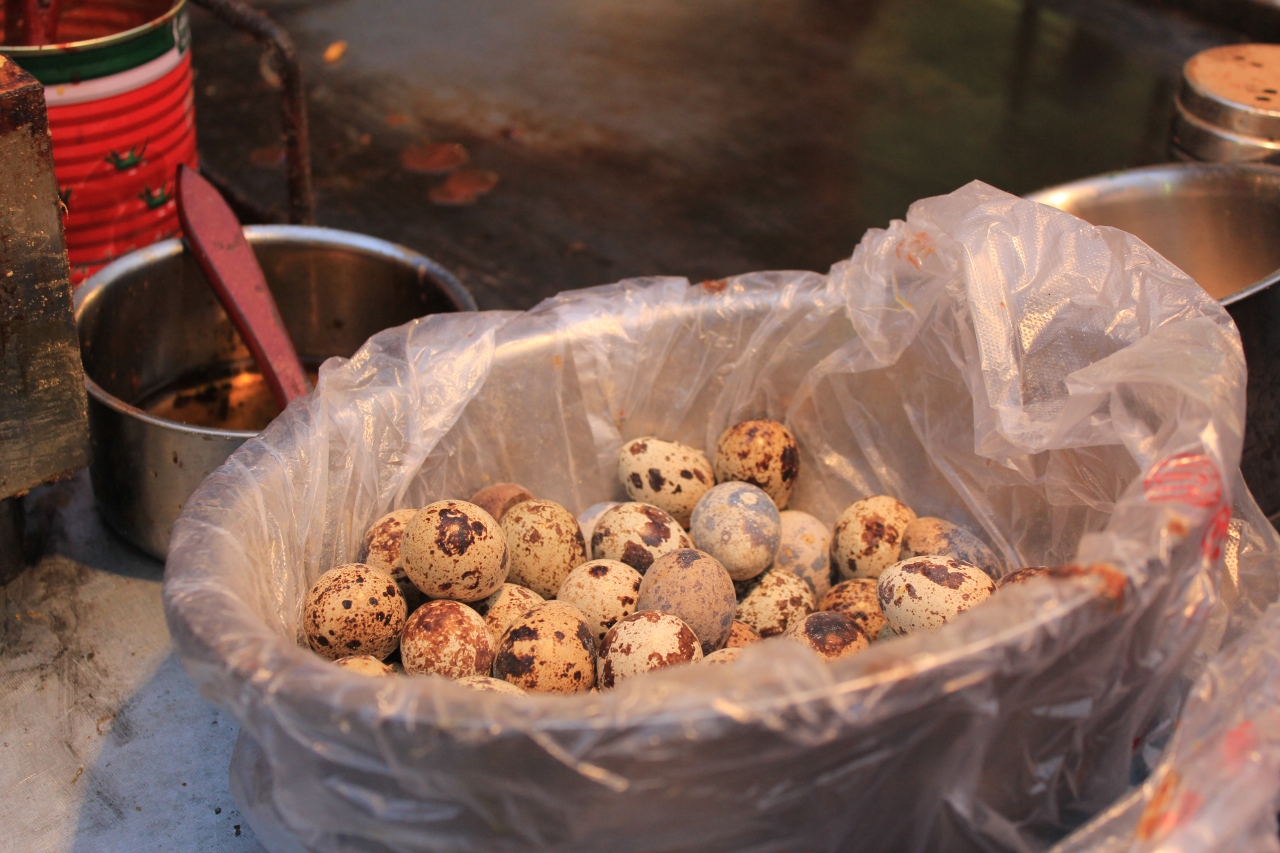 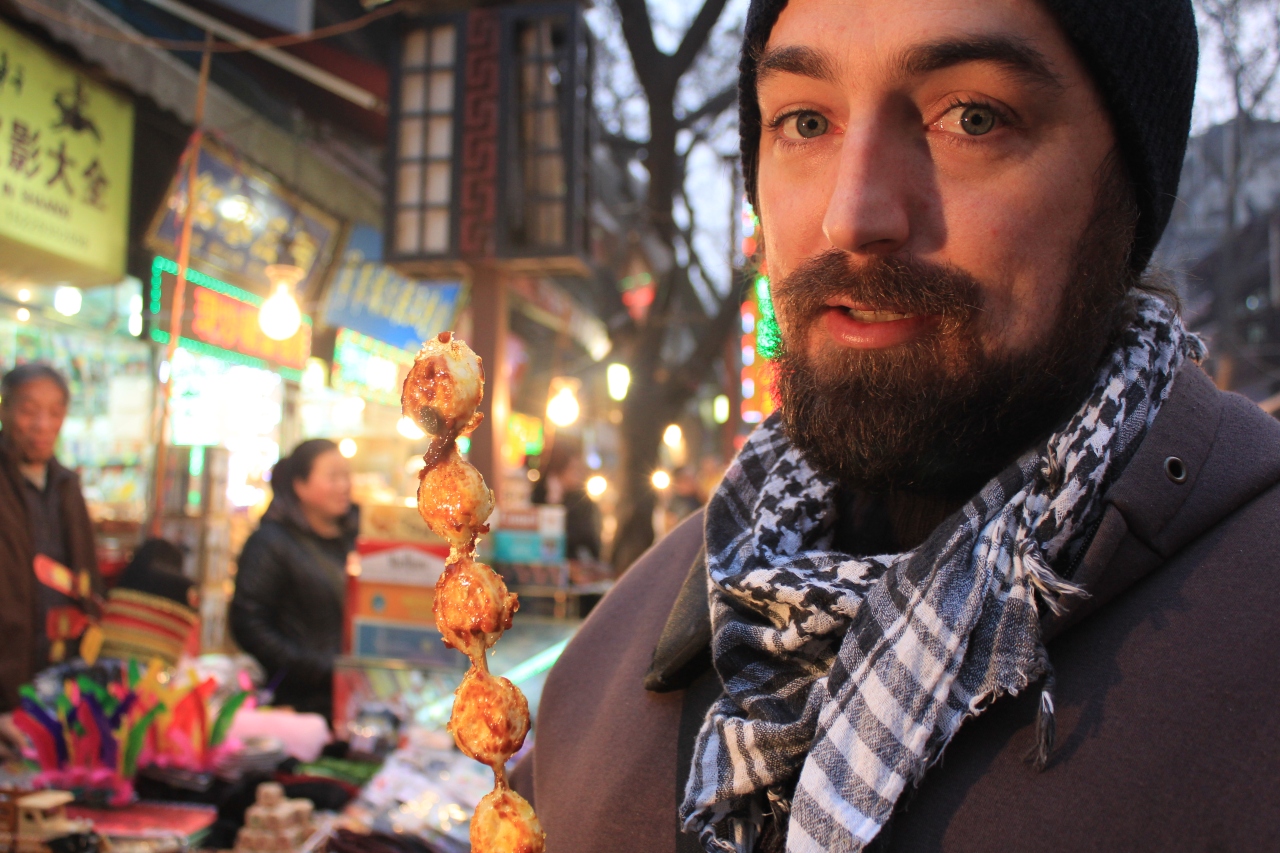 But back to the wheat based goodies – bread!  Humungous circles of the stuff could be seen in various different shapes.  This guy was cutting off chunks to order, weighing them in an old fashioned set of scales and charging customers accordingly.  He was doing a roaring trade and was grumpy/efficient in that way that only the best market traders can be. 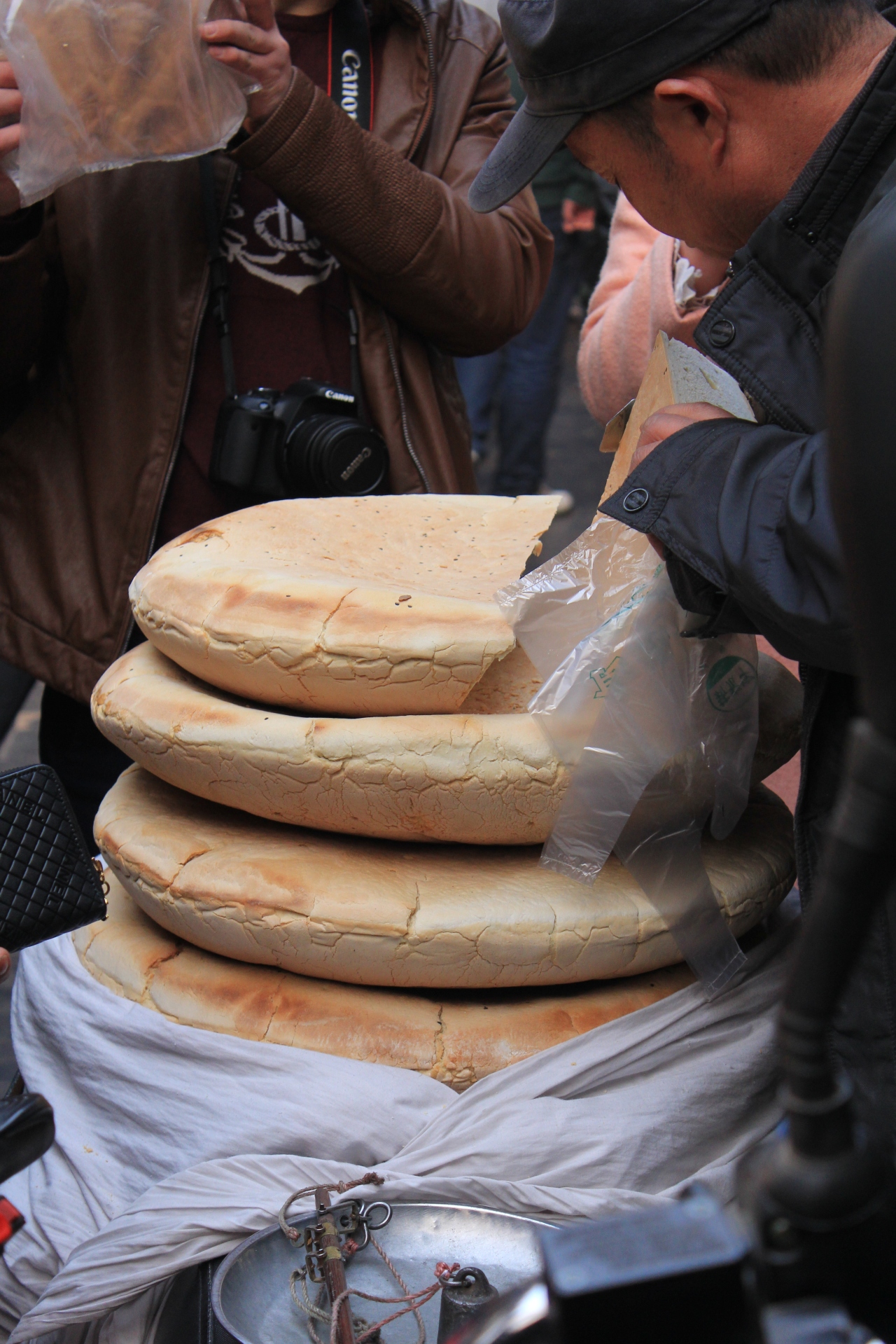 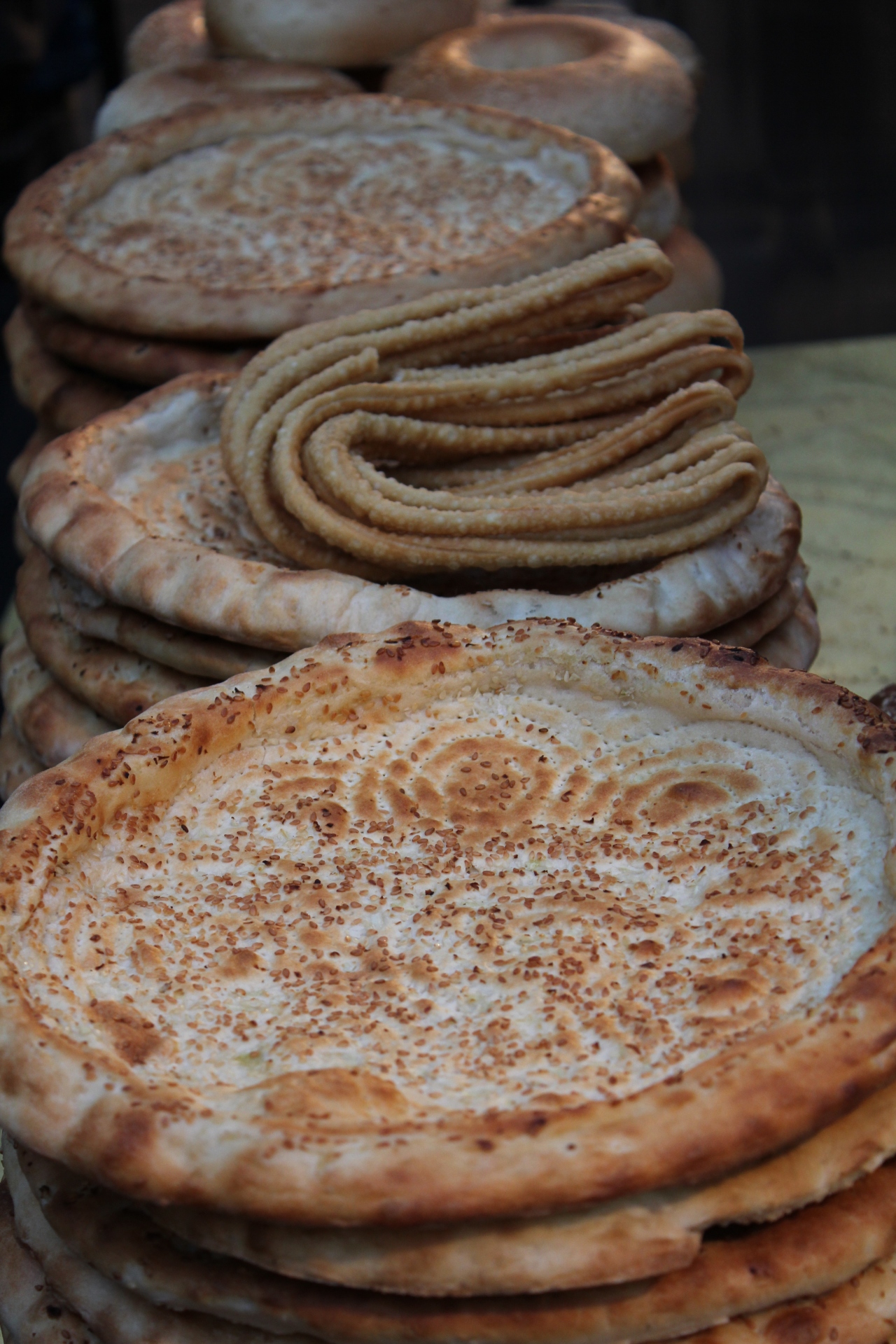 Always suckers for a queue to food, we spotted this doozy which dangerously intercepted the flow of hungry pedestrians.  Of course, we joined right in and waited…

The end result being a small, round pocket of hot bread stuffed with freshly carved slow-braised beef, then spread with a layer of mouth-numbing, Sichuan peppercorn-laced sauce.  The.  Bomb. 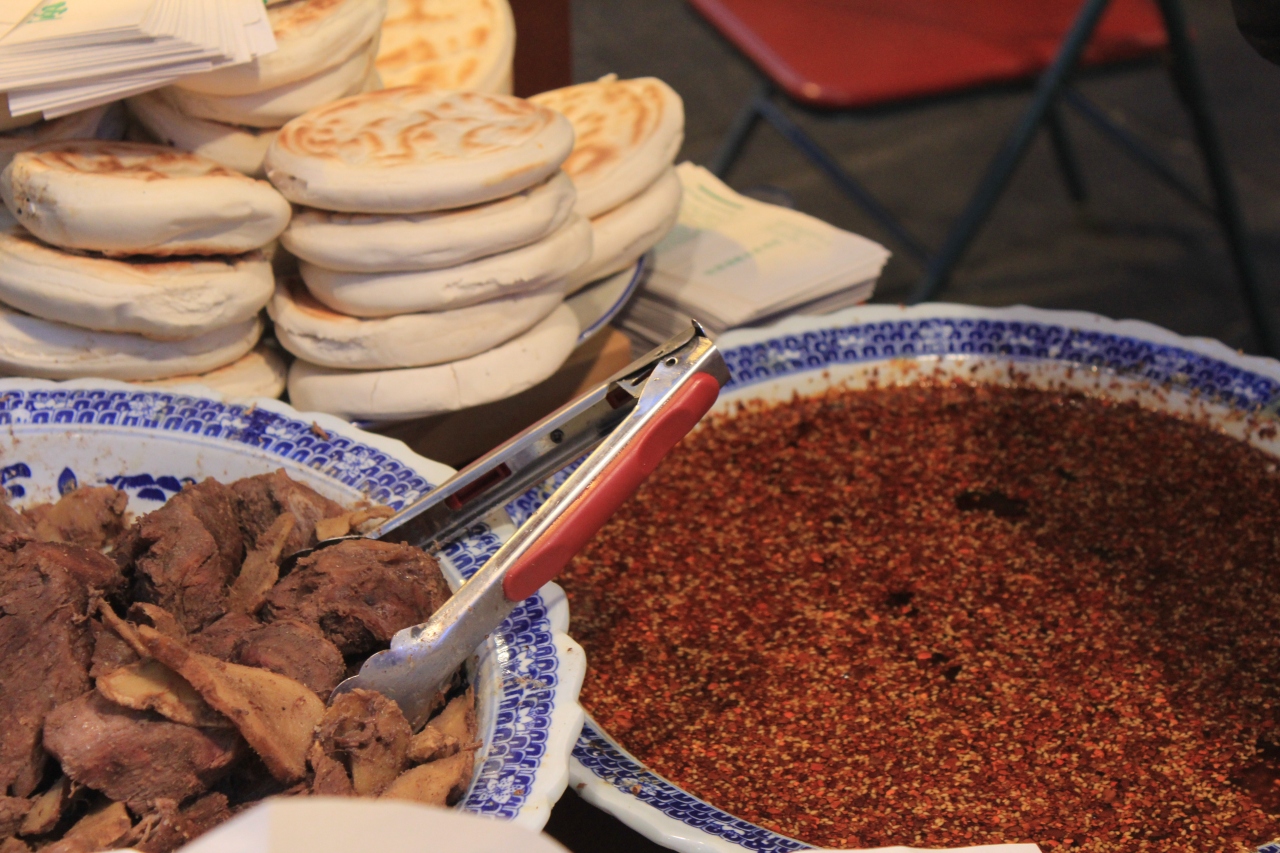 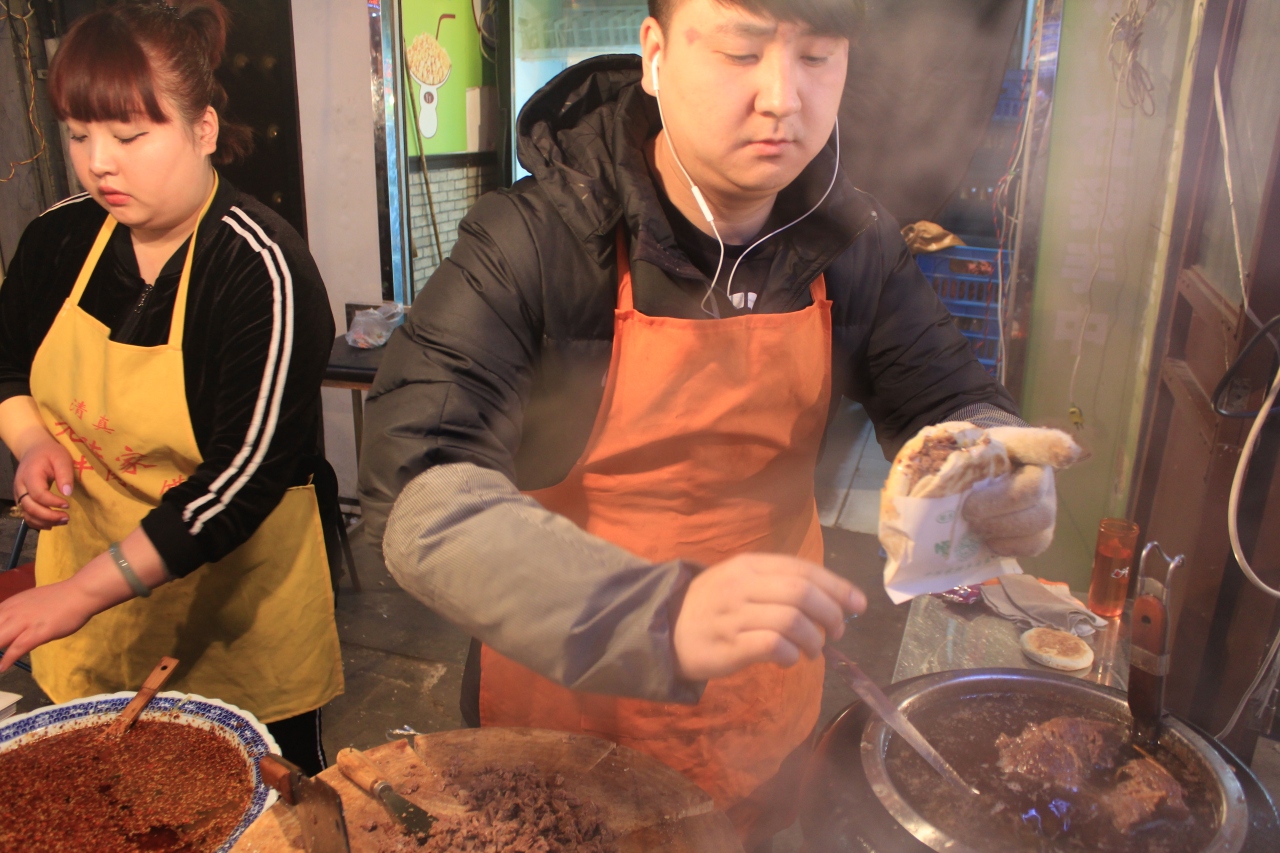 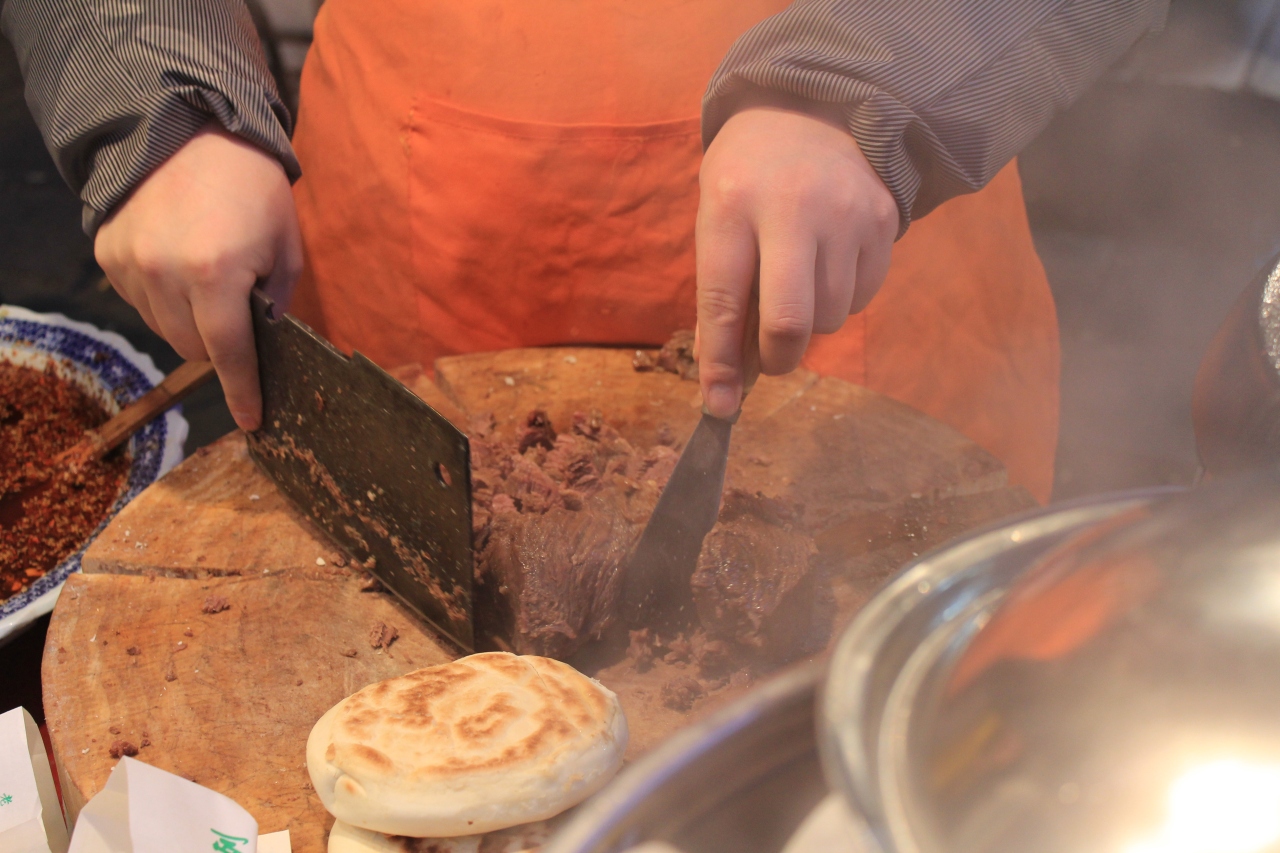 We’d just been snacking up until this point – over the course of a couple of days of course, as we just couldn’t resist the pull to come to this street each day we were in Xi’an.  The time had come, however, to try a couple of Xi’an most famous (and substantial) noodle dishes.  First up was the well named ‘belt noodles’ (biangbiang), named such for the thickness and length of the noodles – you could totally loop ’em through your trouser loops, if you could resist eating them.

They came laced with more chunks of beef, fresh vegies and herbs and a shock of perfectly spiced sauce.  Gooood.

Next on the to-eat list was what is considered by many to be The Most Famous Dish of the region – yangrou paomo.  It’s basically a steaming bowl of tiny pieces of crumbled, unleavened bread dropped into a rich mutton stew.  It’s not the faint hearted or the slightly peckish.  Even between us, we struggled to eat a whole bowl.  Which of course had NOTHING to do with the breakfast buffets at the hotel, or the snacks previously disclosed or the previous bowl of noodles.  Nope, nope, nope!

More meat still beckoned.  Dan was tempted by walking past stall after stall of some kind of trotter.  While normally we would assume that it would be pig, in this particular area that was not going to be the case.  Sheep?  Goat?  Who knows…

With night approaching the place still doesn’t let up but the light takes on a really cool quality.  Colours of both people and food stood out brightly. 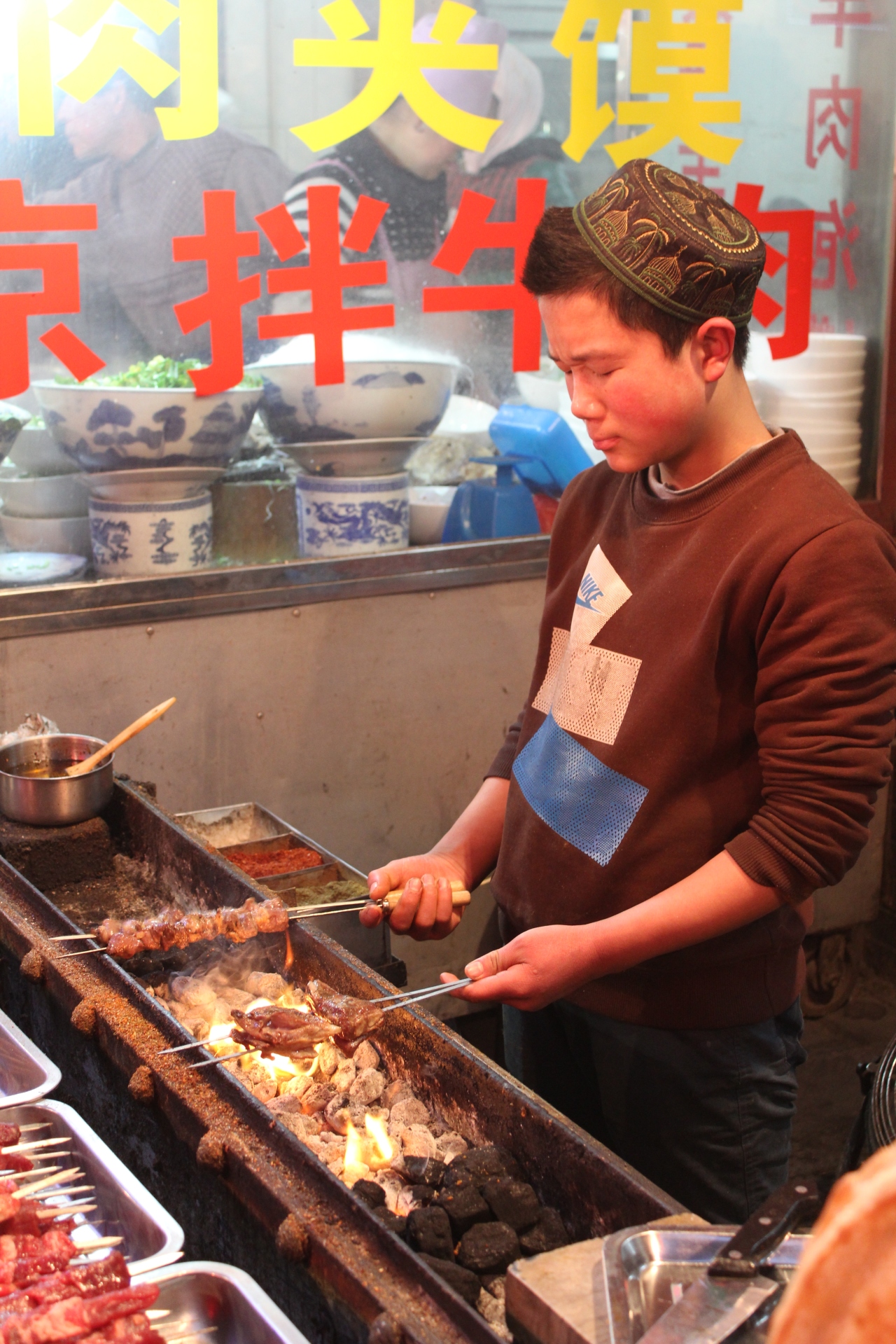 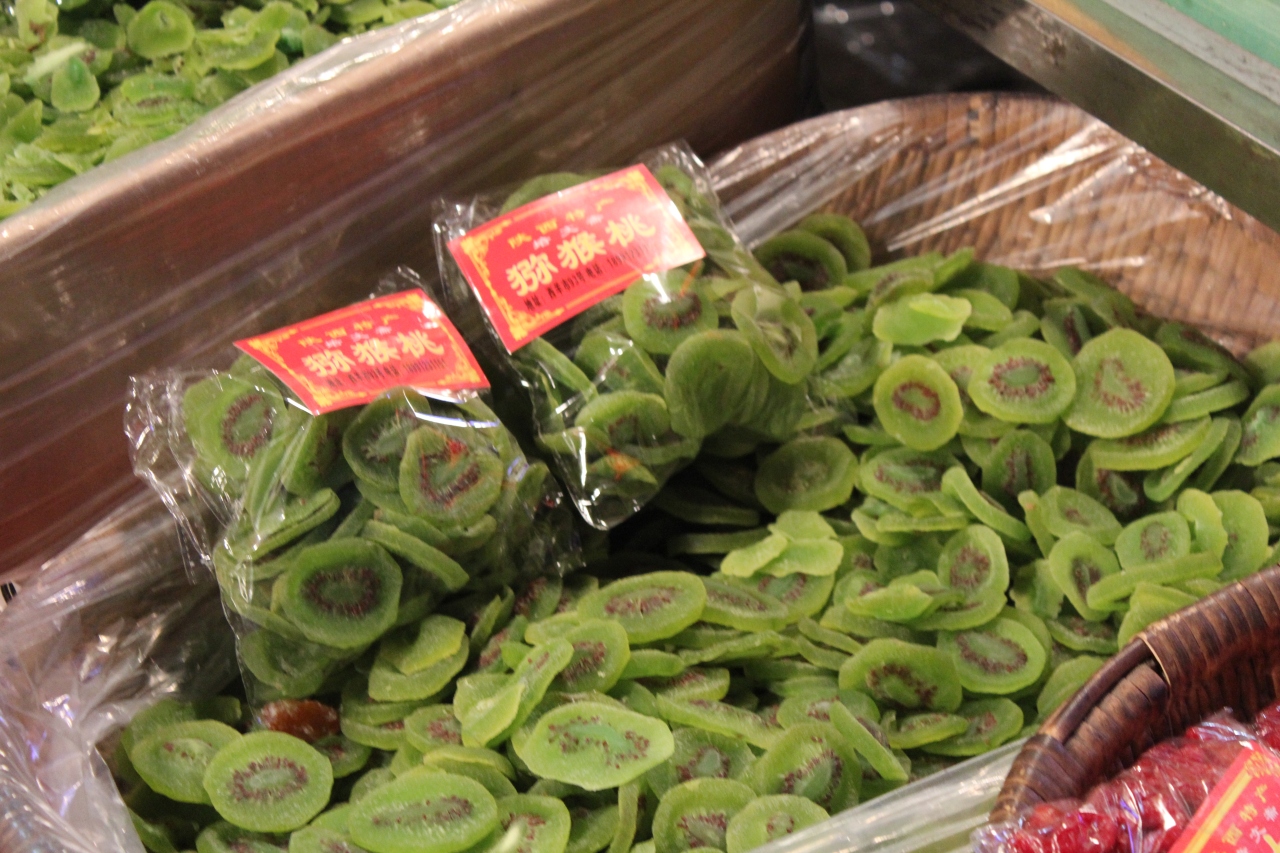 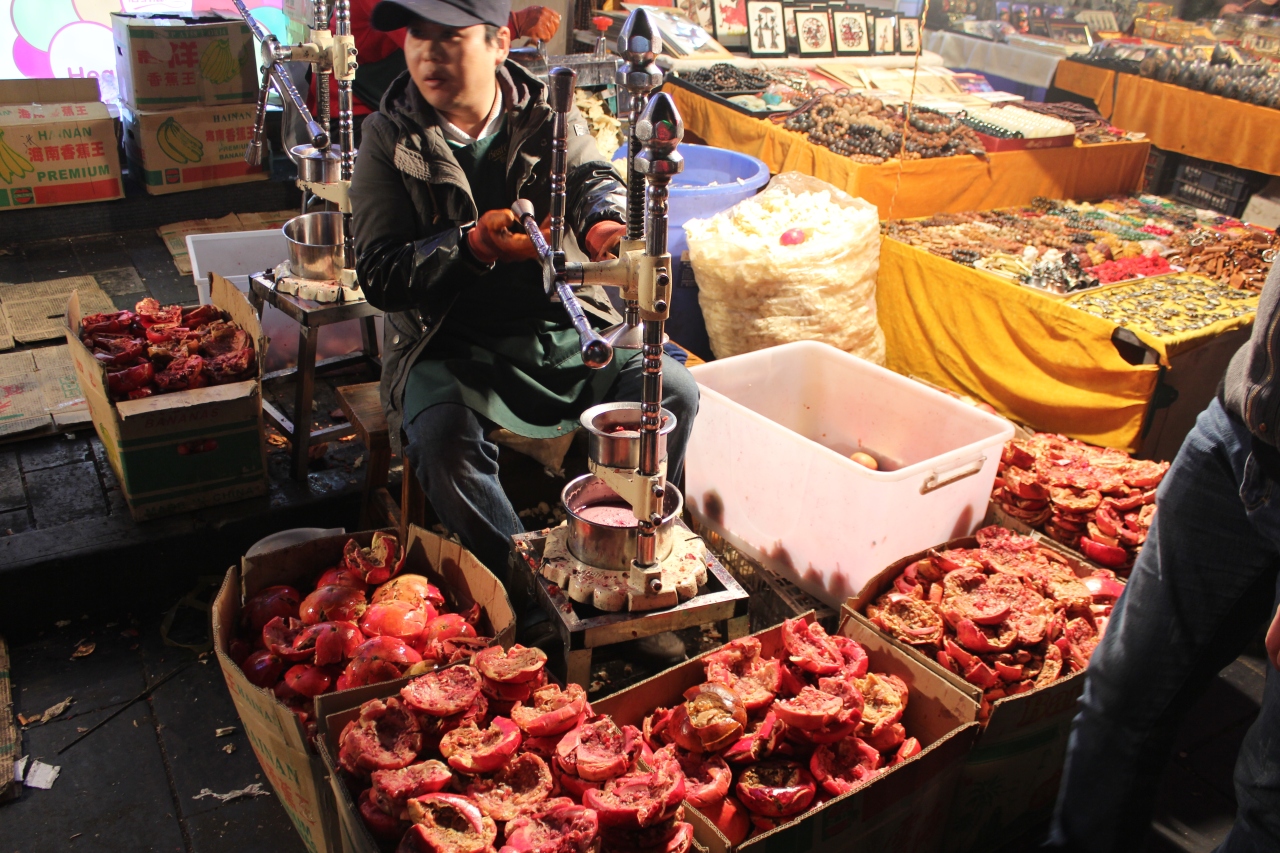 With night setting in, it was time for one last round of Chinese pizza, from a different establishment this time.  These guys ran a tight production line of smear, crimp, fry and chop and the end result was a more robust, but still delightfully sinful, product.

All bagged up and ready to go back to the hotel with us for a late night snack.  Sweet!

Ps. You may notice (unless you’re reading this via Braille) that we’ve changed our blog theme.  If you love it/hate it/think it needs a tweak toward perfection, please let us know!