Inflatable Poo and a Pie or Two…

Perfect days occur most often in unexpected and unplanned ways.  Making the most of a day off work mid-week and the unusually sunny, clear day, we decided to hit Hong Kong’s Western Promenade area to check out an exhibition that has been the talk of the town.  So forgive us the short segue from our India travels – but it was the kind of random day that would be rude not to share.

As mentioned, the weather was utterly stunning; it was one of those rare days when the hot sun is shining, the clouds are puffy and white, the sky radiates a delicate but wonderful shade of eggshell blue and the pollution has cleared off allowing the buildings that line the ever impressive HK harbour to be seen in high definition.

The International Commerce Centre (ICC) is a particularly impressive feature of the Kowloon side of the skyline.  Reaching 118 stories into the heavens, it houses, among other more boring and commerce-y stuff, the Ritz-Carlton, which lays claim to not being only the world’s highest hotel but also to having the world’s highest swimming pool and bar.

Until June a rather random blot on the ICC’s otherwise glamorous foreground can be seen, much to the amusement of, well, everybody with half a soul. 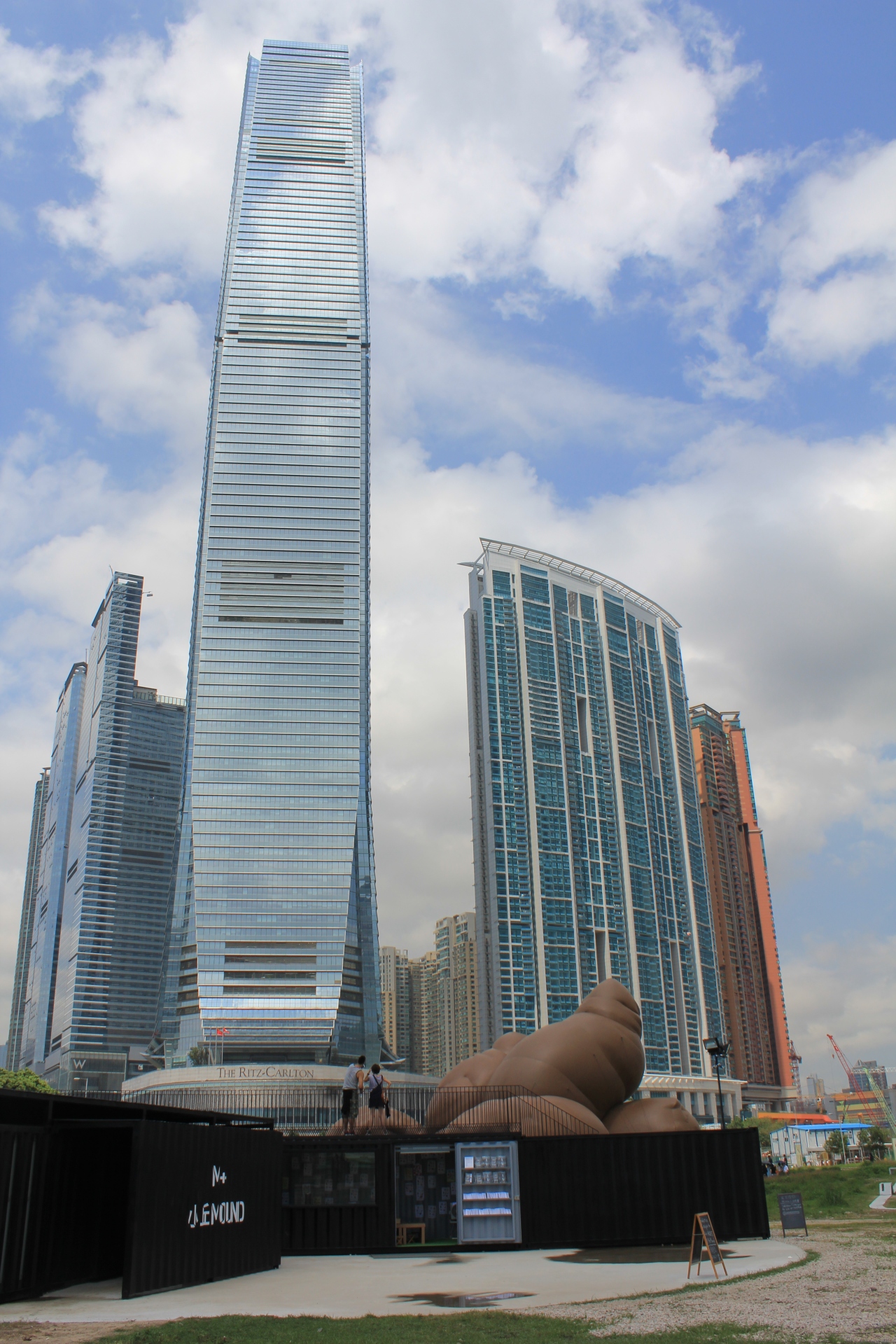 If you’re looking at this and thinking “that looks like a giant pile of poo”, you’re right, that’s exactly what it is! Well, the inflatable kind anyway which is definitely a good thing in the 30 degree day. 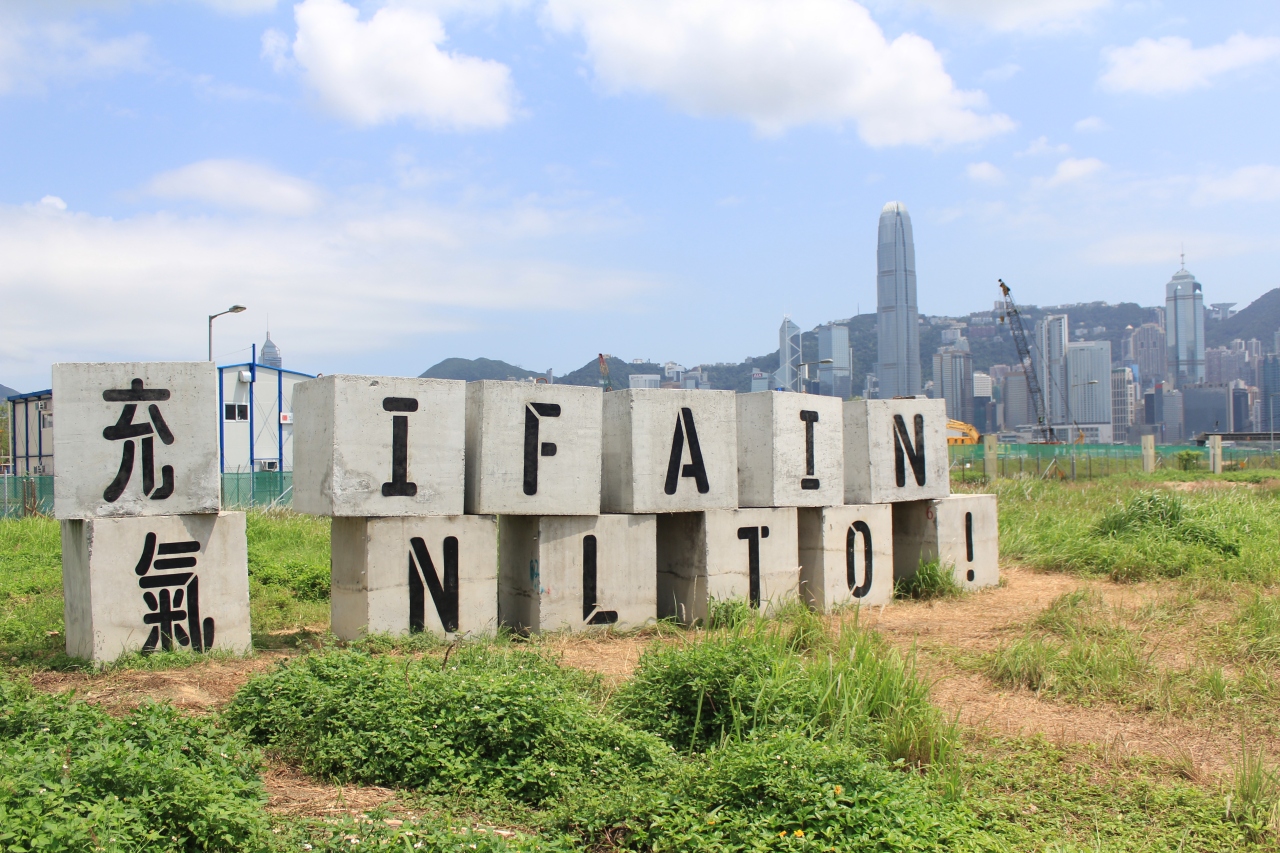 “Mobile M+: Inflation!” is one of a series of pre-opening “nomadic” exhibitions curated by M+, the new museum for visual culture currently under construction at the West Kowloon Cultural District.  The works, according to the M+ website, are meant to “explore the ever-changing notions of nature and artifice, intimacy and monumentality, permanence and temporariness, as well as beauty and the grotesque in the realm of constructed landscapes.”

Enough of a mission statement, let’s check out some poooooo!

Just how big is this poo, exactly?!  In the interests of scale, H-J got up close and personal.

Its not all just shits and giggles at the waterfront.  There’s also a gigantic piggy, complete with apple eyes and meaty insides. 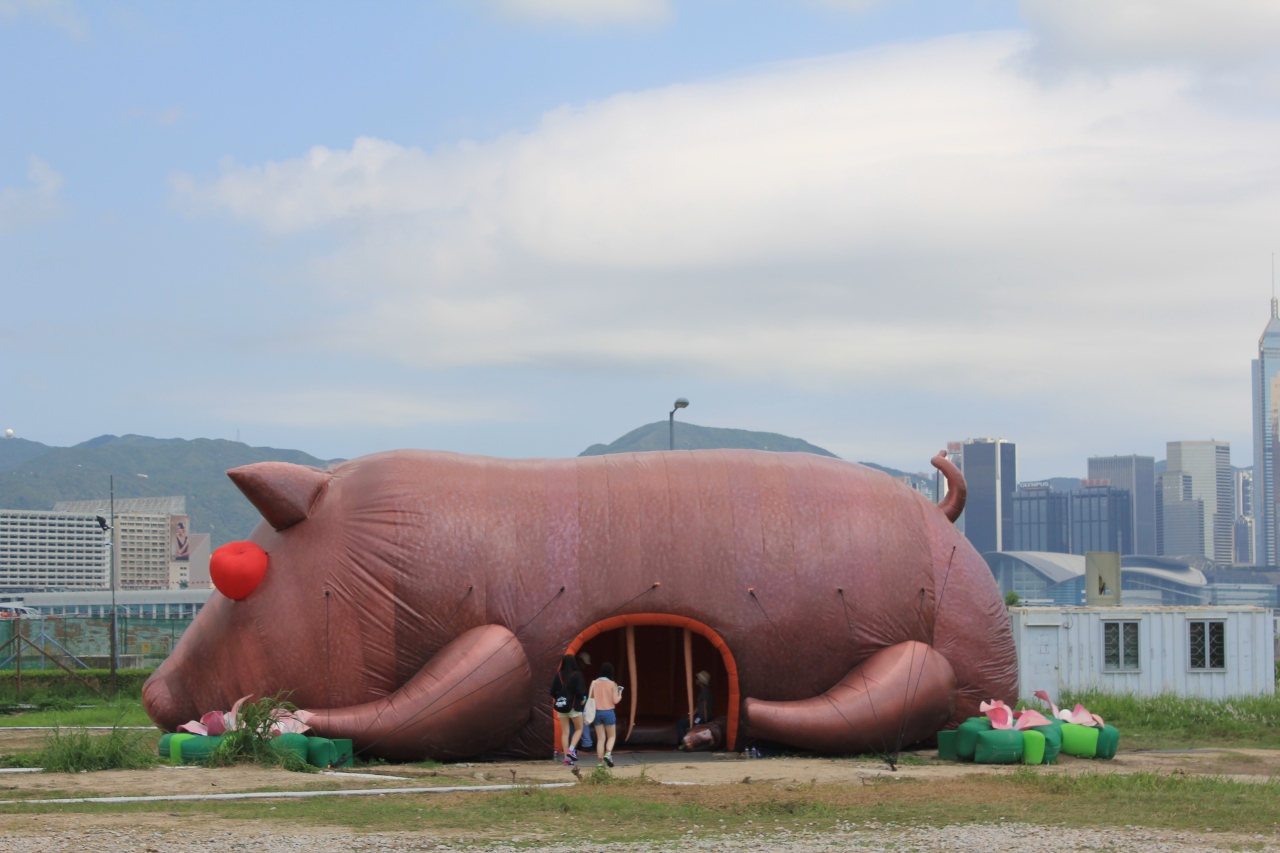 Upon venturing in through the porky ribcage, one can rest upon inflatable cushions complete with photographic overlays of bacon, mince and other porcine products.

Bugs and legs were up next. 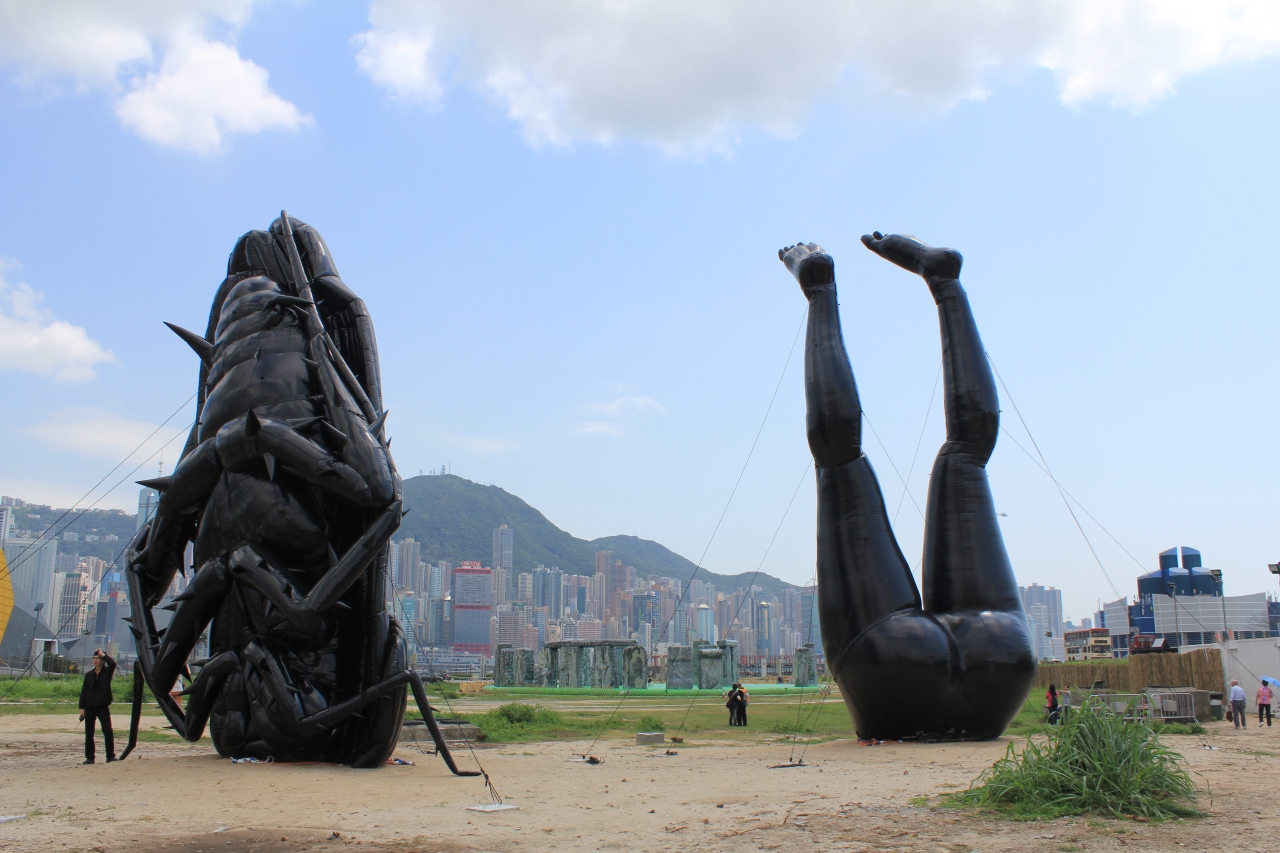 A bowl of water is placed in front of these inflatables, allowing for some cool perspectives/illusions if you feel like crouching down.  Cause half a gigantic upside down body and a giant bug aren’t cool enough by themselves?! 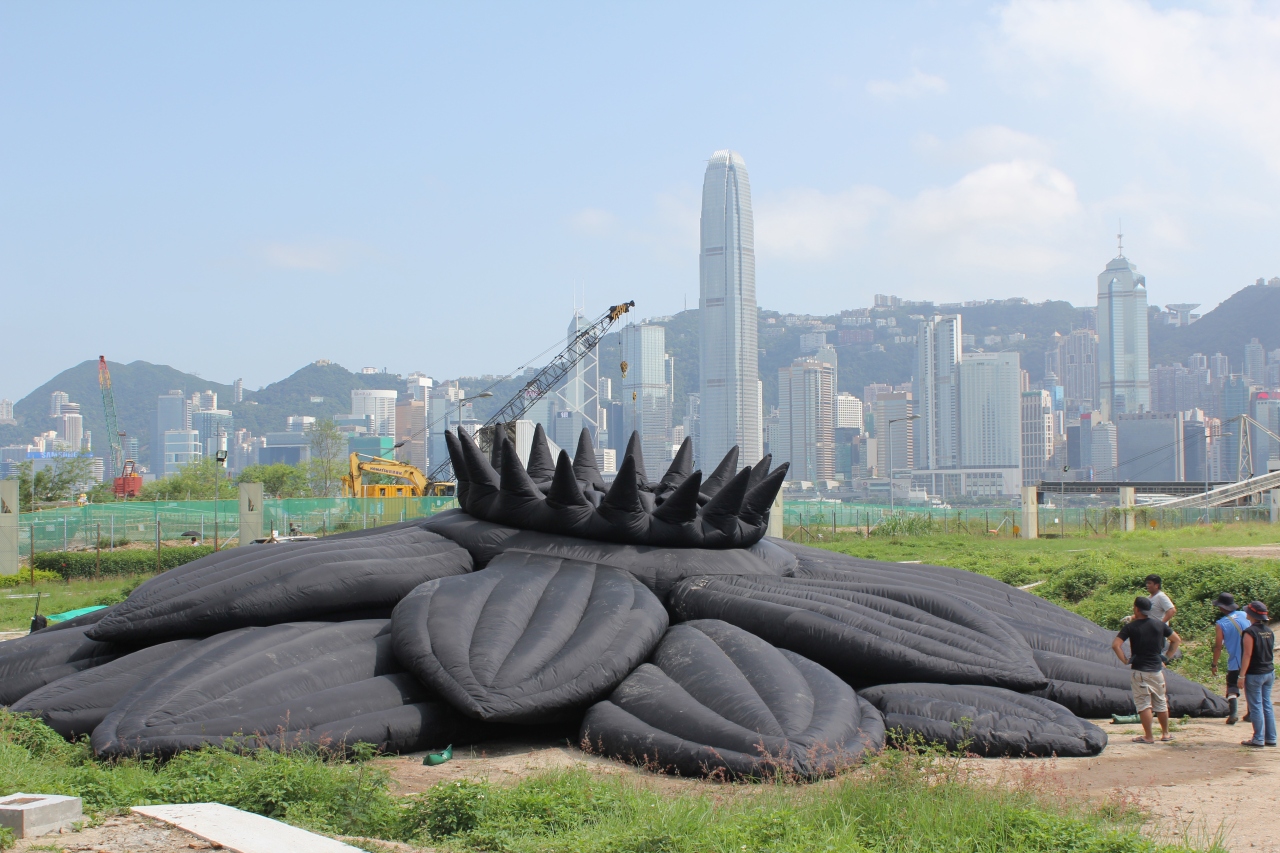 We’re sure you’ll all agree that one of the suckful things about being a ‘grown up’ is that you’re not allowed to do lots of stuff that looks really fun, like jumping on bouncy castles. That is, unless you’re slightly rich/bonkers and can afford/justify hiring your own.  The rest of us mere mortals watch children bounce with glee and harbour secret thoughts of screw driving away their fun.  Not today though – this bouncy delight was open to all (other than those wanting to engage in human sacrifice) and being the amazingly smart people we are visiting on a super hot weekday, we all but had the run of it to ourselves.

It was the most fun we’ve had in ages and certainly the most fun we’ve probably everhad jumping around like crazy folk while sober.  Awesome does not begin to describe it.  We’re convinced that if everyone was forced to engage in this kind of activity at least once the world would be a well more chilled out place.  Oh and we felt justified in skipping the gym today – its quite a workout bouncing around like an idiot for half an hour!

Appetites duly worked up and sweat glistening on our brows, our eyes were caught by the promise of Food and Drinks in a humble looking trailer just beyond the ‘Henge. 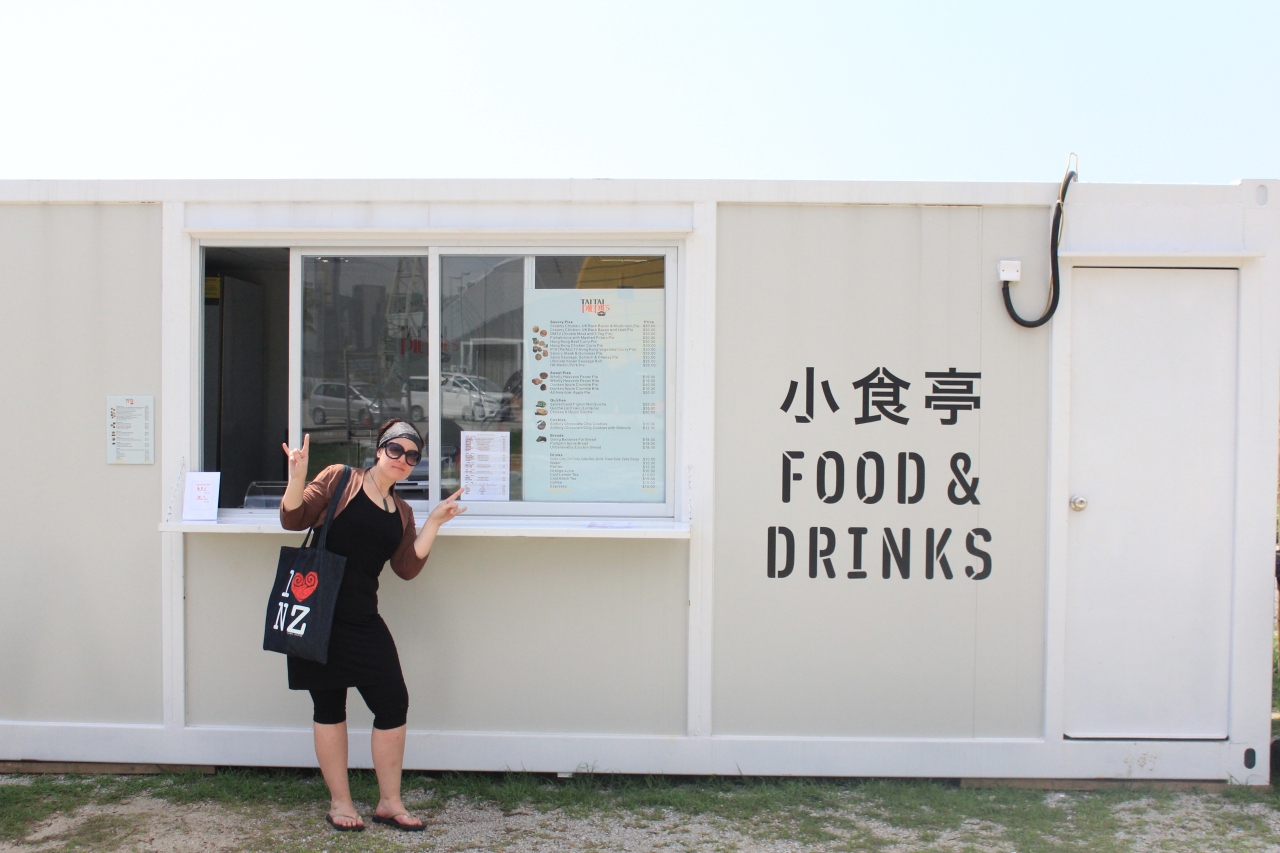 What lay inside this discrete package was far, far greater than we ever would have guessed or dared to imagine on the waterfront of Hong Kong.

Pies.  Yes, PIES.  True blue meat pies.  In a queer twist of absolute serendipity the one that H-J randomly ordered even had a little pastry caribou adoring its golden top.  Actually, its probably a cow being a beef pie and all, but we’re going with the theme of perfection here. 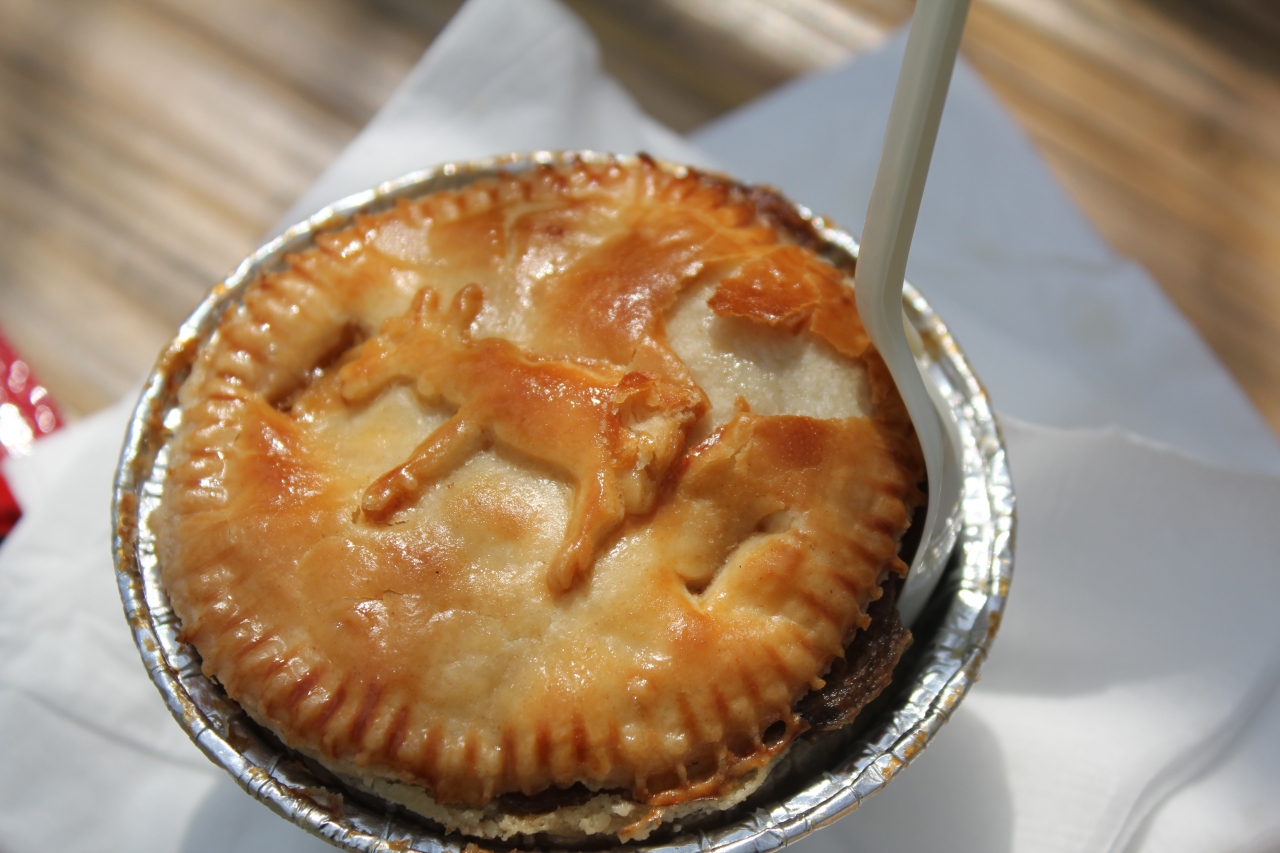 Not just pies were to be had though.  Sausage rolls too!  This was a Kiwi expat’s dream. 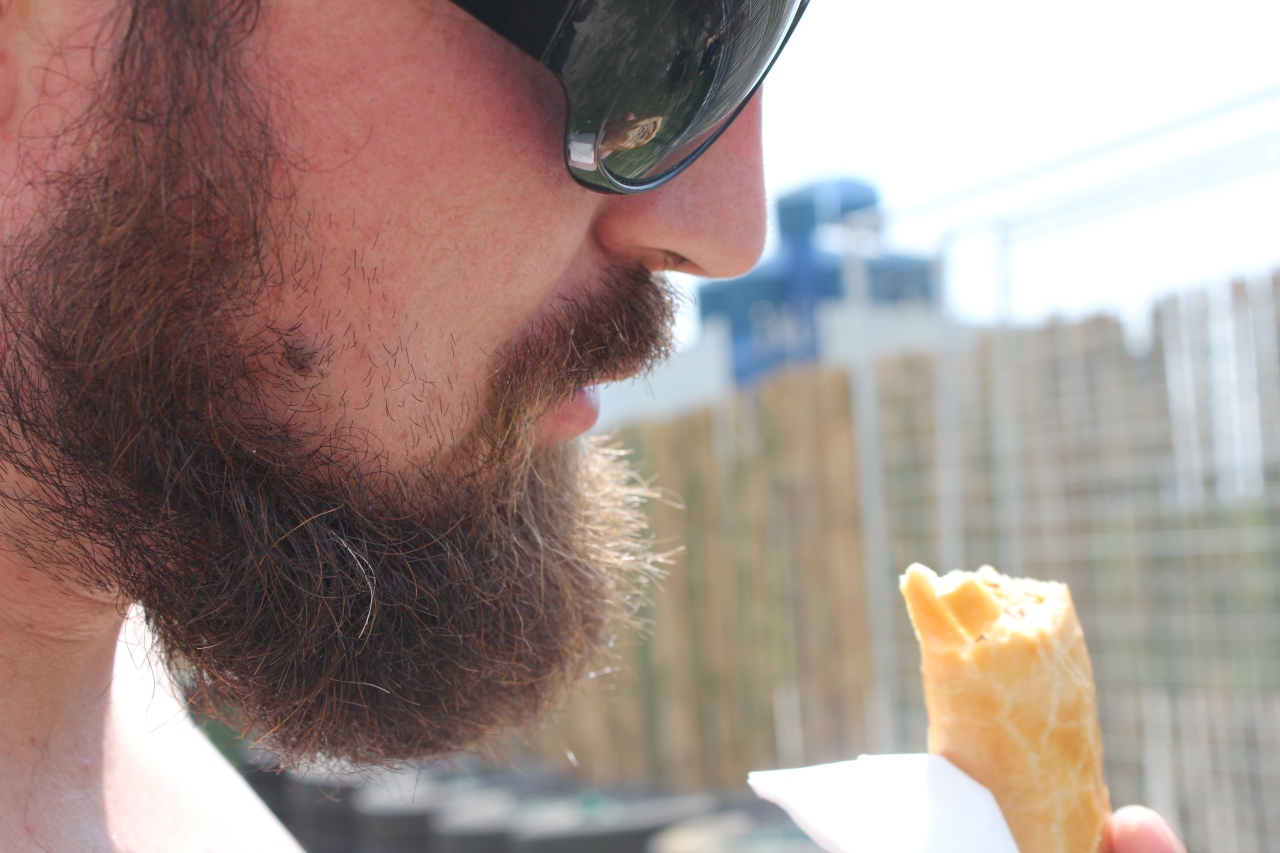 Piles of poo, a bouncy castle for adults and meaty pastry delights.  Does life get any better than this?!

Thanks Hong Kong for a wildly unpredictable and incredibly incredible day.

And should you want to order your body weight in pies, or learn more about the exhibition (and not just look at pictures of poo), then do check out the following:

Catch you all back in India soon to share our last few days in the north!