In the course of our adventures in our local region of Ulsan, we have come across reference to the 12 Scenic Sites of Ulsan more than once.  In the utmost spirit of adventure and trying to make the most of the places nearby we thought it pertinent to at least attempt the list.  After all, how often in our lives are we going to be trying to find things to do, on a budget, in middle-of-nowhere Korea?!

We decided to tick a couple off the list already – firstly, Ganjeoglot.  You may remember that we went there…we just went there at the wrong time of day as the Scenic Site entry actually says Sunset at Ganjeoglot.  But we figure out attempt was close enough.  Same goes for the entry entitled “Night View of the Industrial Area”.  It’s technically supposed to be viewed from some or other mountain top but we go through it at breakneck speeds on the 205 bus with some regularity so consider that we’ve seen it, and seen it OFTEN.  Haha.

On our excursion toward Gottbawi for a pie that never eventuated last weekend, we had noticed the sign boldly proclaiming PINE FOREST.   Therefore feeling totally in the know about its location, we decided that that was a good a place as any to commence our attack on the list.  Scenic Pine Forest, here we come…came? Went…whatever.  On Saturday, it was time.

We’ve learnt the hard way that things that proclaim to be biggest, best, scenic or any other superlative in Korea are best approached with low expectations.  After finding the sign again, we trudged off up a relatively unmarked road until we hit a carpark with loads of Koreans disembarking from tour buses.  Oh and surrounded by pine trees!

The Ulsan Tourism website brags that this park cherishes:

“…the legend of the queen of Munsu, and the King of Silla, who died and became a dragon to guard the nation, the pine forest boasts of the spectacular view of uniquely shaped rocks and more than 15,000 pine trees.

Overlooking the spacious blue East Sea, it is considered the second most scenic place after the Haegeum River.”

Having to research this rather confusing statement, we discovered that the Haegeum River is not in Ulsan, but Geoje Island off the south coast of Korea.  So were we to believe that this this was the second most scenic place in all of Korea? Or in the south?  Don’t even get us started on ‘spacious’…We set off scratching our heads, optimistic but keeping it real.

First stop was this map which helpfully pointed out the things to see and the paths to see them on.  Apparently, more than just trees to look at!  We set off excitedly through the forest to see what we could see…

Being a coastal area, there are a couple of old lighthouses.  Unfortunately, all the plaques are in Korean so we can’t tell you anything about them. But they were pretty!

This is when we realised that there is actually much more to this area than just pine trees (of which there are 15,000+, in case you are wondering)…not only are there lighthouses, there is a spectacular coastline with winding paths, rocks great for climbing, and gorgeous vistas intertwined with Korean legends.  Pretty sweet. 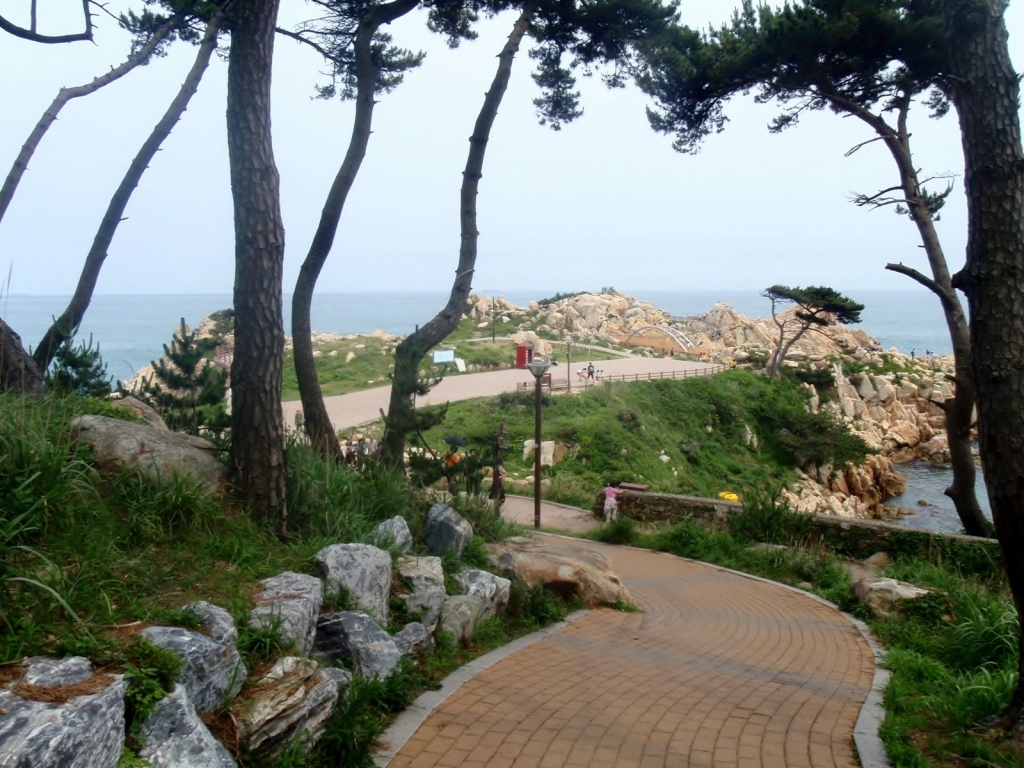 While ooh-ing and ahh-ing, we spotted an interesting look path with umbrellas and stools dotted around the bottom.  Heading down for a closer inspection, we found something very close to our hearts…

Now shit does not get ANY fresher than this.  With our exceptional command of the Korean language (waving our arms around, miming, that sort of thing) we discovered that this woman had dove for the seafood that day.  Her wetsuit was still drying on the rocks.

Unable to resist the pull of huge, freshly caught oysters, we placed our order and sat down at one of the waterside tables to await our meal. 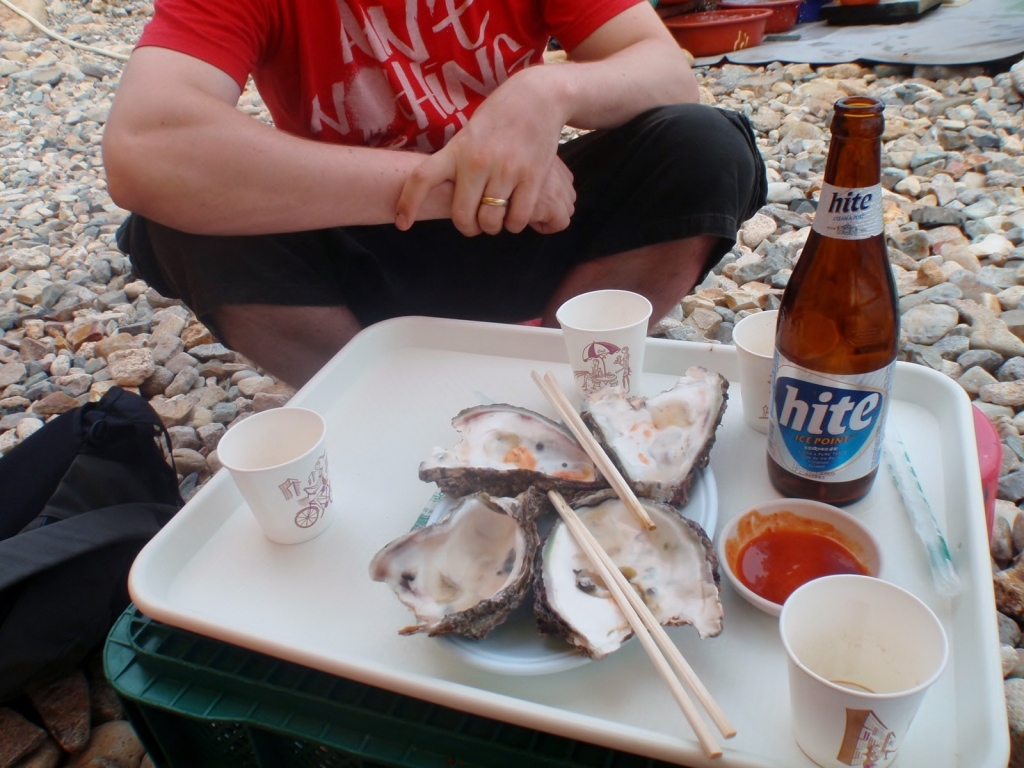 She even had a chilly bin of cold beers to wash it down with.  And made us coffee.  AND gave us some octopus off-cuts to nibble on.  Life doesn’t get much better than this.

Eventually, we pulled ourselves away from our little slice of paradise and headed back up to the main path to see what else we could discover.  We couldn’t resist a quick glance back at the bay where we’d recently dined… 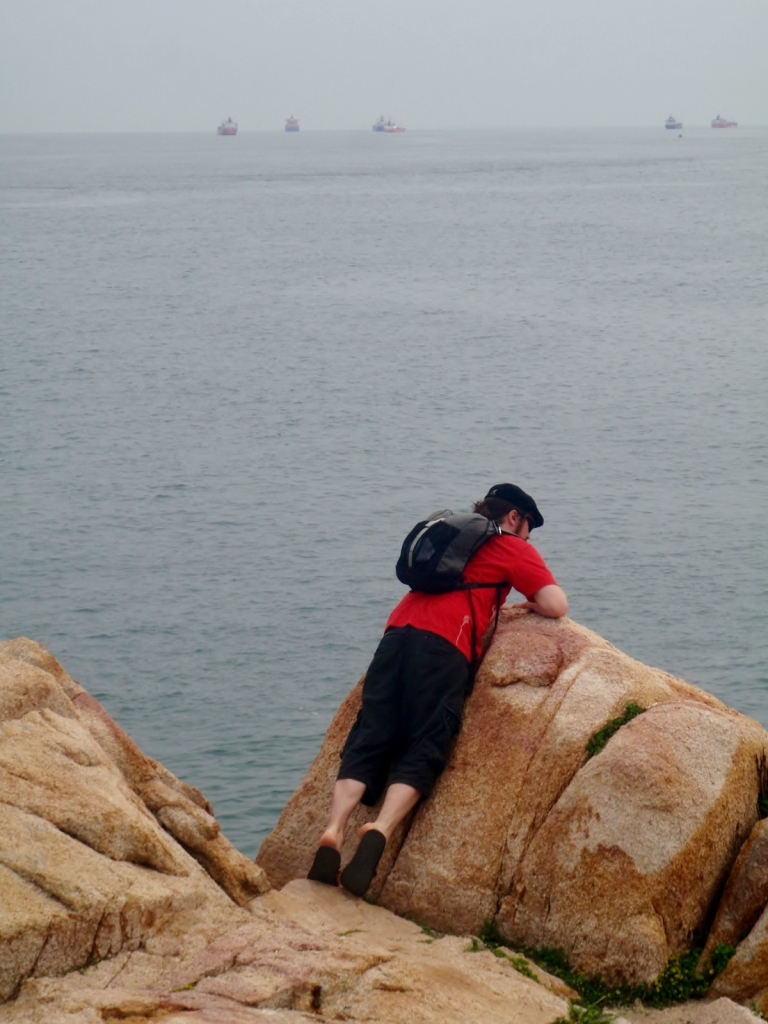 Around the next bend, a bridge appeared.  It stretched out over to more rocks but they looked pretty cool and the coastline was pretty spectacular so far. 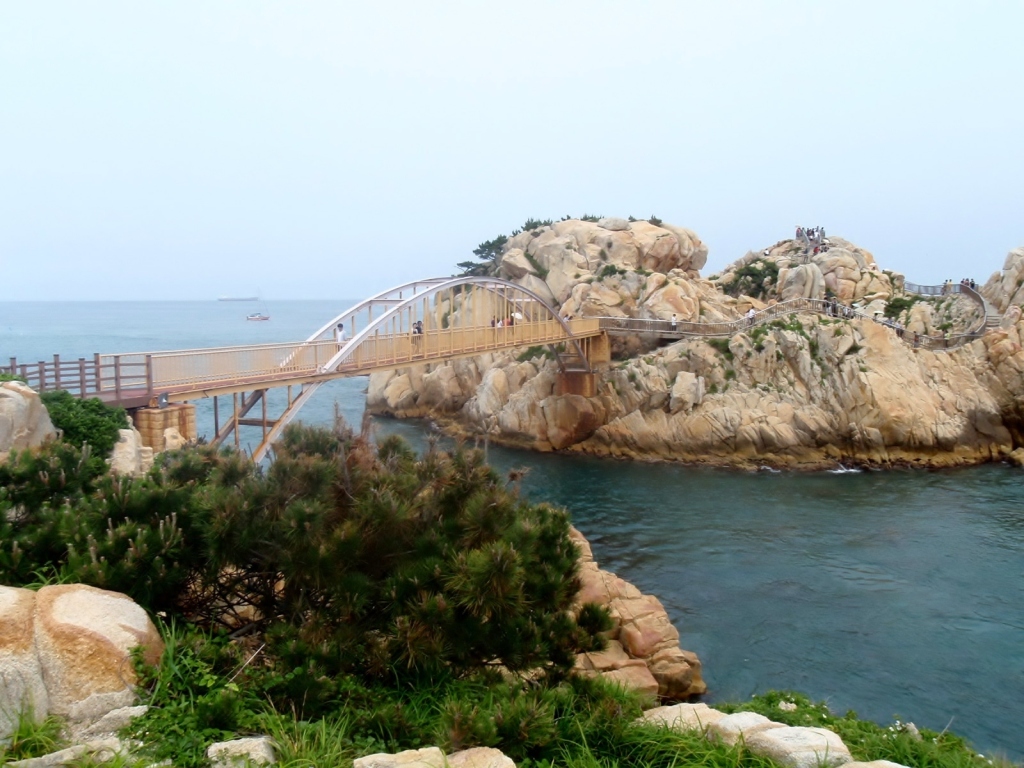 So over we went to see what lay on the other side.

Which was pretty much more beautiful views and rocks which Dan, in best Dan fashion, just had to climb. 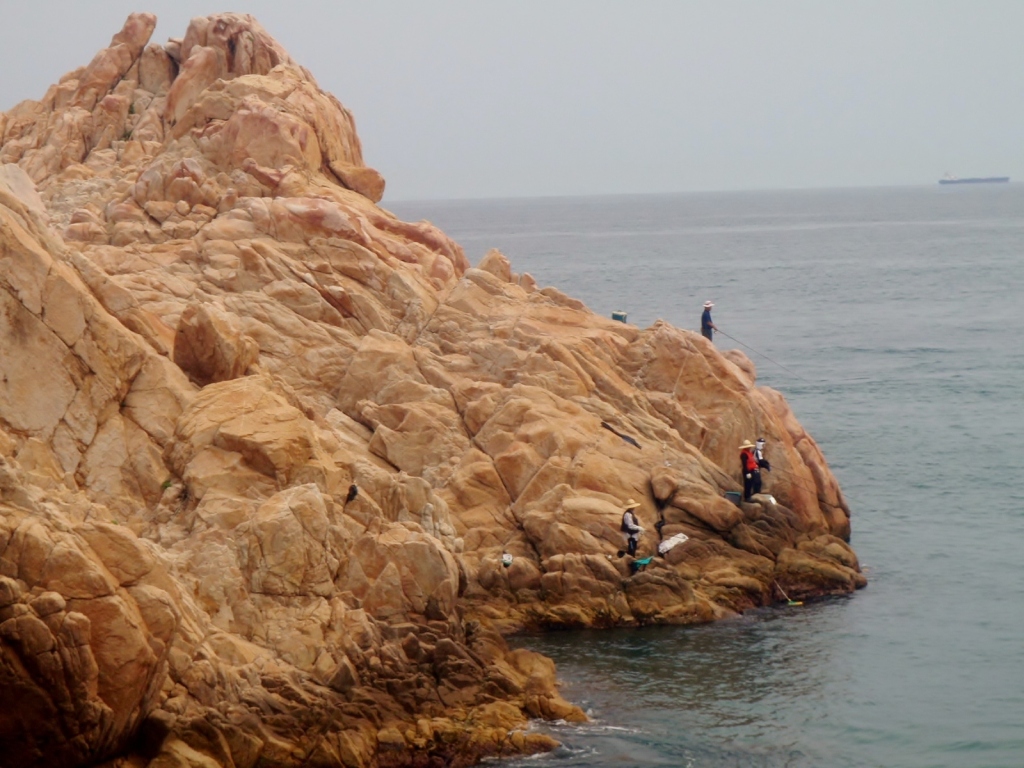 Now, normally we are not the types to include cats in our blogs unless we are mocking them or eating them.  However, just one photo as it was just such a weird location to find cats living… 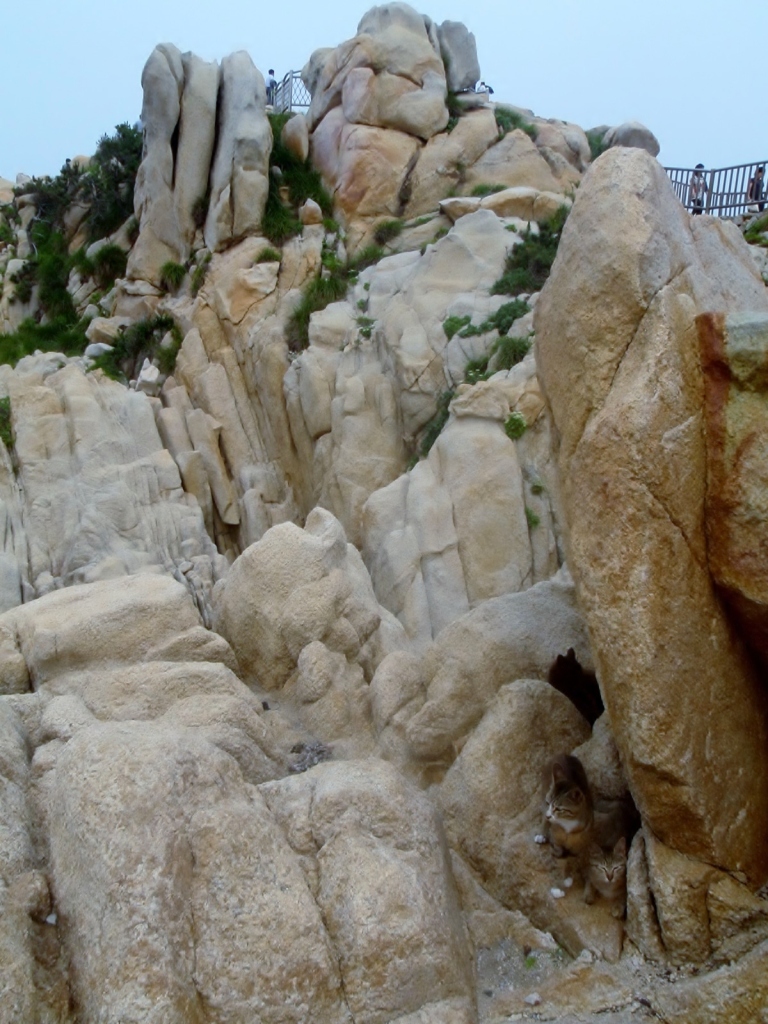 Not to be outdone, in their own cat-like way these folks climbed over the safety rope and sat down en masse to crack open a bottle of wine.  How civilised!!!

Of course, no scenic site would be complete without a bit of Korean history to accompany it.  Luckily, this sign was in English.  We draw your attention to the part that speaks of the dragon lurking under the rock to protect the East Sea and therefore no seaweed growing there…(seaweed is scared of dragons?)…

Round the next bend, we discovered a guy – precariously perched and scraping seaweed from the rocks!  We expect he probably works for the Ulsan Tourism Board.

Dragon secrets out-ted, we continued on the merry path of beauty and wonder.

And round the last bend was the stuff that’s never very far from view in Korea.

Back to civilisation and feeling pretty chuffed, we concluded that we could successfully tick a site off the list.  Daewangnam Pine Forest.  TICK.

Not content however with the success of one site in a day, we made the decision to see if we could knock another one off the list.  After much discussion and much standing around waiting for buses that never came, we decided upon a site that was kind of on the way home.  Actually, most of Ulsan stood between us and home at this stage but it still seemed like a good idea – Ulsan Sports Park.

Now, to most of us, a sports stadium and surrounds probably wouldn’t be the first thing to spring to mind when thinking of beautiful locations.  Ulsan-ites are, however, extraordinarily proud of this venue as well as the fact that the stadium played host to games during the 2002 FIFA World Cup.  So proud, in fact, that you’ll see signs cropping up in the unlikeliest of places – like the one in totally remote Jujeon Beach, which is a good two hour bus ride away, proclaiming “Training ground of Turkey, World Cup 2002”.

But we digress.  Back to the Ulsan Tourism board for another stellar claim:

“Acclaimed as the gem of the international football world, the Ulsan Munsu Football Stadium is the most frequented venue by Ulsan residents and tourists because of its spectacular scenery.  Mts. Munsun and Naman, and a nearby lake serve as natural backdrop.”

Seriously, you can’t make this stuff up. Well, WE can’t…but we don’t have to  because the Ulsan Tourism crew do it for us.  But wait, there’s more!

“With a total area of 278,000 pyeong, the Ulsan Sports Park was constructed in such a way that it would be in harmony with the natural surroundings.  In addition to the natural woods, the Ulsan Sports Park also boasts a spacious shrubbery, with 9,221 stumps of needle-leaf trees and pine trees, and a total of 233,043 stumps of Rhododendron lateritia and white royal azaleas.

As for its theme park aspects, the stone tablet of the park is installed at the center of the plaza from the northern entrance.  Other theme-orientated installations and facilities are also constructed inside, some of which are the head pine tree of a 200-year-old, a model pine tree, the Marronnier Plaza, a 2002 lakeside walkway, an ecological learning center, a rose garden, an outdoor performing center, a lakeside plaza, two mini-parks, Byeokcheon fountain, a 60m shooting water fountain, and a green grass plaza.”

We bet you’ve always wanted to know how many stumps your sports park has.  And does YOUR local sports park have a model pine tree?   And what exactly is the ‘head tree of a 200-year-old?  So off we went in search of some answers.

All piss-taking aside, the place does look pretty impressive even from the outside.  The stadium is a dominating vision on the landscape. 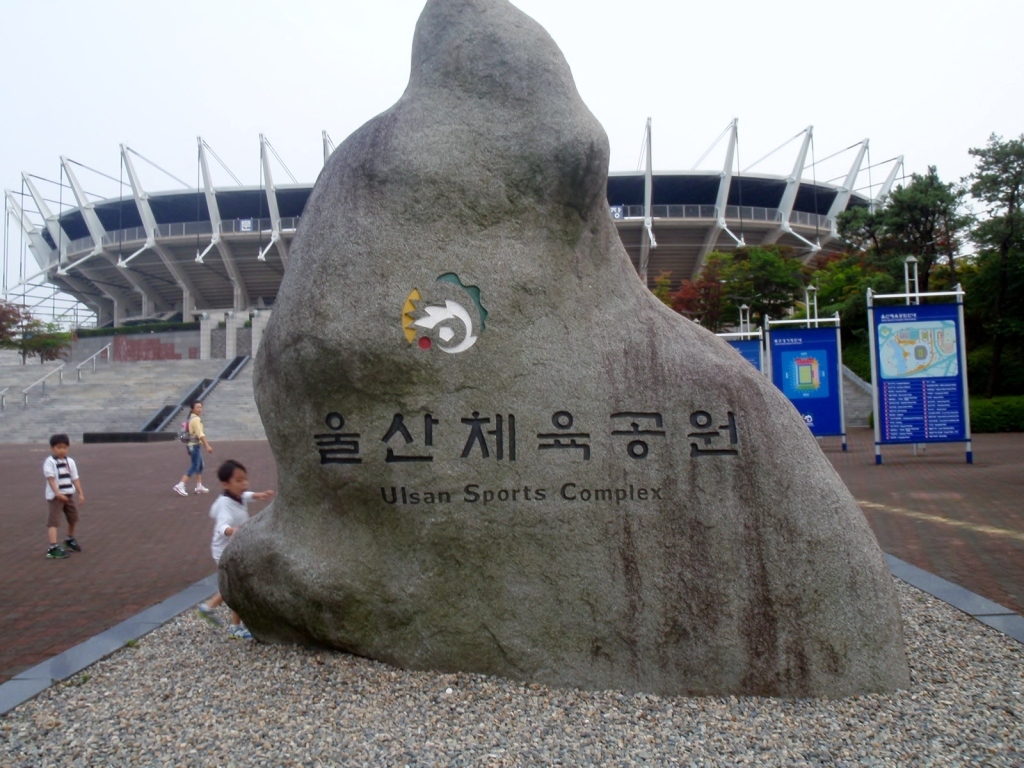 Even the flower pots are appropriately football themed.

Eager to explore, we walked into the complex and were quickly ushered towards…something.  A large line was formed, heading down to an outside auditorium.  We were handed a programme which was filled with sheet music – um…Ulsan Tourism didn’t mention any sing-a-longs!  What was going on?  Oh well, we thought, we joined the line and were jostled into position in front of a huge stage, with lights, cameras and thousands of people. 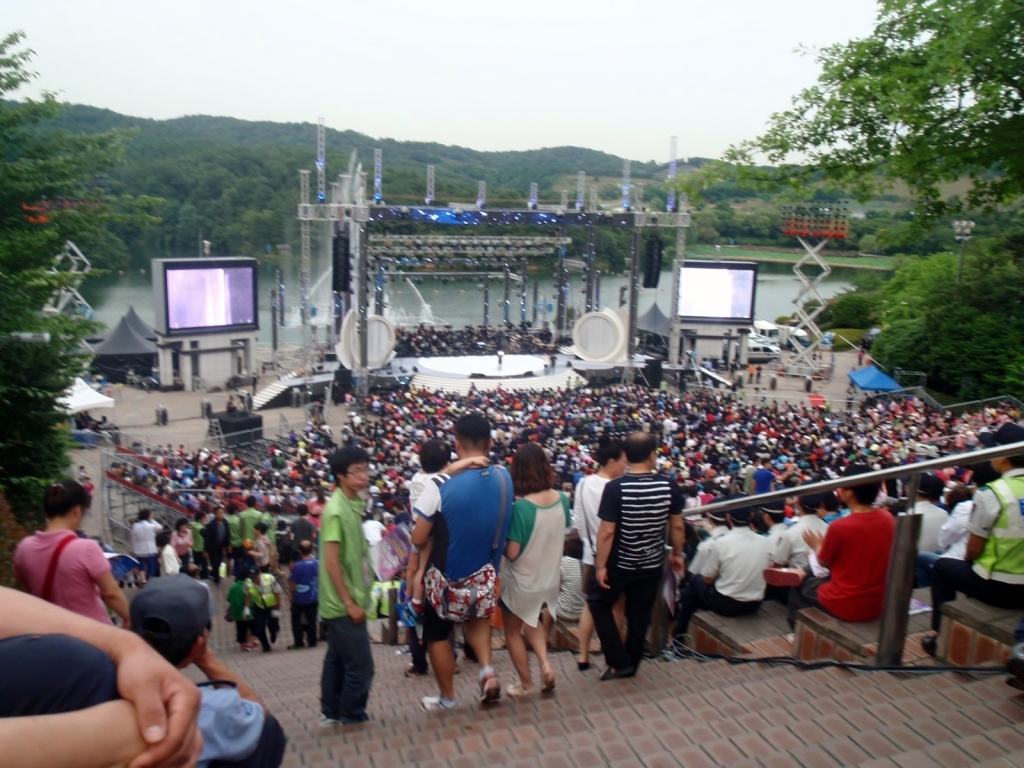 Turns out we were bang on time for whatever this was.  We had been standing there less than a minute when the crowd erupted and performers started rocking out Korean versions of songs like “Maria” by Blondie. 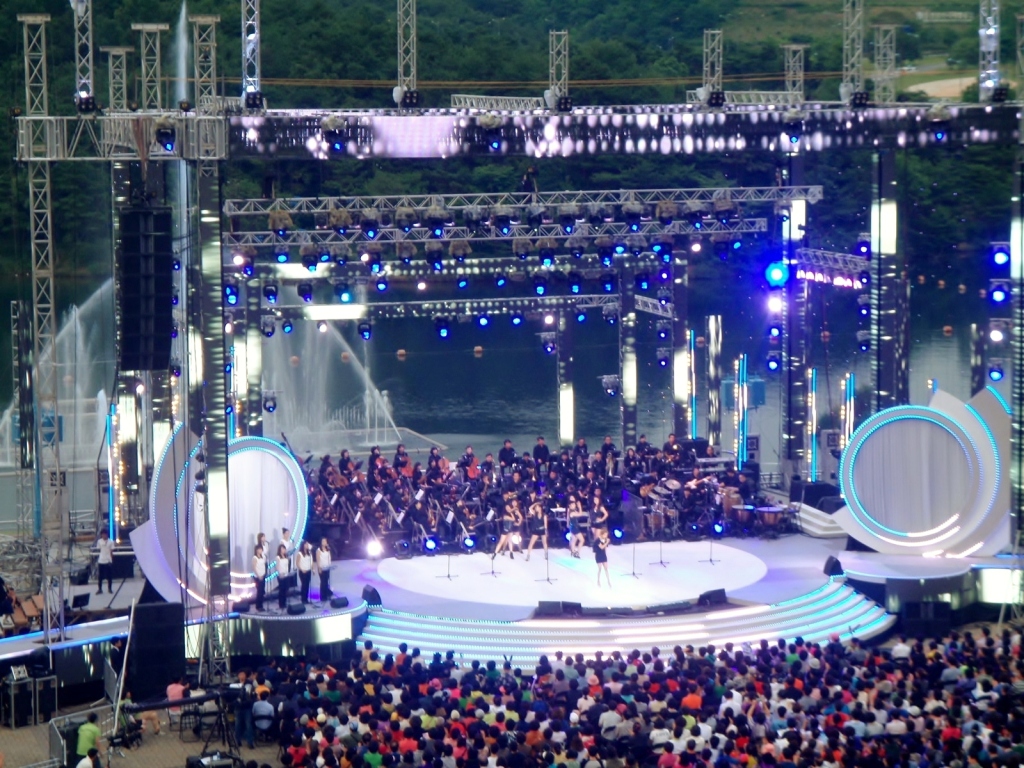 After staying for a few more bastardised songs, it started to segue into more K-Pop sounding tunes…not really understanding anything going on around us, we made a  hasty retreat toward the exit.  Which we discovered had been blocked off so as not to let more people in.  What on earth was this?!

After finally escaping, we noticed another line had formed this time leading into the actual stadium.  Not ones to ever learn a lesson and keen to see inside the World’s  Gem of a Football Stadium, we busted on in with the crowds.  Its a pretty decent sized stadium, which we imagine has a fairly electric energy when its game time. 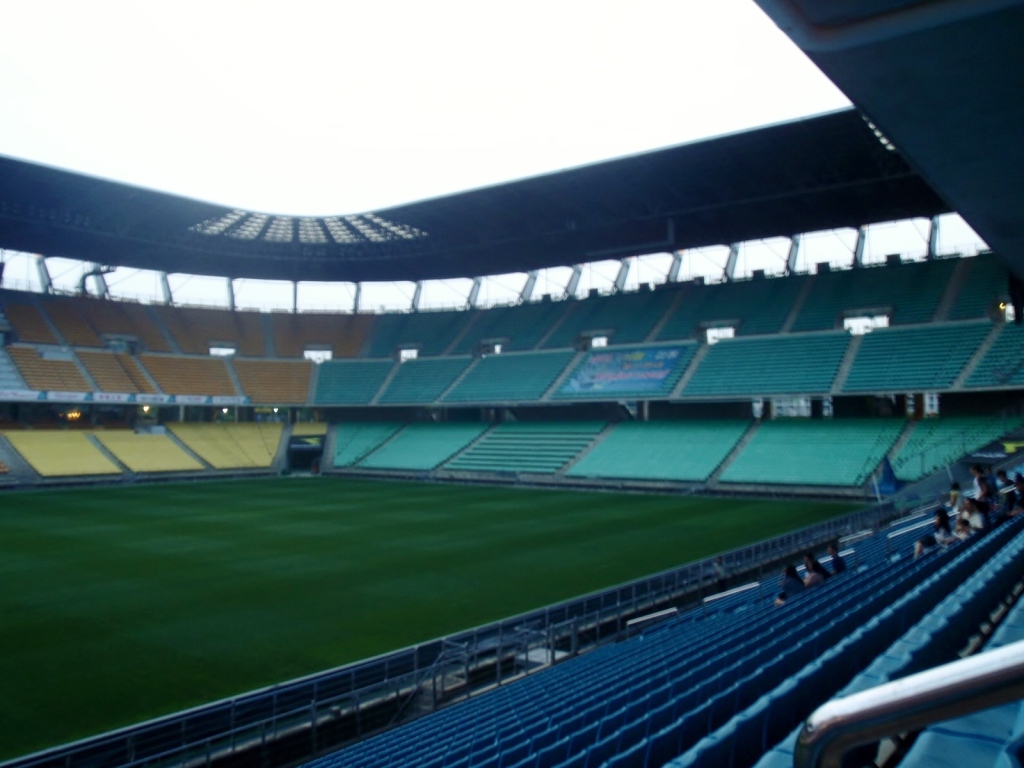 And then we noticed that on the left side of the stadium, a huge screen was mounted, showing the concert we had just escaped from.  Inadvertently, we had stumbled into the over-flow seating for the concert.  An English speaking local quickly be-friended us and filled us in on the fact that this was the KBS (Korea Broadcasting System) star studded weekly concert, that beams its way into the homes of Koreans every Sunday night.  He looked up at the screen, sighed longingly and said, “I wish I was over there at the concert.  I got here too late.”  We hid our guilt and made polite conversation.  Oops.

After forty minutes of faking our enjoyment and Dan being showed the entire contents of the man’s photo gallery on his Smartphone (“This is me in Mongolia.  This is me in Beijing.  This is a ship I bought.  These are nuts and bolts on the ship.  This is an orange traffic cone.  This is the inside of my apartment…”) we extricated ourselves and made for the last bus back to the village.

We’re giving ourselves a TICK for having completed the Scenic Site of Ulsan Sports Park.  Though we think a return visit may be in order to experience the model pine tree and river we missed. 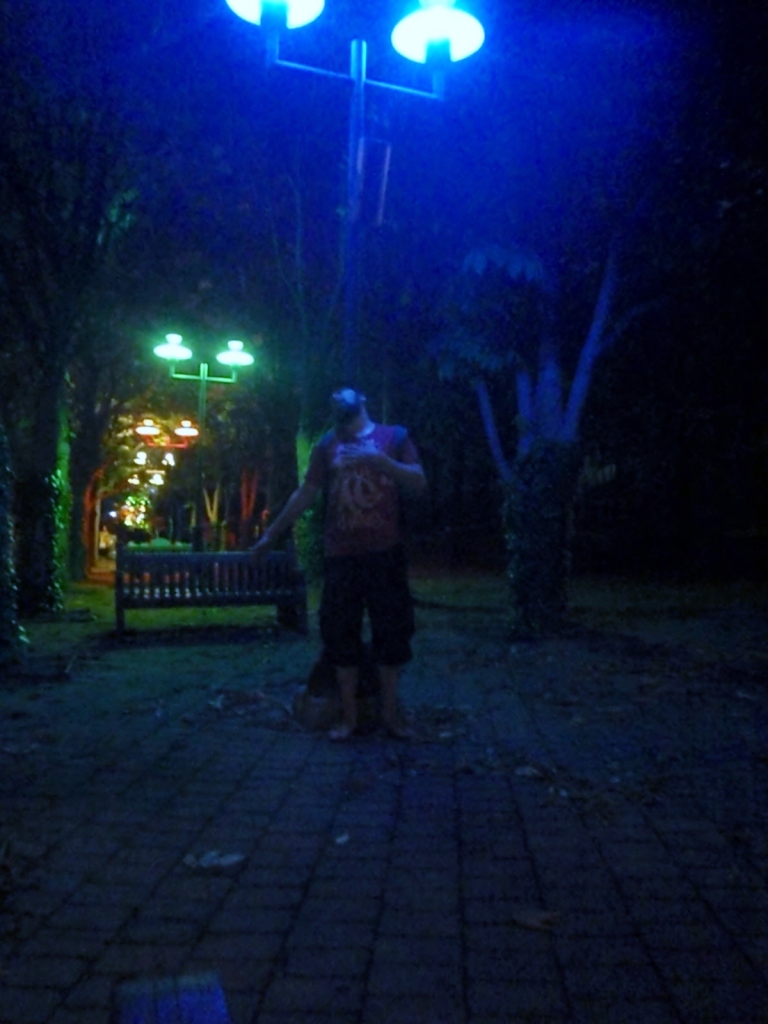 Two of the sites in one day was a pretty good effort for us little country-dwellers though.  How many could we get through on Sunday, we pondered….