When you are down and have spent all your won on ice cream and love motels, it is always nice to know there is a place just up the road where the people are cheerful and the food is cheap… this the place we call the “cheap and cheerful.”

These “gimbap” (more about that soon) restaurants are to be found all over Korea and are the go-to places for locals and ex-pats alike as they serve tasty, inexpensive “fast” food.  The range is generally quite good too, everything from fried cutlets to more Korean fare like tofu soup.

This is our local, a place we find ourselves frequenting these days not just when we’re feeling poor but also when we’re just hungry and feel like a quick, easy dinner.  The ladies who work there are extremely warm and fuss over us like mums, which is nice when you’re far away from home.

The menus at these places are always in Korean.   There are only a few pictures on the wall so for the first wee while, admittedly, we would just point at these by way of placing our order.

As you can imagine, this made for quite a limited selection so the language of food has quickly become our priority of learning!  Now we can fumble our way through most things on the menu – which is great as every time we go we’re discovering new dishes.

The standard menu item and namesake of these sorts of establishments is gimbap (김 gim, being seaweed and 밥 bap meaning rice) which at first glance may look like sushi.

While certainly influenced by its Japanese cousin, there are a few key differences, the main one being that the rice in gimbap is not the sweet, vinegared kind.  It is also not generally served warm.  The other key difference is that the fillings tend to be wildly different in composition from sushi.  As a base they generally contain damuji, a yellow pickled sweet radish, some carrots and some type of greens.  There is more often than not a processed lunch meat (Spam?) lurking inside.  Some kinds have tuna, some have processed cheese, some drip with mayonnaise, others with beef.  It really does seem a far cry from the delicate flavourings of sushi.  But its cheap, its tasty and its available everywhere.

The rest of the menu falls into two main parts – the 식사류 Shik Sa Ryu ‘meal selection’ and 분식류 Boon Shik Ryu, foods made from flour so noodles, dumplings, etc.  Everything in Korea, and these places being no exception, is served with a variety of banchan 반찬 or side dishes.  Most people have heard of 김치 kimchi, the famous Korean dish of fermented vegetables (usually cabbage) but there are literally hundreds of other side dishes as well.  Each restaurant will provide a plate of these prior to the rest of your meal, often replenishing throughout the course of your dining.  Most places will also vary their banchan daily so you are always trying new things.  In saying that, there is ALWAYS kimchi and usually also damuji, a bright  yellow, pickled sweet radish.

Most meals are also accompanied by Korean miso soup and there is always oodles of 밥 bap (rice) on offer.

So, onto the meat of the subject so to speak!

Perhaps the most famous staple dish, and certainly one that everyone who comes to Korea will experience at some stage (if not repeatedly) is 비빔밥 bibimbap, meaning mixed rice.  There are two main types – the standard, which comes served in a big metal bowl, or  돌솥 비빔밥 dolsot bibimbap, which comes still cooking in a hot stone bowl and has an egg on top.  Its definitely best when the egg is slightly runny…mmmm.  Essentially, bibimbap is a bowl of steamed rice, julienned vegetables, sometimes meat and always gochujang (red chili paste).  It comes to the table beautifully arranged but the beauty is quickly destroyed as you mix it all together, creating a delicious mix of hearty, healthy goodness. 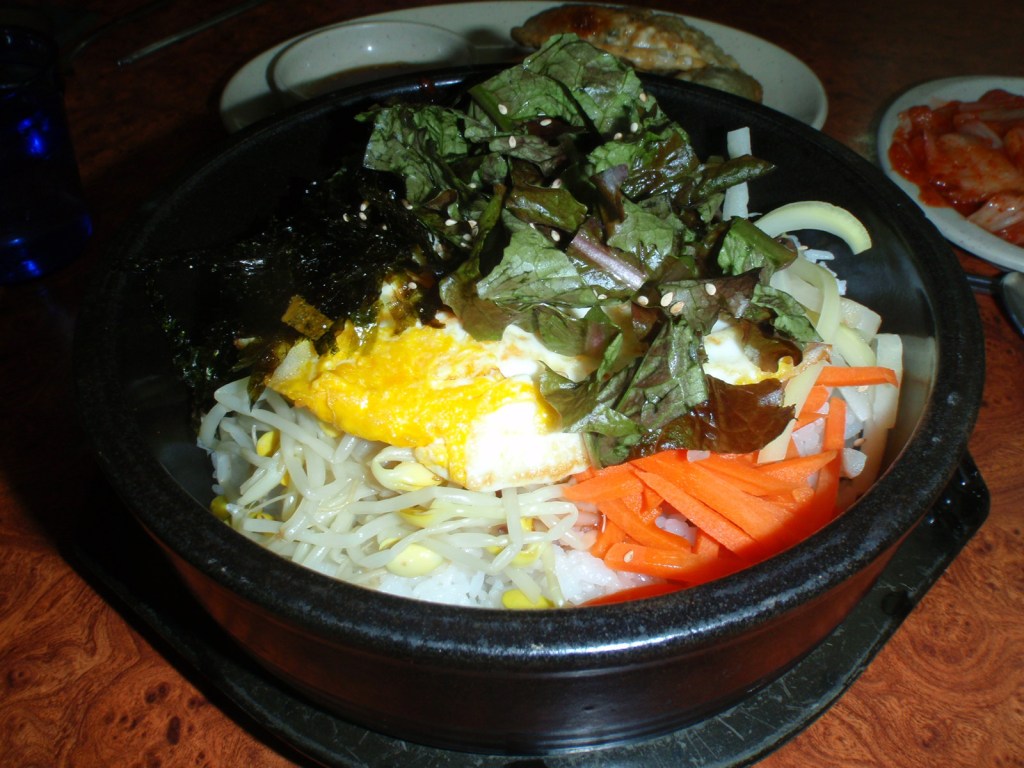 Another faithful standby is the ubiquitous 돈까스 donkkasu, which sounds, looks and tastes just like the tonkatsu you may be used to if you frequent Japanese restaurants. Deep fried pork cutlet goodness.  There are options, of course, in Korea to have it with 카레 karae (curry), with a slice of processed cheese embedded in it prior to frying 치즈 돈까스 (cheese donkkasu) or just on its tod with some rice.

If you’re starving at breakfast time, a super filling meal of 오므라이스 omu-raeesu should hit the spot.  Another Japanese/Western/Korean fusion dish, its basically a mountain of fried rice containing a scrap of vegies, all wrapped up in a thin omelet and covered in ketchup and mayonnaise.  See: omu = omelet & raeesu = rice.  Simple. 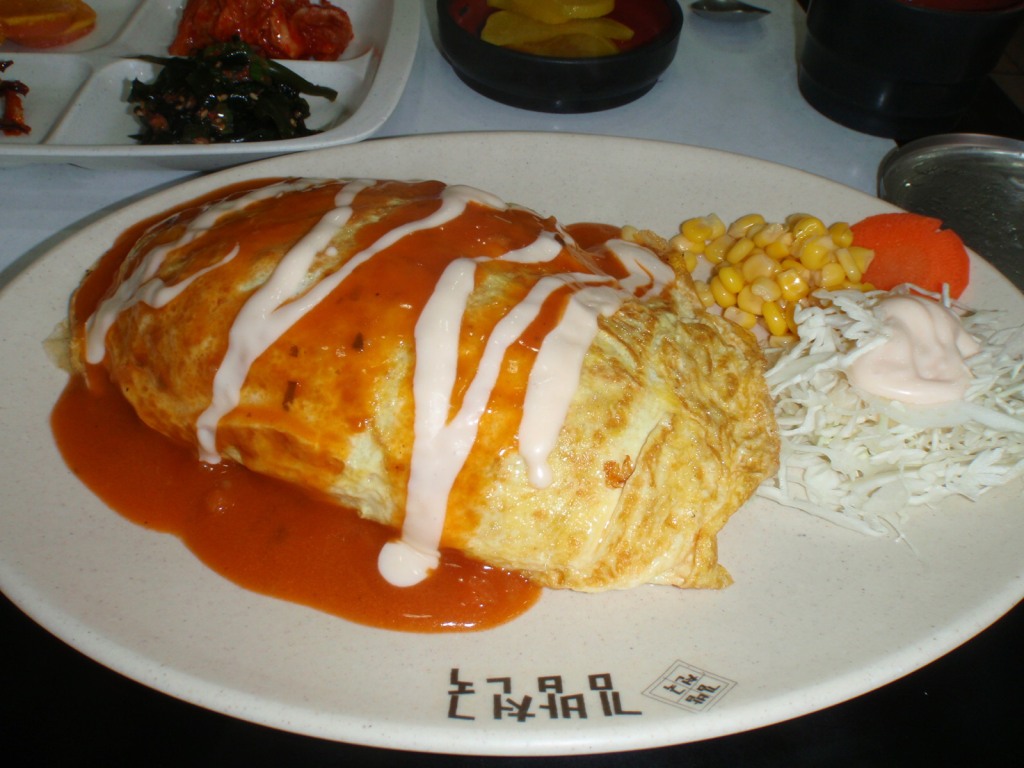 Showing yet more influence from neighbouring countries is one of our favourites, 만두 mandu, or dumplings.  These come in a variety of ways:

With kimchi, in a soup  (kinda the same as above, except the insides of the mandu are a different colour, haha).

Or even with noodles.  Carb on carb of tastiness. 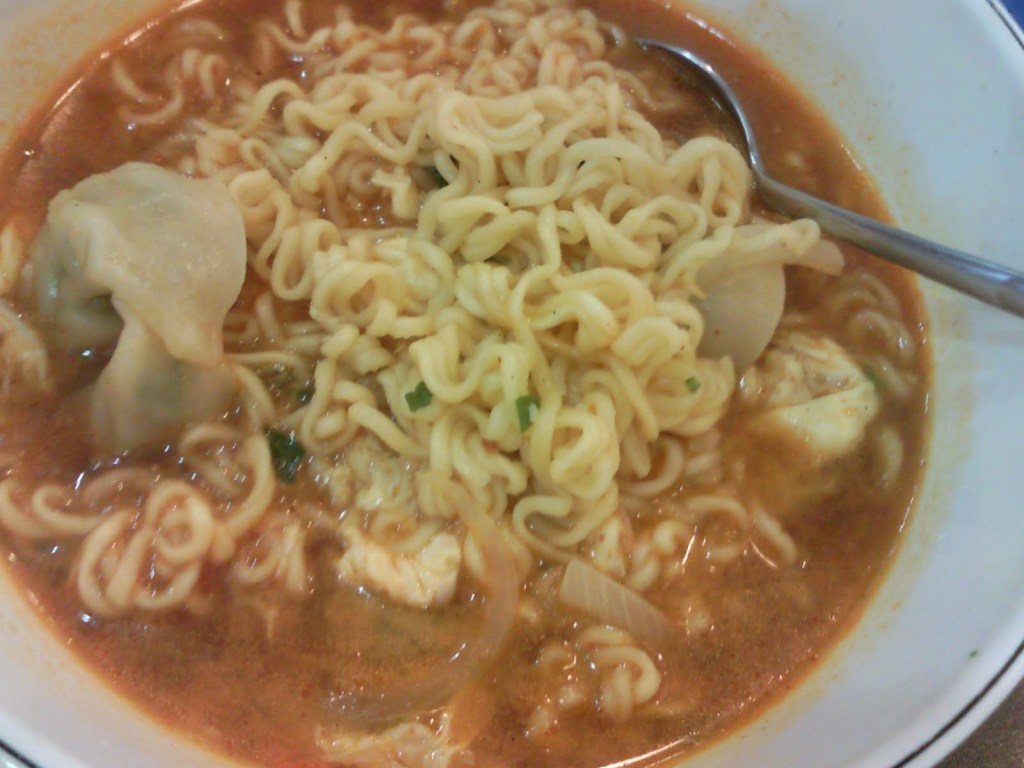 Admittedly, we have a little bit of a mandu addiction…

Another trusty favourite is  갈비 탕 galbi tang, a beef short-rib soup flavoured with green onion and garlic.  This is a great warmer on a cold night, especially when you mix in a big dollop of the gochujang to spice things up again. 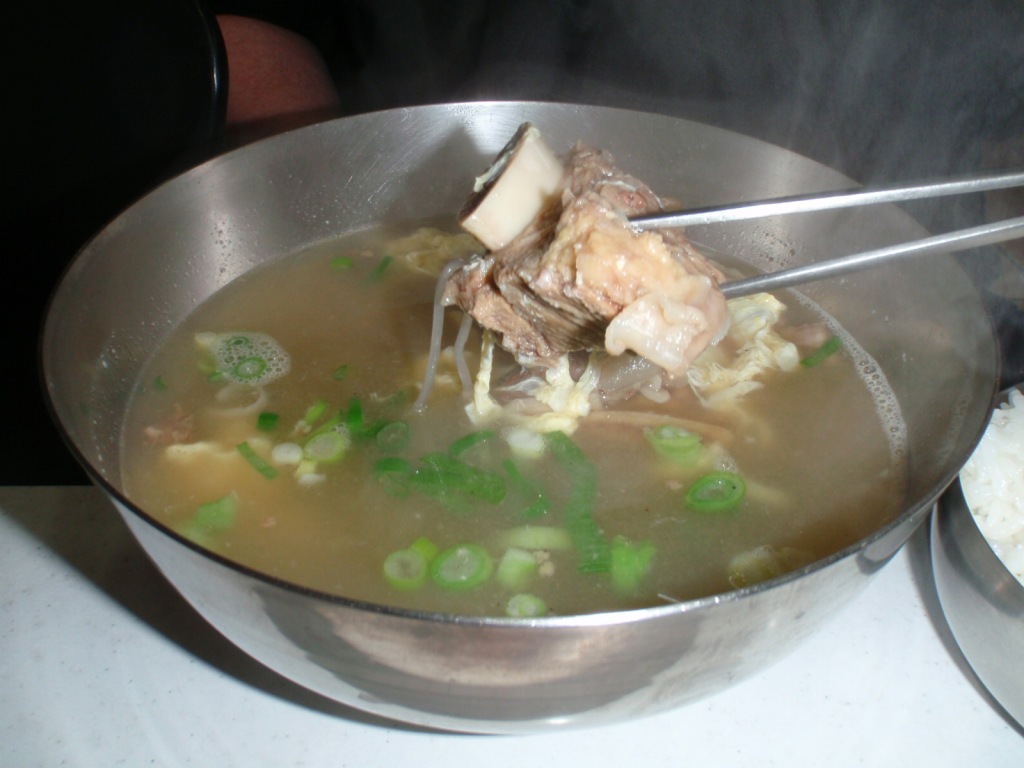 When a plate of meat and carbs is called for, nothing hits the spot quite like a plate of 볶음밥 bokkum bap or 덮밥 dupbap.  With a base of fried or sometimes steamed rice, these come in varying flavours such as seafood, canned tuna, pork, ‘random’ meat (Spam! see, its everywhere!), kimchi, topped with the good old slice of processed cheese or, more often, topped with a fried egg.  The bokkum bap tends to be stir-fried with sauce, the dupbap just topped with various ingredients.  We think that’s the difference anyway!

Koreans are known for their love of spicy food and the best example of this in the cheap and cheerfuls are the 찌개 jjigae or stews.  Our favourite so far is the 순두부 찌개 sundubu jjigae, a (usually) fiery pot of bubbling soup containing tofu, chilli peppers, clams, enoki mushrooms, onions and Korean miso paste.  Some places will omit the hot sauce if they think you look too fresh/Western – if this is the case, just ask for some extra sauce to mix through.  Delicious.  These sorts of stews are all served with a pot of rice on the side, with the idea that rice is a cooling agent.  Scoop up a half spoonful of rice, dip in your jjigae and eat – delicious!

As you can imagine from the menu, there are dozens of different dishes to try and its great fun working your way through the different textures and tastes.  If you really can’t make up your mind, a great thing to do is just order the special – and in true Korean comfort-food style, its a hotch potch of cultures, flavours and ideas.  Sometimes a little TOO many ideas when the salad dressing is in fact strawberry yoghurt (this happens way more than you’d expect).  If you’re really lucky, you often get a spoon ful of canned fruit salad on the side.

To give you and idea of quite what we’re getting at, this is the Special that H-J ordered last night.  The things we do for you readers…

Right, so starting at the left of the plate you will see gimbap.  This particular evening it was 원조 김밥, wonjo gimbap, with radish, carrot, egg, SPAM, some spinach-y stuff and some brown things. In the middle of the plate are gun mandu, or fried dumplings.  Swimming in sauce and mayo at the bottom of the plate is the trusty donkkasu.  Next, we have a salad of spaghetti (yes, JUST like the dried stuff you buy at home to make spag bol) topped with a variety of vegetables and whole lot of super hot sauce.  This is another mix-it-all-up dish, called 비빔 냉면 bibim naengmyeon.

The final item on the plate is to be found lurking on the corner of every plate you will ever buy from one of these sorts of places – a sad little pile of raw cabbage and tinned corn, topped with, thankfully in this case, mayonnaise.  But quite often yoghurt.  And sometimes strawberry flavoured yoghurt if you’re really lucky.

The special comes also with the standard banchan and cup of Korean miso.  Its a huge meal and for around $5 its certainly good value.  So if you want to sample a bit of everything in one foul swoop, the special is a very ‘special’ way to do it!  Just be warned, it isn’t always the most complimentary plate of items.

This is by no means an extensive or all encompassing list of what you’ll find at the local cheap and cheerful but covers the basics and a few of our favourites.  We can often be found hanging up the road, being fussed over by the local ladies.

One item that continues to amaze and intrigue us on our adventures in Korea is noodles.  Nothing fancy, nothing handmade (well,not in these sorts of establishments anyway), nothing particularly interesting – just noodles, suspiciously like those you would buy in a Maggi packet as a poor, hungry student.  It feels really weird to sit down and pay for these in a restaurant…so we don’t very often.  Unless its with mandu 🙂