Wishing Hell – more from the depths

To date, most of our posts have been tales of happy, fluffy adventures showcasing beautiful sights and interesting experiences.  We have only really touched lightly upon the day-to-day aspect of the reason we are in South Korea – teaching English.  Occasionally, however, one feels the need for a cathartic rant.  And today is one of those days.

Today’s school day began with a rather bewildering conversation.  It occurred when I couldn’t print worksheets or games off the computer because it was going so slowly that the pages would time out before they could load. Goody. When I mentioned this to K2, I was told that she “had spoken to an engineer and its because the internet goes slow when the weather is cold”.  Um right…does that mean countries like Canada and Denmark don’t use the internet that much?   And how about the fact that the internet is working fine on both the phone in my pocket AND my house 100 metres down the road?  Yeah bitch, I’m sure its ‘the cold’ and nothing to do with the fact the browser is so ancient that half the internet can’t be accessed.  Sigh.  A great start to the day. 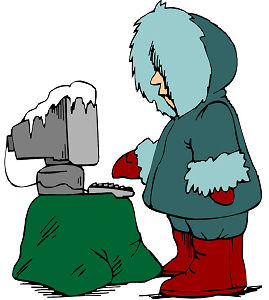 It did, however, get me inspired to share some of the special features of working at my lovely hagwon.  Some aspects are apparently quite common at other hagwons too.  It really is luck of the draw it seems as to the combination of similar aspects teachers are lucky enough to encounter in the various different schools.  These little idiosyncrasies really make going to school each day a joy.

In no particular order here are some of my favourites:

1. I am studiously ignored by the other staff who all speak Korean continuously.  This extends even as far as being told I have to attend meetings and lunches a couple of times a month, for which I have to be at school two hours earlier than normal (without pay) to then sit there while everyone else speaks.  I am yet to figure out what the value of my being at these meetings is.  I am bored out of my brain listening to people speaking Korean and not interacting with me at all.  Aside from the fact its damn rude, its also pointless.

This also happens day-to-day during school.  If one of the teachers is in a room with me by herself, she MIGHT deign to speak to me.  Otherwise, its two Korean women constantly chatting and cackling, internet shopping and being generally oblivious to the fact that there is a peer in the room.

2.  I am often required to go to school early (as above) to attend meetings or lunches and am usually told at completely the last minute and more often than not arrive to find no one else there and/or sit there waiting for up to an hour for said meeting or lunch to begin.  Just prior to Christmas was our school’s market day, where kids exchange reward stickers they have earned through the year (or been bribed with in my case) for snack and stationary options.  On this particular day I was asked to be there at 12.30pm which I duly did.  K1 and K2 swan in a few minutes later and then start fluffing around organising the rooms for the market.  I ask what I can do.  K1 tells me to move a chair.  Which takes, oh, 5 seconds.  So I ask what I should do now.  She then fluffs around some more and then goes to the other classroom.  I follow her in there and ask what I can do.  I move a table.  And then I ask again.  K1 tells me to wait.  So I wait in the teachers room.  I stand there.  I wait some more.  I stand there.  K1 walks past a couple of times and grins at me.  Everyone except me is busy.  K1 comes in at 12.50pm and says, just relax you don’t need to do anything.  I say to her you told me to be here at 12.30pm.  I ask so why am I here then?  She grins.  And tells me to go help K2. I walk into the room where K2 is and say “K1 told me to come help you.”  K2 says no.  I say “no?”.  She says no.  I storm back into the room where K1 is and ask what time she ACTUALLY wants me to be here because K2 doesn’t want my help and I’m going home. Her and K2 then ignore me for a few minutes while talking quietly in Korean and then she grins at me and says “1.40pm”.

I arrive back at nearly 2pm (I figure it probably won’t matter and I’m right) and proceed to DO nothing except hand out cups of Coke to the students all day.

This is quite typical.

3. My school is run down and quite grotty.  The toilets often don’t have toilet paper and “cleaning” here seems to involve just hosing the entire place down, leaving it soaking but not looking much cleaner.  The Western toilet is usually blocked and/or covered in little girls’ pee.  Mmm.  The other toilets are squats which combined with a usually wet floor don’t seem like a great option in the middle of a school day, dressed for work*.  The computer, as alluded to above, is an ancient box with a server so old that I can’t check my emails on it.  This makes it quite hard to prepare anything in advance and email it to myself.  The school also has ever varying aromas ranging from stinking fish (which makes me NOT want to visit the fish restaurant downstairs in the building), to sweaty feet/children from the Taekwondo studio we share a floor with, to the general chemical waft of a South Korean village.  Delightful. 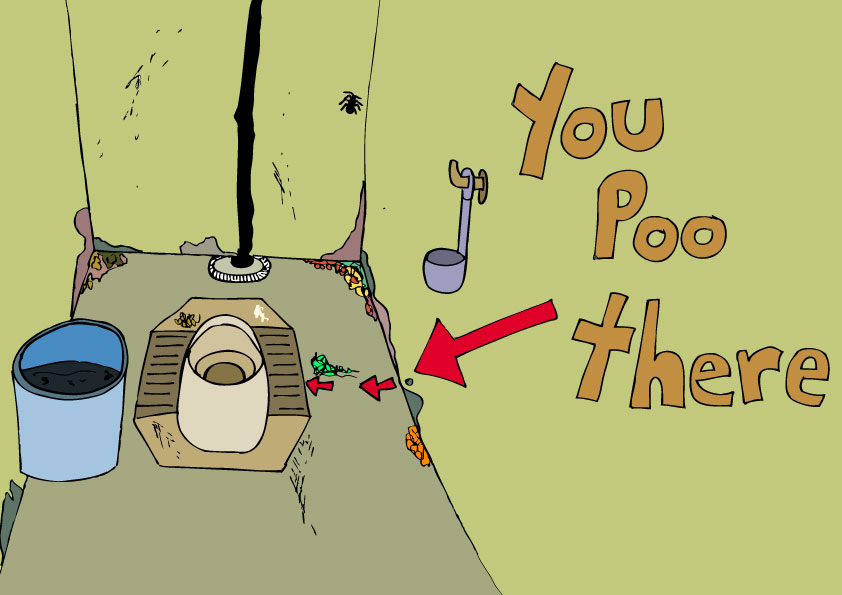 There are few resources.  Any games, activities or even bits of coloured paper that I need for a lesson are provided by me.  There is little recognition of how many fillers you need in a lesson where the majority of students can’t speak much English.

4. A common saying here is, “Oh sorry, I should have told you that yesterday/last week/last month.” I.e. before right now.  Which is usually too late.  Some examples:

Having spent hours preparing lessons to find out that there are no classes that particular day because the children are all away on a field trip or have exams.  This happens suprsingly often and I usually am only told about 20 minutes into the lesson when I’m wondering why no students have turned up.

Having spent weeks recording a child as absent to be told that they quit the school ages ago.

I think my favourite one is one that hasn’t happened yet but that I can predict is coming due to the terrible management of this school.  I’ll come to school one day to find it locked and a sign in Korean on the door.  When I finally track someone down it will be, “Oh sorry, we went out of business.  I should have told you yesterday.”

5. And somewhat related to above – when, for whatever reason, I don’t have a class I am still expected to just hang out at school.  Which wouldn’t be SO bad if it wasn’t for the fact that these no-show classes either seem to be (a) first class of the day; or (b) last thing on a Friday which coincides with my free period…making for spending from 6pm until 8pm sitting at school doing nothing, waiting to go home.  Once I asked to leave 10 minutes early as I had already been sitting there doing nothing for hours.  I was point blank told NO that was not possible.  That seems reasonable.

6.  Another favourite – the rules.  When you walk into the school there is a huge poster stating the supposed rules of the school taking up a whole wall.  I won’t even mention the peculiar English its written in. 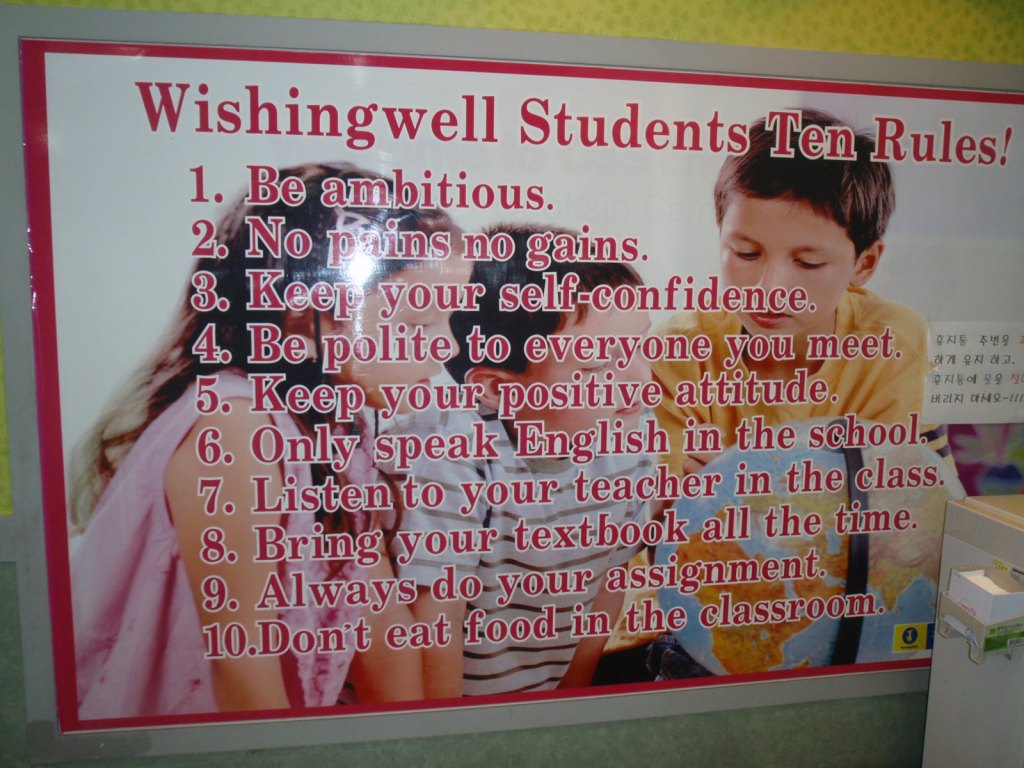 My absolute favourite of all of these is number 6 – Only speak English in the school.  The ONLY time these students speak English is when they are in the class with me.  The Korean teachers only ever talk to them in Korean.  This applies to before class, during class and after class.  So for the 5-7 hours a week these kids are at the school, they would speak an average of 1.5 hours English when they are required by me to do so.  Ridiculous.

As for numbers 7, 8, 9 and 10 – well, let’s just say that none of these rules are kept either.  But with no follow through and the Korean teachers not following them either, its a losing battle.

For any of you who have been teachers before you will know that yelling isn’t really the best way to deal with behaviour problems.  The amazing advice I have received from the manager is “to yell and scold more”, and to threaten to hit them.  And then to hit them if needed.   Neat.

Oh and one more thing….they should also probably include another rule to be ignored: No Sleeping in Class. 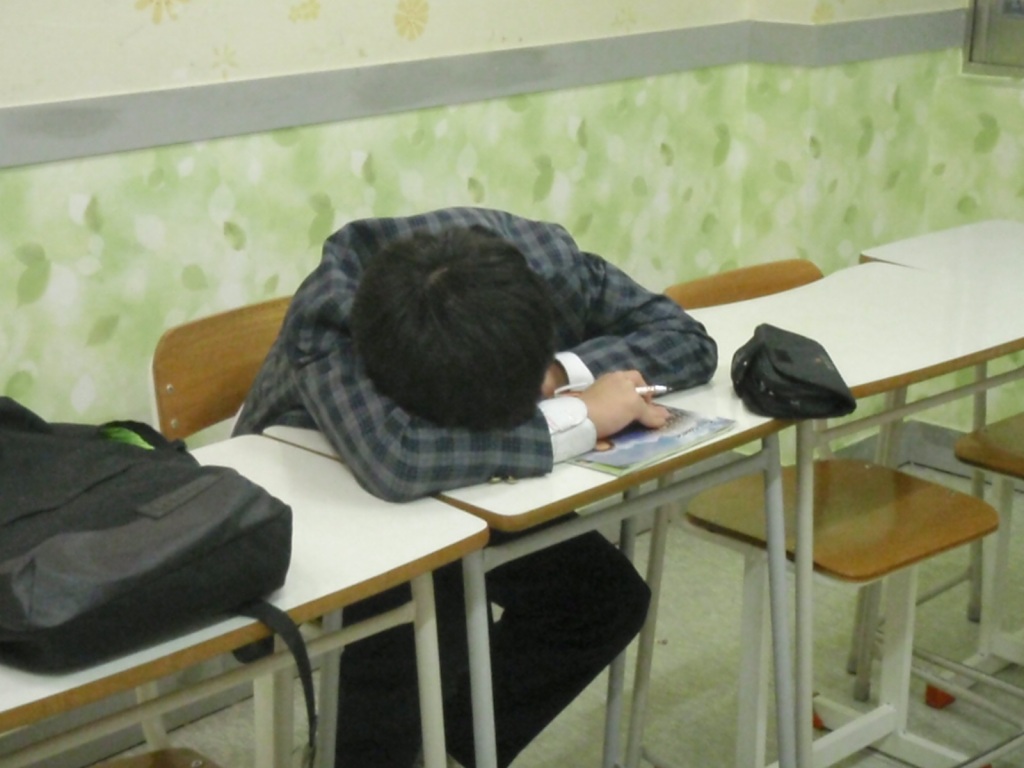 What’s the moral of today’s story, dear readers?  Never consult a Korean engineer about your internet.

Oh, and probably don’t enroll your children at my hagwon either.