The Hottest Rickshaw Driver in the Sub-Continent? Oh, and Jaipur.

At the heart of Rajasthan lies the state capital of Jaipur.  Now, our city experiences so far in India hadn’t been our favourite ones…the crush of people, intense smells, heavy traffic and, most of all, the eye searing pollution, had made us rather appreciate the smaller places.  Jaipur had a lot of potential though; enough temples, forts and palaces to sink a battleship!  What else lurked beneath the crush of motorbikes and auto-rickshaws, we pondered… 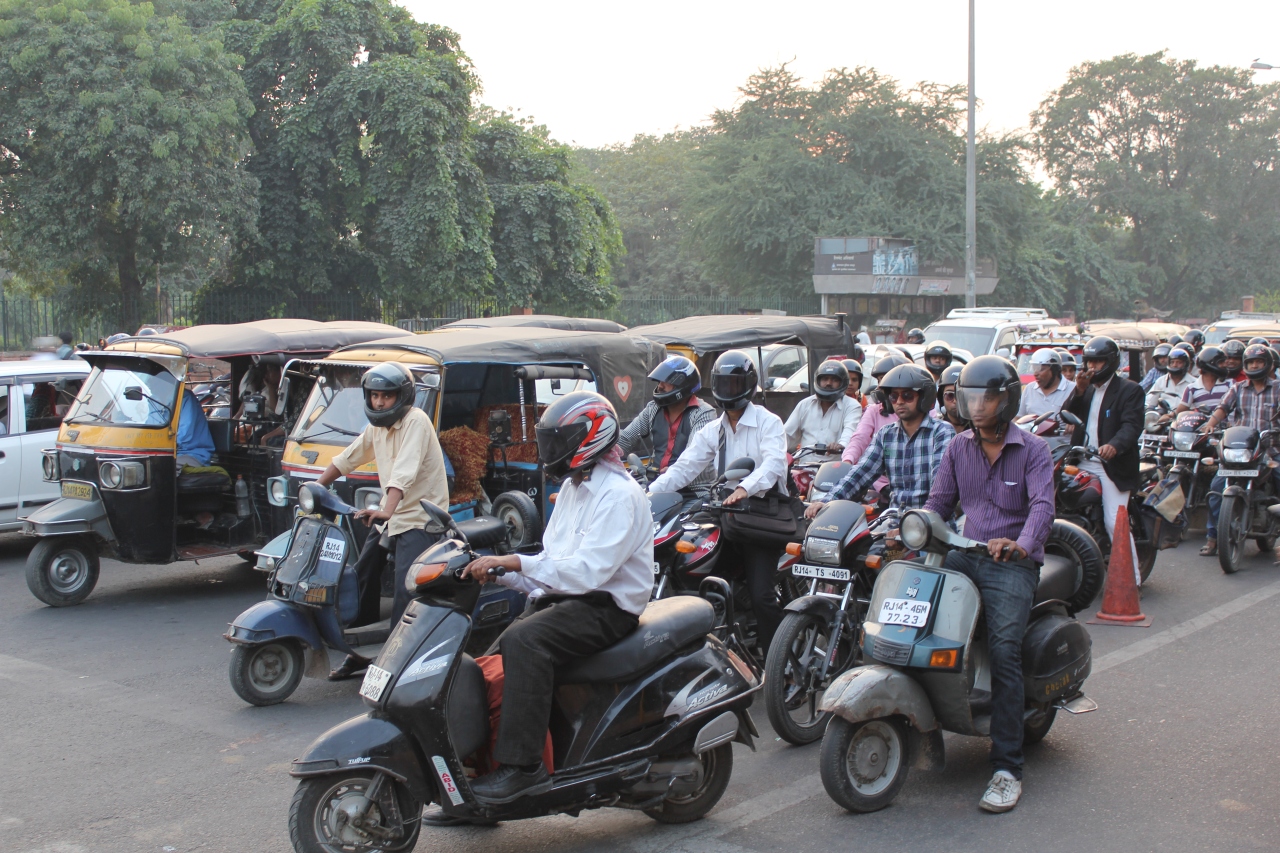 Taking off through the streets, we discovered quickly why Jaipur is also known as the ‘Pink City’… if ‘pink’ actually meant ‘kinda salmony orange’.  Is it just us, or is this not really pink?  It wouldn’t pass the Hello Kitty test, that’s for sure. 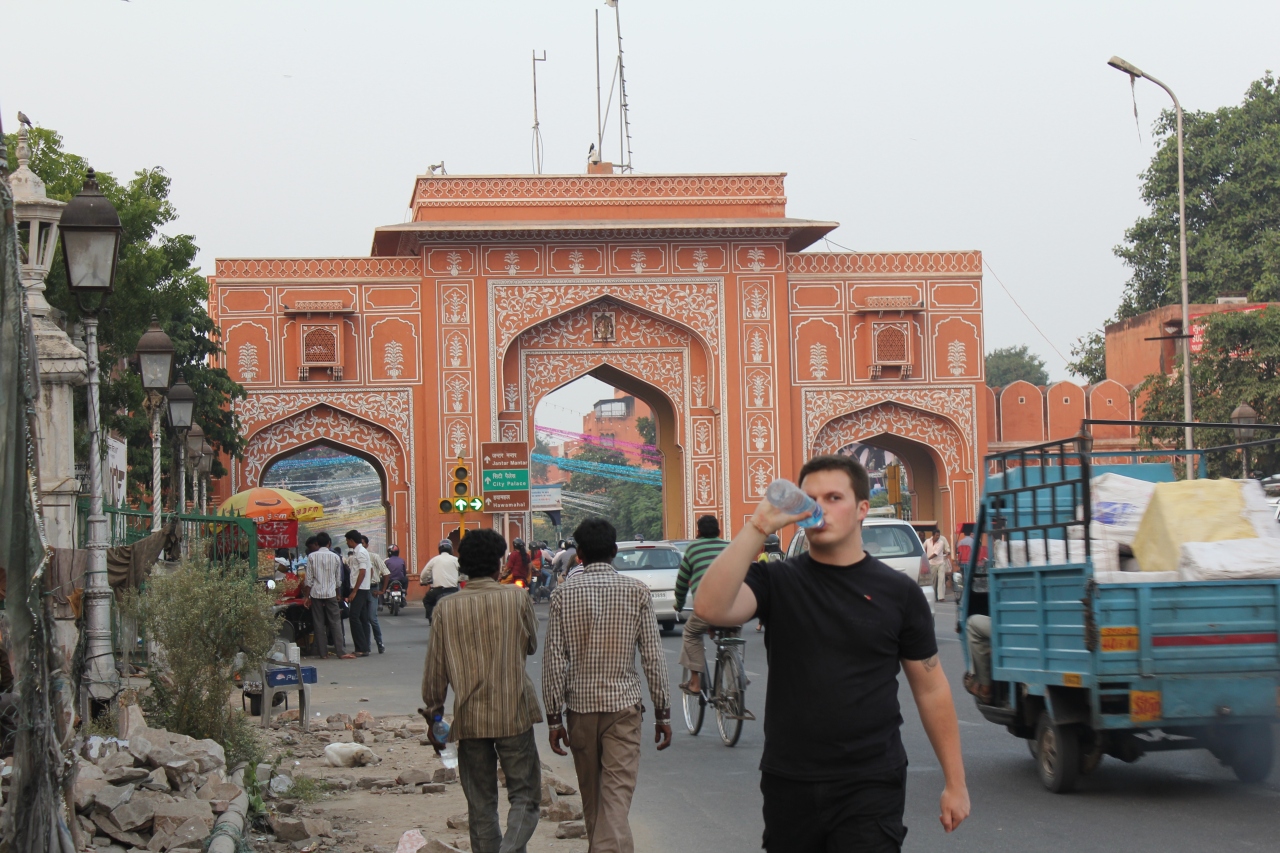 So what did we do there?  Well ingesting delicious items is always somewhere near the top of the list for us in a new place and the papaya juice at this streetside stand was incredible!  He’s been cranking the business for decades, not surprisingly, when are see how darn tasty these drinks are.  It was the perfect pre-movie treat. 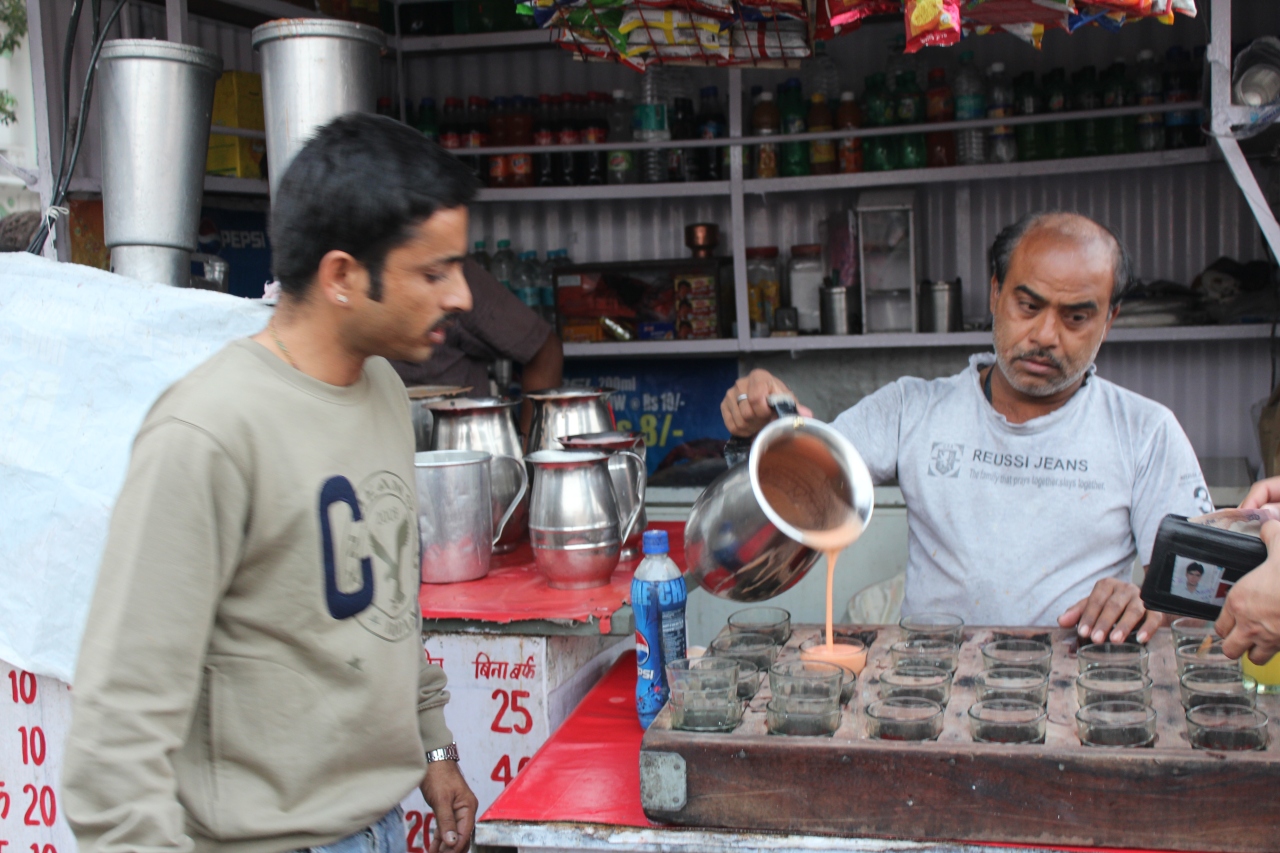 Pre-movie, we hear you exclaim!  The word on the street was that for the ultimate touristy Jaipur experience it was off to the famous Raj Mandir for a Bollywood feature film. 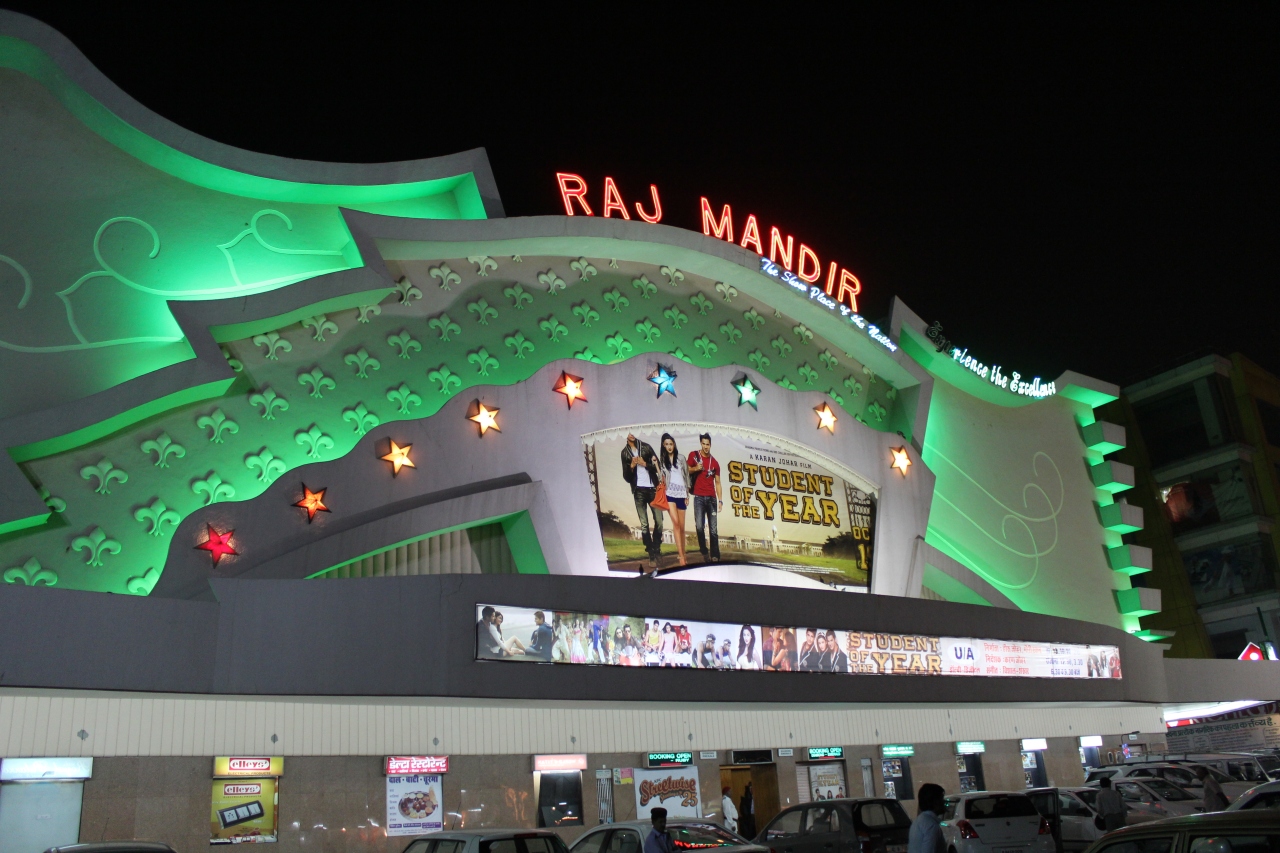 The cinema itself is huge, seating 1,000 keen movie-goers at once.  We were there at prime time so, no surprise, the OTT foyer was packed. 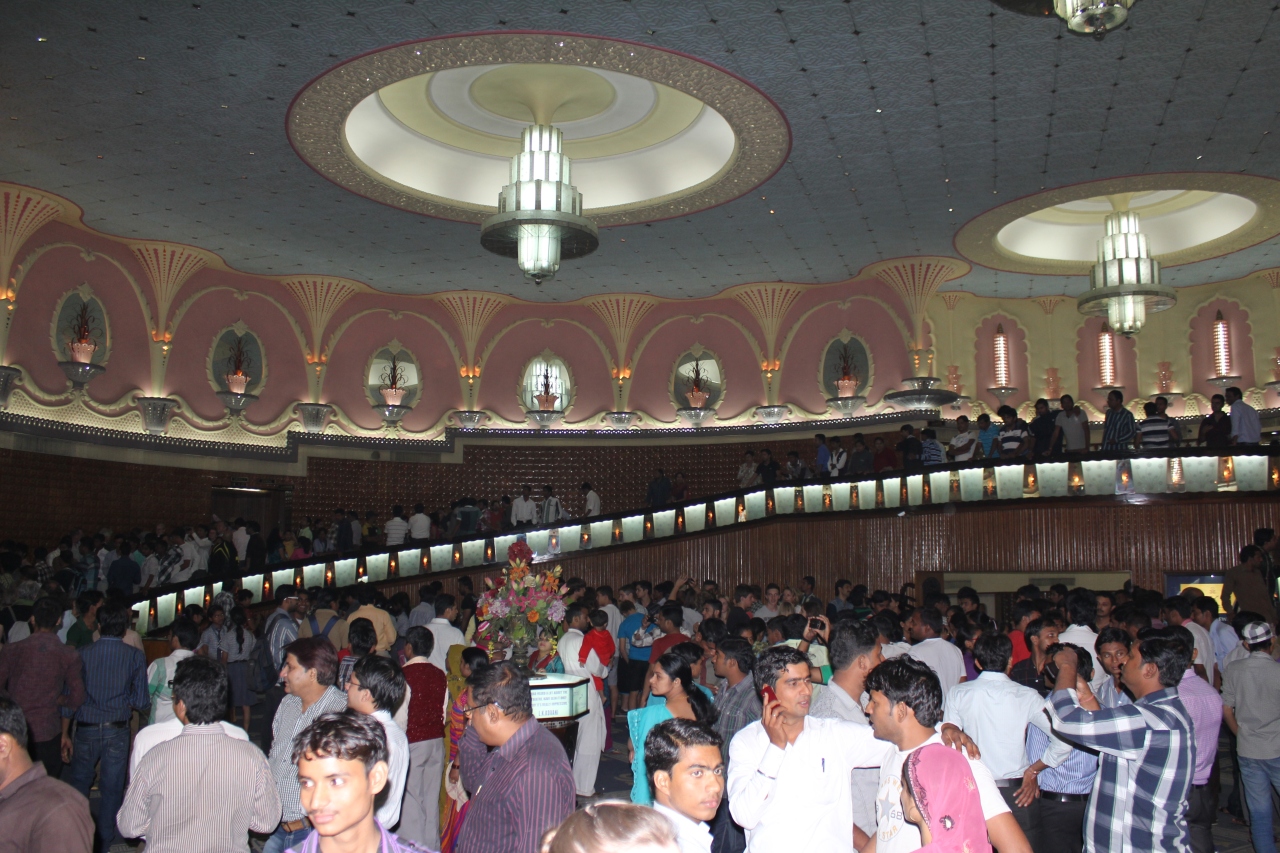 Seats taken in front of the large screen, a proper old school rouched curtain rose on the latest Bollywood sensation, Student of the Year.  No, it wasn’t in English and no, we aren’t fluent in Hindi after a whole two weeks in India.  Also no, there weren’t subtitles.  But it really didn’t matter.  The plot was pretty straightforward (coming of age rom-com),  the scenery (both the backdrop and the actors) was stunning and the audience filled in the rest of the gaps with heartfelt ‘boos’, gushing ‘awwws’ and raucous cheers at all the appropriate junctures of the movie.  If you’re one of those people that demands silence while attending a movie, then India, it seems, is not the place for you but we thought it was amazing providing a totally different movie atmosphere than we’ve ever experienced anywhere else.

We were even provided with a half time break – it was like being back in the 80s at a movie in NZ!  Unlike the 80s in NZ, however, here you could pop out and refresh yourself with a large Coke and some samosa!

Stocked up and excited for the remaining half of the show we settled back into our sliding chairs.  Who needs English when you have a thousand Indians cheering and a couple of samosa?! Bolly Bolly Bolly!

The next morning it seemed like we should pull up our socks and get stuck back into the temple-palace-fort circuit.  Jaipur is the second biggest tourist destination in India for the good reason that it has wonderful examples of all three of our beloved Indian regulars.  First stop, though, was to a little coffee shop tucked just off one of the main roads. 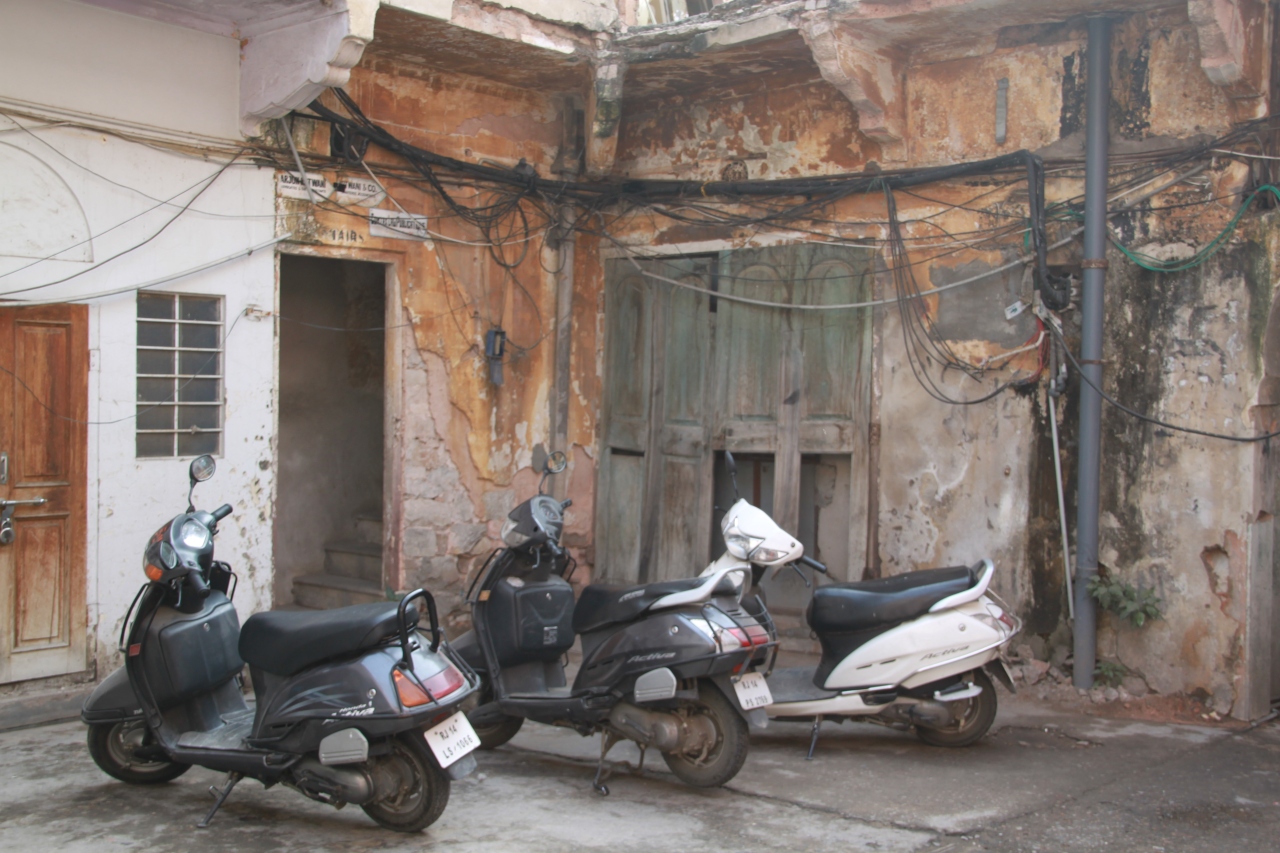 The Indian Coffee House is a restaurant chain across India, run by a series of worker co-operative societies.  While its good to always take Lonely Planet recommendations with a grain of salt, this place had a wonderful local atmosphere and served super cheap South Indian brekkies alongside omelettes and toast combos.  The service is patchy but hey, that’s India and by now we were starting to expect ridiculously long waits for food as well as frequent omissions, unavailabilities etc…and we’re on holiday so who cares?!

Post-breakfast, it was off to explore the Monkey Temple.  Actually, its not called that at all but we got distracted and paid more attention to the tribe of monkeys than the spiritual stuff.  On a hill overlooking Jaipur, it was a pretty amazing setting with loads to capture our interest. 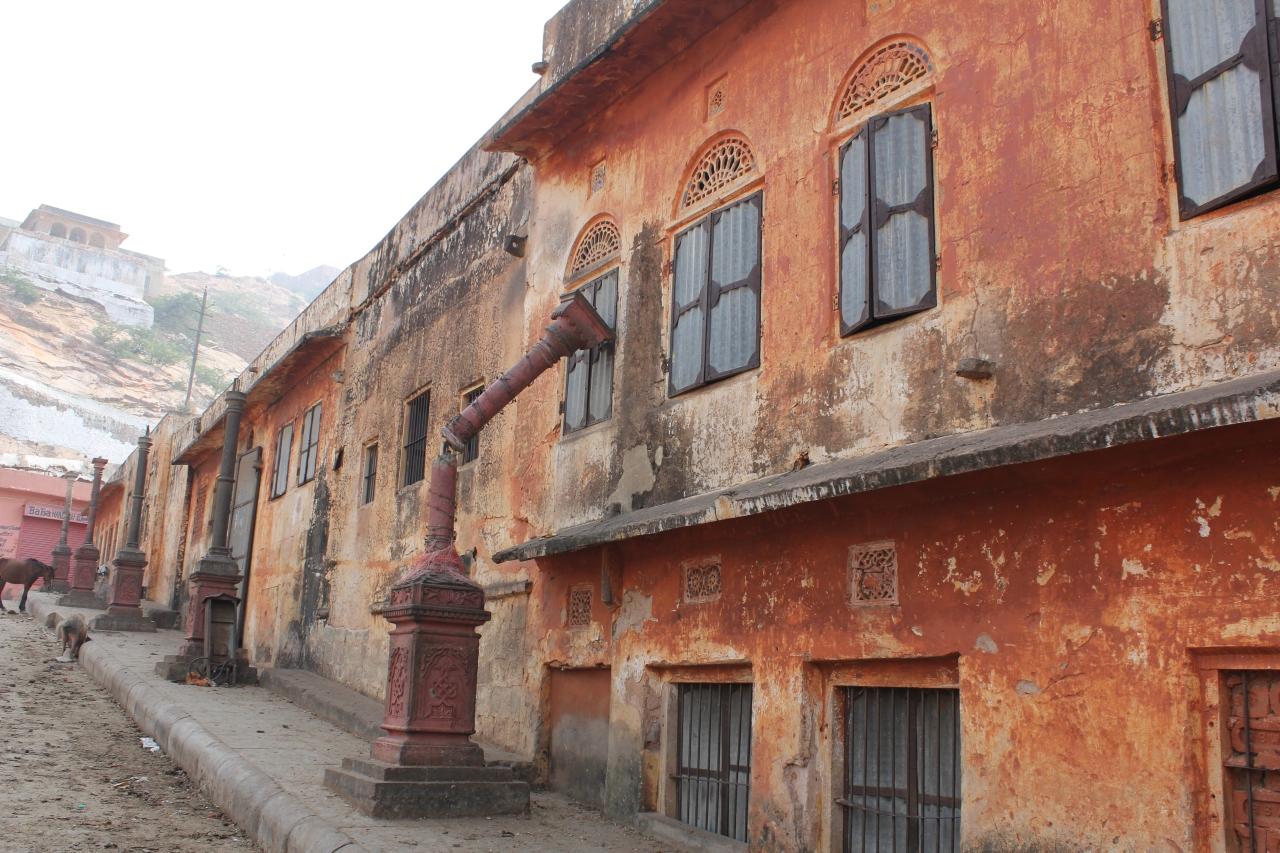 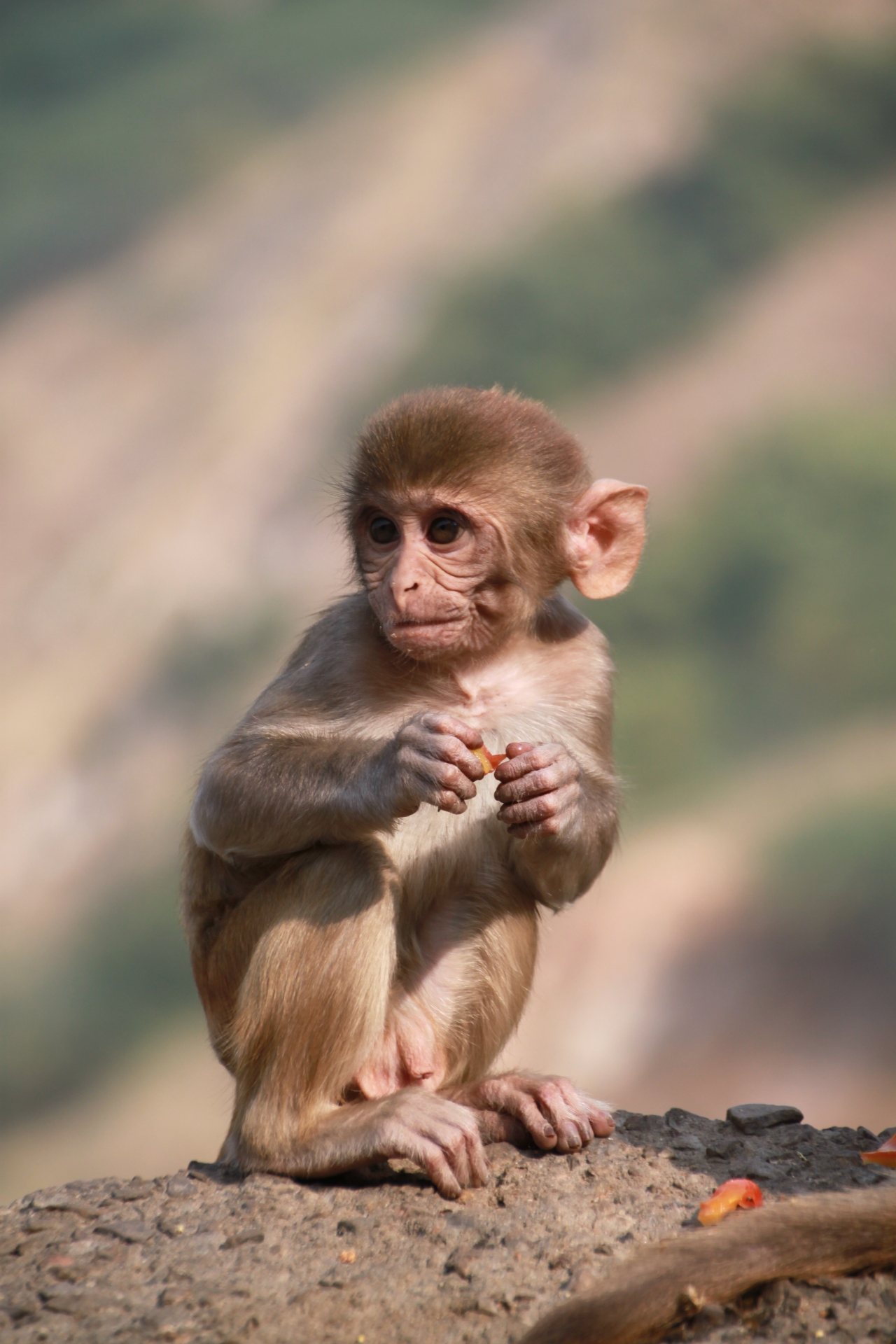 While Dan was off playing with the monkeys, H-J and Ushma had started to let their inner animals out by getting very excited over a very good looking auto-rickshaw diver. Quote unquote: “He can drive me any day!” Dirty ho bags.

They figured trying to photograph him in the rear view mirror would be the subtle approach. 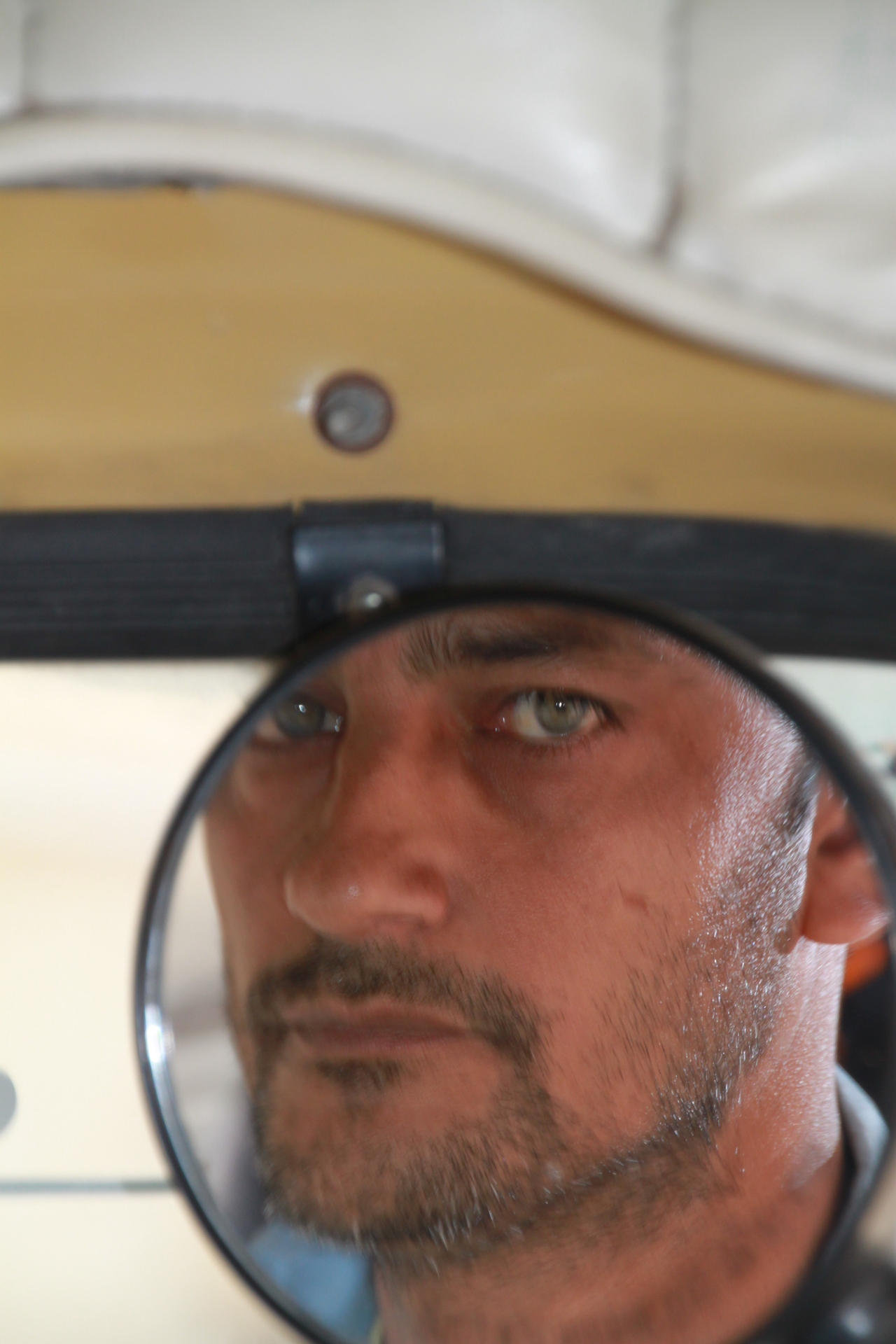 But no, H-J didn’t run off with the driver.

Now for those of you are entirely over the diary-ness of this blog (and then we did this, and then we did that, and then we…SNORE) we sincerely apologise and will be much better little cariboud next post.  Promise.  Too make up for it, we will finish with a real highlight of Jaipur and no, it isn’t a temple of a fort (though we saw plenty of those)…remember Chirag’s face when he was greeted by the Next Level Chocolate Cake?

Well, stumbling upon a rather funky looking ice cream parlour Chirag and Dan took it upon themselves to create some monster sized sundaes.  Can you say “a sundae as big as my head, please?”  The only thing bigger was the boys’ smiles. 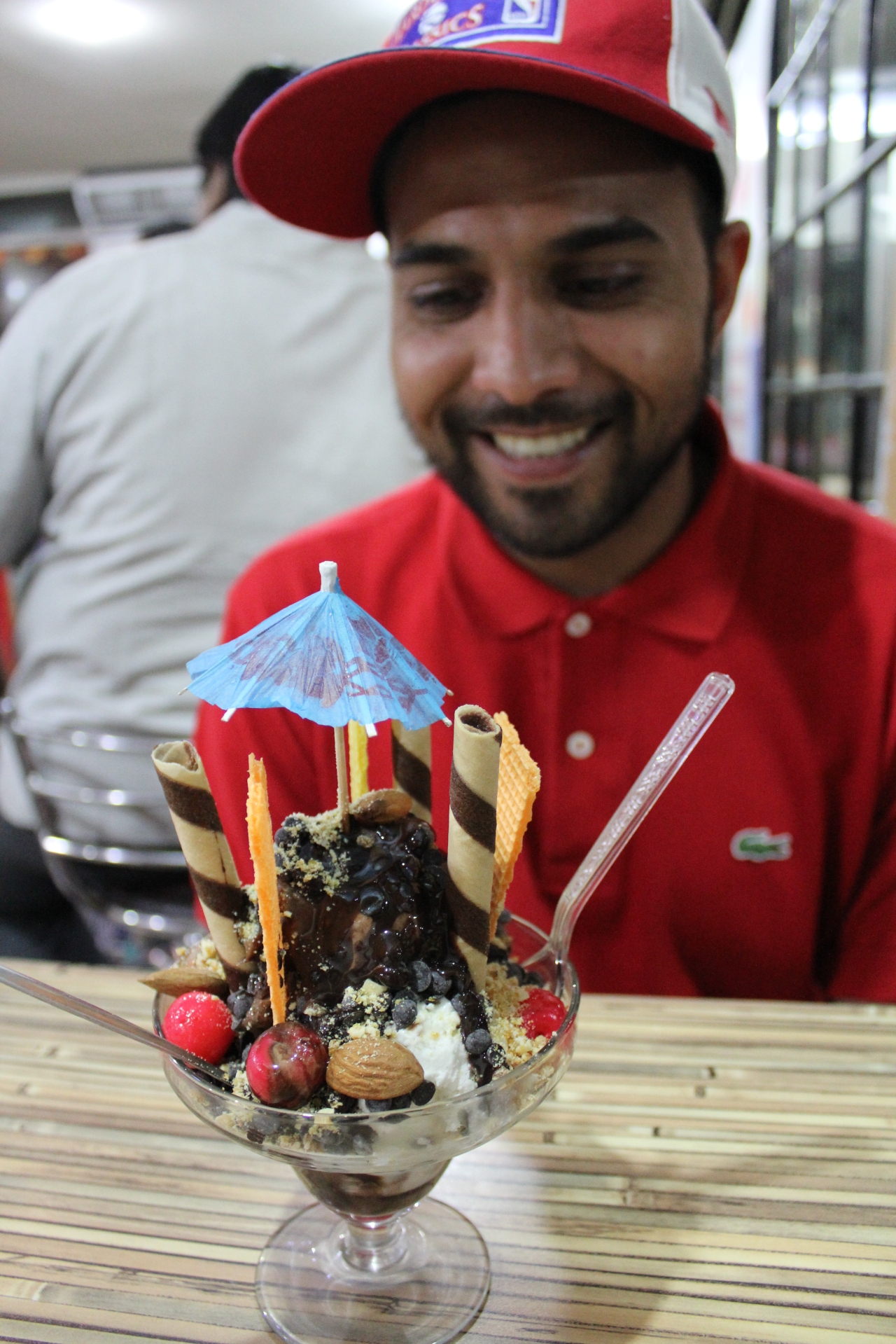 Love at first sight thawed, slowly at first, then more rapidly as they dug their way further into the ice cream trenches.  Along with, it appears, with their determination to conquer this dairy feast.  Their faces were a sight.

Movies, monkeys and gluttony – turns out Jaipur wasn’t so bad after all!