How to be the Perfect Indian Spouse

While staying in Udaipur, one of the local activities that comes highly recommended is taking part in a cooking class.  Now being utter food geeks and always ready for any excuse to touch/consume tasty morsels, we signed up pretty much on arrival in this fair town. 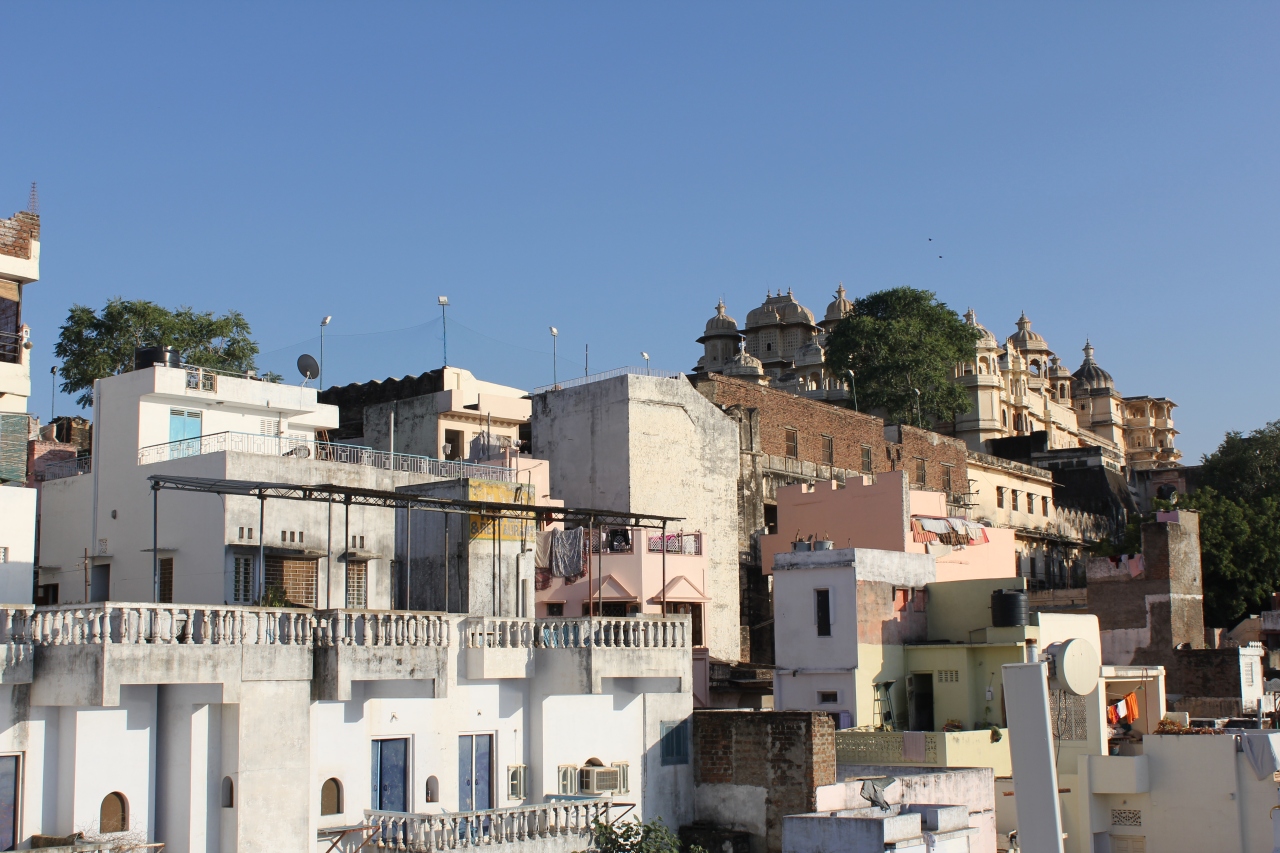 The instructor of the course was a man named Shakti who, it turned out later, of course not only ran a cooking school but also a retail shop where we could buy each and every one of the tools he demonstrated/displayed during the course of the two hours. 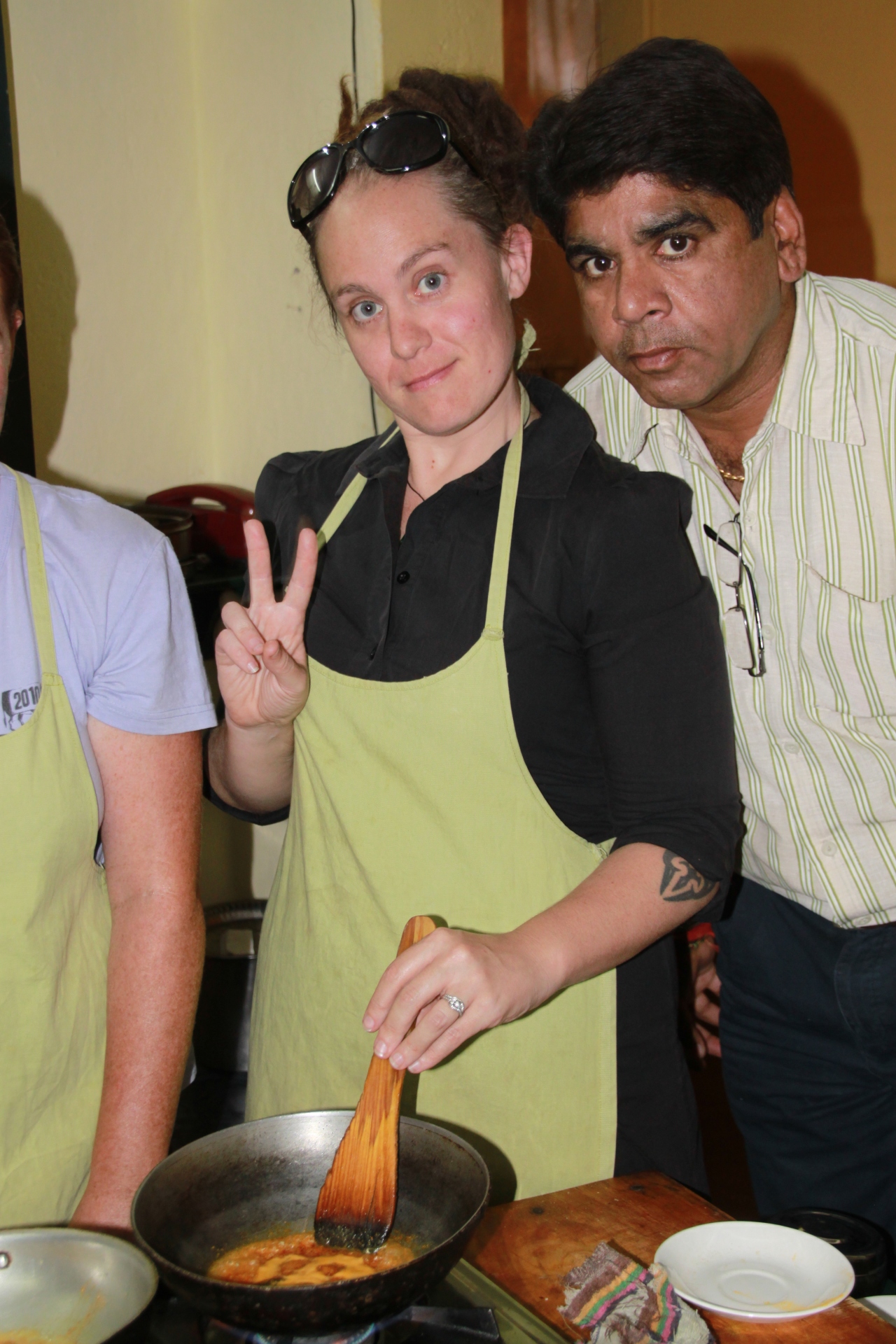 “Free shipping, free shipping”, he chirped constantly, in an accent that switched between Apu from the Simpsons and The Italian Man who went to Malta.  Funnily enough, Dan, not really warming to Shakti the Accent Chameleon, took notes on his recipe sheet throughout the course of the class, which we shall share for your added amusement. 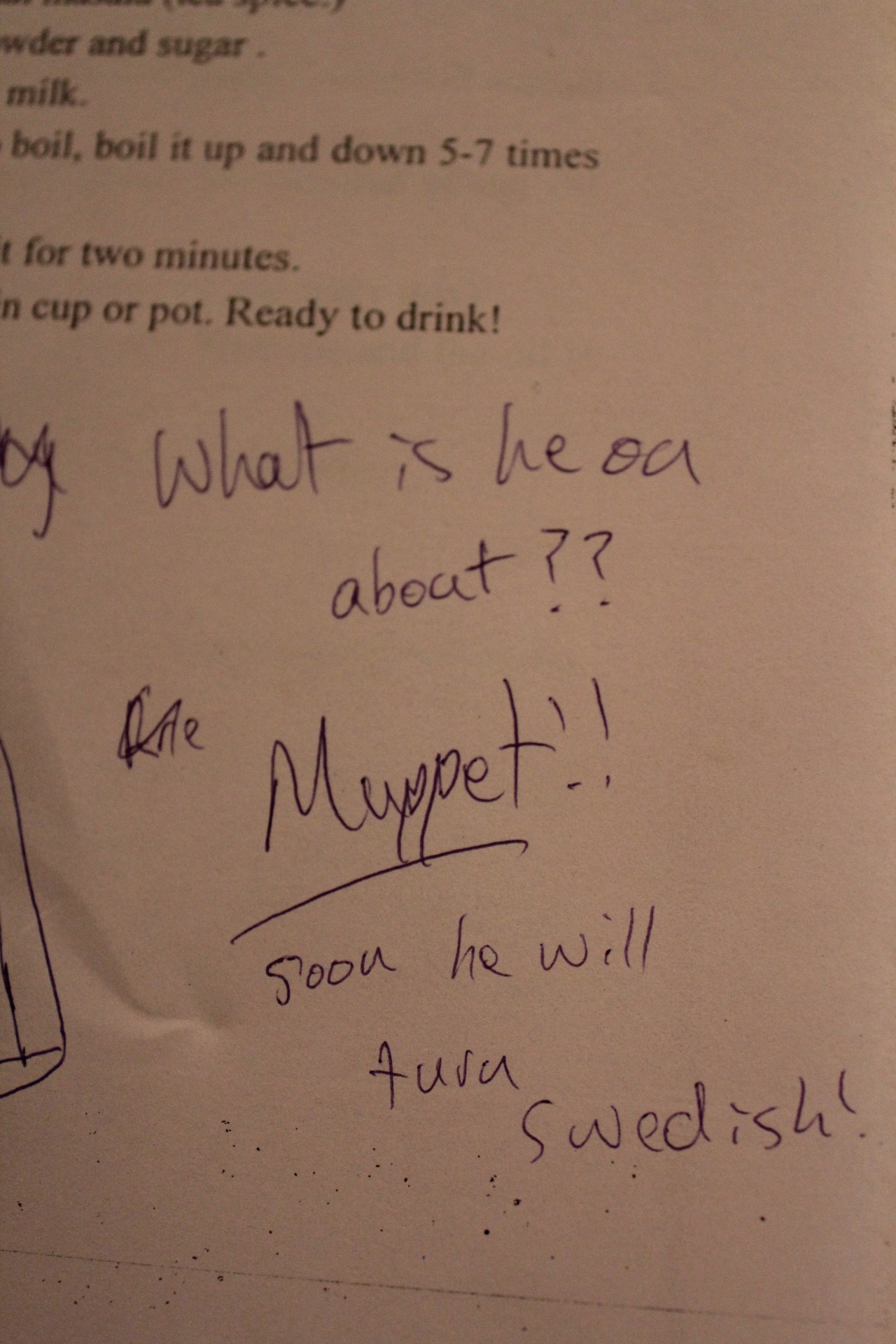 The first thing we were instructed in was how to make masala chai.  We had supped many a cup since our arrival in India, some great, some crap and most just average.  This one was okay but perhaps we’d go a little heavier on the masala when making it again, otherwise it just tastes a bit like overly milky, sweet tea.  Which is pretty much what tea in a lot of Asia tastes like, but anyhoo…

If you’re feeling inspired, here’s the recipe, together with a portrait of Shakti, by Dan: 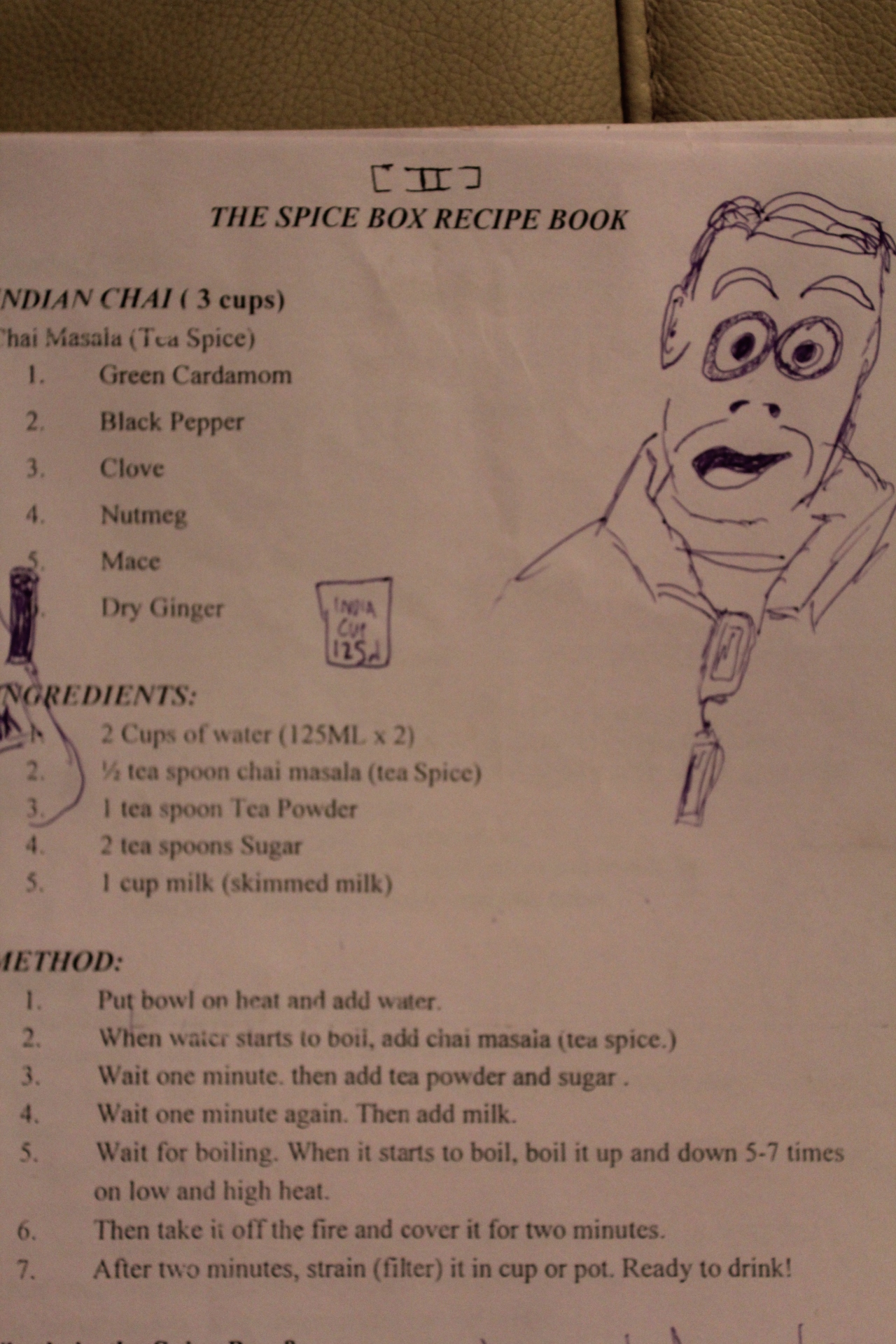 While touting the useful spice holder (only $19.99!!! nah, we made that up), Shakti introduced us to the types spices used in Indian cooking and to the basics of the different types of curries.  Taking turns up at the front, we then set to creating a bunch of dishes – the first of which was Khadai Paneer, a tasty and fresh blend of cheese and vegetables.

Next up was Malai Kofta, a creamy potato-dumpling kinda dish.  Not too many action shots here other than one of the sauce being made. 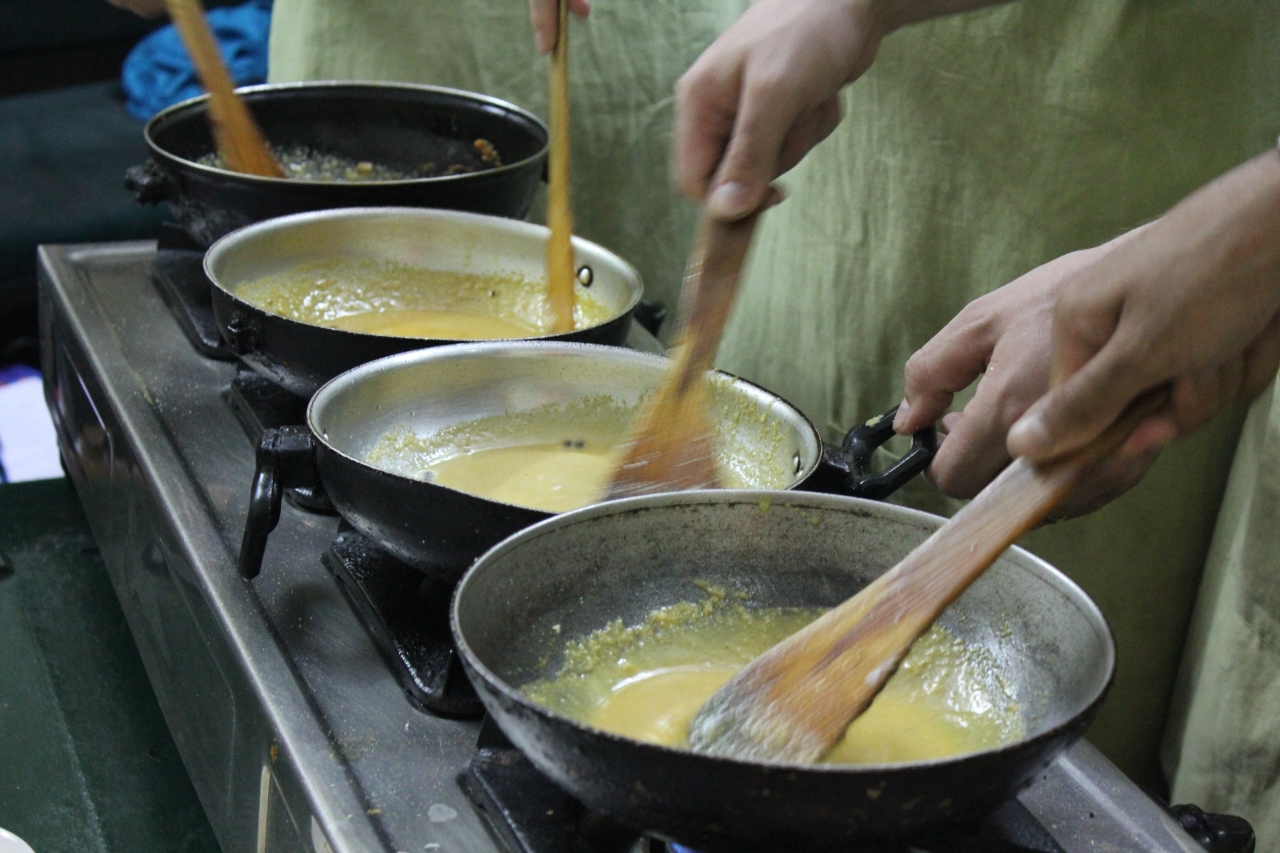 Lucky for us though, Dan provided a helpful illustration on his notes of a translation of Malai Kofta… 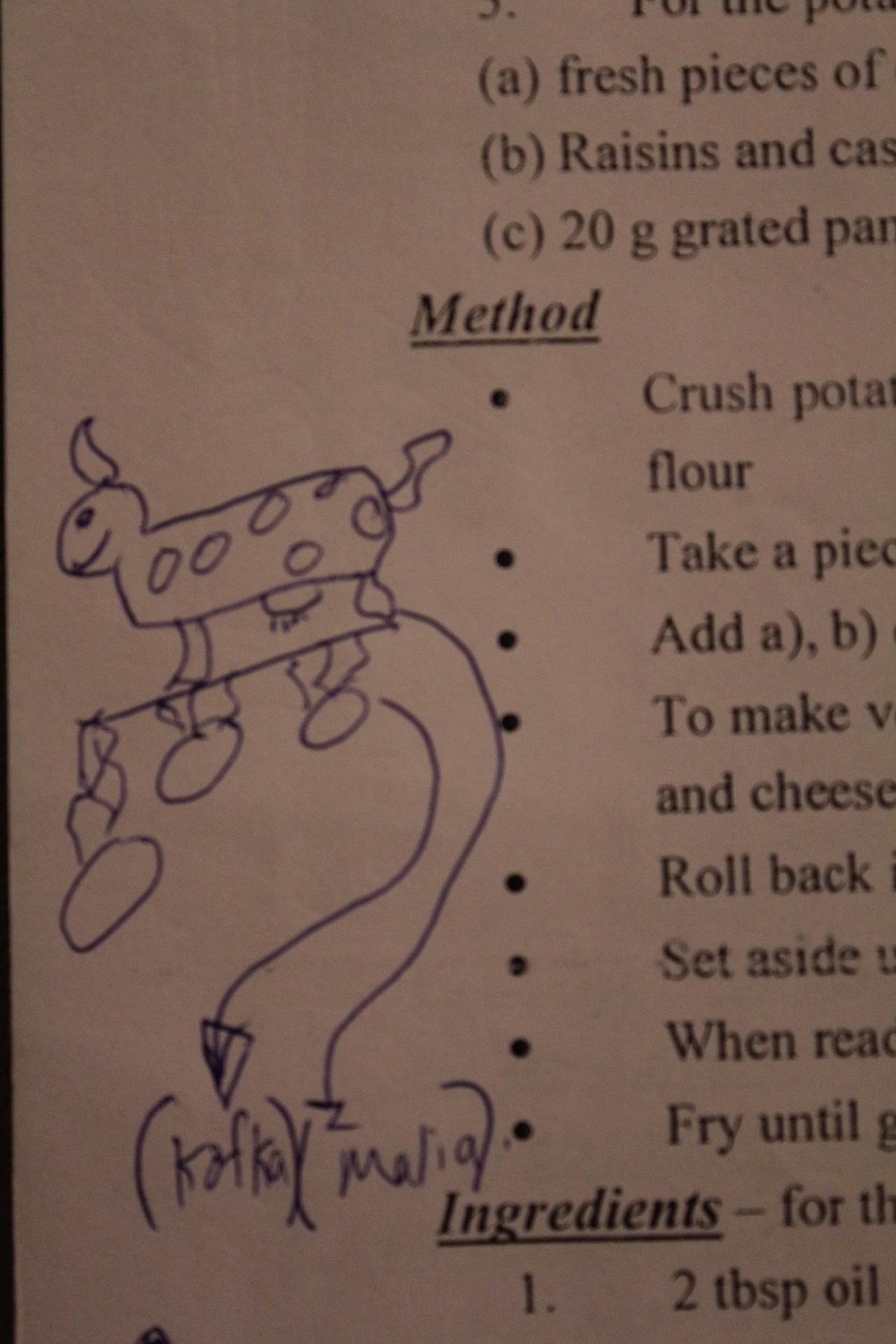 …together with a direct quote from Shakti himself, providing one of the most helpful instructions of the whole lesson.  You can’t make this shit up! 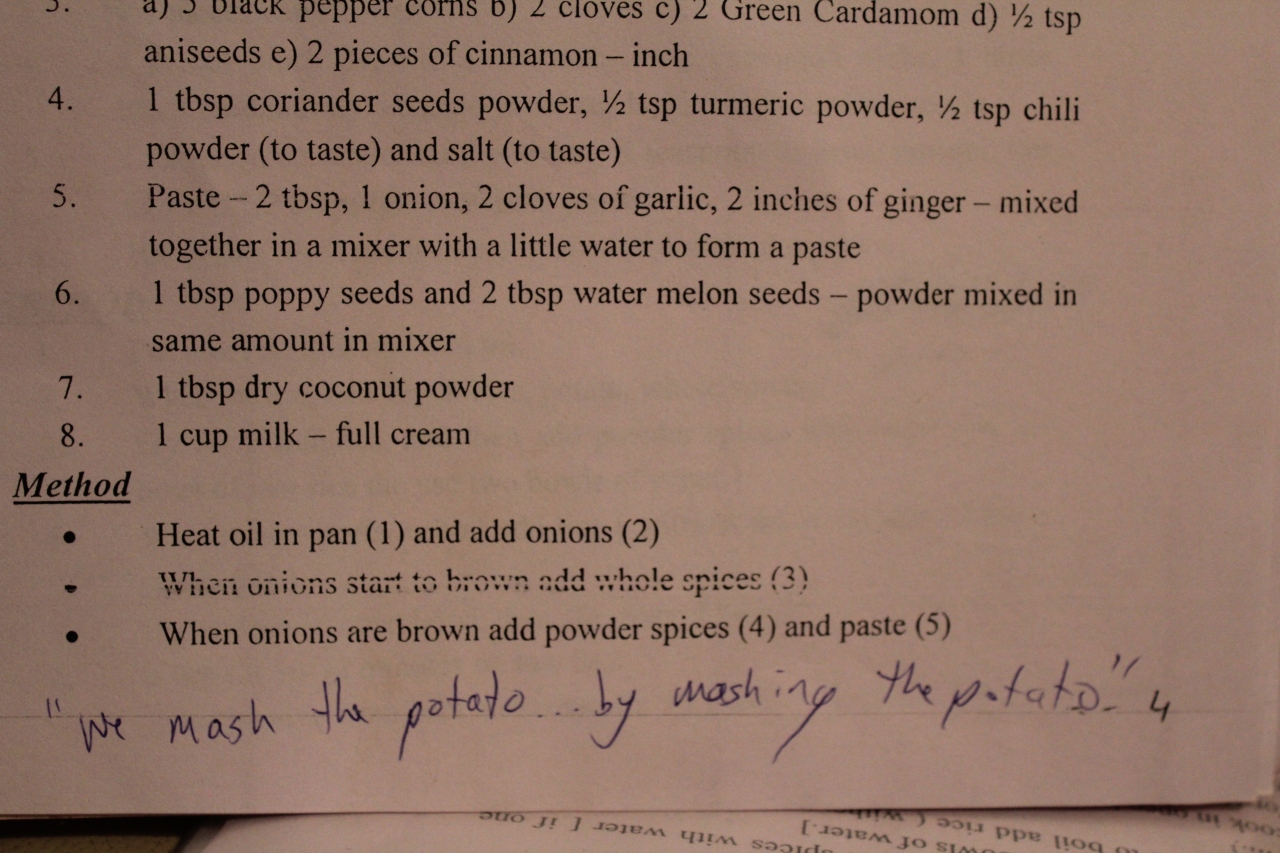 Yes folks, you read that right…”we mash the potato…by mashing the potato.”

Our attention now was, however, turned to more serious matters.  That of Chapati Making.  We use capital letters here very deliberately because it seems that the art of Chapati Making is more than mere cookery – it apparently can dictate whether someone is of good marriage material!

The marriage industry is alive and well in India with thousands of advertisements lining the pages of the newspapers every day.  They vary according to age of groom/bride, height requirements, industry preferences… 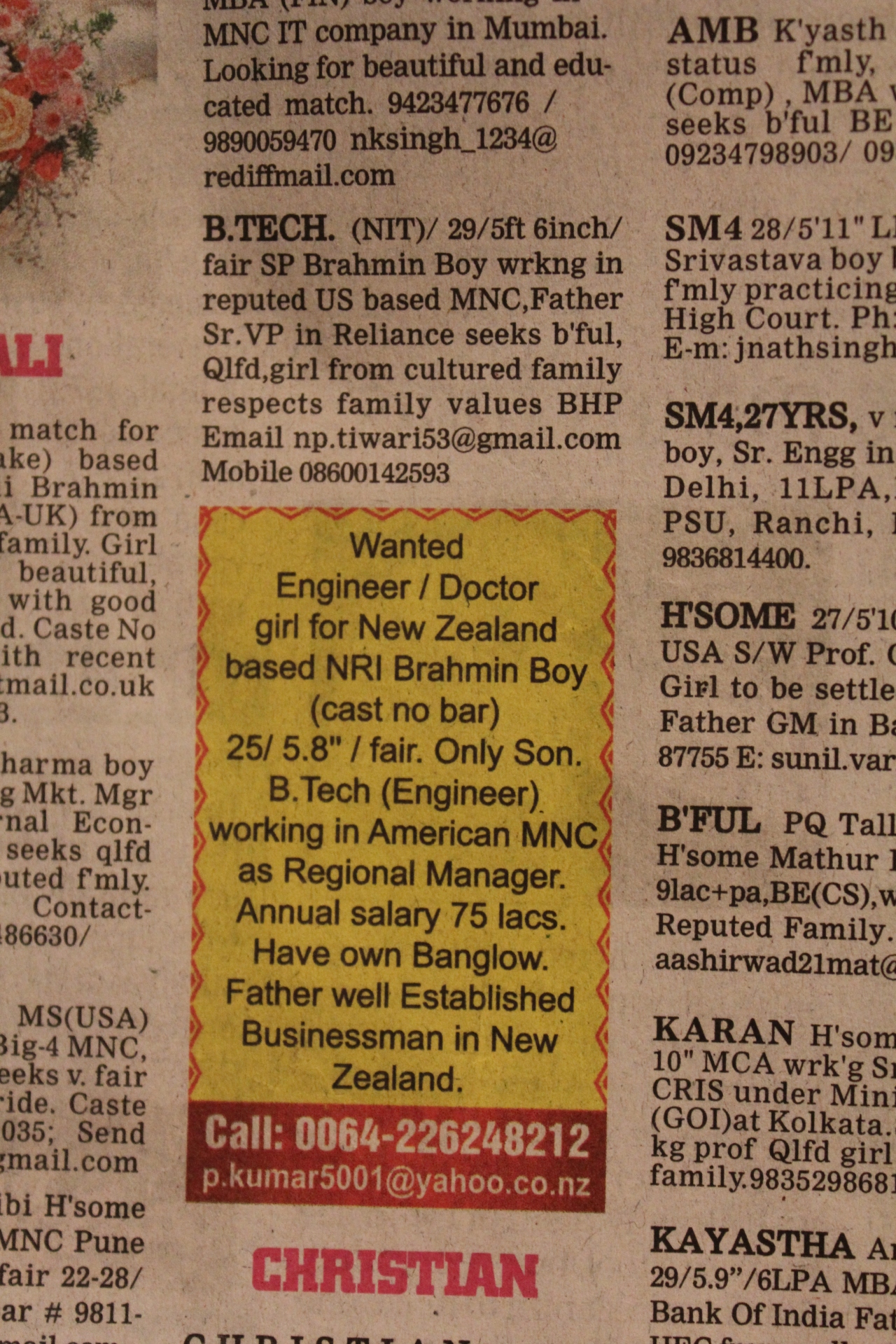 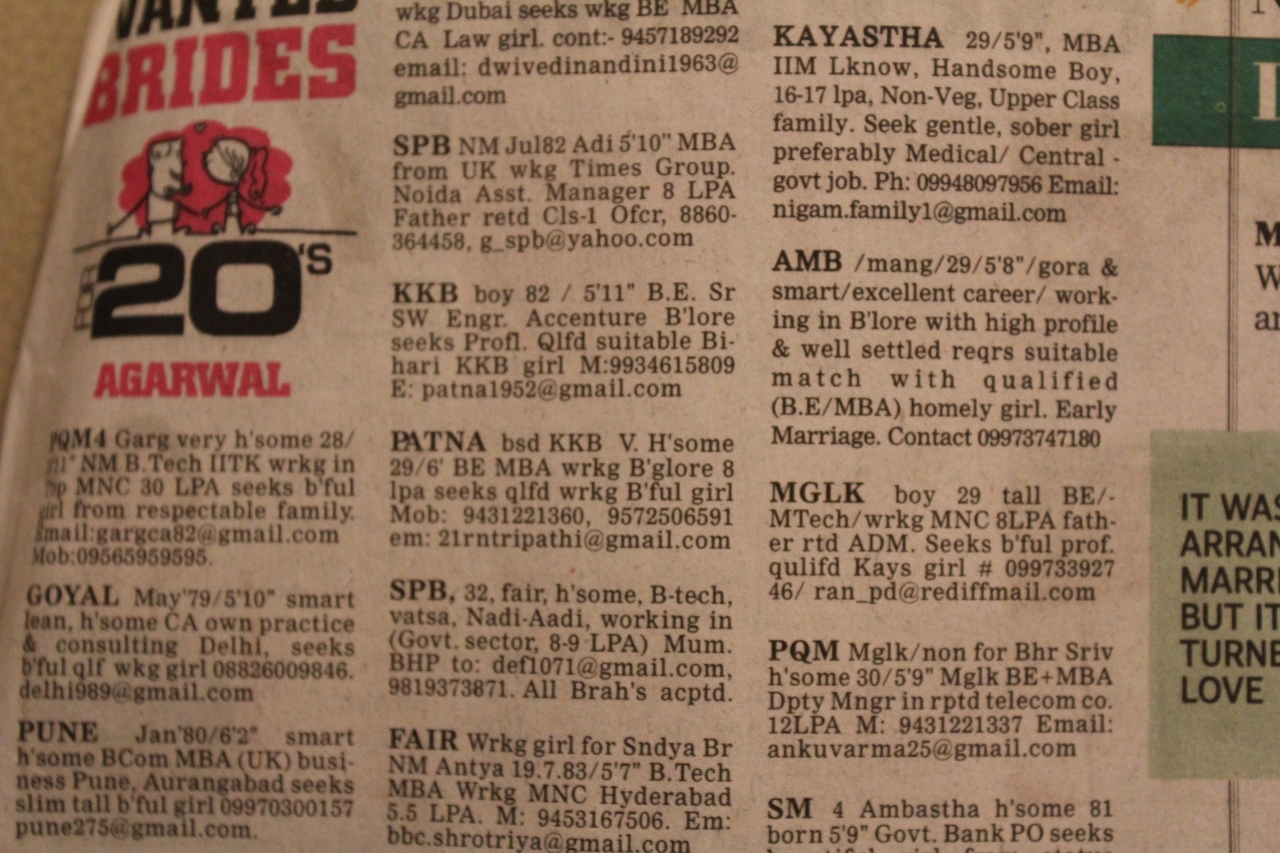 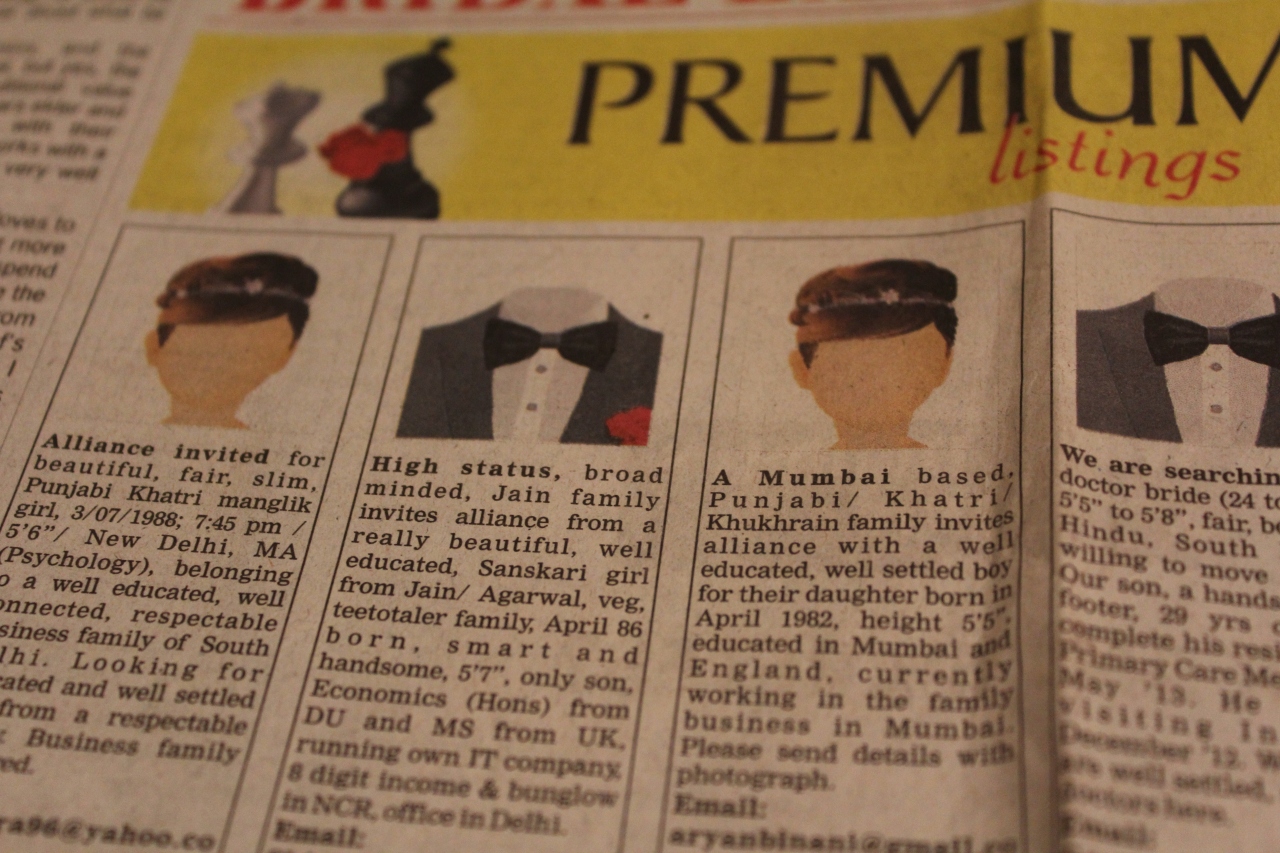 But how does one prove whether one is REALLY marriage material?  Is it the fancy degrees?  Or the fairest of natures?  Nope..the answer lies in the ability to make Perfectly Round Chapati.  No frilly edges.  No asymmetrical blobs.  No pressure!  Sheesh. 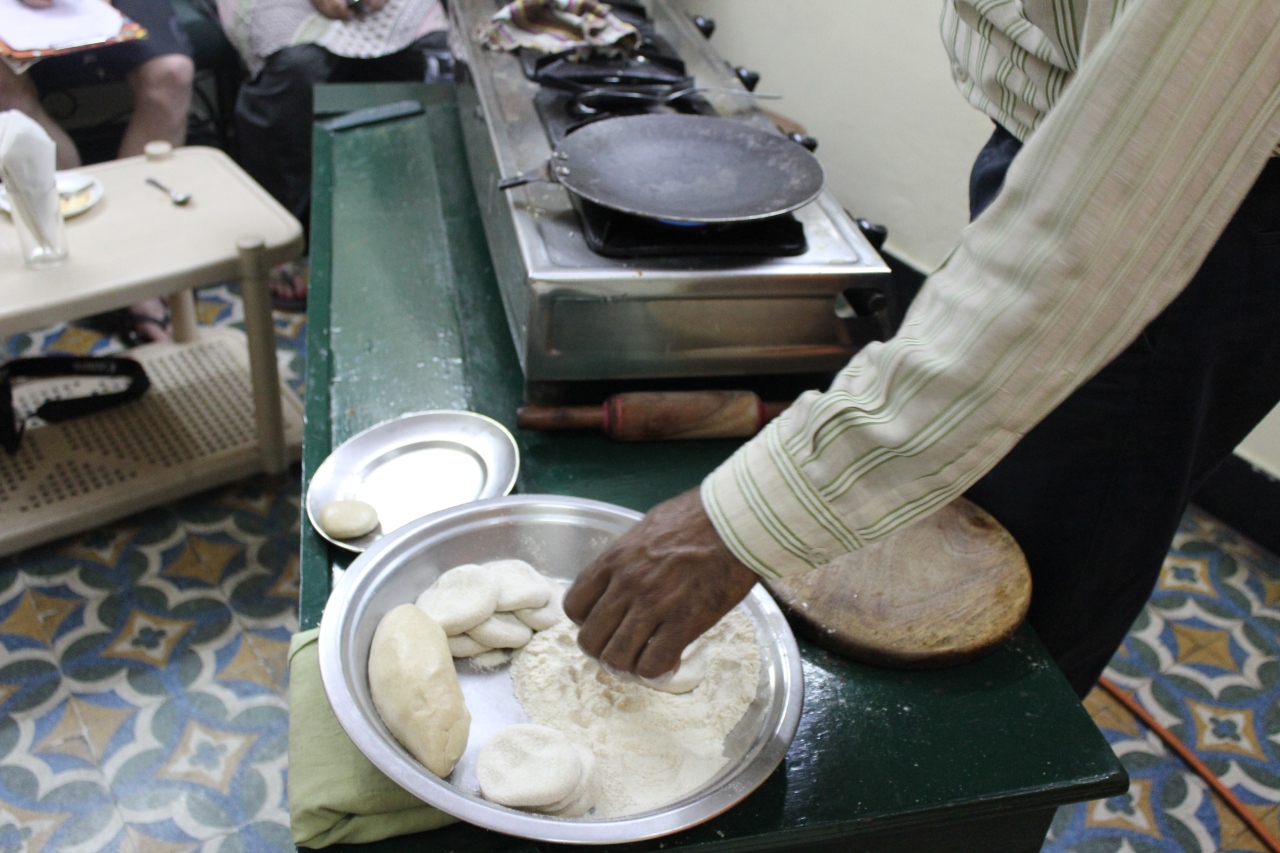 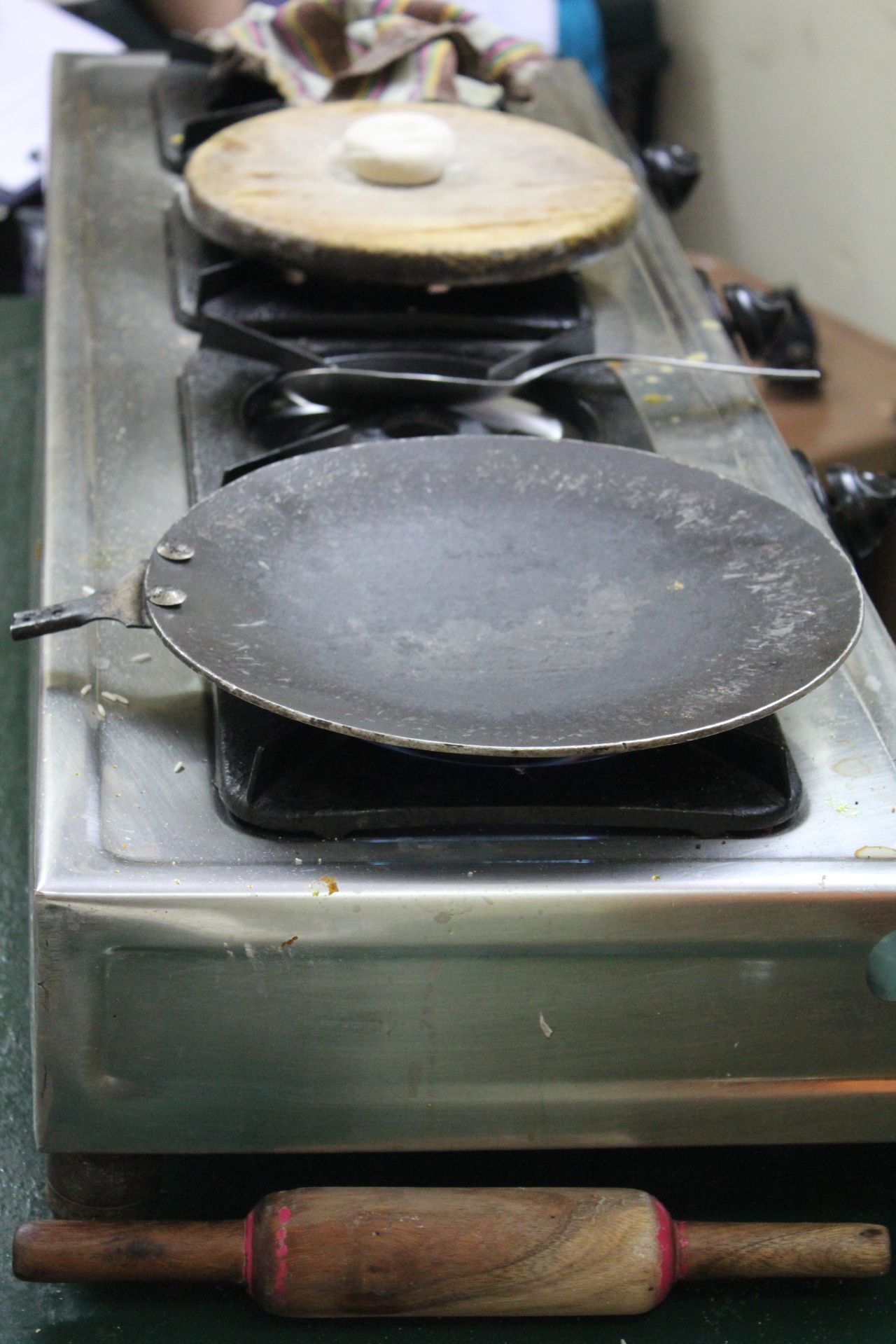 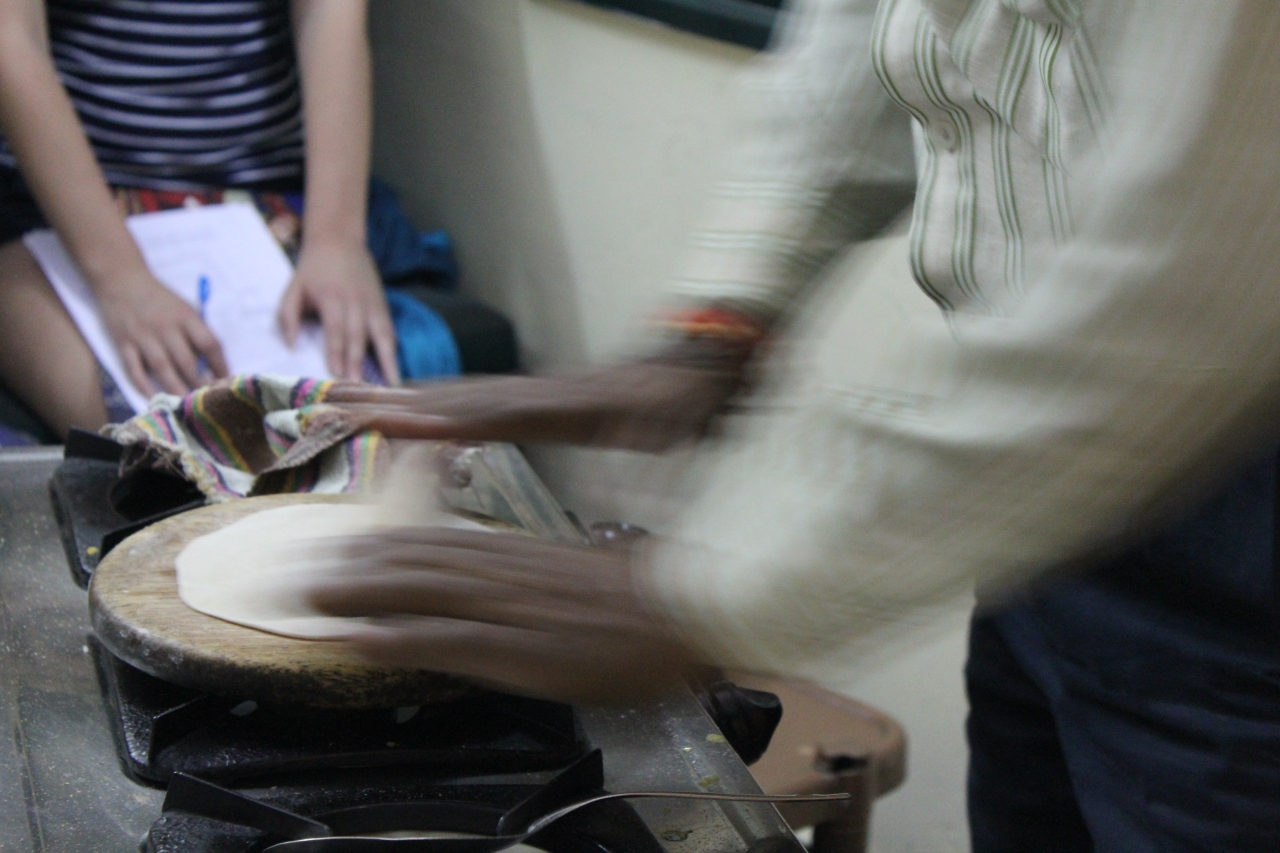 Looks easy right?!  Just roll into a nice, round circle. 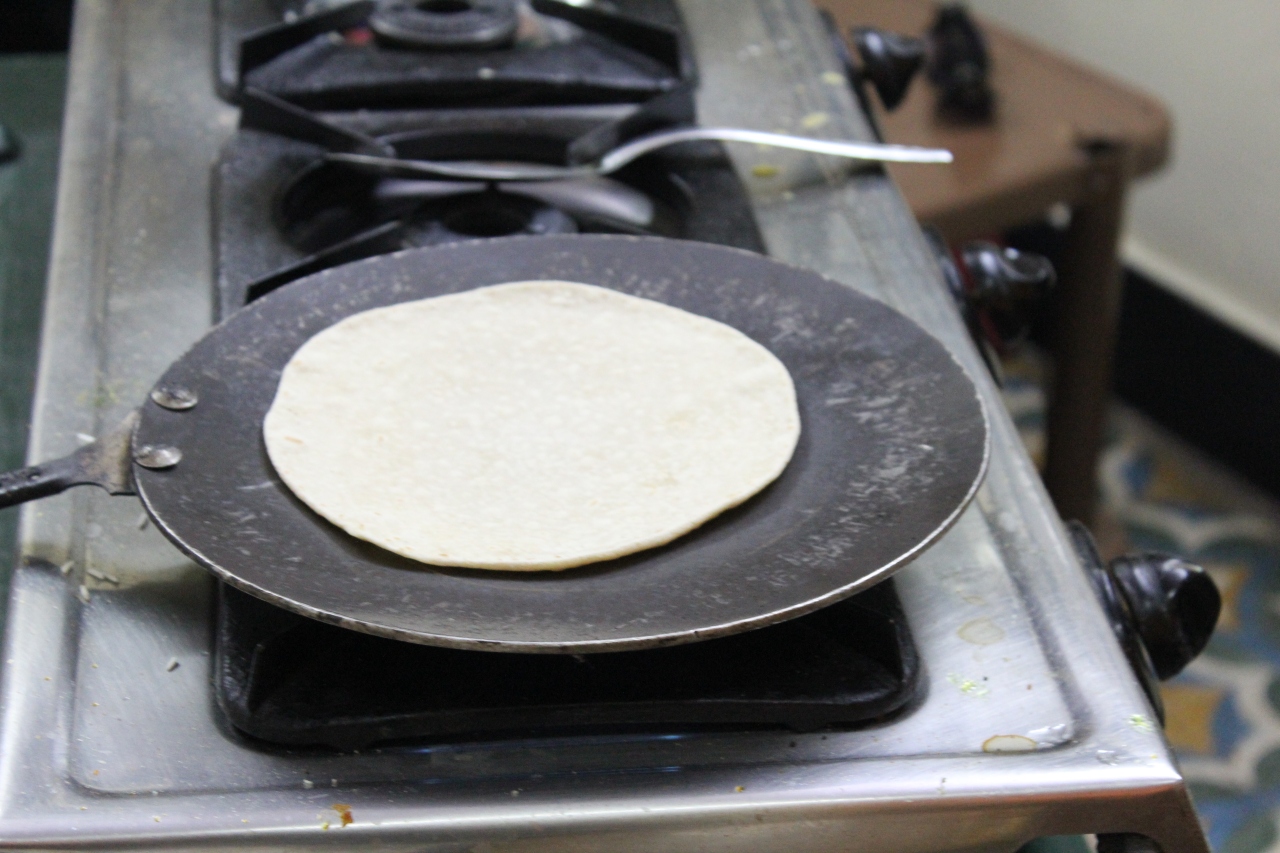 Then cook until bubbles form before flipping to ensure perfectly distributed cooking. 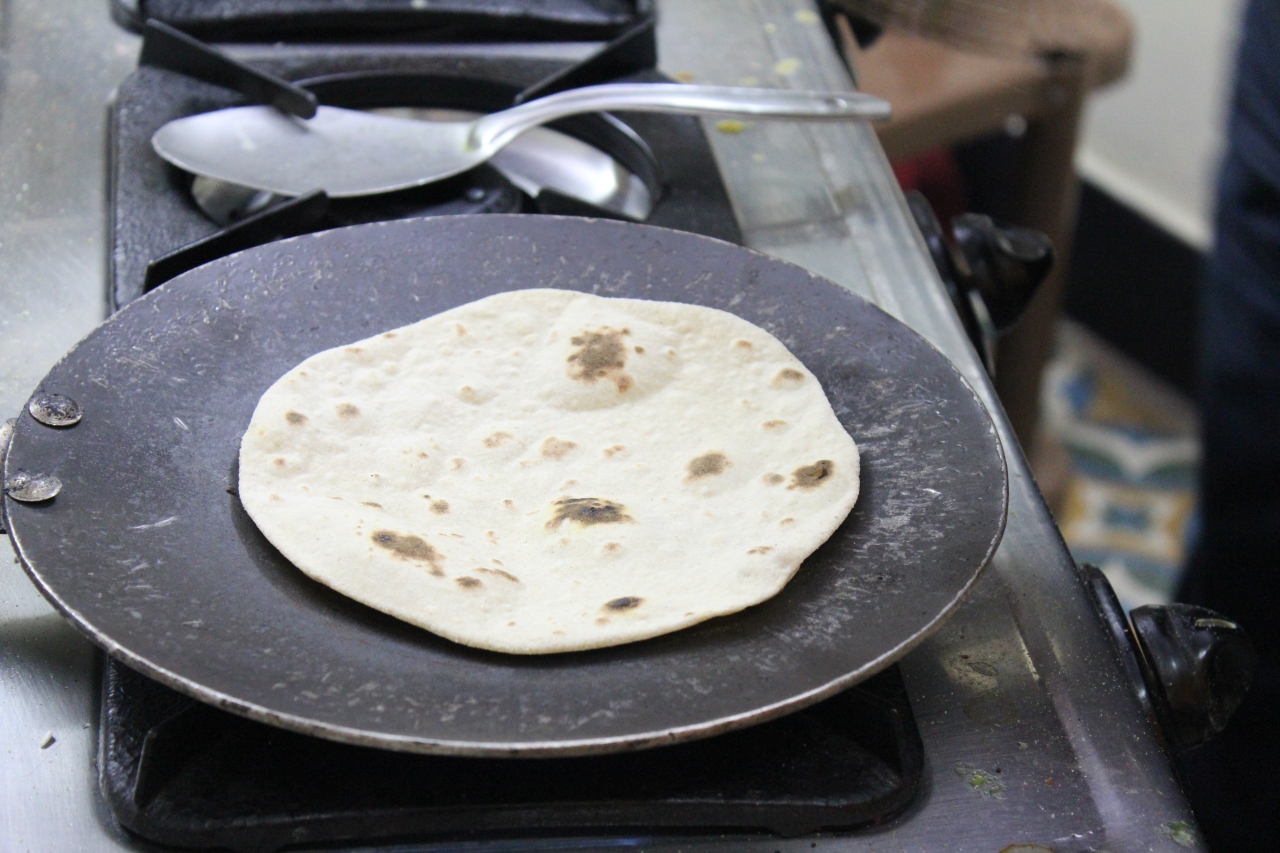 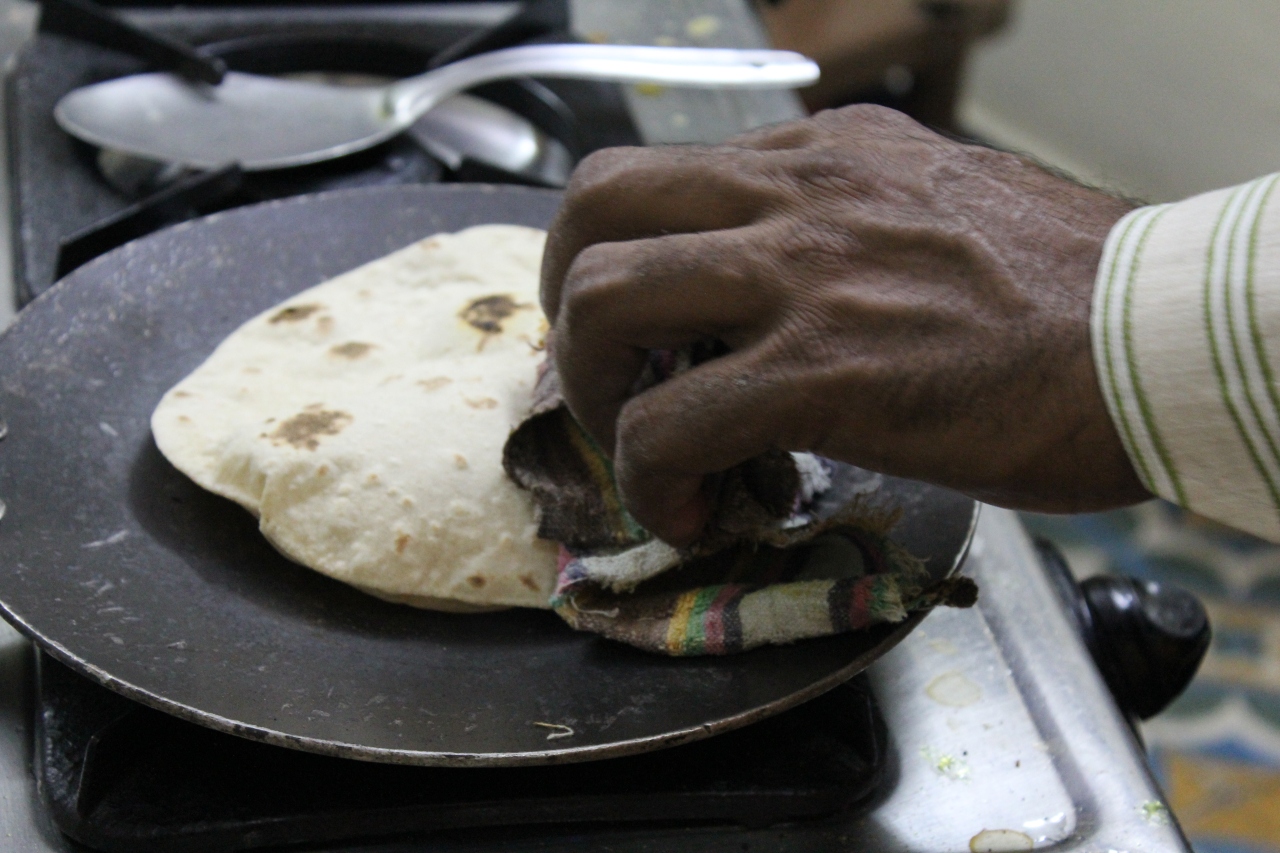 H-J stepped up to the plate.  Already being married took some of the pressure off…which was just as well really as her blob was instantly pretty uneven.  Not surprisingly really.

Her cooking face left a little to be desired.  This is not the face of Chapati Confidence, by any stretch of the imagination. 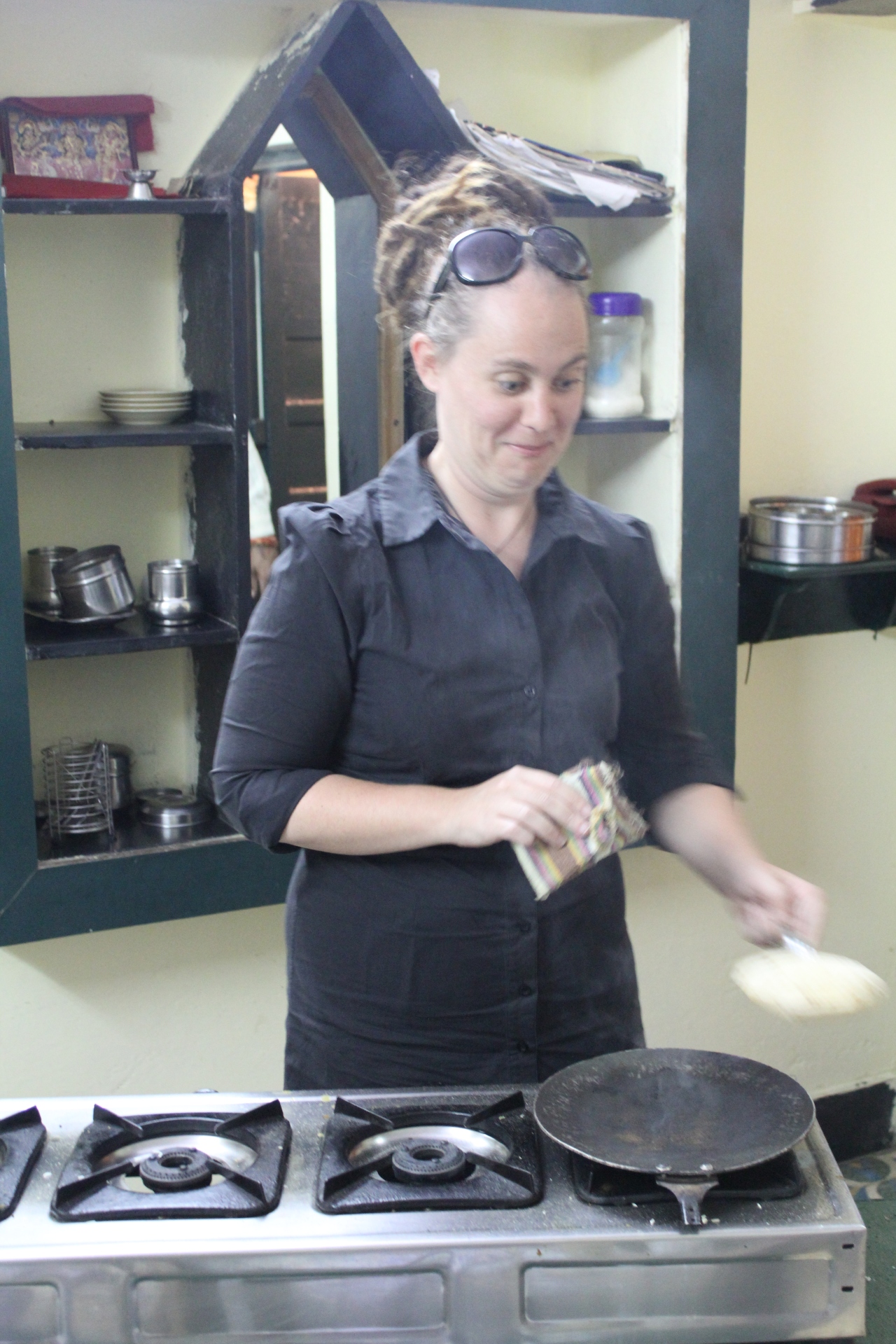 Dan and Chirag, stunned by the awesomeness of it all, took on the gleam of terrified looking Masterchef contestants. 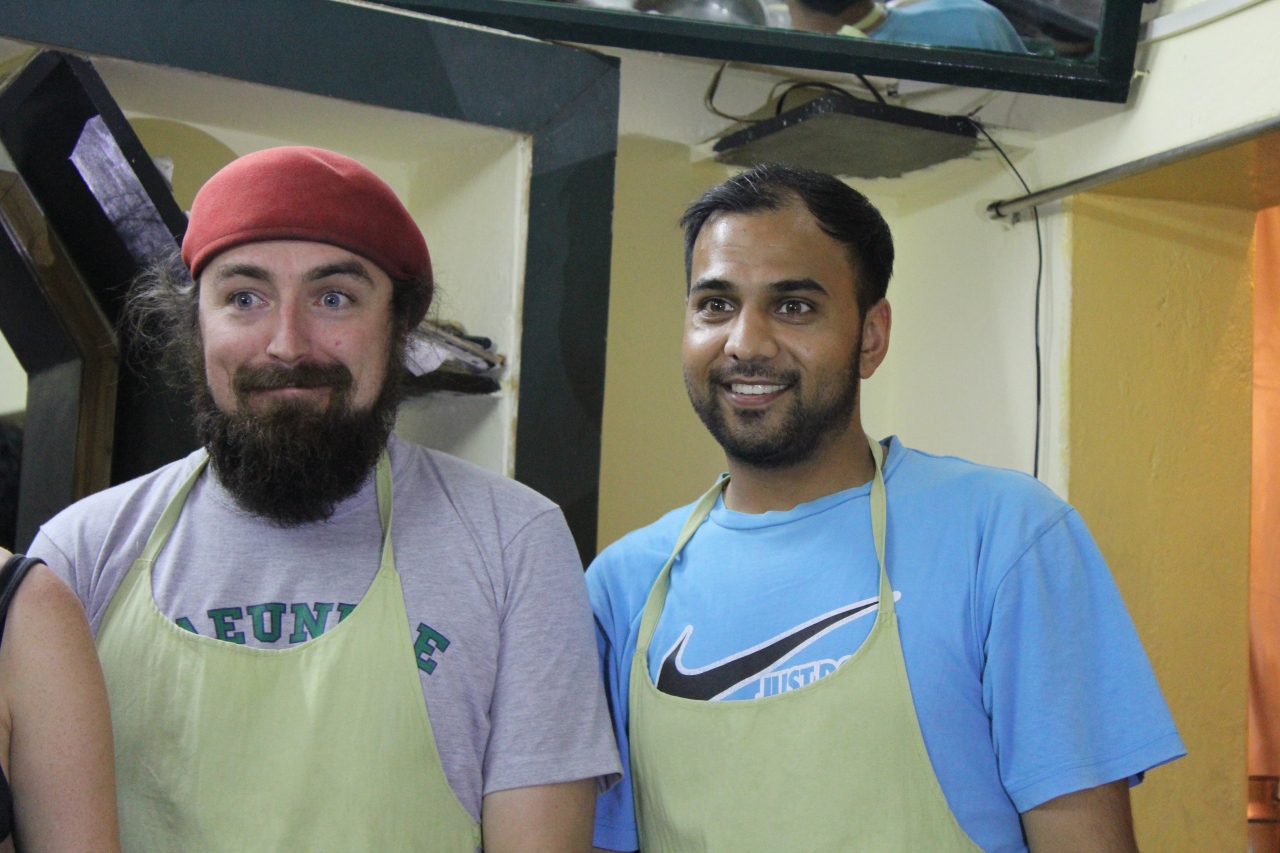 And before he knew it, it was Dan’s turn to step up to the (hot) plate. 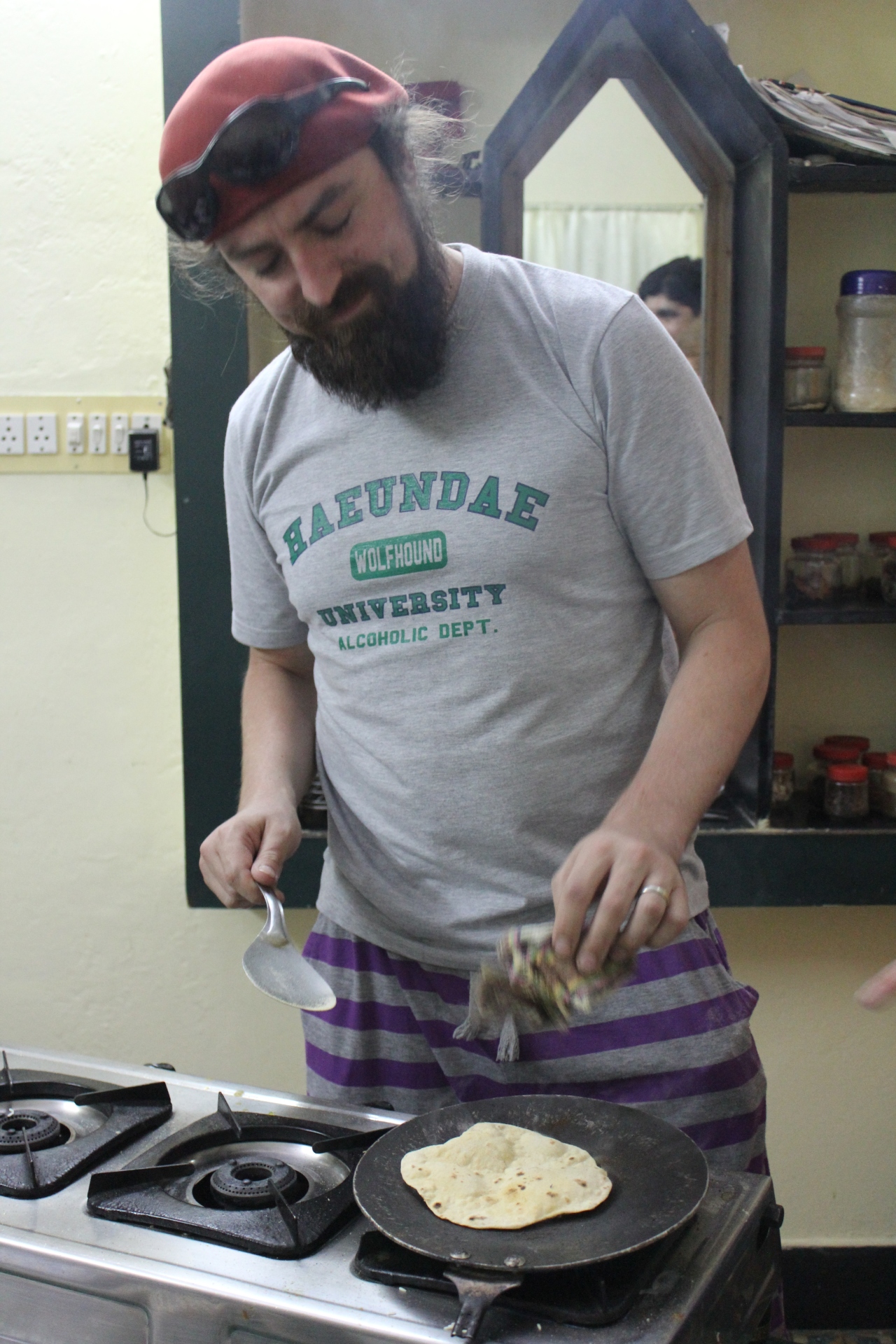 Not a total shambles!  Good thing someone is keeping up the game on the waterfallsandcaribous front!

The pressure was getting intense though – it was getting close to the time that Ushma would take the stage to make chapati.  Would she make her mother proud?  Would Ush win the status of Most Marriageable Member of our cooking class?  Shaking with fear, she confided that her past chapati hadn’t been completely up to scratch.  Would today be the day that she would redeem herself?! 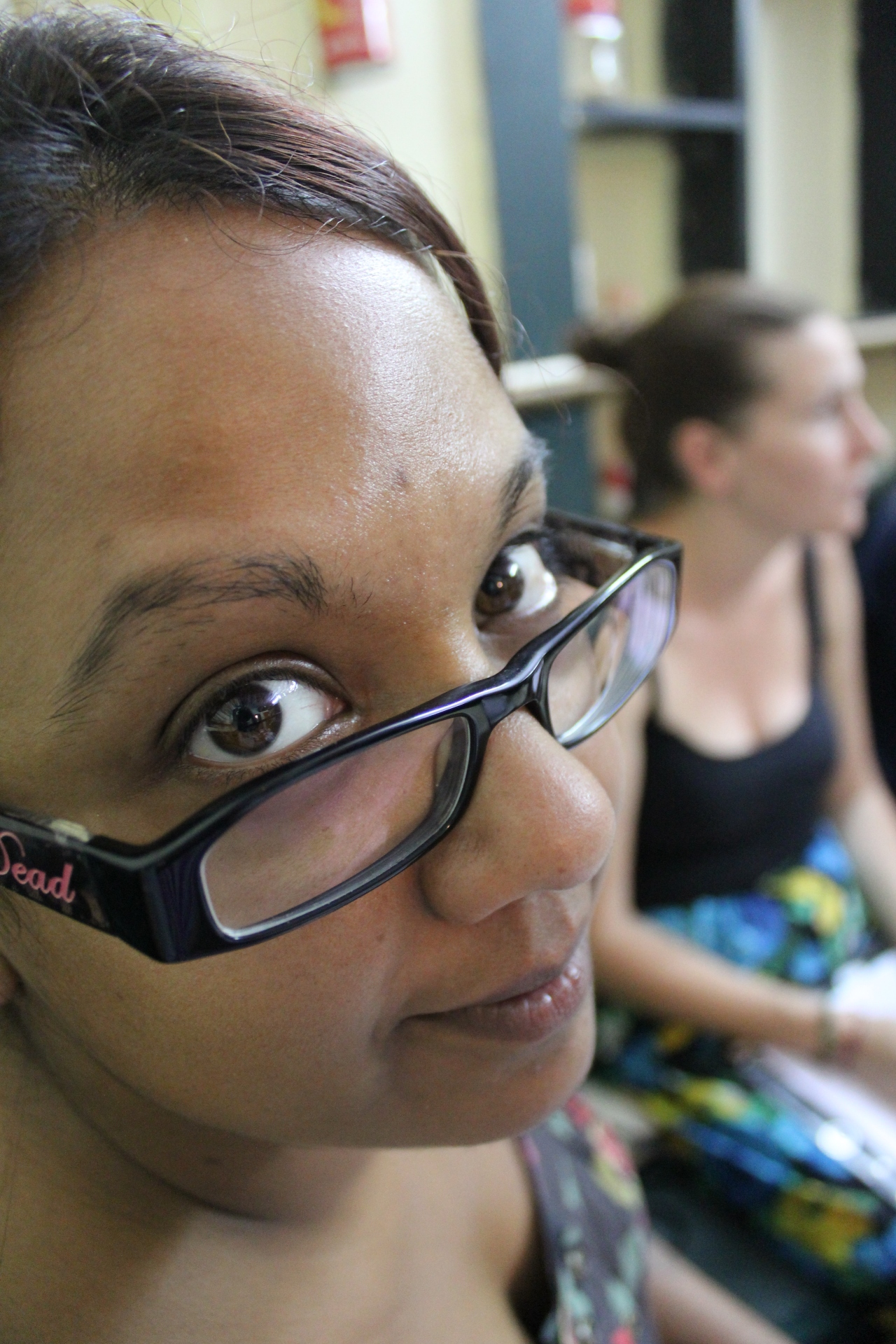 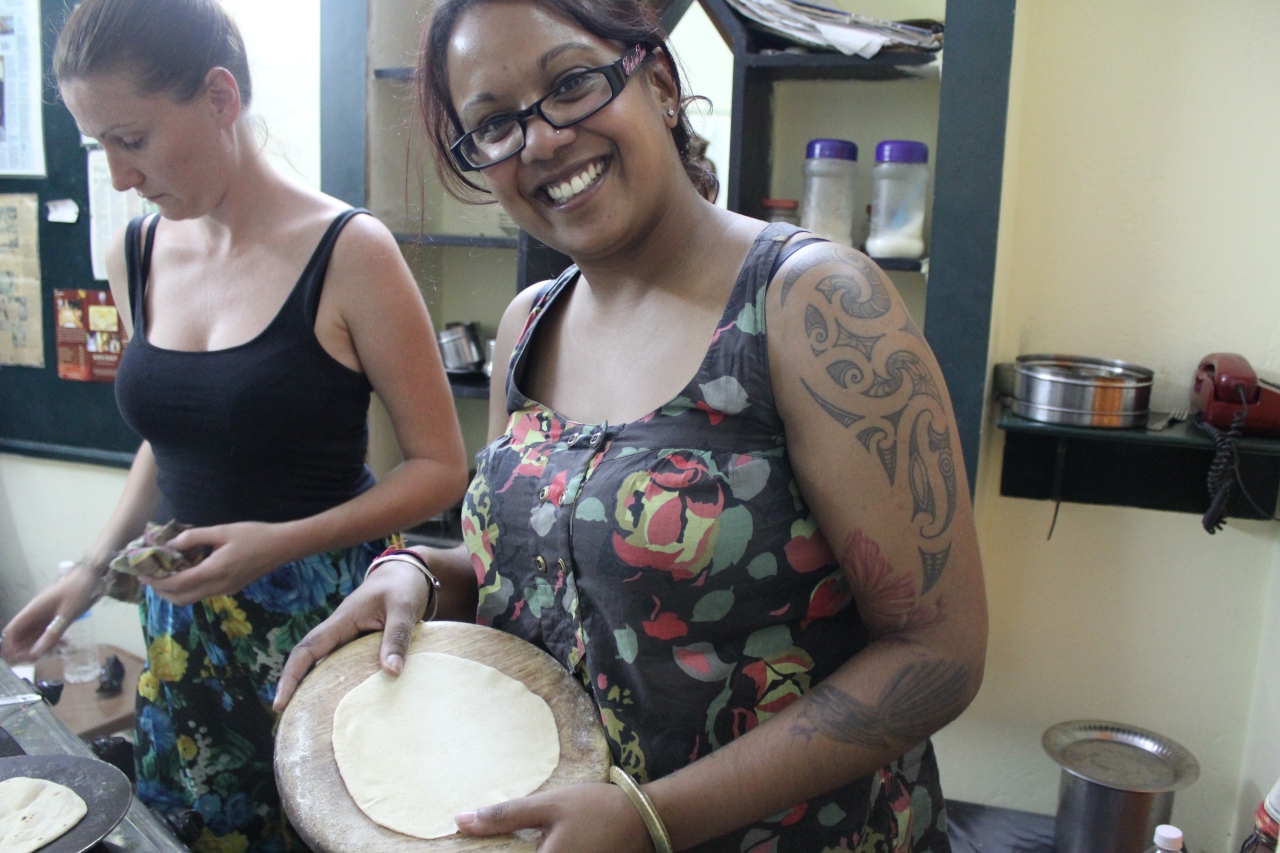 Bringing it on home for a total win, she cooks her round darlings to perfection. 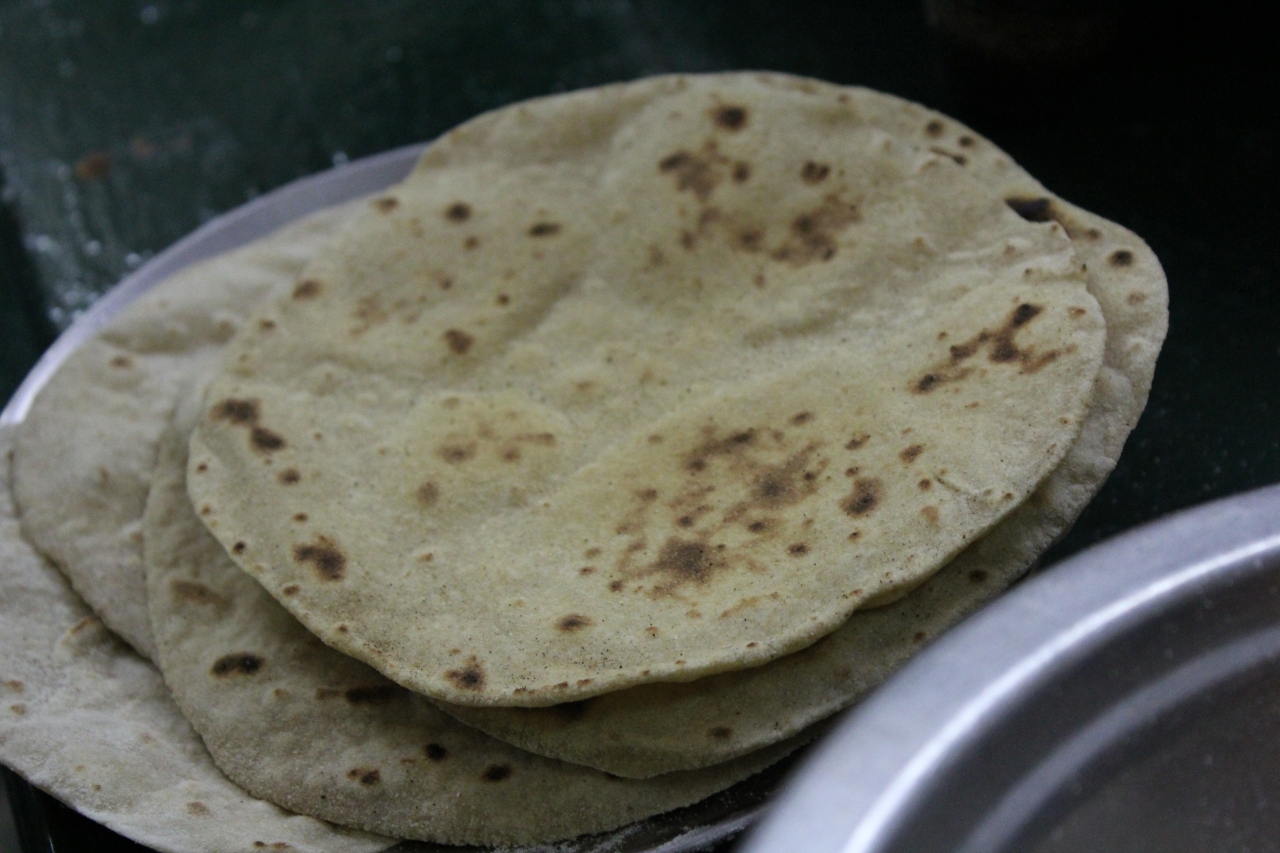 Warm, freshly cooked, (mostly) round chapati from the crew meant only one thing – it was time to put it all together and eat our feast!  The end result – delicate little blobs of our hard work, serious note-taking and sore abdominals from laughing so much.  Quite delish! 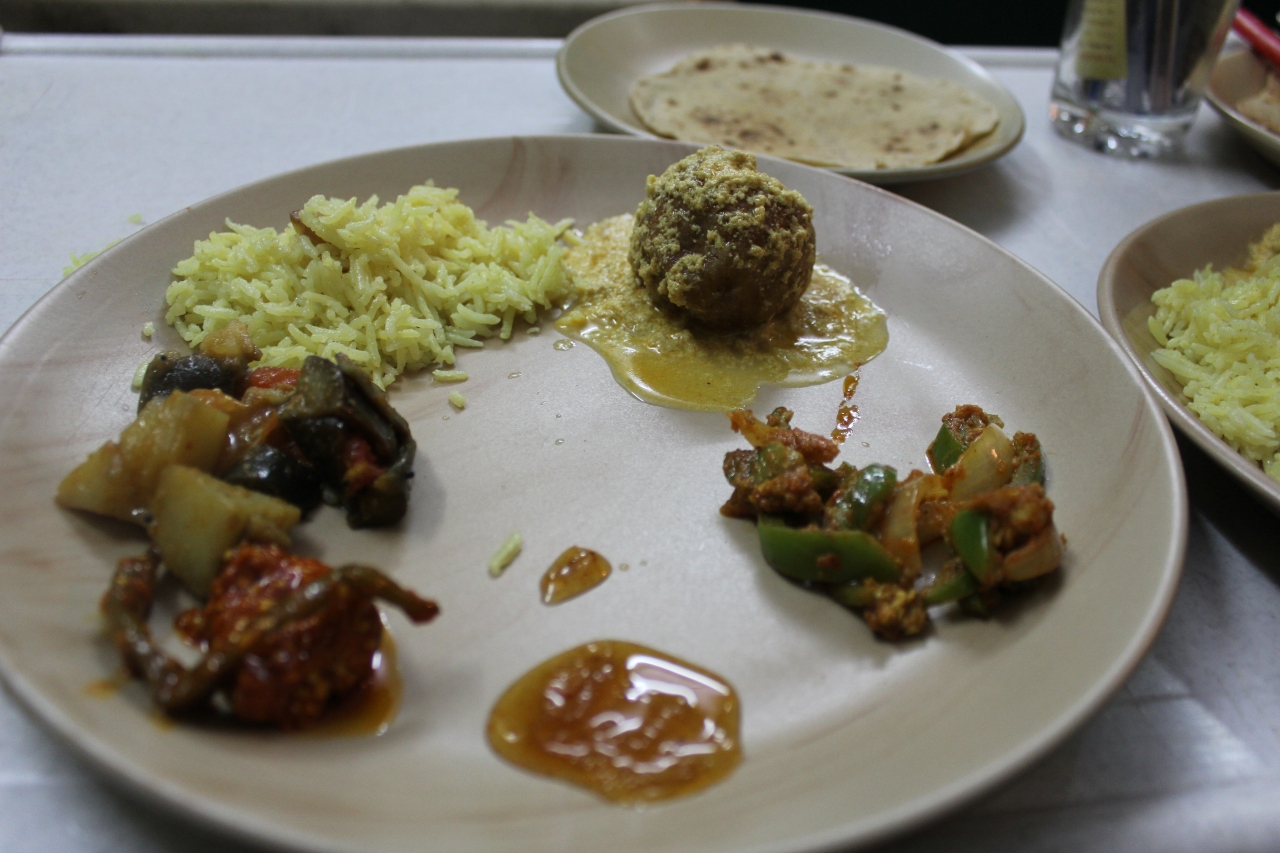 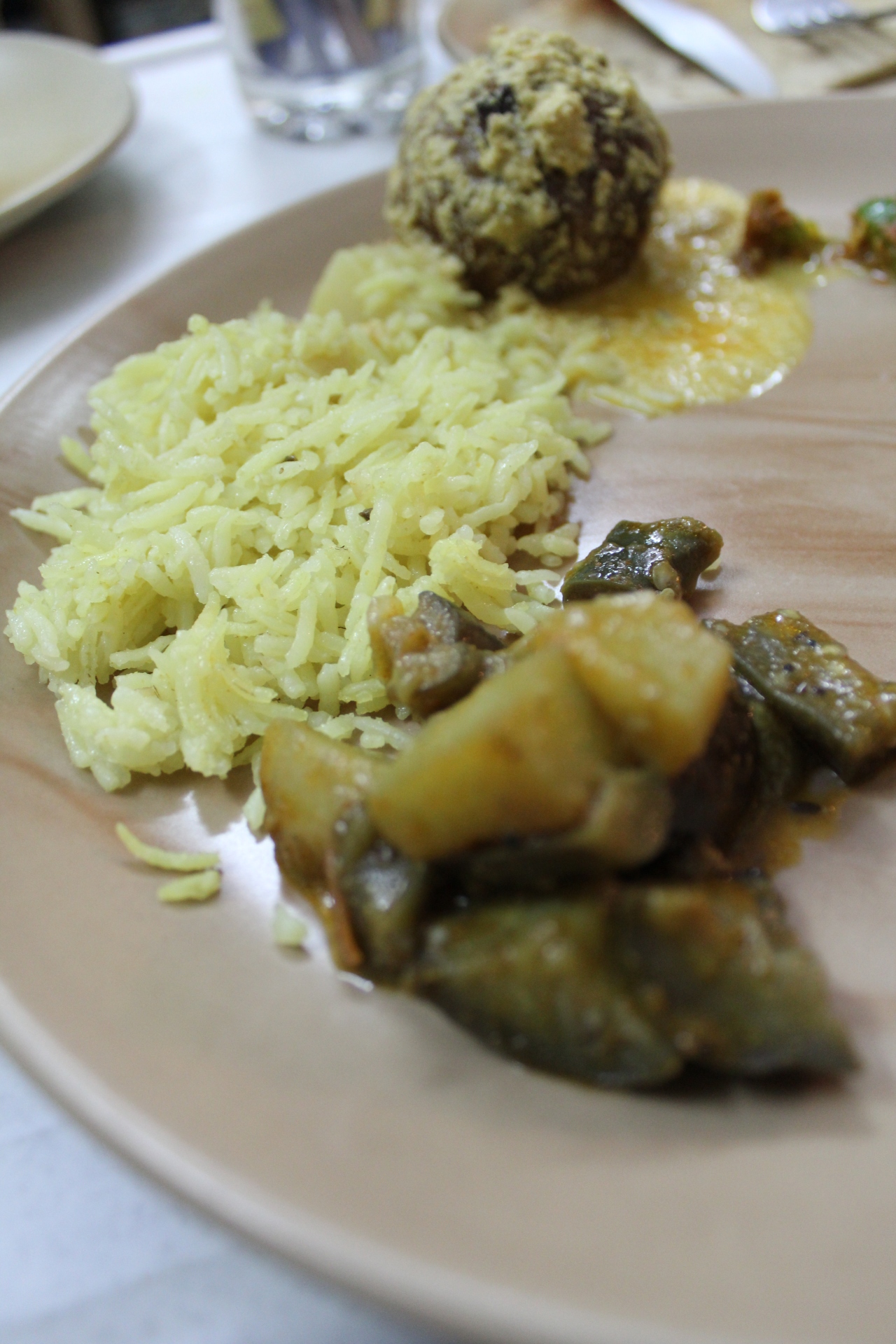 Oh and check out the roundness of that chapati lurking in the background!  Someone’s gunna make a good wife. 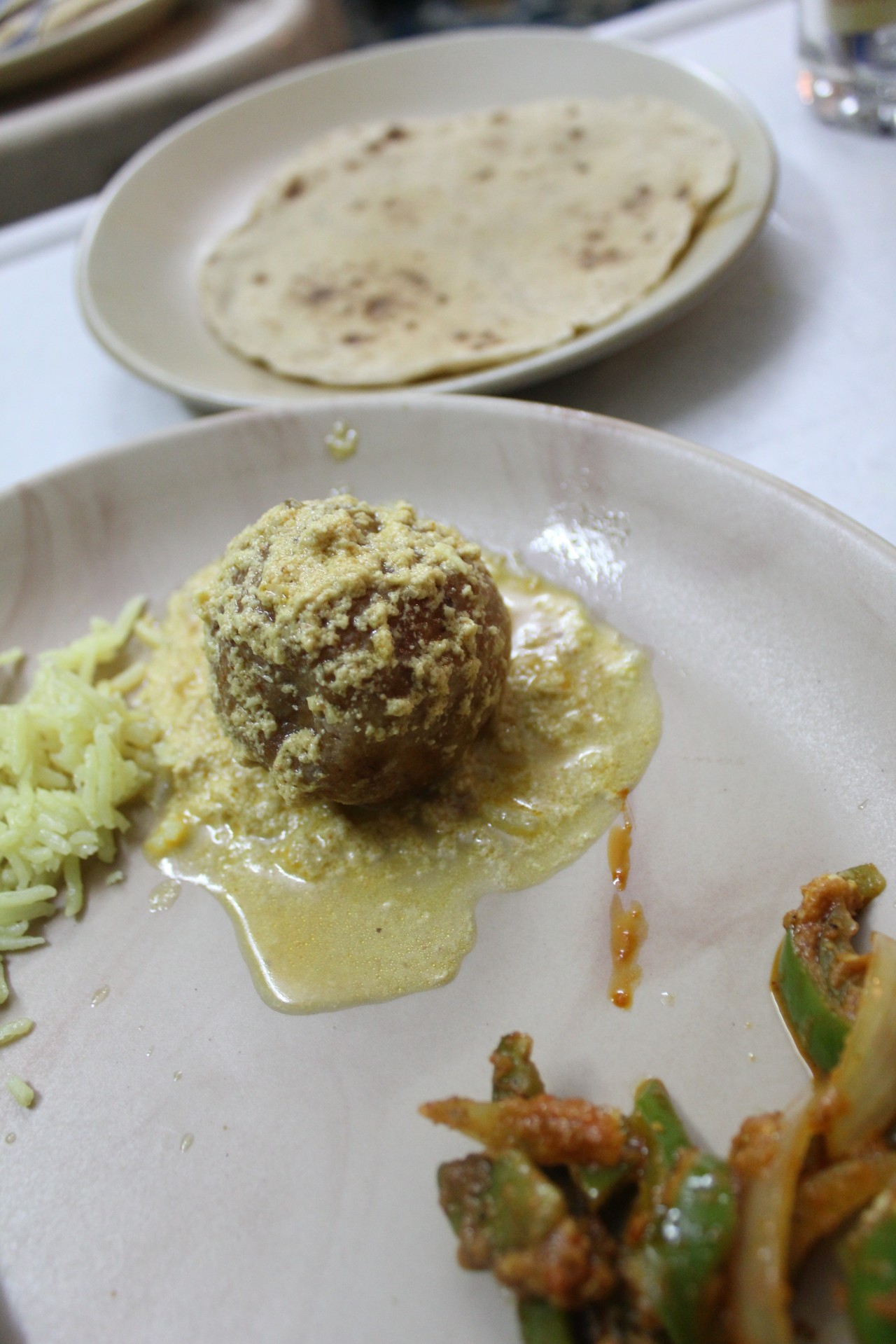