Busan – The B sides

In the last 12 months, Busan has provided us an often much needed escape from the humdrum of village life. Jumping on the train towards the second biggest city in Korea has always brought a unique adventure, most of which we have reported back to you, our dear readers.

During the course of our travels, Busan has always put a smile on our faces with all the new things and experiences we have every time we visit this fair city. Here’s our guide to the other bits and pieces you should see/eat/do in Busan.

The markets in Busan are incredible.  Of course, Jagalchi fish market is one of our absolute favourite sights in all of Korea, but if you’re not in the mood for fish Busan has other ways to impress. 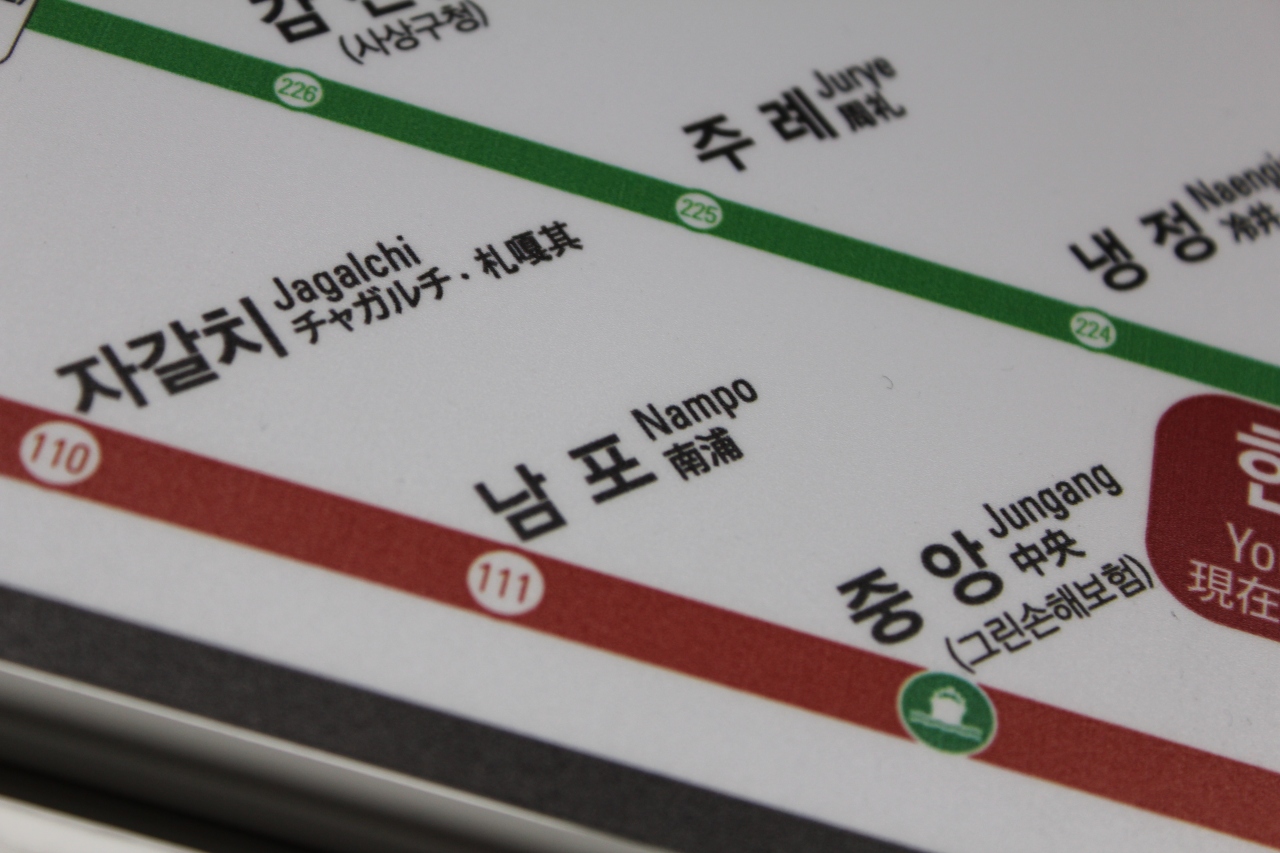 In the same area lies an incredible intersection of three markets – Gukje, Gwangbok-dong and Nampo-dong markets. Gukje is the largest traditional market in Busan and steeped in history due to its humble beginnings during the Korean War as a place for refugees to try to eke out a living.  Over time it has grown into a huge, heaving market that together with the neighbouring two markets provides a breadth of goods that is mind blowing. 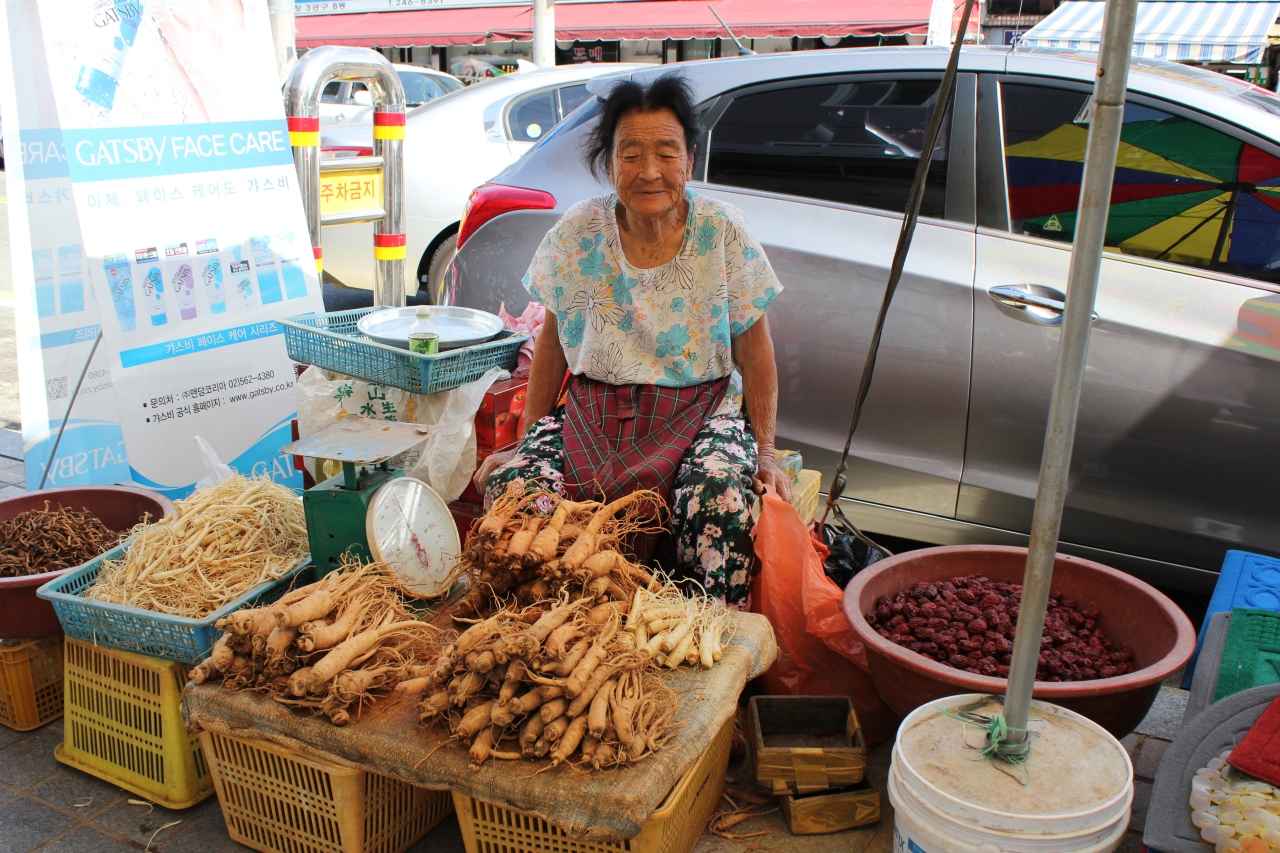 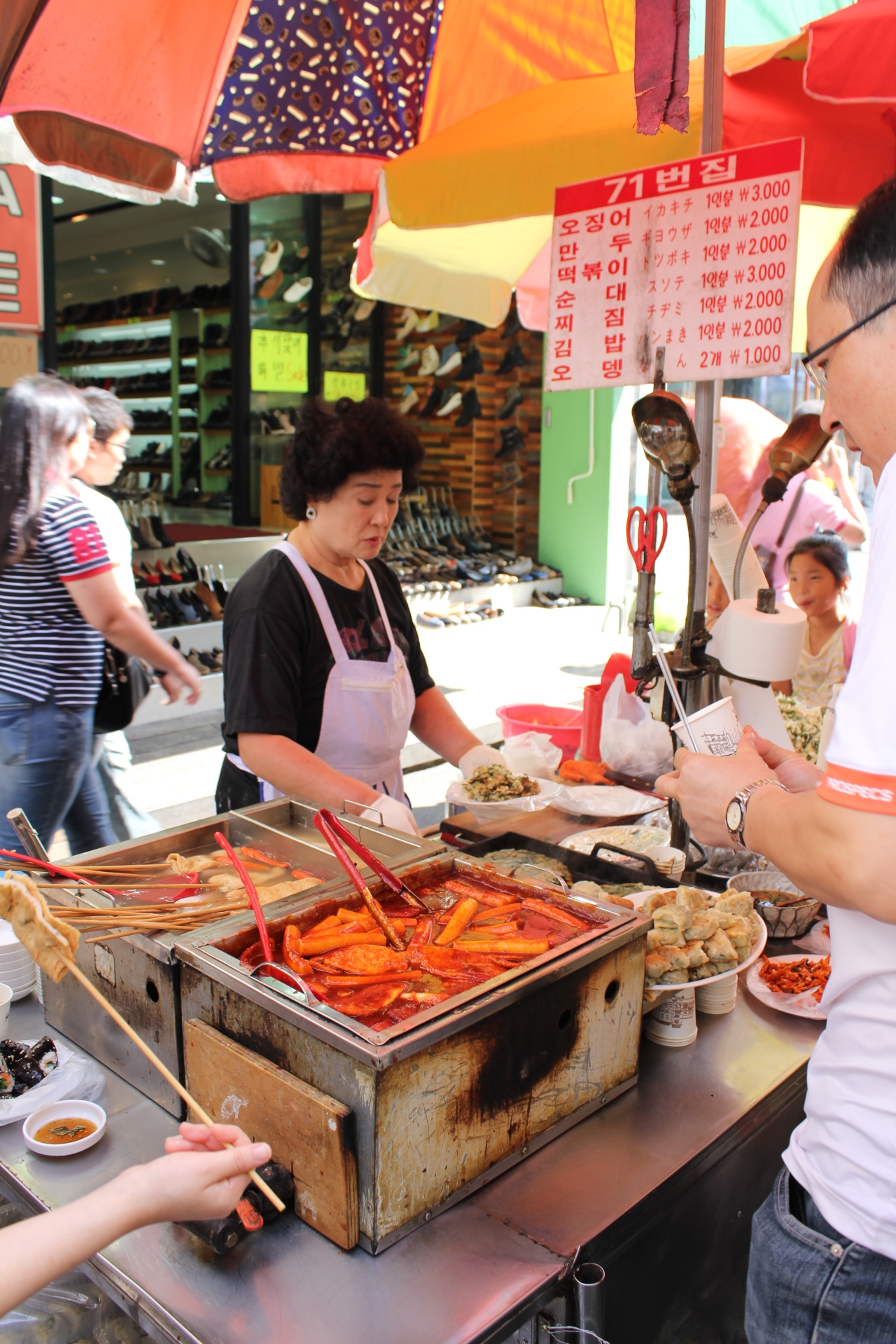 This little girl was dressed in the traditional hanbok but looked really pissed off when her dad whipped her off the ground for us to take a photo.  An angry child? Yeah, we’re kinda used to that by now.  Next!

The markets cater for everyone. It has lots of K-pop paraphernalia. 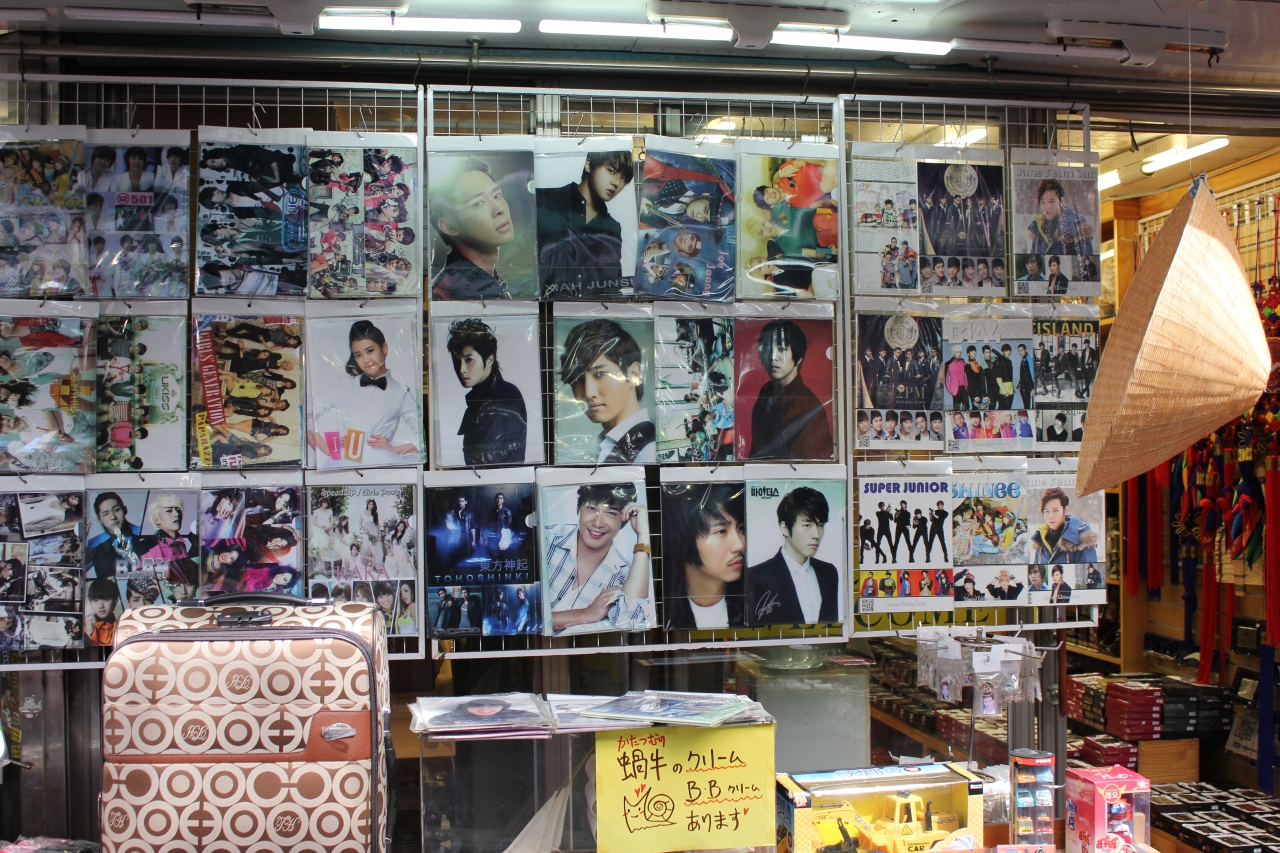 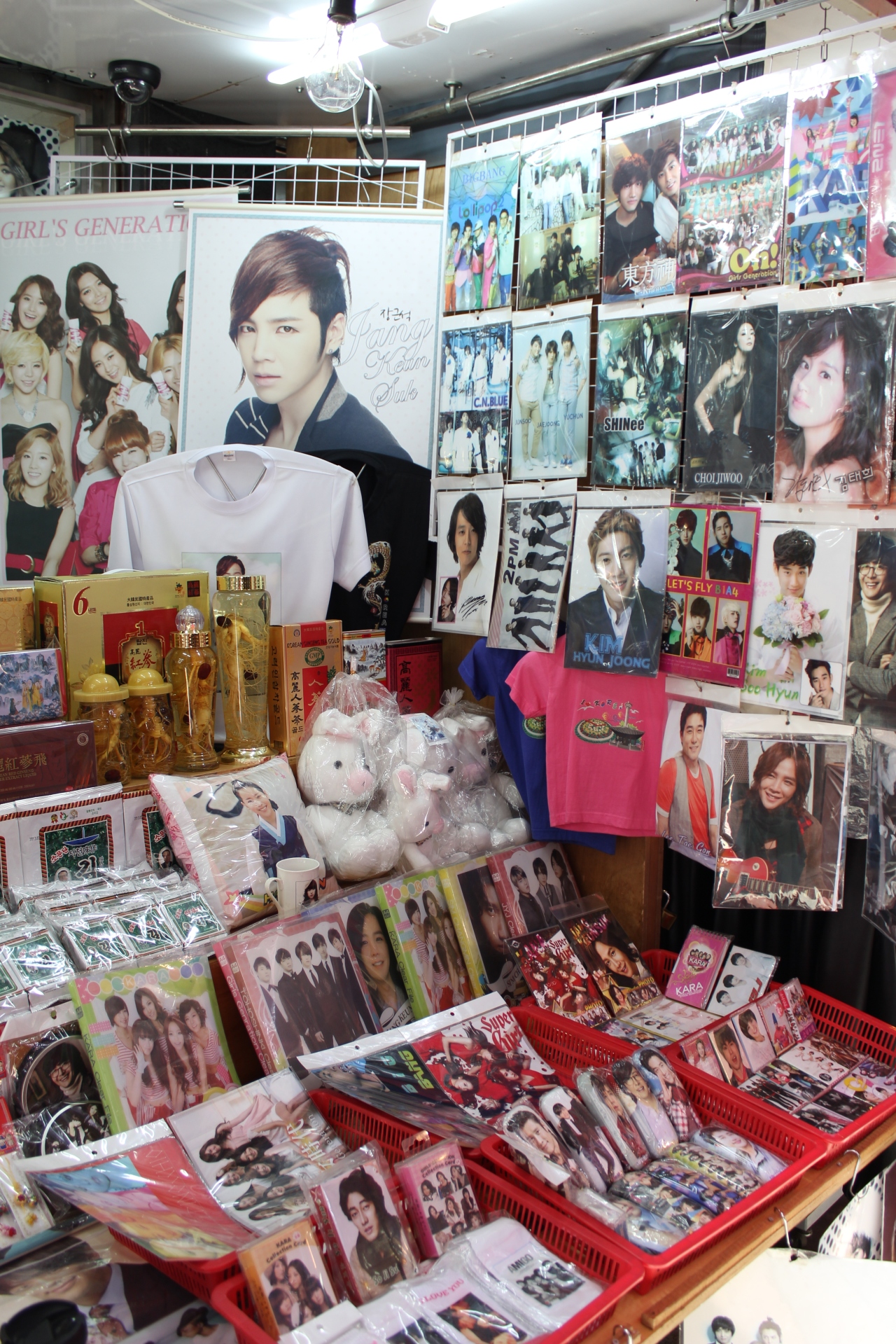 Fake designer handbags for those that want to look the part.

and MOST importantly a wide range of dog fashion!!! 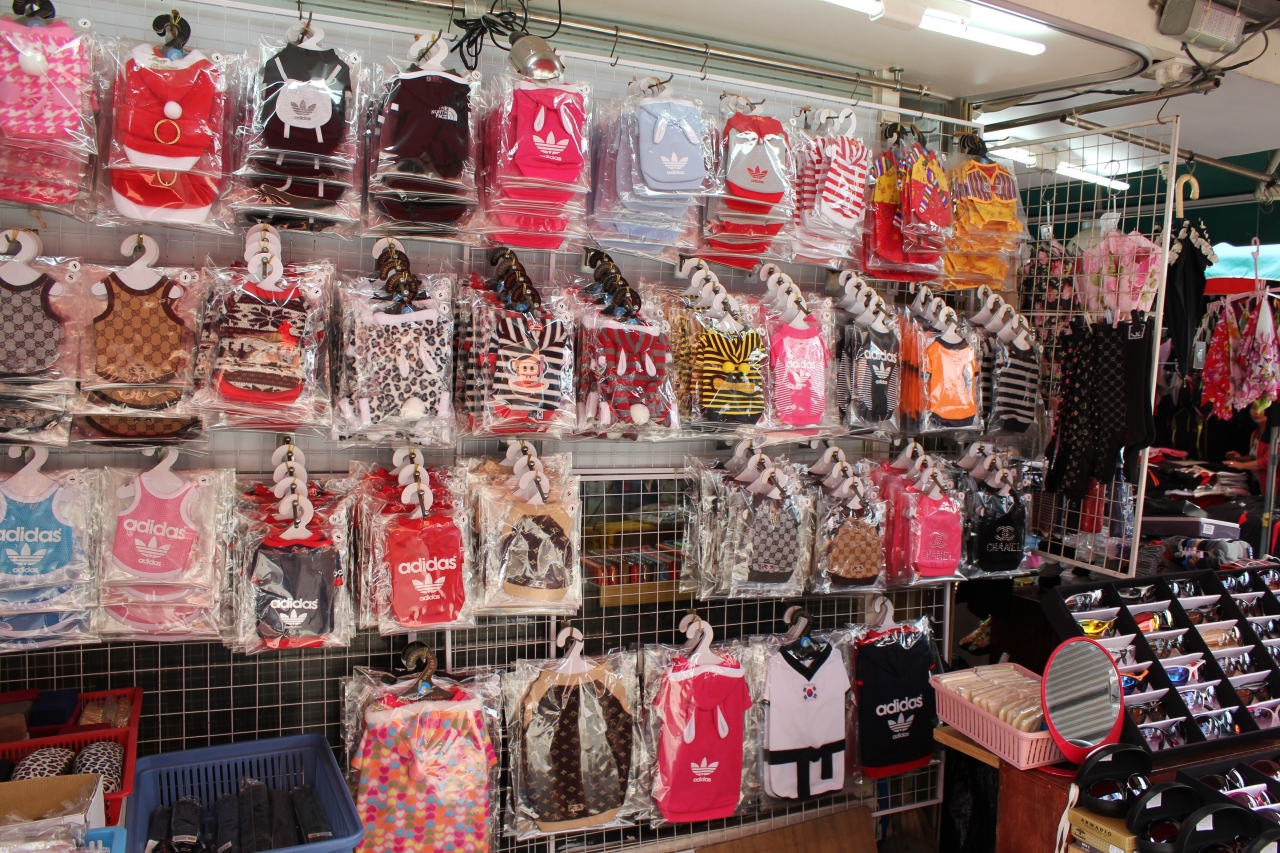 The markets go on for blocks and blocks and eventually start encompassing more boutique fashion stores. 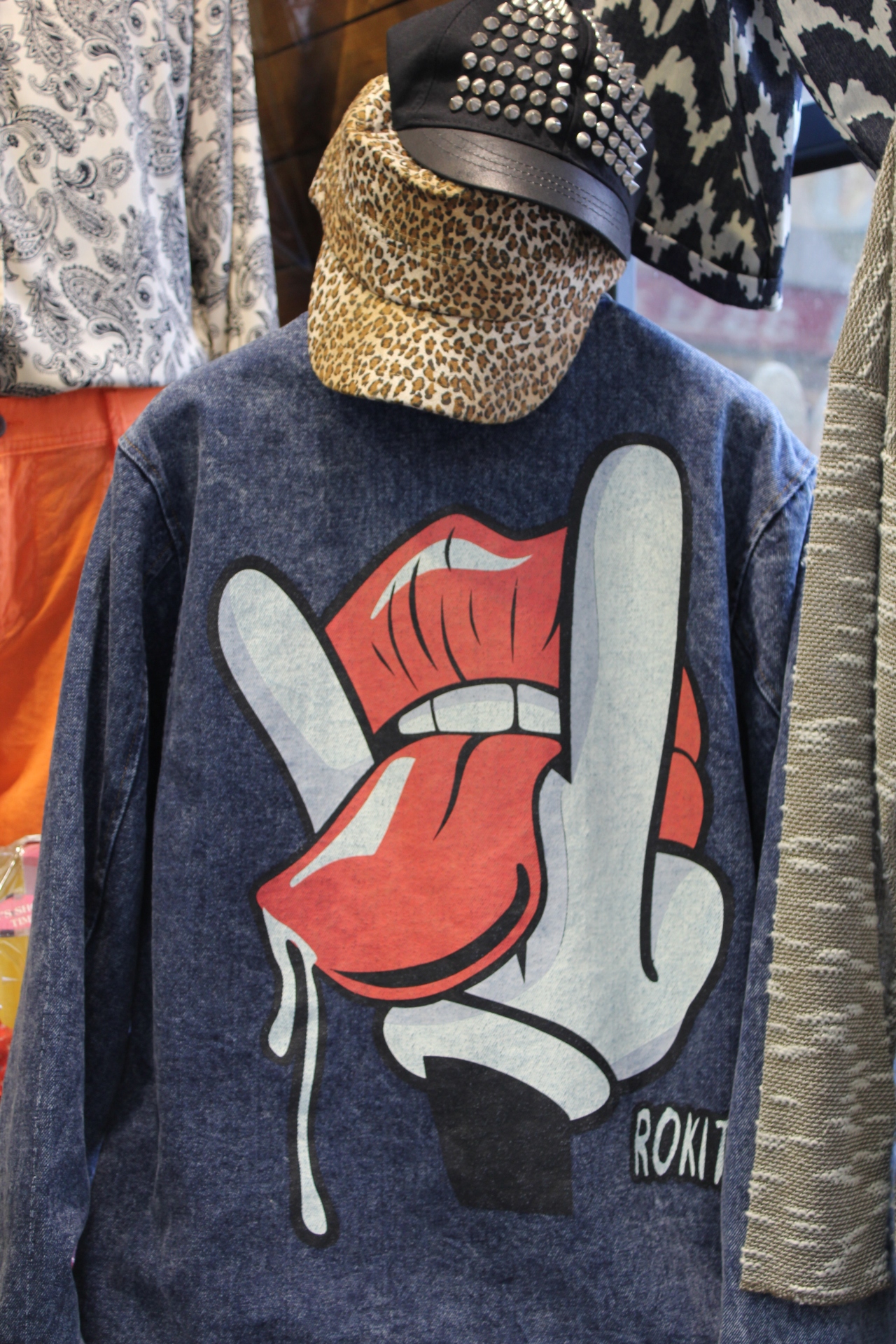 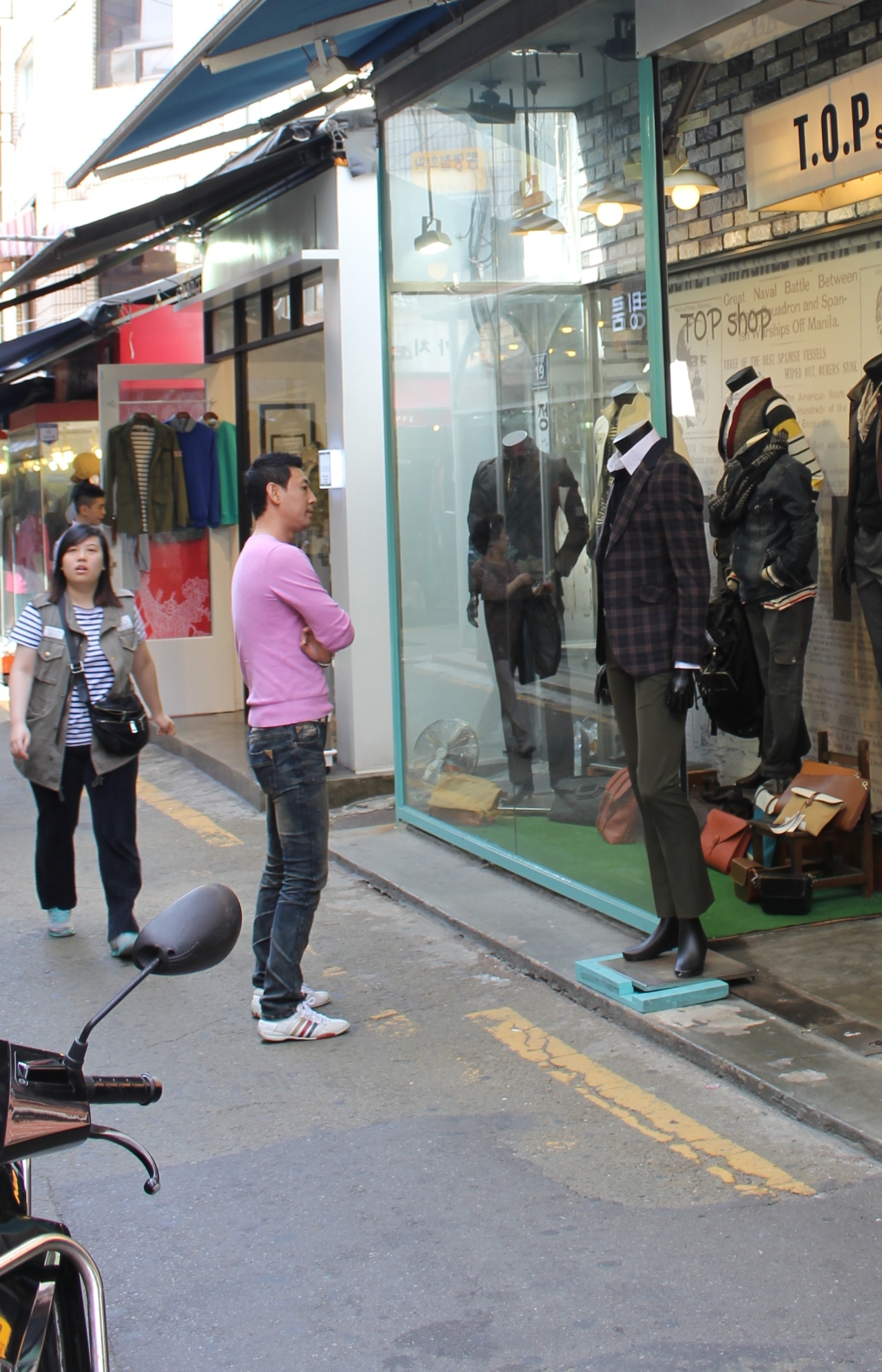 Pretty soon you hit the main drag of Nampo-dong and the big brands are represented heavily down the street. 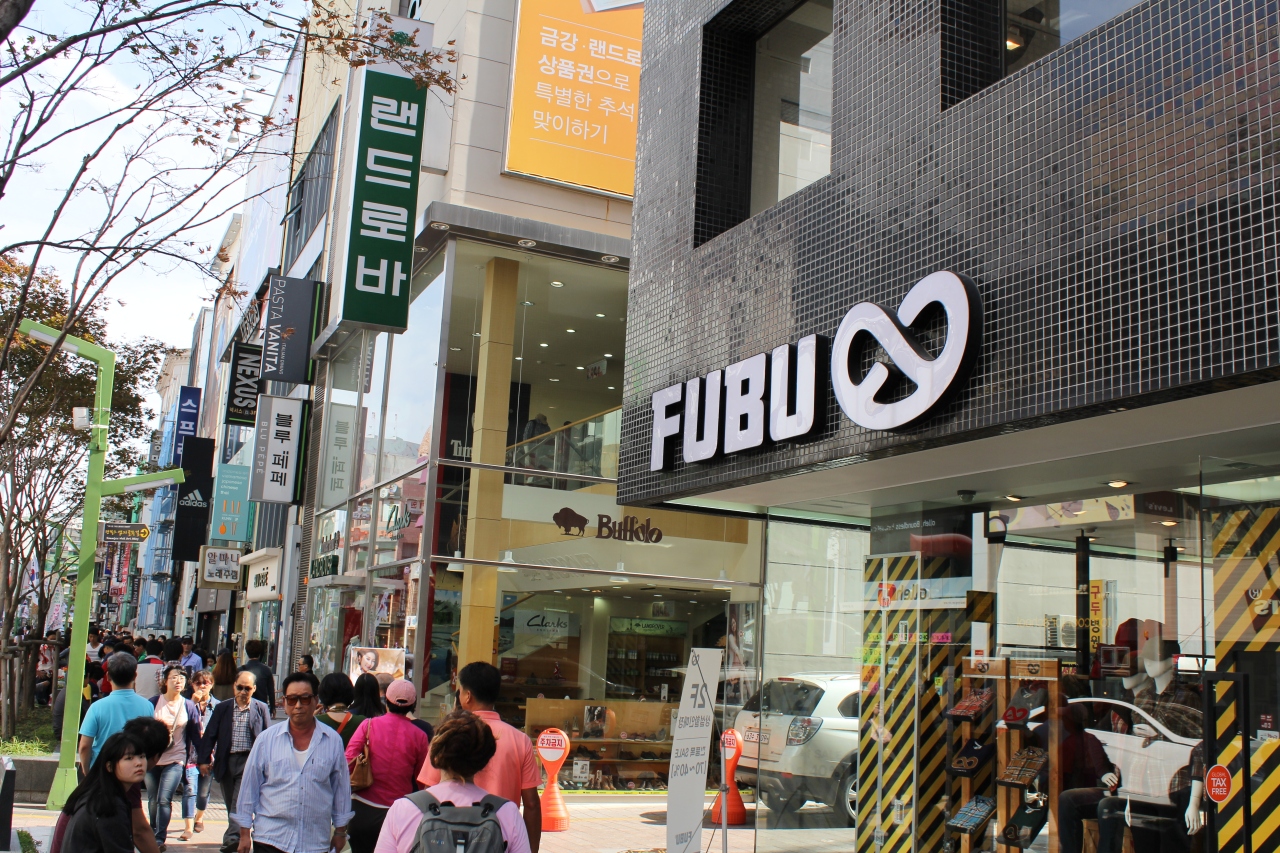 Which leads to another one of Busan’s hidden gems – the Samjee Wall Art Alley.  Its a sneaky little creature and information on it is rather hard to find.  The art is pretty cool though!

Different styles of street art line the walls of this dark little side street. 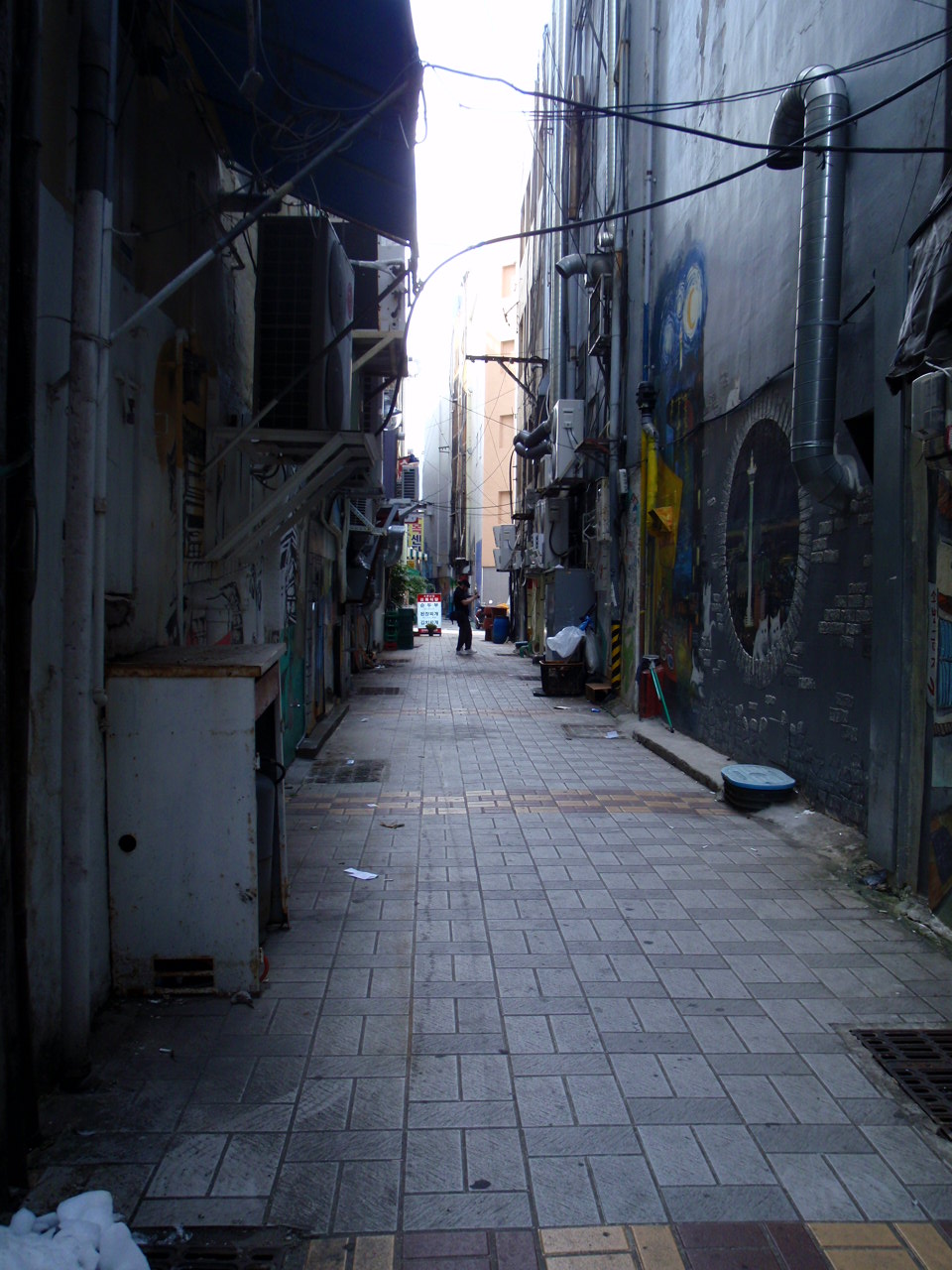 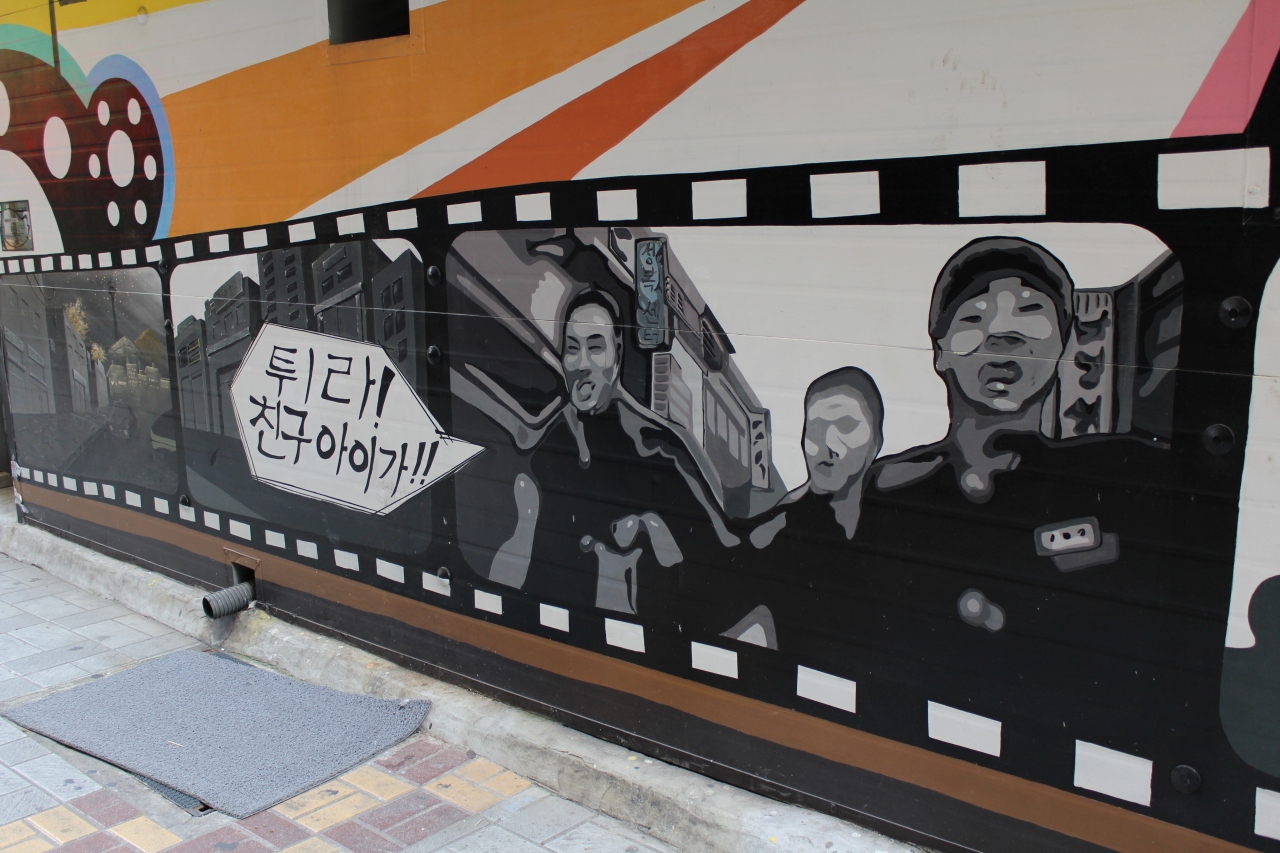 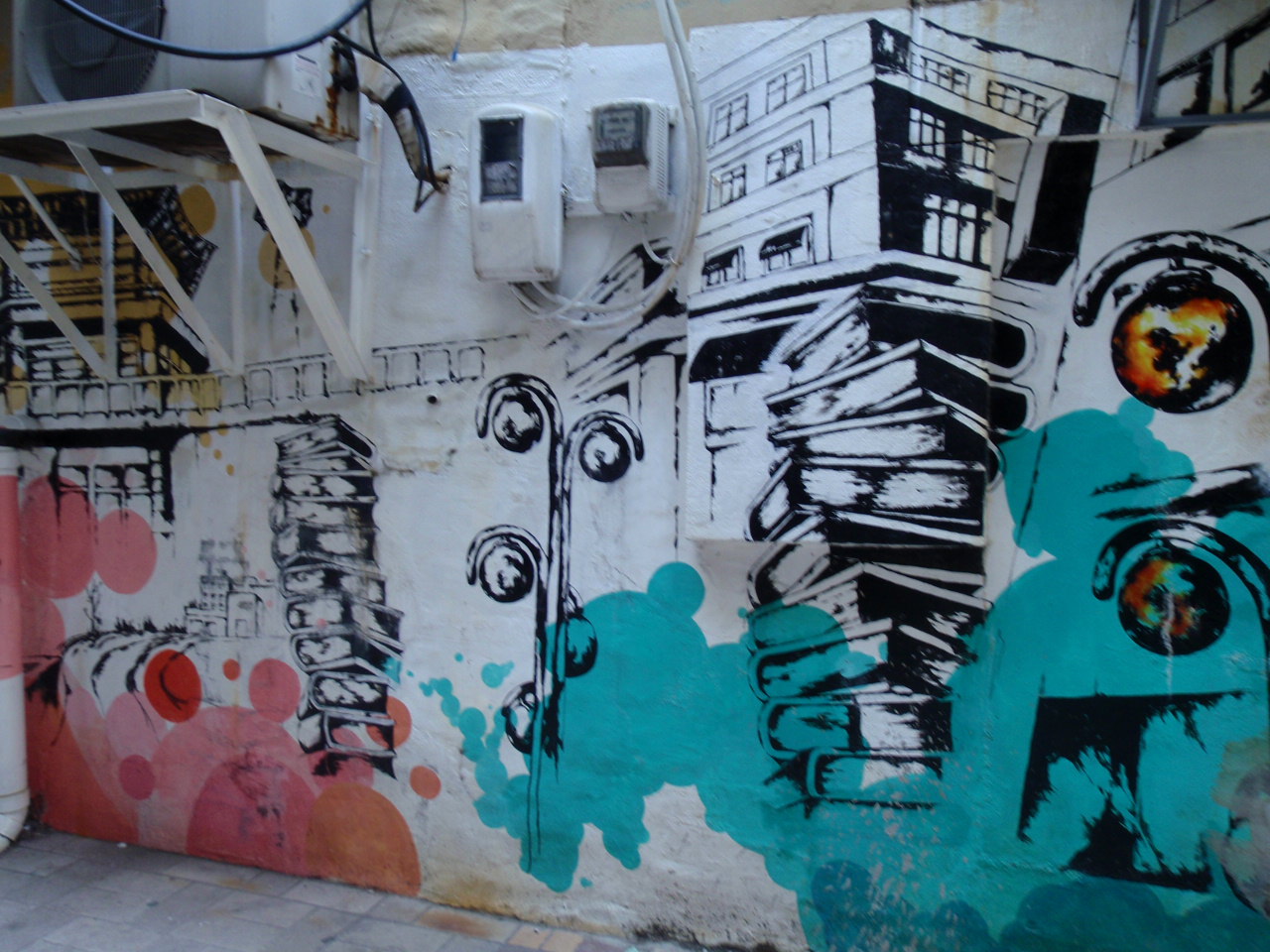 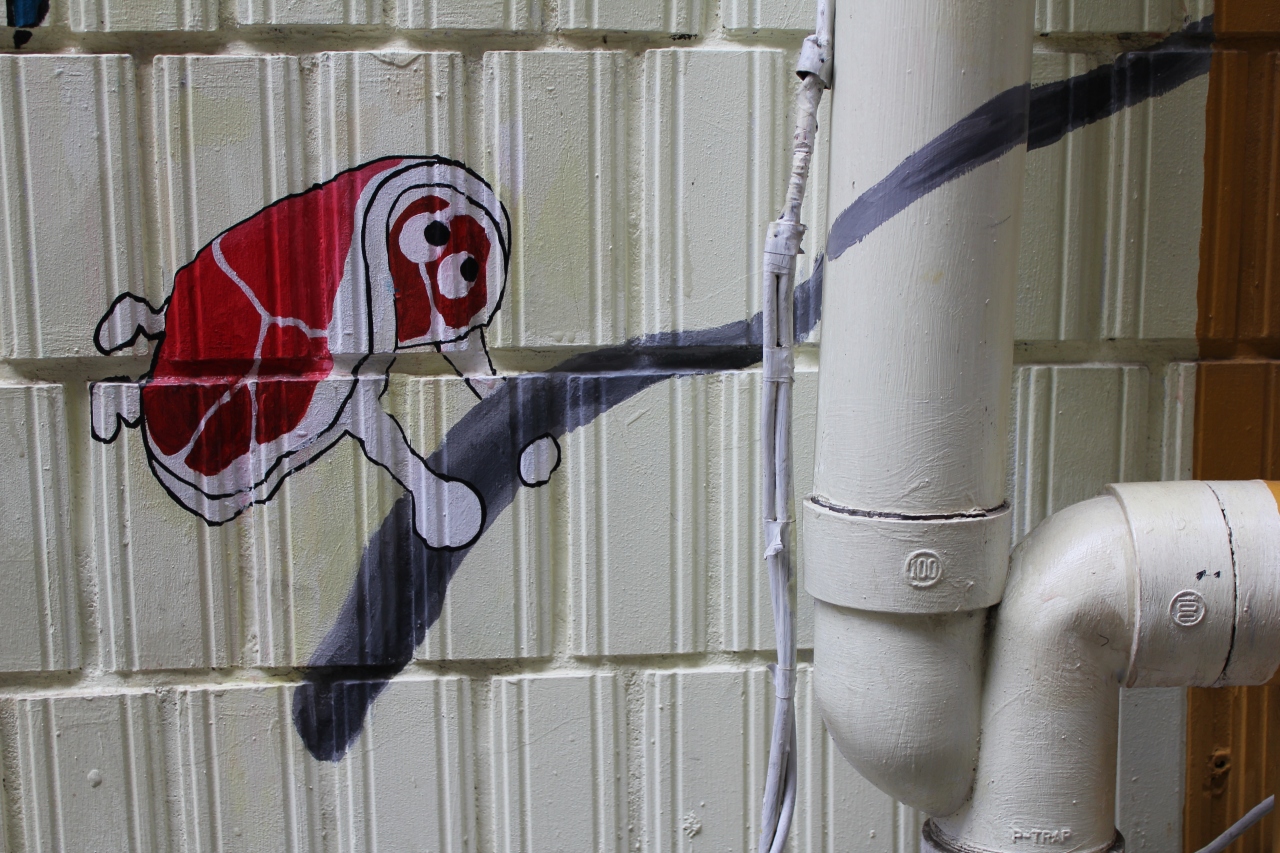 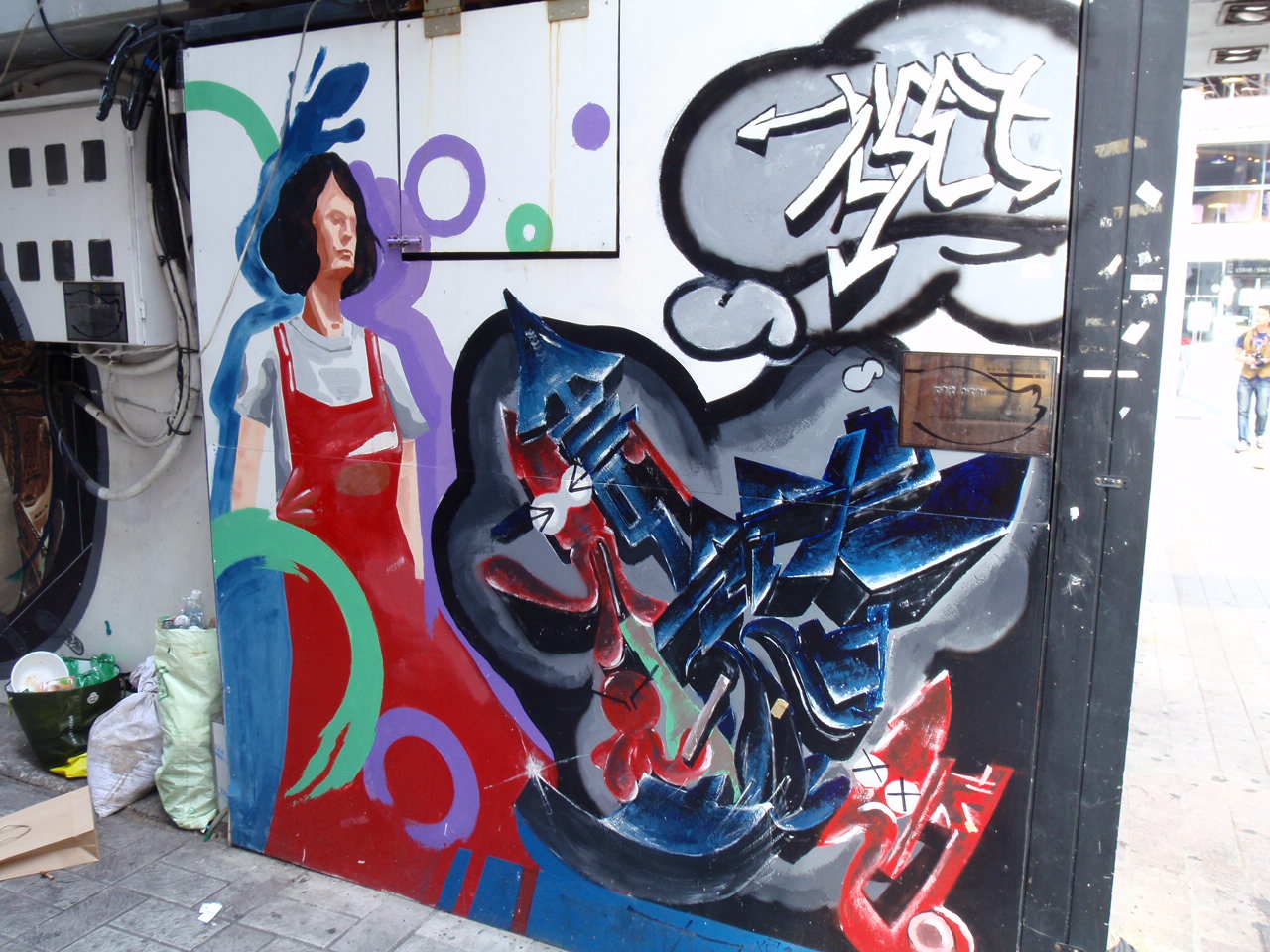 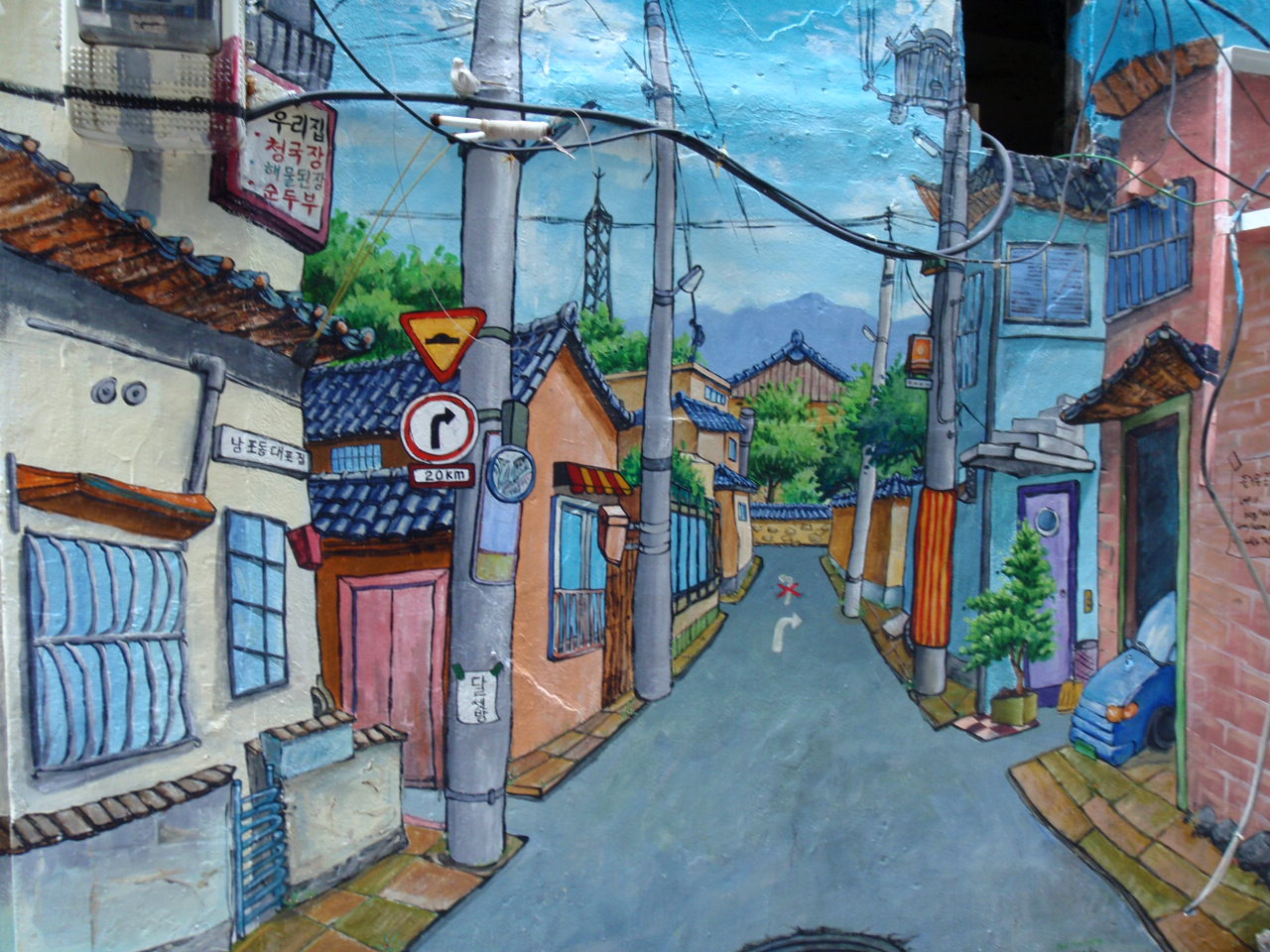 Busan has quite a bit of street art hiding in its nooks and crannies,  While we’ve concentrated on a few key areas in our street art posts, a few random pieces have cropped up around and about the place so it seems key to include them here. 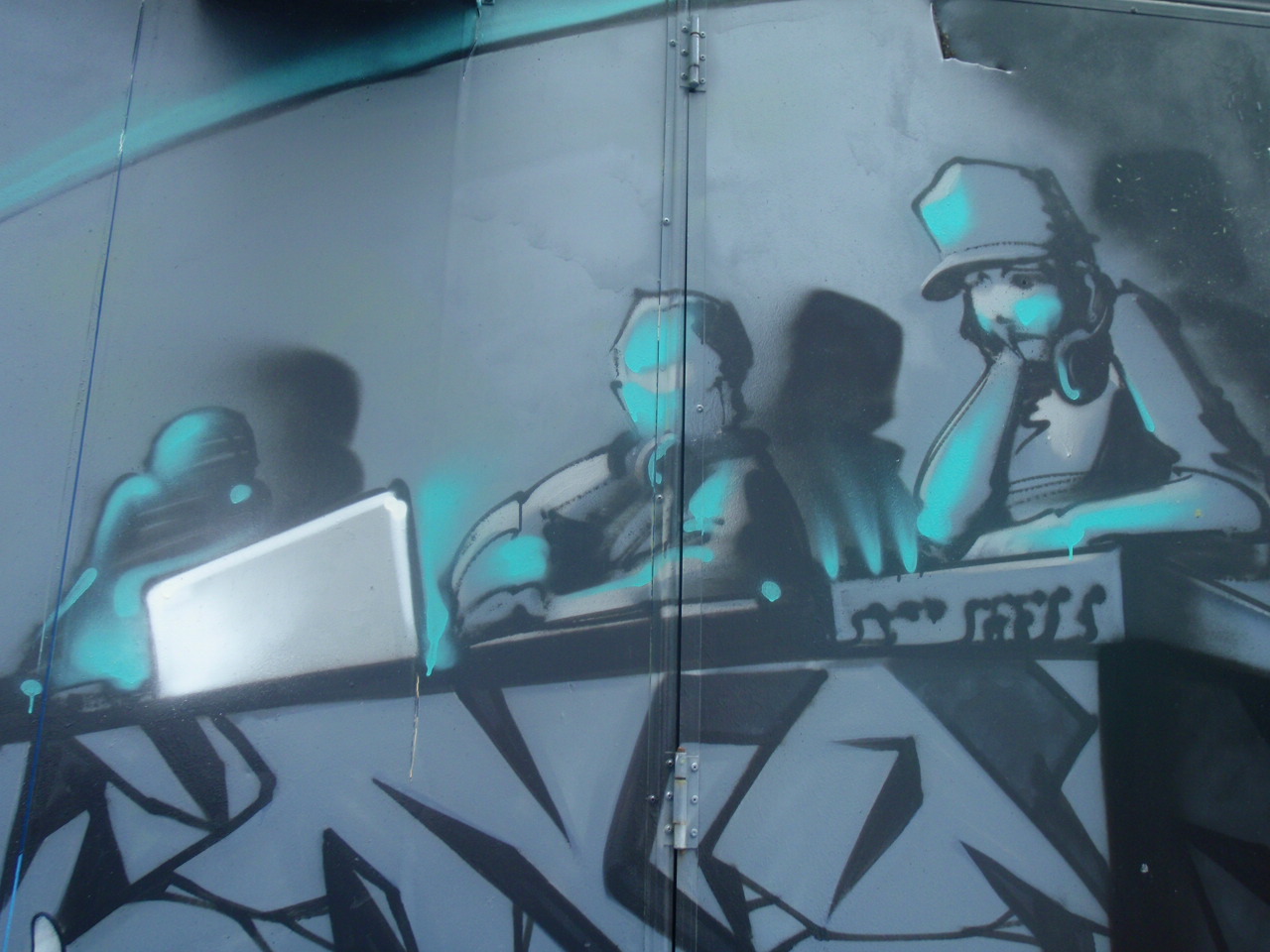 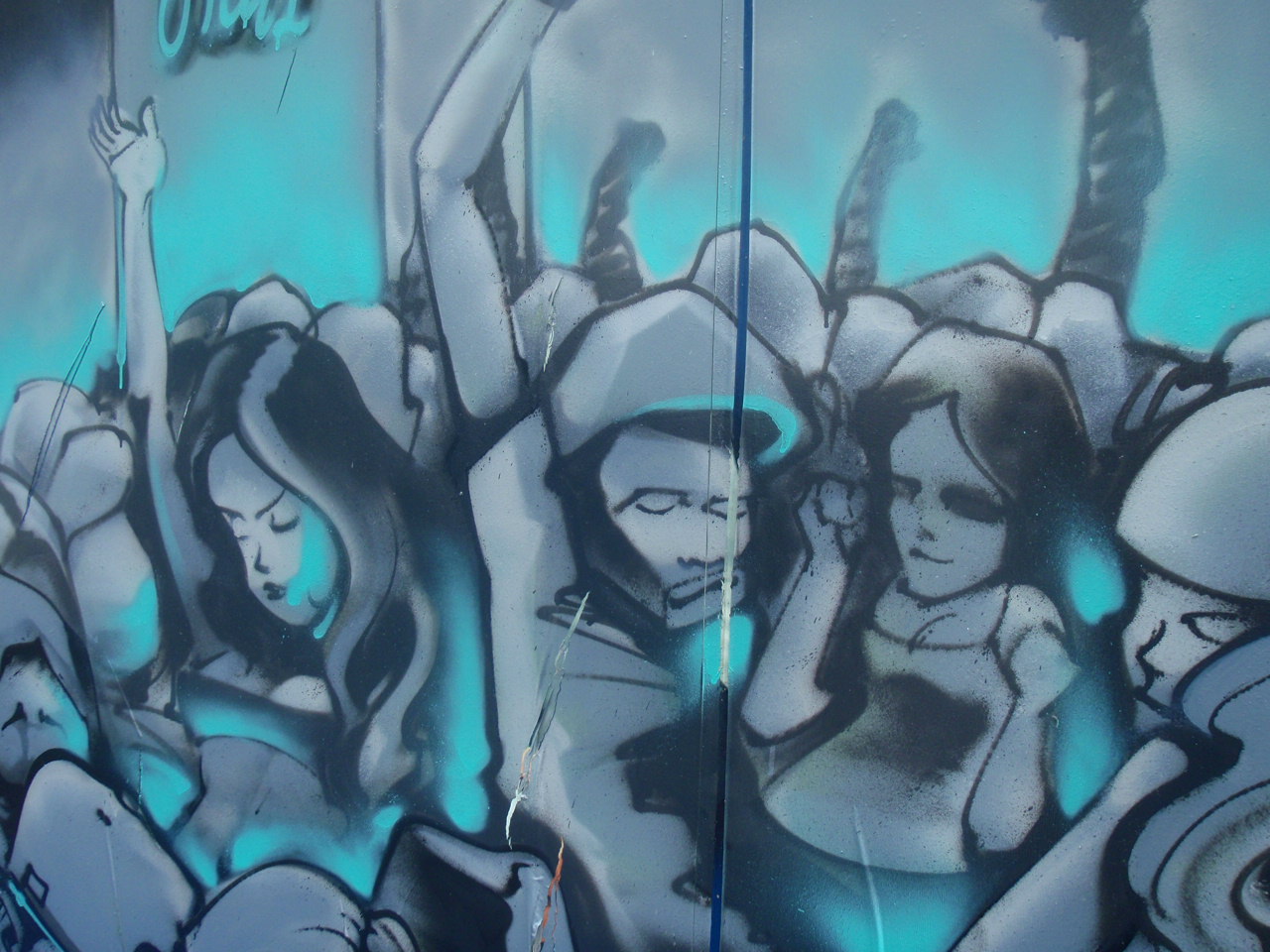 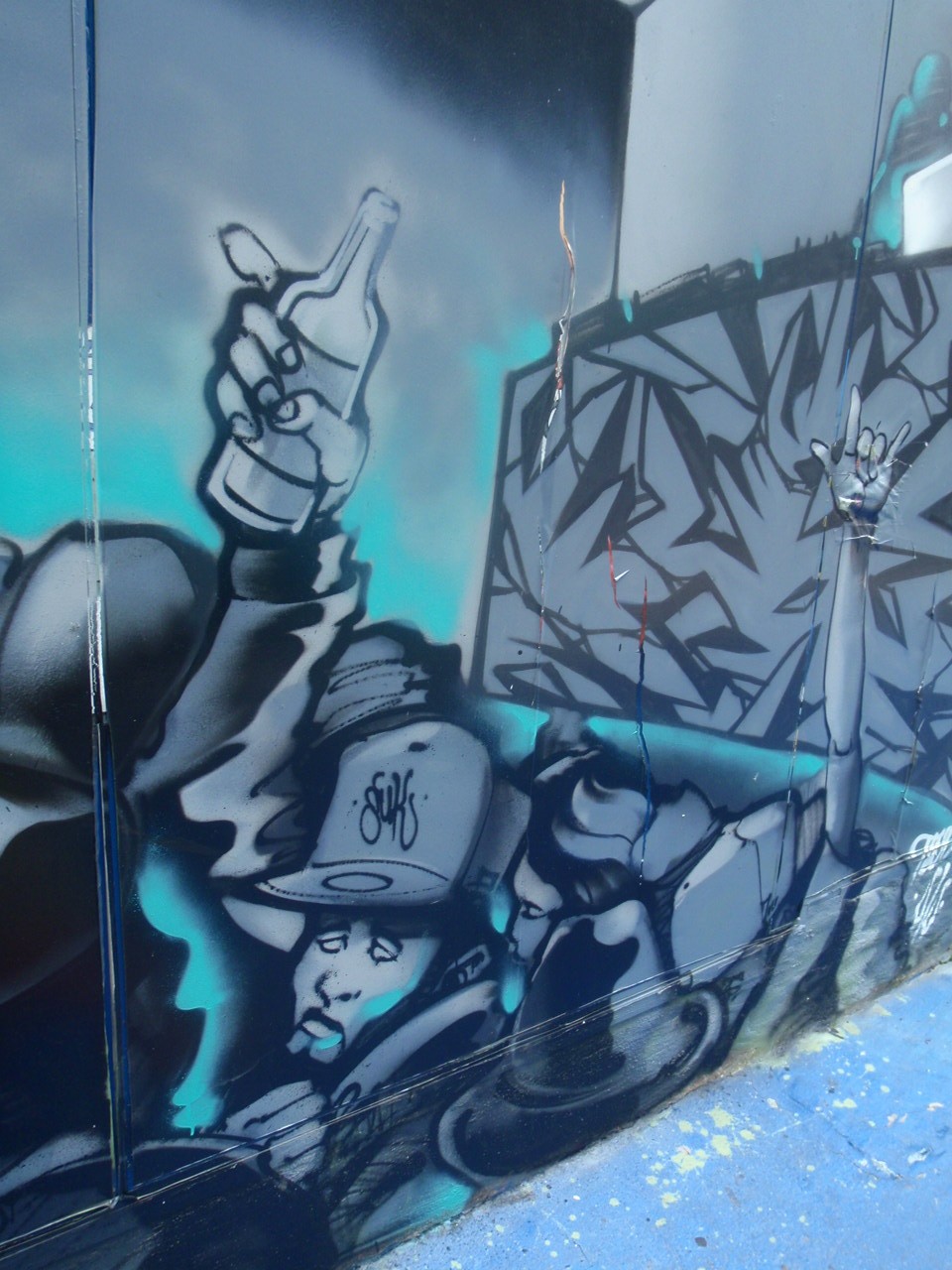 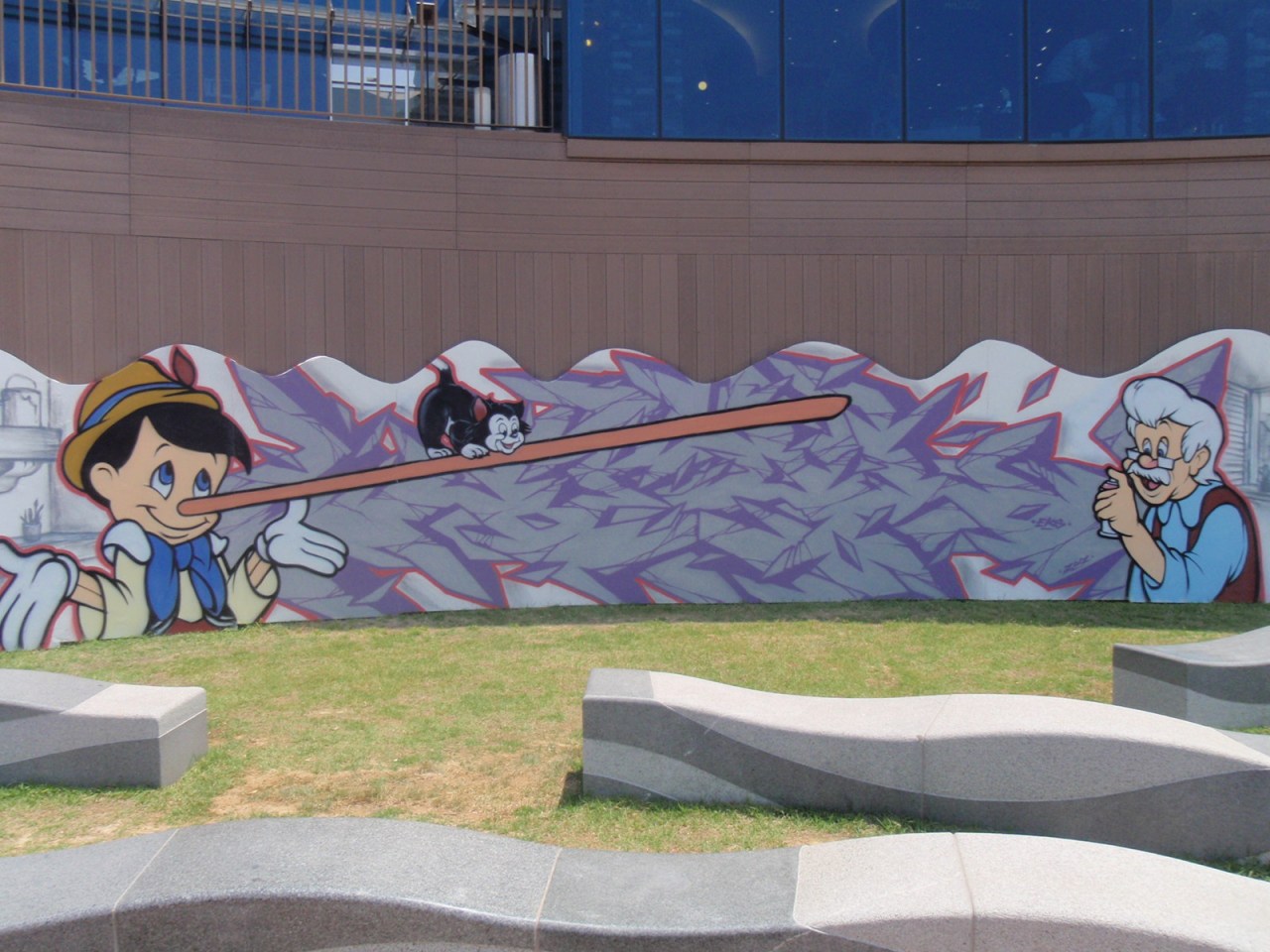 Another highlight for us little Kiwis here in Busan has been the ‘foreigners’ area of Choryang.  Its a little slice of China/Russia/Uzbekistan/the Phillipines right in the heart of the city – and for those of who come from the bottom of the world, this is pretty darn exotic! 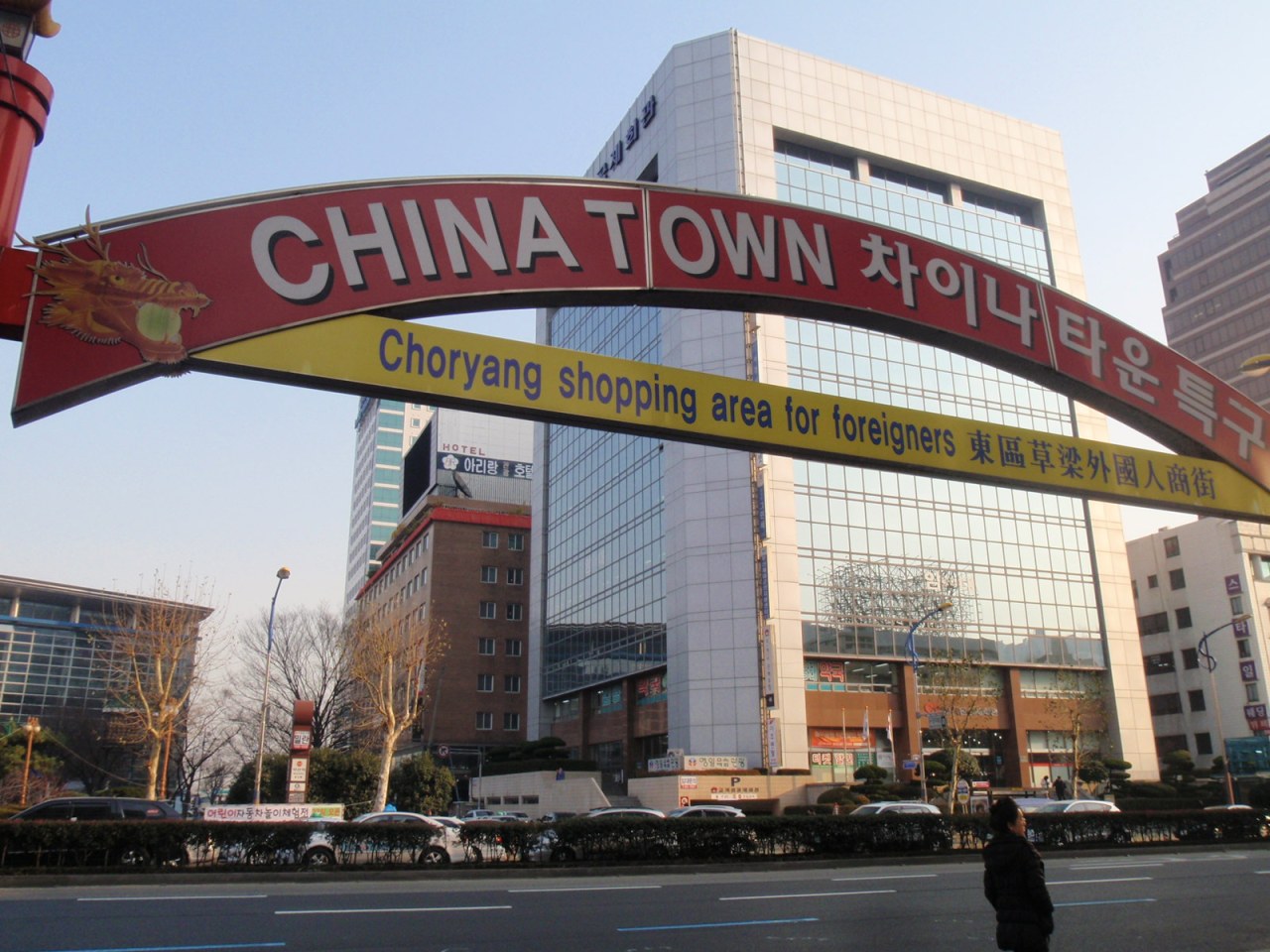 The area known as Texas Street lies parallel to Busan Station and has a rather seedy reputation due to its genesis red light district for US military based in Busan. With the US base in Busan now closed, Russian sailors have taken their place so rest assured, the booze and ‘bar girls’ still flow freely.  However, this area also serves as a commercial district for local residents from not only Russia, but also the Philippines, and Uzbekistan, who have established a number of shops and authentic restaurants in this small stretch of very non-Korean feeling Busan!

After a veritable binge of discount shopping, discount vodka (bokda/wodka depending on where you’re from), discount massages and discount hoors, one must eat – and what better place to try something new than a local Uzbeki restaurant. 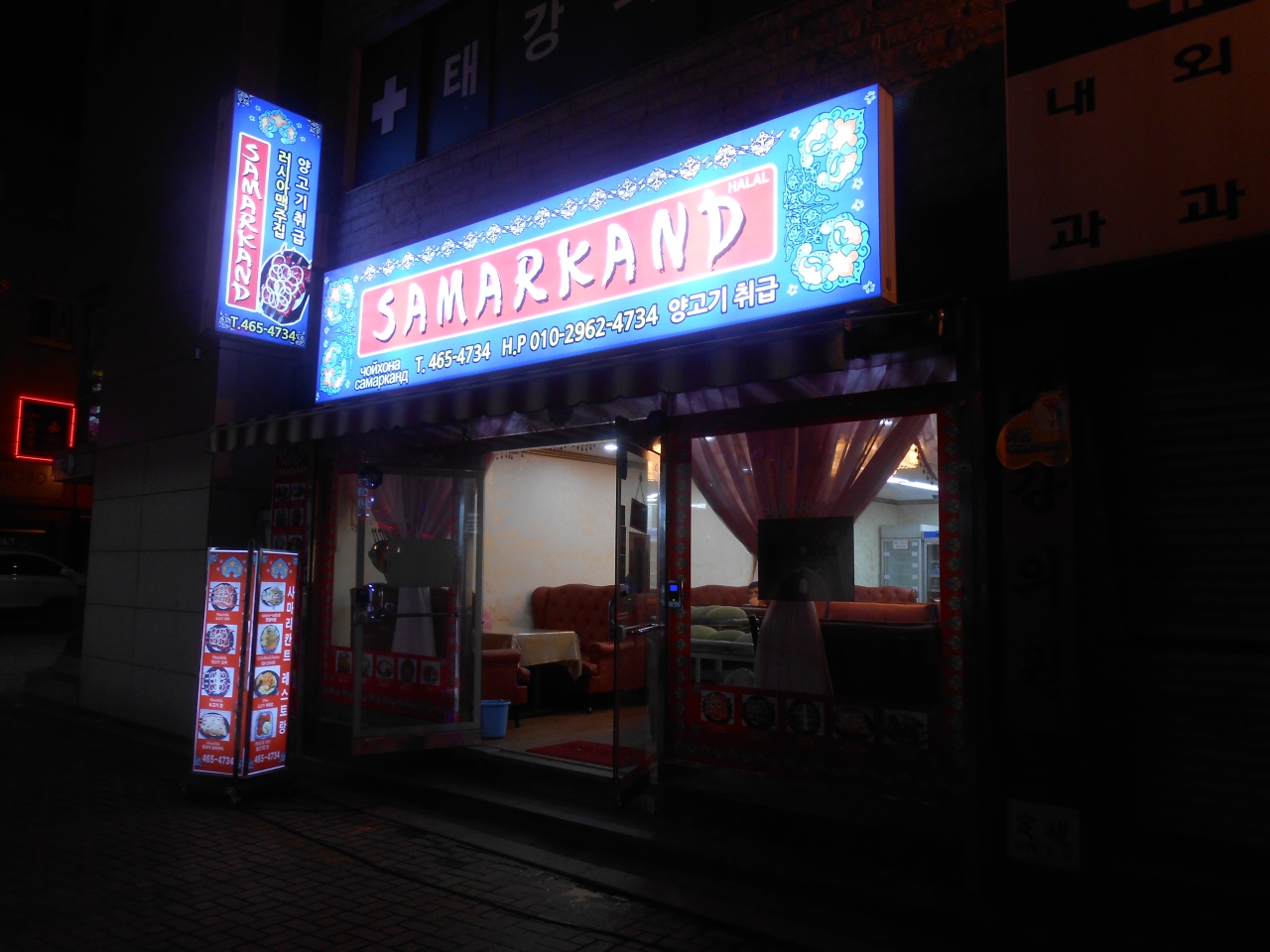 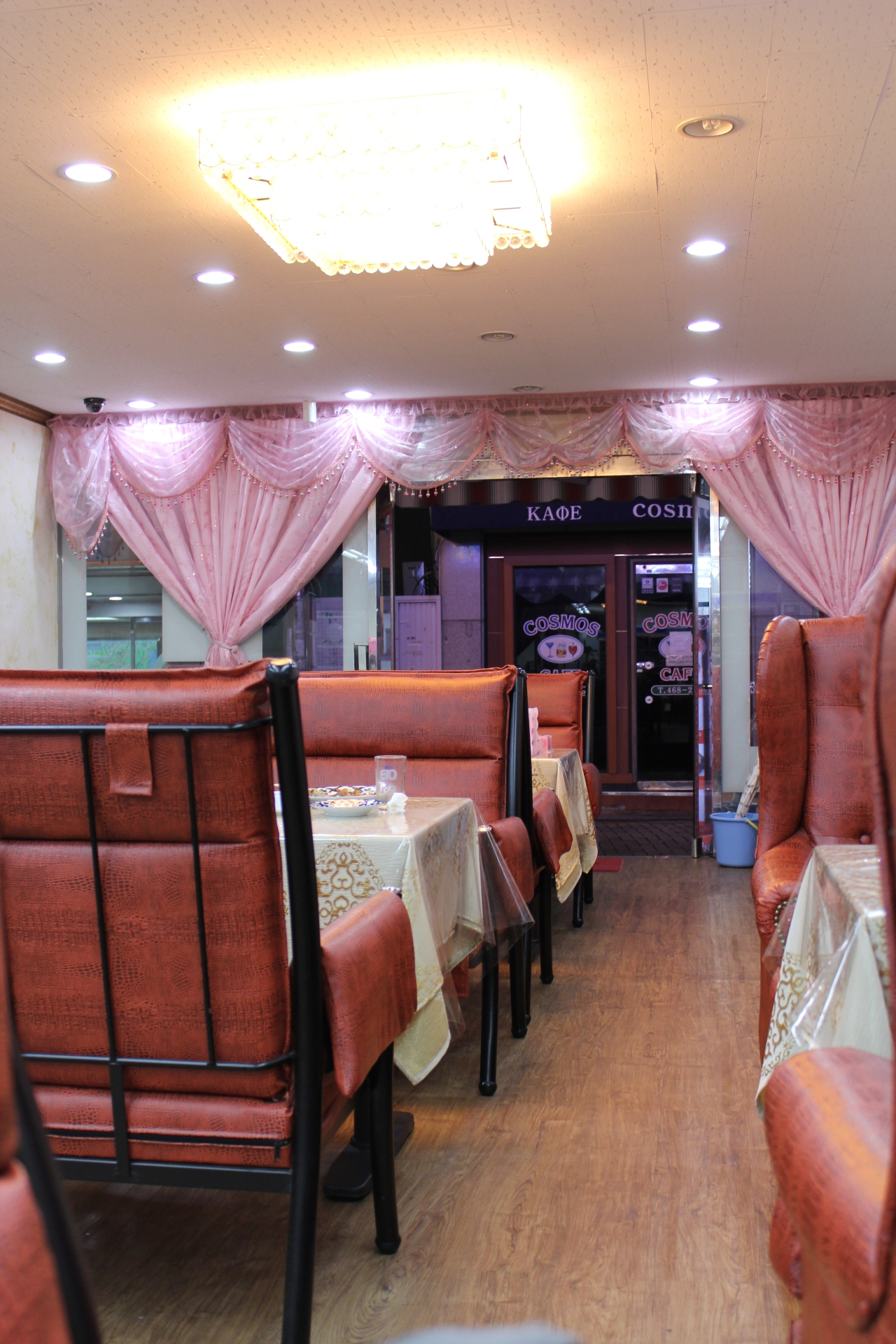 Beers are ordered by number which we have subsequently discovered may have something to do with strength?  We randomly ordered a number 7 and a number 3.  Both were cold, beer flavoured and not too bad.

Shurpa was a delicious soup consisting of flavoursome lamb chunks, chickpeas and floating veg.  Tearing of chunks of the sesame break and dunking in the soup was the perfect way to soak up the gorgeous, meaty juices. 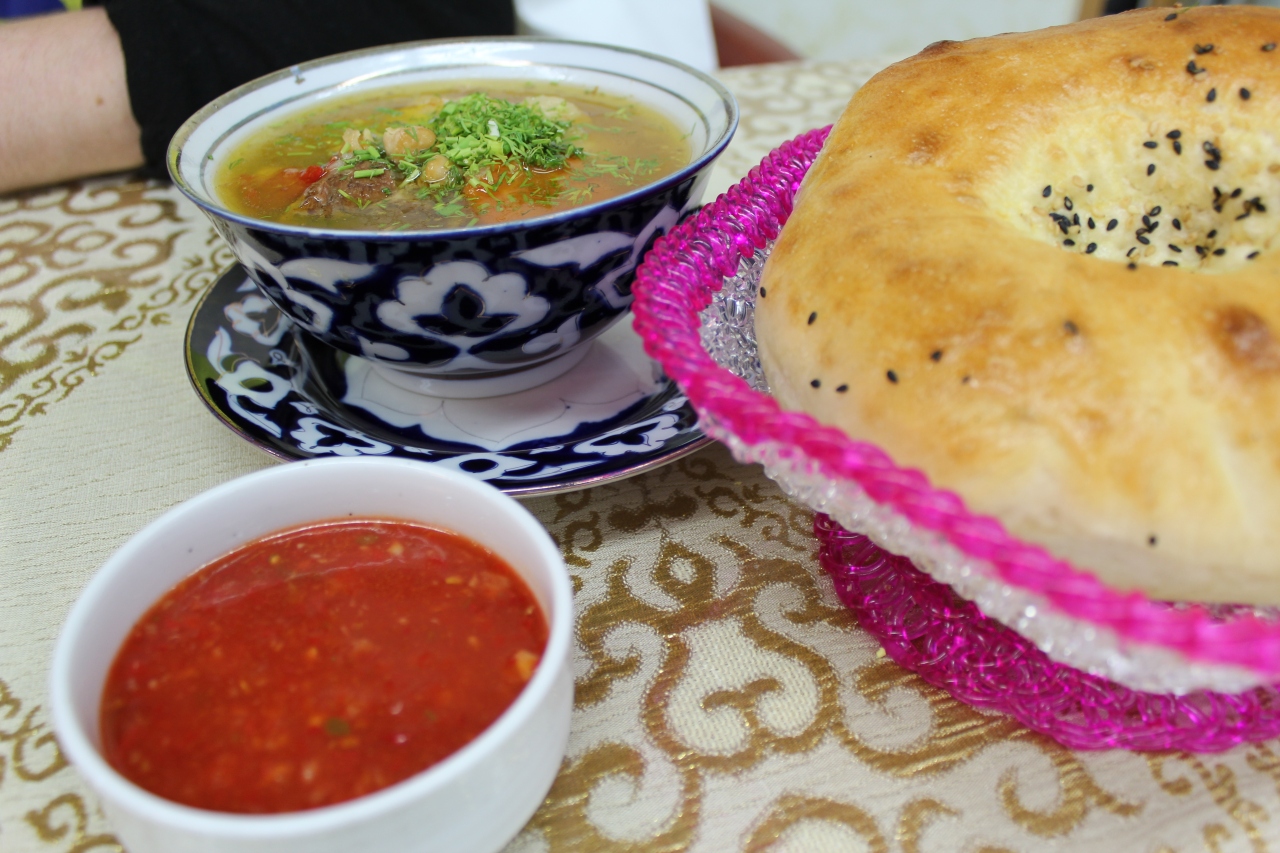 Being avid (read; frothing at the bit) fans of anything remotely resembling a pie, we ordered one and then another of the super delicious samsa – pastry pockets filled with super meaty mutton-y goodness.  Dollops of the fresh tomato sauce gave it a refreshing zing and cut through the slight greasiness.  So, so good.

Next, it was onto the shashlyk – the kebab style meat dish popular around the former Soviet world.  The meat was tender, juice and filling.  We chose the dish that provided us with one of each of the types on offer.  One was tomatoes (that’s not a meat!!!), one lamb, one chicken and mystery meat that was reminiscent of some variety of offal.

Moving away from our stomachs for a minute (well, kind of) its onto another must do if you’re in Busan, Fully Booked.  Set up by a couple of expats, Fully Booked is a second hand bookshop that allows you to trade in your old reads for store credit or a bit of pocket change.

Fully Booked has a full drinks menu, allowing you to peruse books or play one of their many boardgames in an extremely leisurely fashion.

Recently, they added paninis to their range.  The chicken, pesto and mozzarella is our favourite.  Big enough for two, they come crispy, piping hot, oozing with cheese and accompanied by sweet little dishes of pickles and peppers.

Hungry again?  Recently we happened upon a tiny little nook of Mexican goodness tucked a couple of streets back from Haeundae.  Not holding up much hope for the authenticity of Mexican food in Korea, we were blown away by its freshness and tastiness.

Avocados are somewhat of a hard-to-find treat for us in the village so an order of guacamole was a must.  Mashed and constructed to order, it doesn’t get fresher than this! 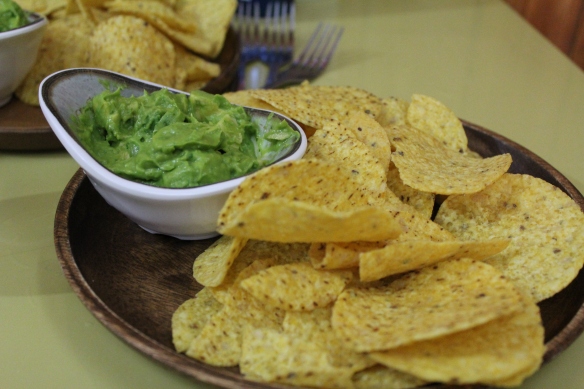 The taco el pollo is H-J’s favourite – soft tacos covered with a generous pile of seasoned chicken, refried beans, olives, cheese, onions and coriander.  Almost TOO loaded, the corn tortillas struggle to maintain their integrity when you pick them up – all the more incentive to stuff them in your face quickly.  Delish! 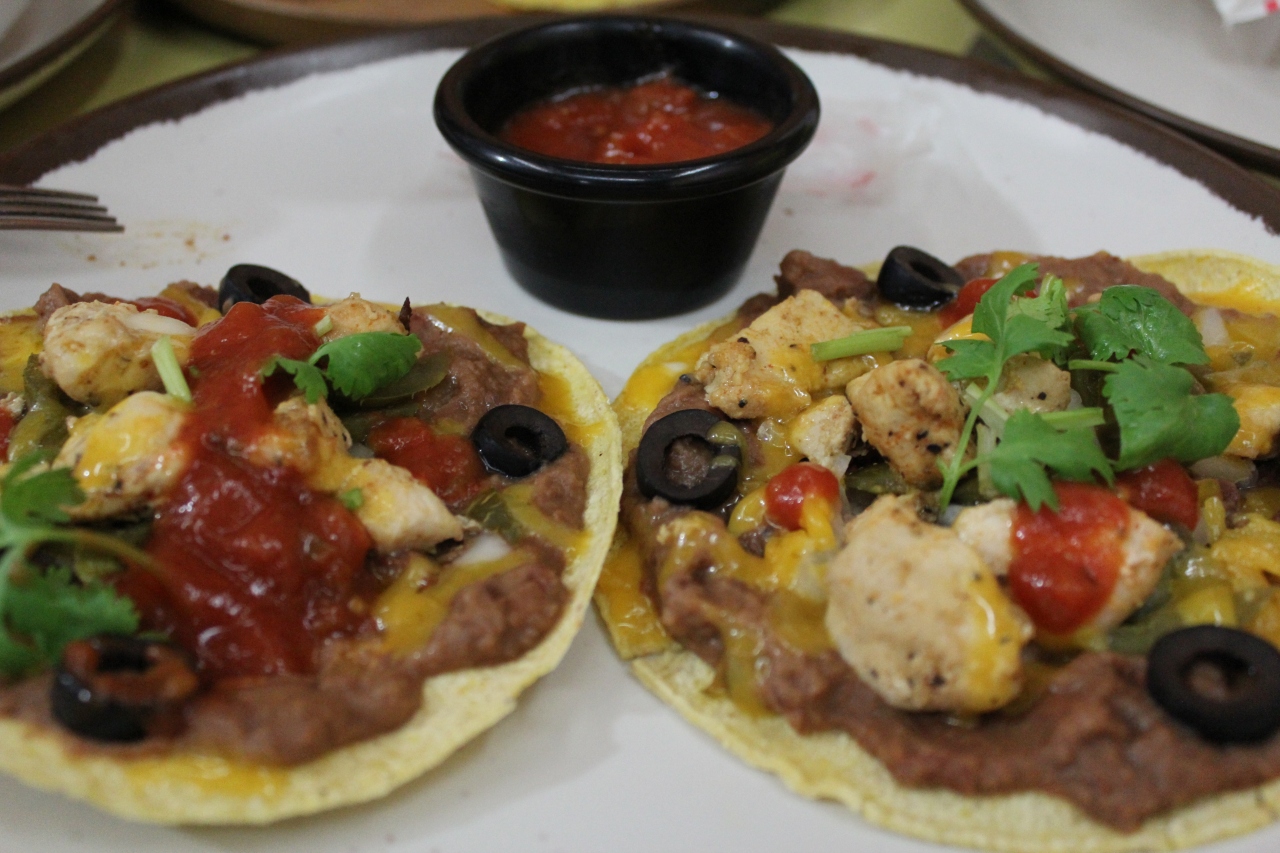 Dan’s fave is the burrito which comes heaving with rice, salad, cheese, and meat of your choice.  Filling and tasty!

One of our most memorable moments in Busan was here one night when we were quietly eating our dinner before getting the train back to the village. While our senses were  primarily focused on taste we noticed some familiar music being played in the restaurant – The Dudes??? A Kiwi band being played in a restaurant in South Korea? What were the chances?! Enjoying the food and now the music, we were stoked when the playlist then played a track by Herbs, another epic Kiwi group. We told the chef that we liked the music and she replied “New Zealand music, very good!”. Wow!!!! After another round of quesadillas, some King Kapisi and the Decepitkonz…damn! Stop, drop and roll…We fell 100% in love with place!

And while we’re on the subject of things that remind us of home, it seems a good place to drop the final instalment of our B Sides of Busan – surfing at Songjeong beach.  Now while we’re not hardcore surfers by any stretch of the imagination  we have grown up with enough swell and gorgeous coast line on some of New Zealand’s best breaks to be, well, snobs about waves.   Recognising the beauty of the teeny little waves here as a great place to practice, and perhaps show up some of the Koreans who clearly have never seen a decent wave before, it was off to the awesome local surf shop to rent some boards and attack the surf.  It became a bit of a fixture for us over the summer and if you are in the market for a good beach in which to start your surfing career, check it out.  If you can get past the beach police, that is! 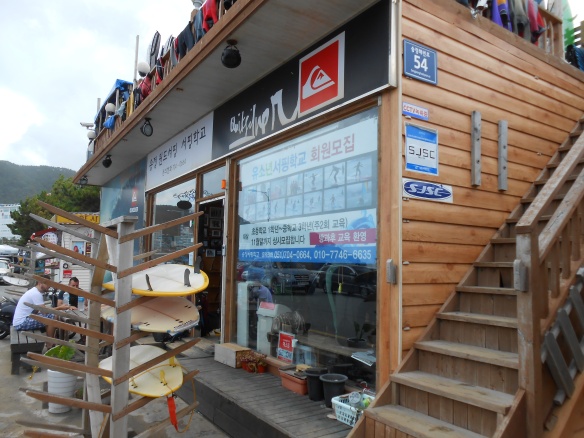 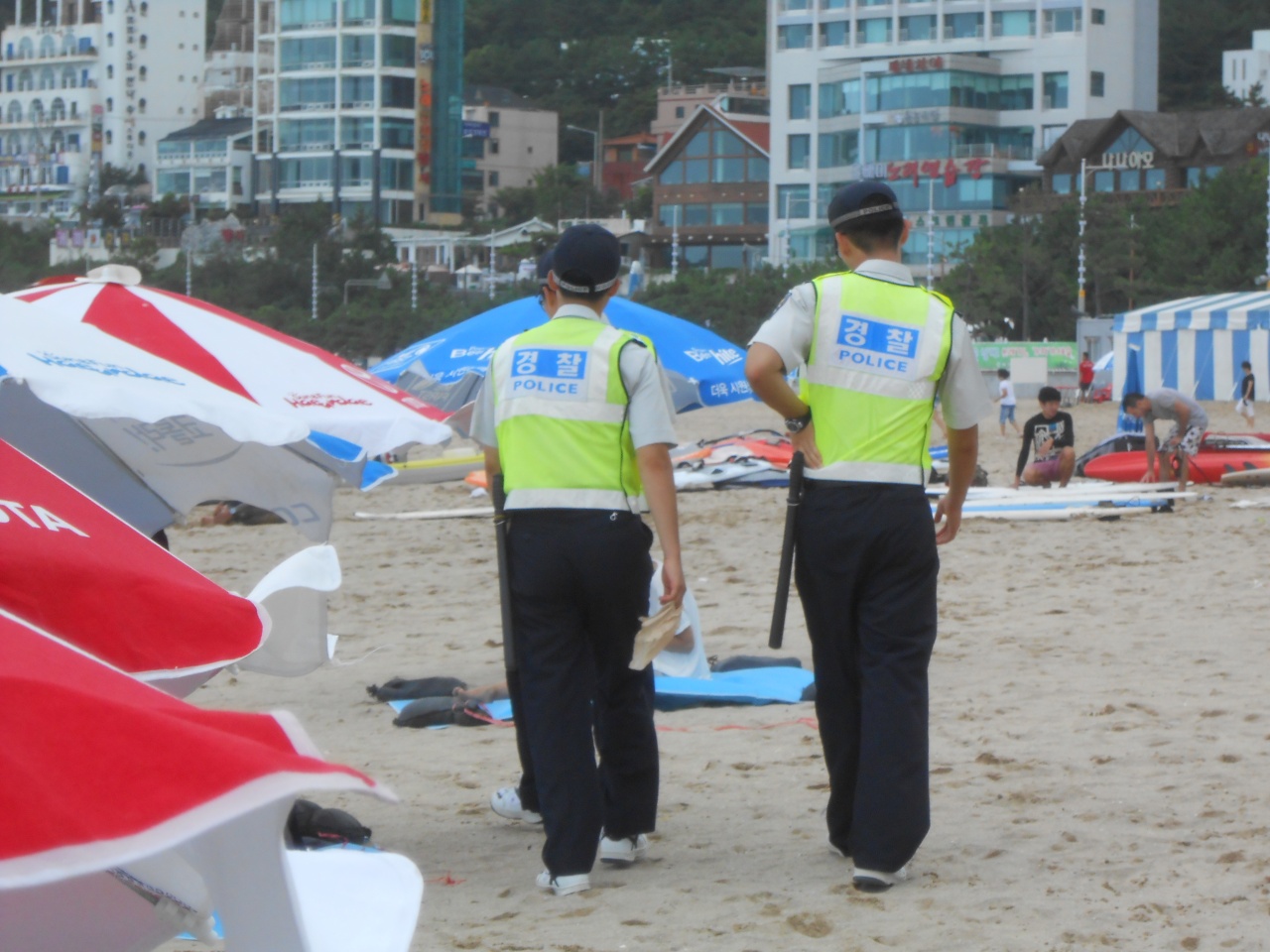 All in all the coast lines of Busan and the city itself are pretty great places to lose some hours, discover some hidden treasure and find yourself an adventure.  Busan, its been a blast… 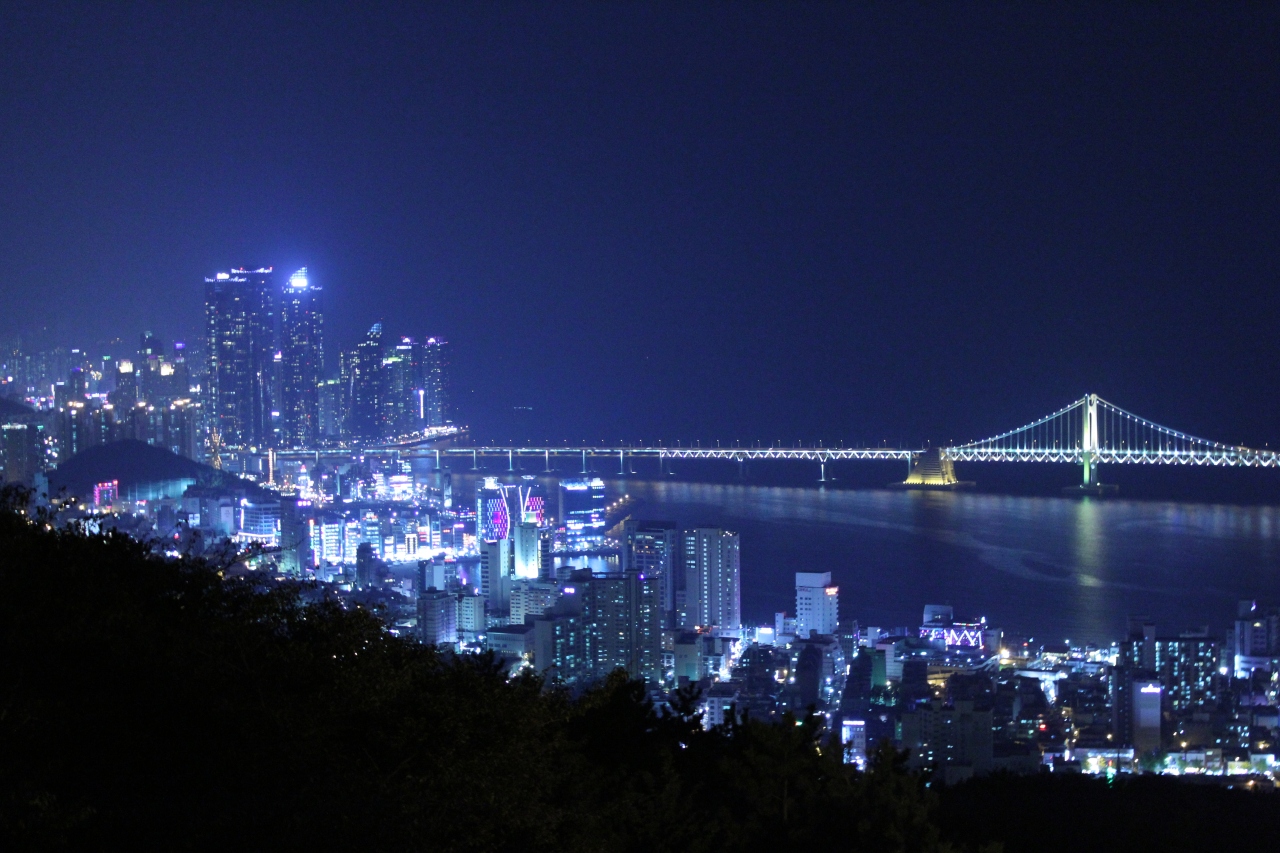