As the end of our time in Korea draws nigh, we are of course feeling the drive to go and tick off all those final ‘to-do’ things, see those final ‘must see’ places and, perhaps most importantly, eat those final ‘must eat’ foods.  A few of them we have tried before, but we wanted another go cause it was just so darn delicious or we needed better photos.  A couple we had yet to try and it seemed wrong to leave Korea without experiencing them.  These dishes are fascinating to our beady Kiwi eyes and extremely, well, Korean, so it seemed remiss to leave them un-blogged about.  We have thus far blogged about the more casual, fast-food options (both Korean and otherwise), the glut of fried chicken restaurants (and incredible delivery options) and have even attempted our own Korean style home cooking.  But there was a gap in our reporting – the meals that are more of a commitment, a sit down affair to be enjoyed over a number of hours with friends and family.

Without further adieu we present you to the waterfallsandcaribous Guide to Must Do Korean Feasts.

Perhaps the first and most famous meal you will come across in Korea is bulgogi 불고기.  Literally meaning “fire meat” it refers to the Korean style of barbecue that you will find absolutely everywhere in Korea.  At most restaurants of this type, you will be presented with a bowl of raw meat, various sides dishes and you will then grill the meat at a charcoal or gas cooker in the middle of your table.  It comes in different forms – bulgogi tending to mean thin slices of beef (marinades can vary regionally), galbi 갈비 which is beef short rib, or the non-marinated cuts like chadol baki 차돌박이, which is thinly sliced brisket.  Here, we are dining on galbisal 갈비살 which is beef short rib without the bone.

To eat, either plunge it into one of the various sauces on your table and straight into your mouth, or wrap it up ssam 쌈 style in lettuce with a blob of sauce and whatever else you fancy and then eat.  Note, make your little package small cause its meant to be popped in your mouth in one bite! 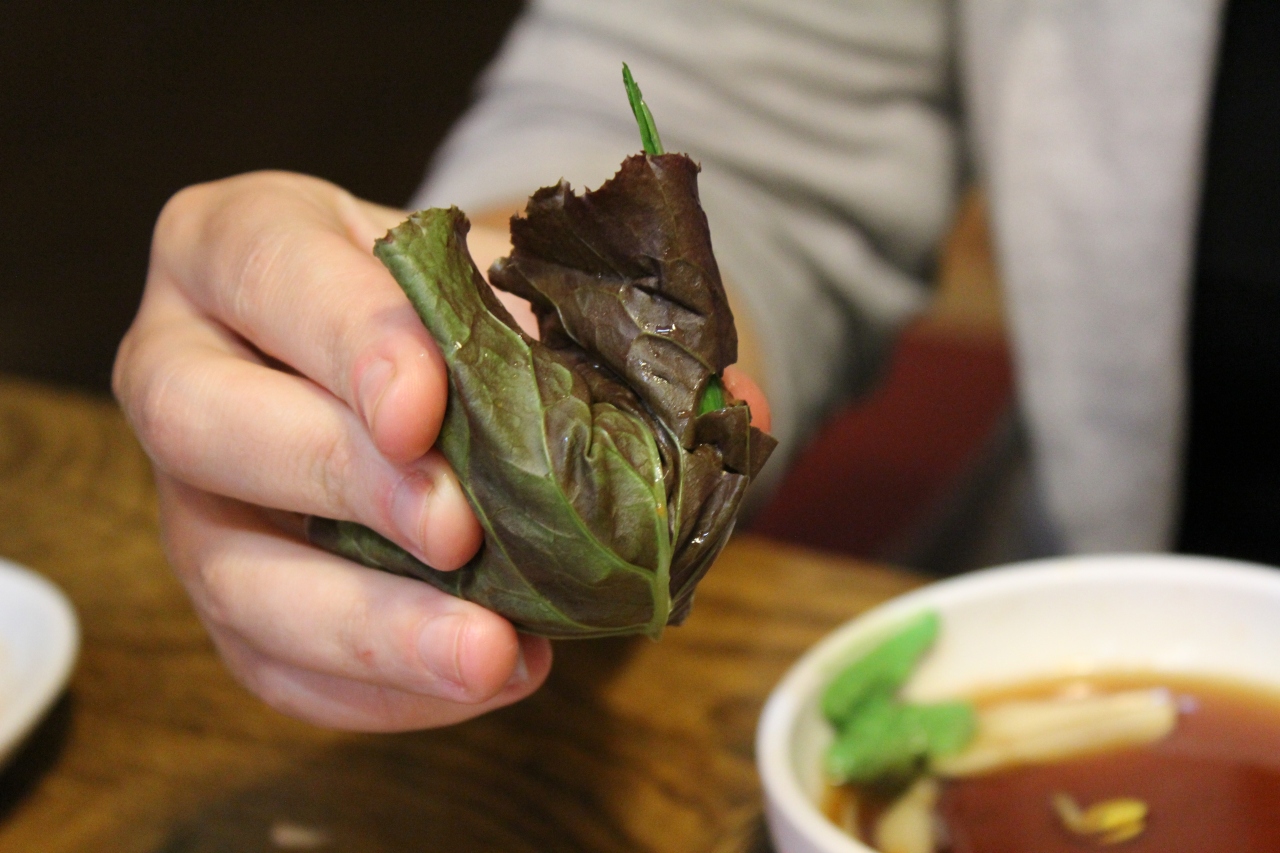 And that’s just the beef!  Ask a Korean what their favourite food is and chances are that they may say samgyeopsal 삼겹살, a thick unsalted pork cut, taken from the belly.  Pork can also be ordered in a spicy sauce, dweiji bulgogi 돼지불고기, or jumulleok 주물럭, a short steak marinated in sesame oil.  Yum.  Our favourite?  Ogeopsal 오겹살 which instead of having three layers like the samgyeopsal has five.  This particular one is also marinated in something (?) and has some pretty little herby leaves on it.  Delish.

How about chicken?  Fair question in light of how often we have ranted about chicken in all its wild and wonderful incarnations in Korea.  Dak galbi 닭갈비 fills the niche here – a wonderfully (generally) spicy stir fry type creation, again cooked in the middle of your table. 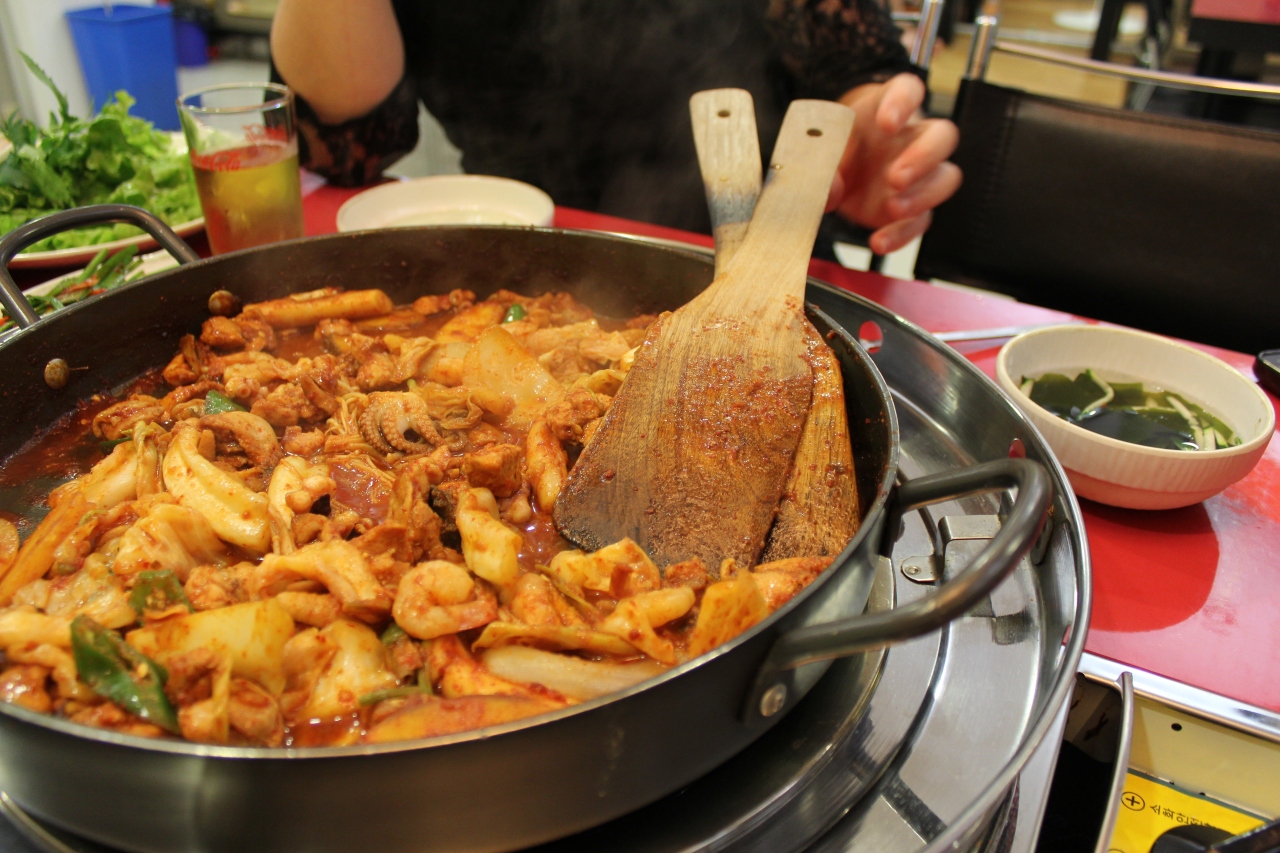 You can find many bits and pieces floating around in your dakgalbi – this particularly one also had delicious plump shrimp and octopus hanging out. 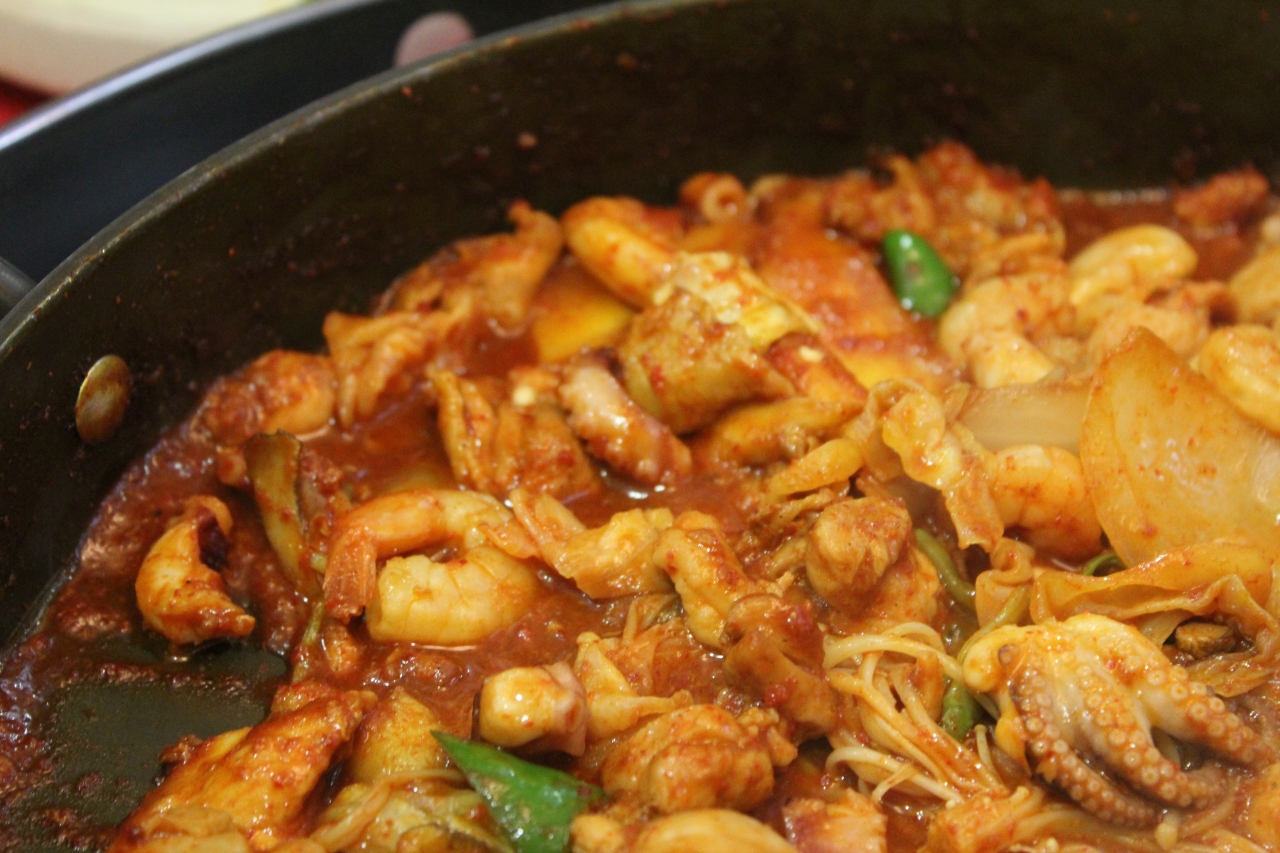 Oh, and some tteok 떡, those strange little pieces of glutinous rice cake that pop up all over the show.

One of the best parts of meals like this is the multi-part event that it becomes.  When you’re done with the majority of your meat, simply ask for some rice – it will be tipped into the remaining slop and tossed around to soak up all the bits and pieces!  The rice takes on a delicious crunchy bottom too.  Its the perfect way to make the most of every last drop of goodness. 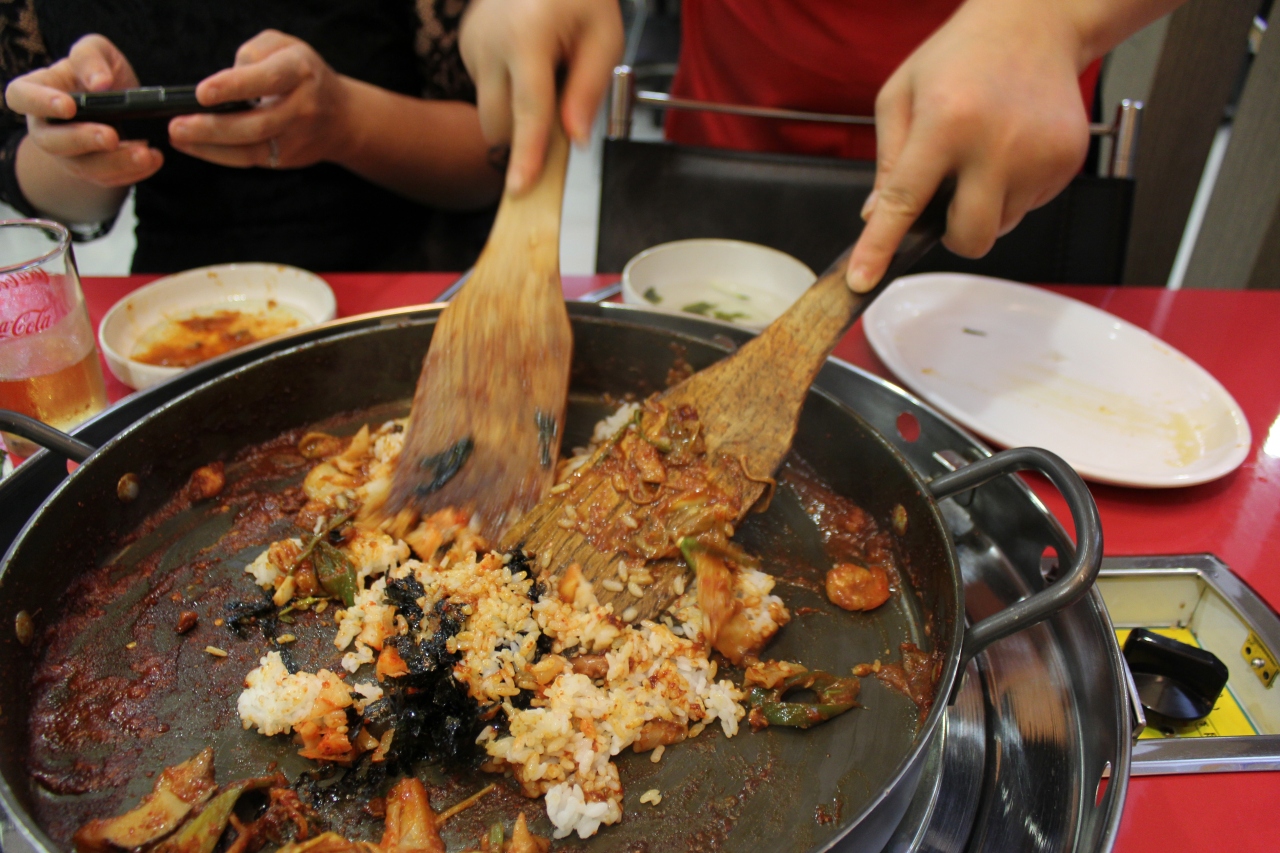 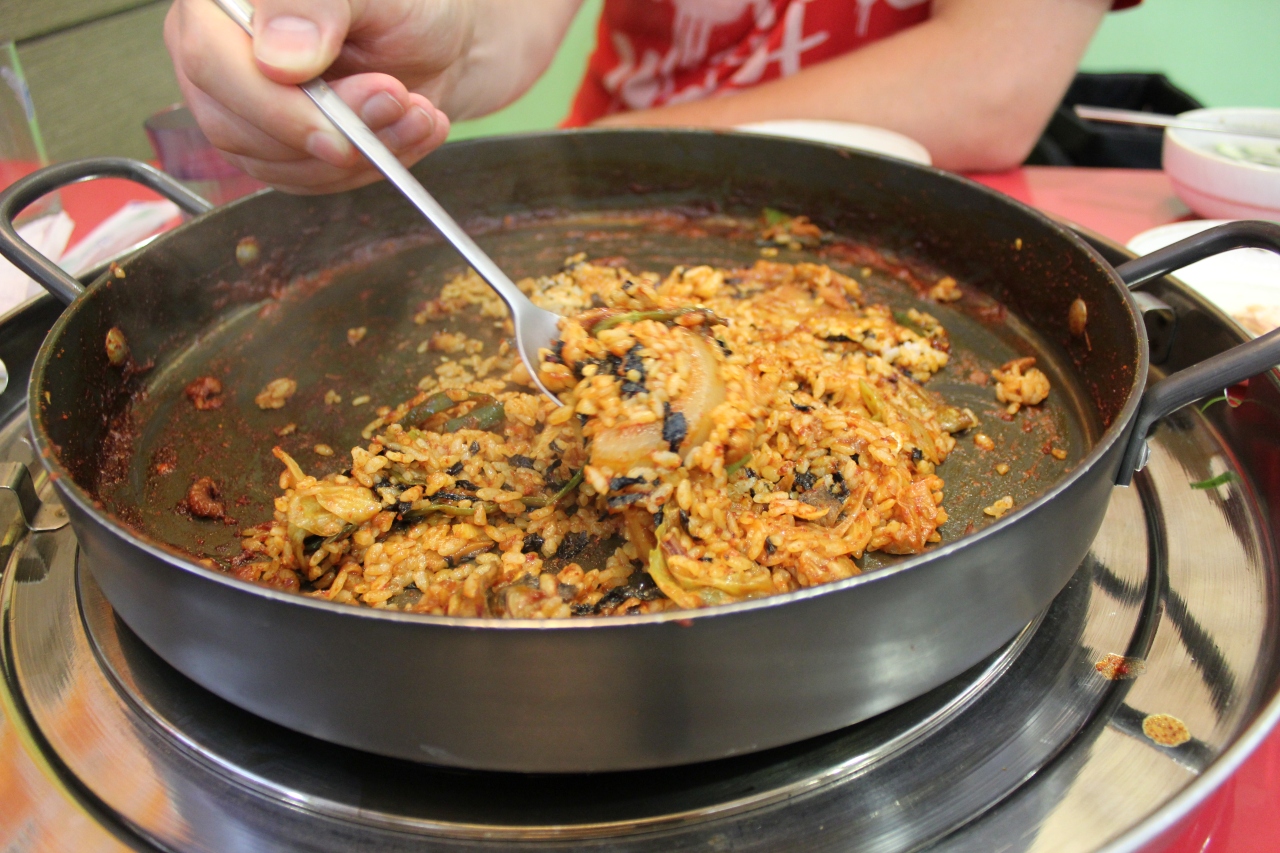 You’ll find duck available for the same type of cooking style too.  Its freakin’ delicious and a stir-fry of noodles to soak up the duck-y juices at the end are highly recommended.

Stepping away from the cook-your-own feast types of eating, there are a number other awesome meals that we totally recommend trying.  There is a plethora of raw fish 물회 restaurants in Korea that serve up tasty variations of fresh fish.  Generally the fish is so fresh that its still swimming in the tanks that line the outside of the shop!

There are a few different choices of how you consume your raw fish. You can have it sliced thinly, sashimi style to be rolled up ssam style, in lettuce with various sides.  You can find it served alongside various other sea creatures floating in stews.  Our favourite to date though was something we accidentally ordered when we simply asked for “raw fish” at our local purveyor.  What arrived was a bowl filled with bright red goop, atop which was a delicate pile of translucent raw fish.

Upon further investigation (i.e. putting it in our gobs!) a taste sensation was revealed.  The bowl was a sophisticated blend of balanced flavours – a sweetness from julienned Korean pears, spice from the omnipresent gochujang (Korean hot pepper paste), lush richness from sesame oil and a cold sharp refreshment from the shaved ice upon which all the other ingredients were placed. 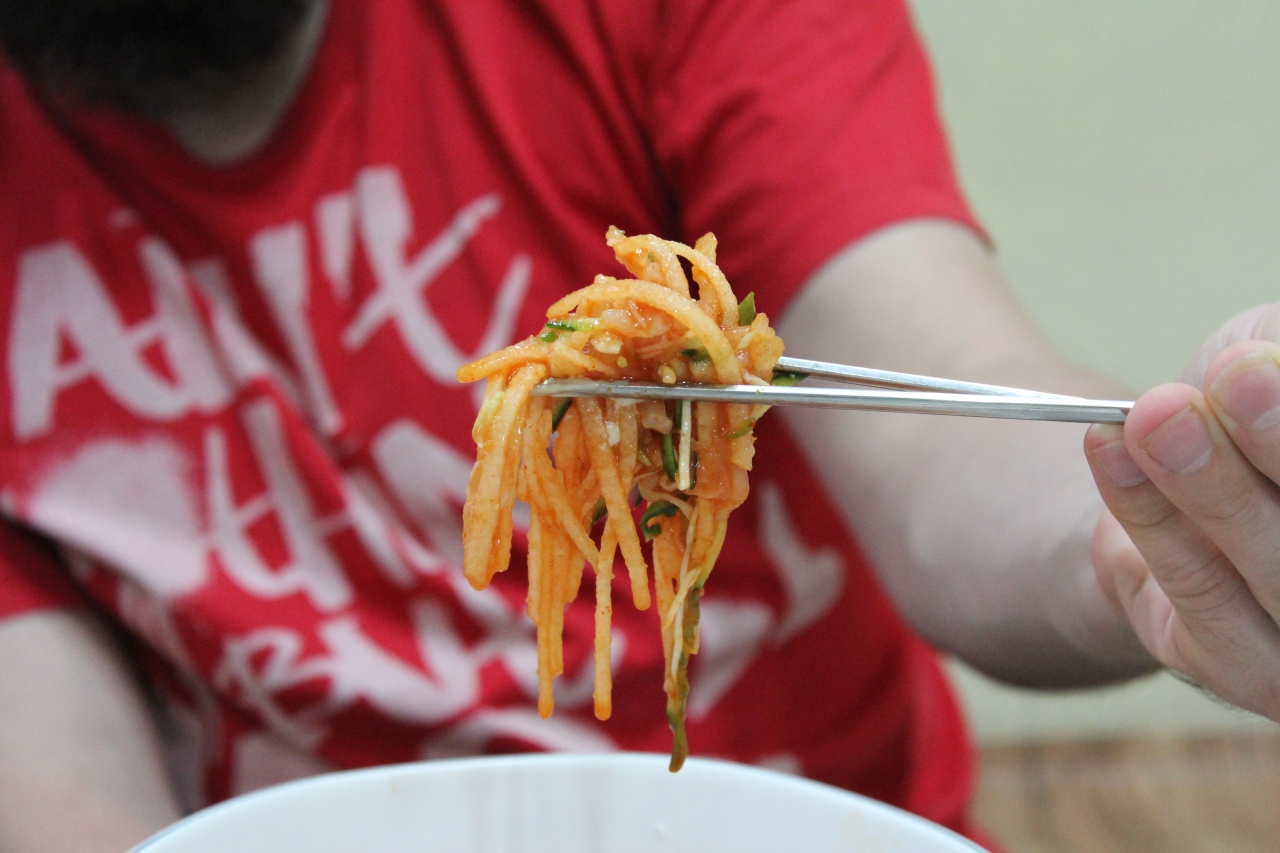 It worked perfectly with the gorgeous fish – for a pretty humble looking bowl, it packed an incredible surprise!  While cold raw fish soup may not be to everyone’s liking, its worth a try if you should have the chance.

Something that we’ve noticed crops up a lot around the streets of Korea is restaurants that specialise in jokbal 족발 which means…pig trotters!  Not the first part of the pig that most of us would naturally tend towards, these places are so common here that we were intrigued to say the least.  And it just so happened that the universe was practically ORDERING us to try it…check out the name of the trotter restaurant that just happens to be 200 metres from our house:

Wicked.  H-J has a restaurant named after her.  We, of course, chose this as our place to investigate the Pig Trotter Phenomenon.

The menu at this type of establishment basically offers a few variations – steamed trotters served ssam style, trotters in spicy sauce, cold steamed trotters with noodles, or in a pork spine & pork bone soup.  Spicy pork trotters was the dish that screamed out to us.  So in we went!

Trotters, it turns out, are rather delicious!  Very pork-y (funny that!) with a somewhat gelatinous texture, but enjoyable nonetheless.  They are also quite messy and fun to eat.  We were even offered plastic disposable gloves should we wish to make total uncouth messes of ourselves.  Which, of course, we did!

One of the side dishes was a further porky treat – thin slices of cold trotter floating in a piquant cold broth.  Quite delicious! 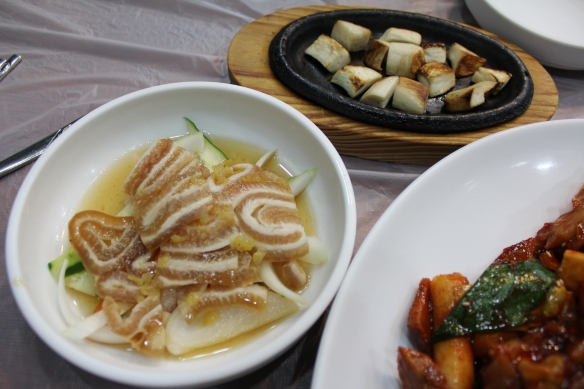 We gotta say, we rate trotters!

Throughout this blog, you may have noticed that every meal seems to have a wild array of extra little bowls and plates with tempting little morsels.  Known as banchan 반찬, these small treats are served alongside every meal in Korea – be it a royal banquet or your local cheap and cheerful.  Included in the price of whatever you order, they are also refilled pretty continuously throughout your dining.  Koreans LOVE to dine and often take hours to do so, switching back and forth between all the different dishes.  Its a pretty awesome way to eat.

Every meal will have gochujang.  It is added to everything and is quite delicious!  The gochujang here is also accompanied by soy sauce with a smear of tube wasabi, and some teeny little whitebait-esque fishy mush.

Often, there are garlic slivers to add extra garlic to the garlic already in your sauces, in your marinades and in all your other garlic dishes. 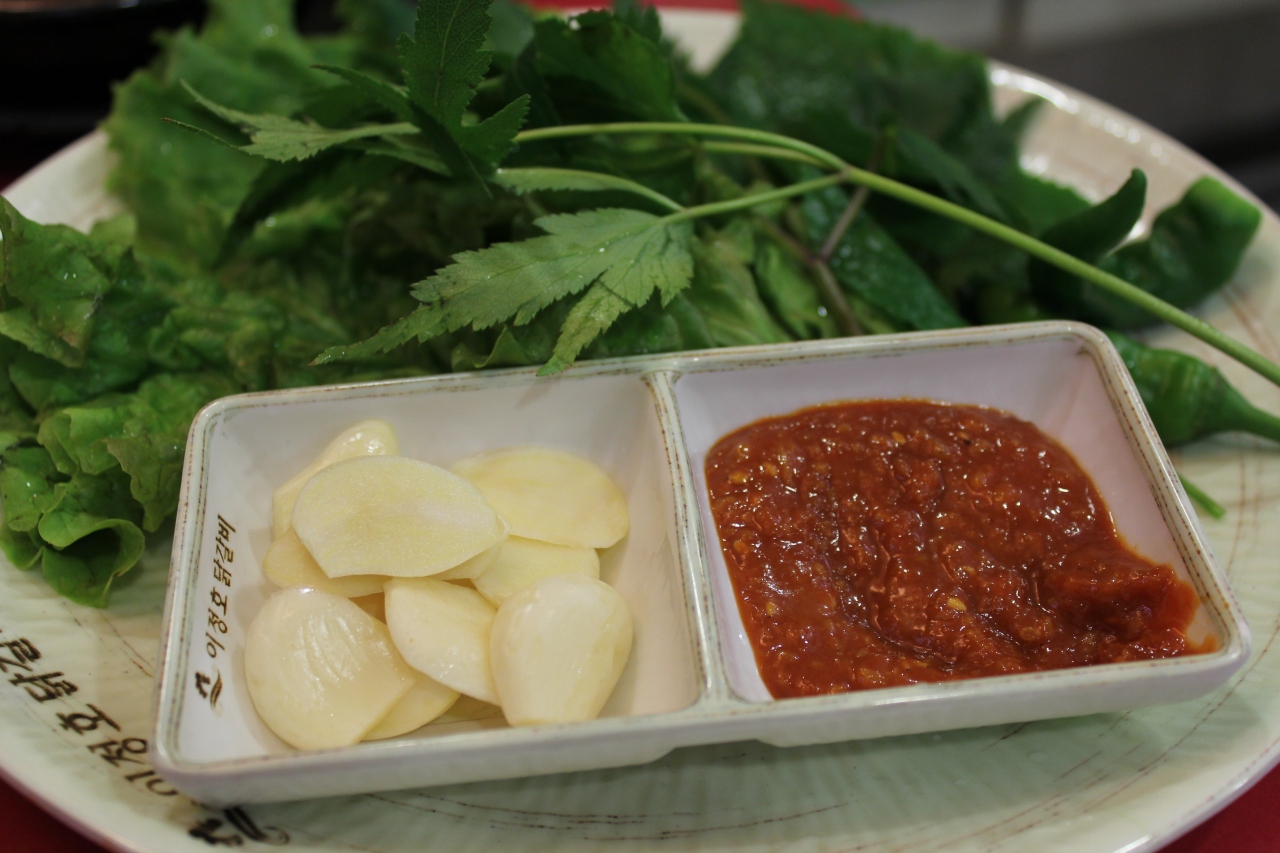 Jeon 전 is basically a Korean style savoury pancake.  This particular one is a kimchi jeon which is freakin’ delicious.

You’ll also find variations containing mung beans, seafood and, another one of our favourites, pajeon which is green onion.

Lurking in the background behind the pajeon is another awesome dish – japchae 잡채, Korean sweet potato noodles. Usually garnished with a few slivers of veg, sesame oil and sesame seeds, they can be eaten hot or cold and are really, really yummy!

Another item that crops up from time to time is dotorimuk 도토리묵, acorn jelly.  Due to its slippery nature, it’s incredibly difficult to pick up with chopsticks…but do persevere!  Or just scoop it up with a spoon.  Its worth it! 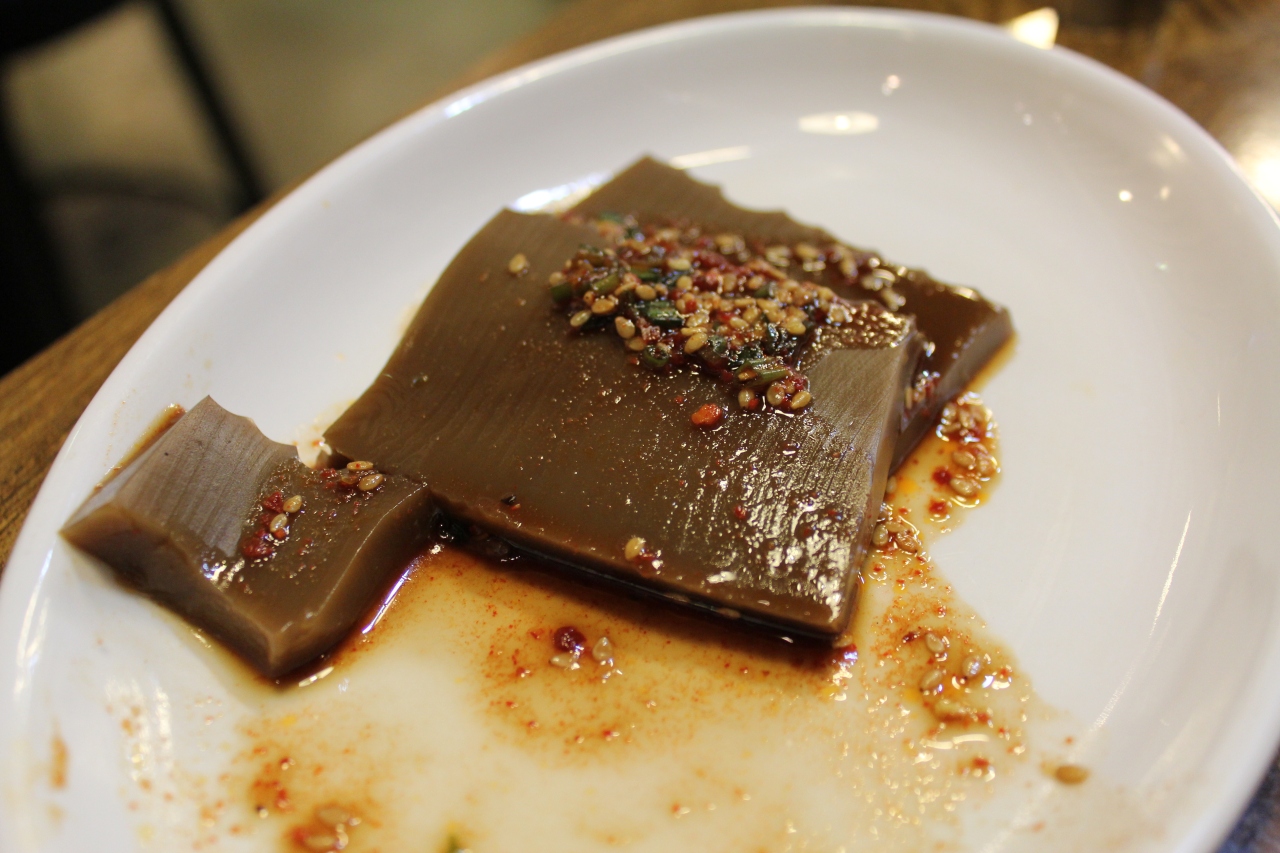 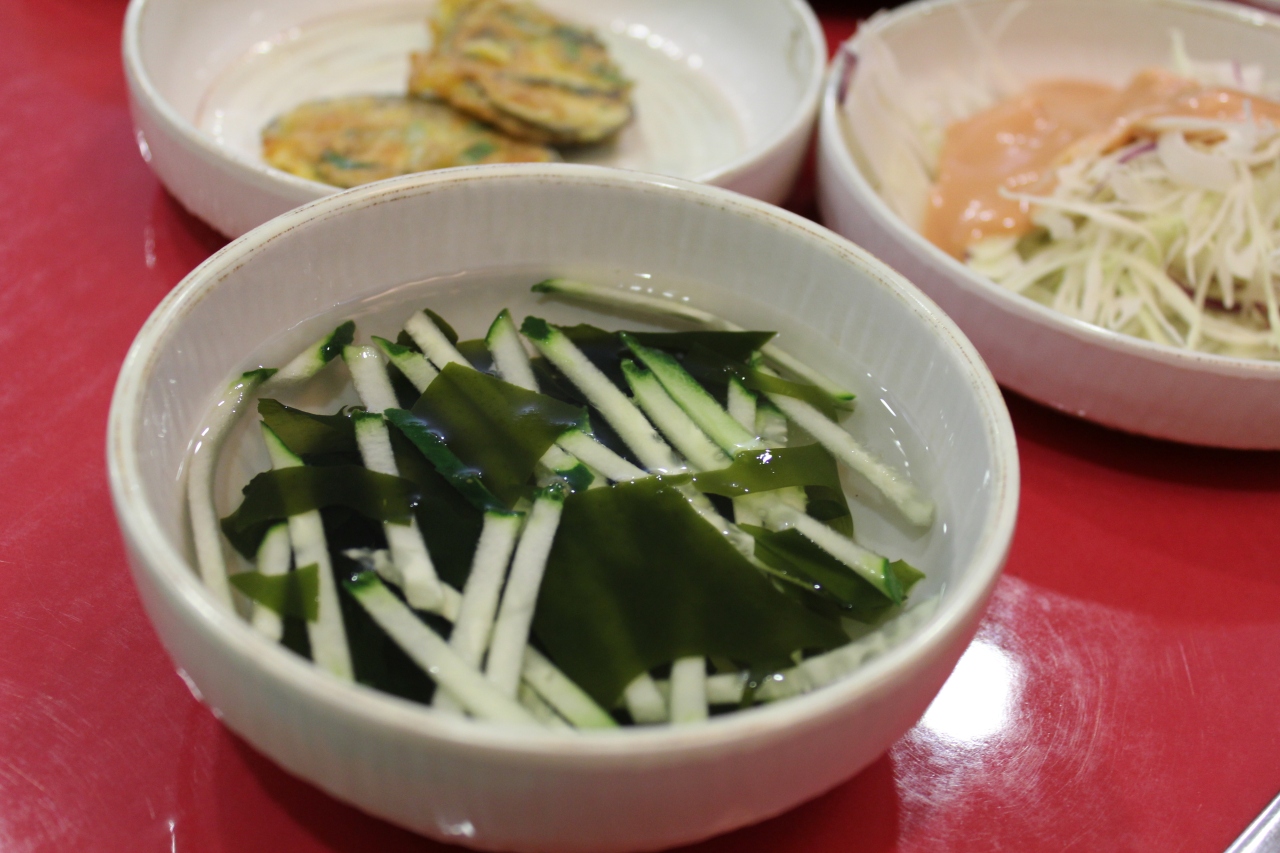 And what better place to end than with bap 밥.  Alongside kimchi, rice is the mainstay of nearly every, single meal in Korea.  Piping hot, you get your own little metal bowl of goodness to scoop or dunk into your soups as you go.  Unlike other parts of Asia, its eaten here with a spoon, not chopsticks and kept at table level. 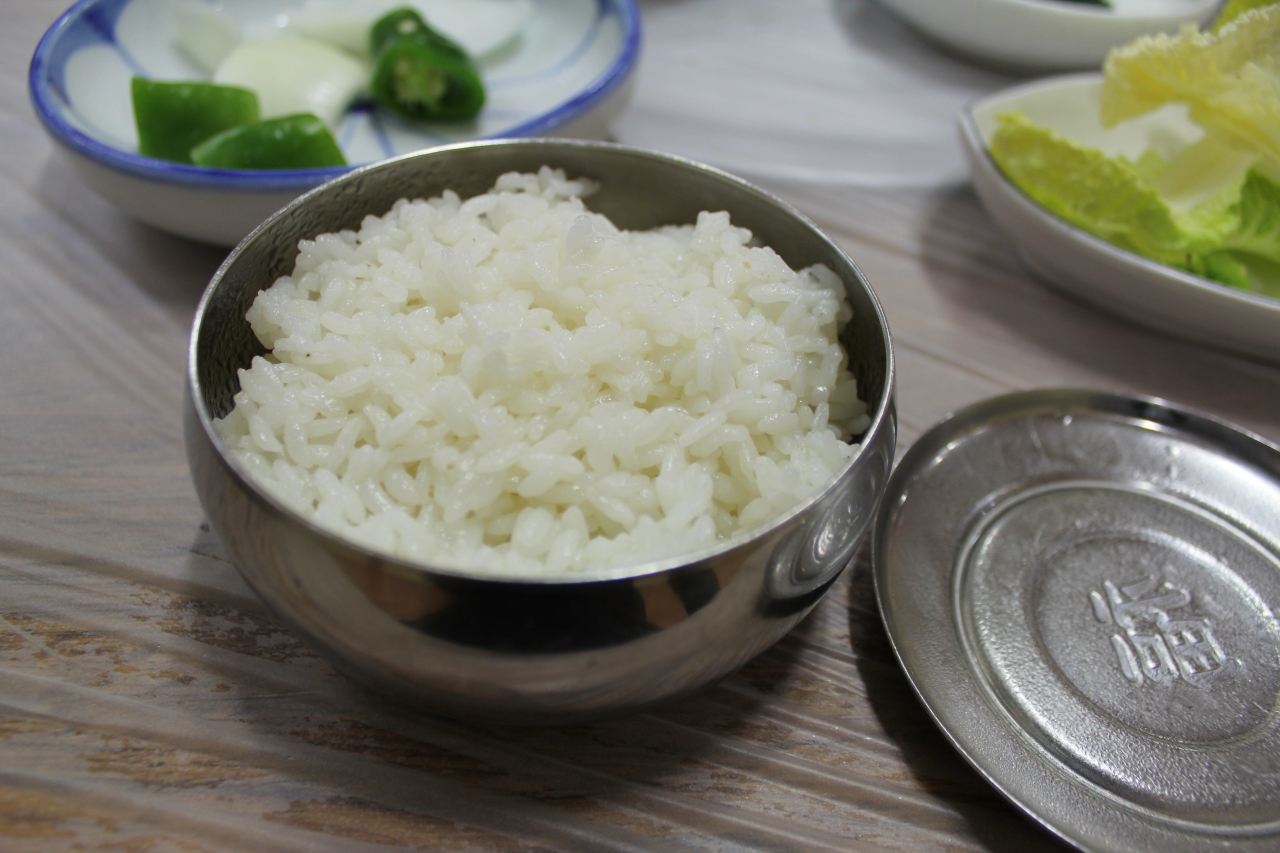 And that’s a wrap.  While we’ll no doubt discover many more delicious things to eat in our last couple of weeks in Korea, these are some of the meals that you can’t go wrong with.  Given the chance, grab these meaty feasts with both hands.