Number one stop in Gangwon-Do was Wonju to see our friend Bella who recently moved to Korea to work in a hagwon.  We were pretty excited to see a face from home, especially in light of our recent ‘friend’ related episodes in the village.  First things first though – to find accommodation for the night.  Note: if you are ever looking for somewhere to stay and want to give the amazing value and shiny gloss of a Love Motel a try, the best piece of advice we can offer is wait until night time.  When the neon is flashing it serves not only to direct you to area bursting with the most offerings (and therefore competitive pricing), it allows you to pick on random criteria such as Most Sparkly, Highest Neon or Best Array of Seizure Inducing Fairy Lights. This time round, we settled on a place with a name that left us gasping for more 😉

This one has a particularly gorgeous, old-fashioned tub. 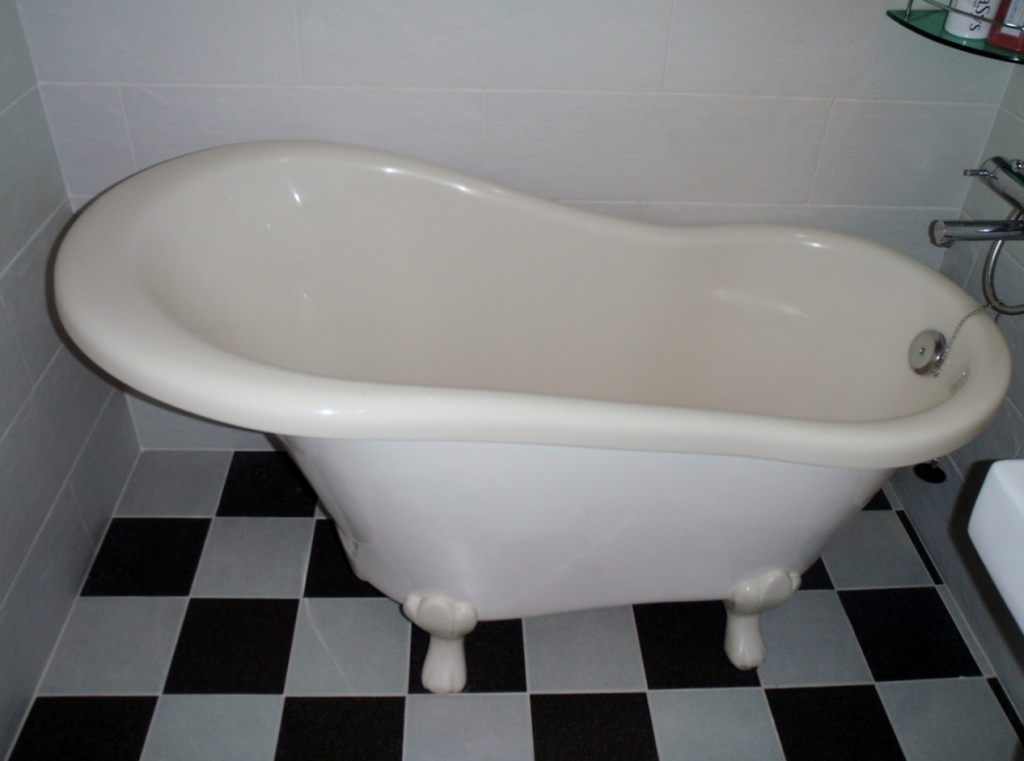 But more important pastimes than hanging out in our room beckoned – hanging out with Bella!  We headed to a bar and enjoyed an amazing evening of catching up, drinking beers, judging peoples’ outfits and generally just being ourselves in a group where everyone understood each other.  This is NOT something we take for granted coming from the village! 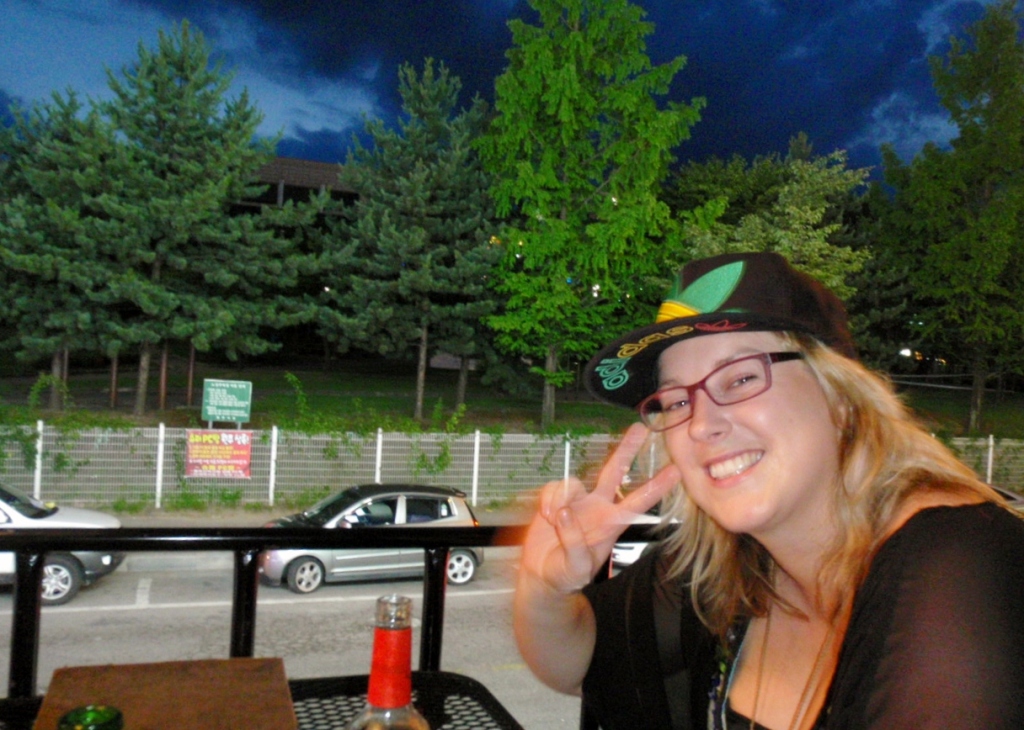 After a wonderful evening in Wonju, we made plans to see Bella down our way back in village toward the end of the week, and it was off towards the Gangwon coast for us.  During the bus ride to Gangneung, Dan stumbled upon an entry in Lonely Planet about a Seatrain which winds it way down the coast from Gangneung to Samcheok.  We were sold on this idea so stopped in Gangneung for as long as it took for the lovely woman at the information centre to score us the last two seats on the Seatrain.  And just like that we were off again.

The carriages are renovated so that you can peer out at the passing scenery.  Being the height of the summer vacation period in Korea, the train was packed so we were totally stoked to have made it onboard.

It rolled through more of that gorgeous, green landscape we’d come to expect in the Korean countryside.

And there were also sombre reminders of a country with a history of having to protect its shores from invaders.  The threat of war is never particularly far from sight in South Korea, even today.

A quick stop mid-way through the journey allowed all the passengers to jump off and take a few snaps beside the lovely winding coastline. 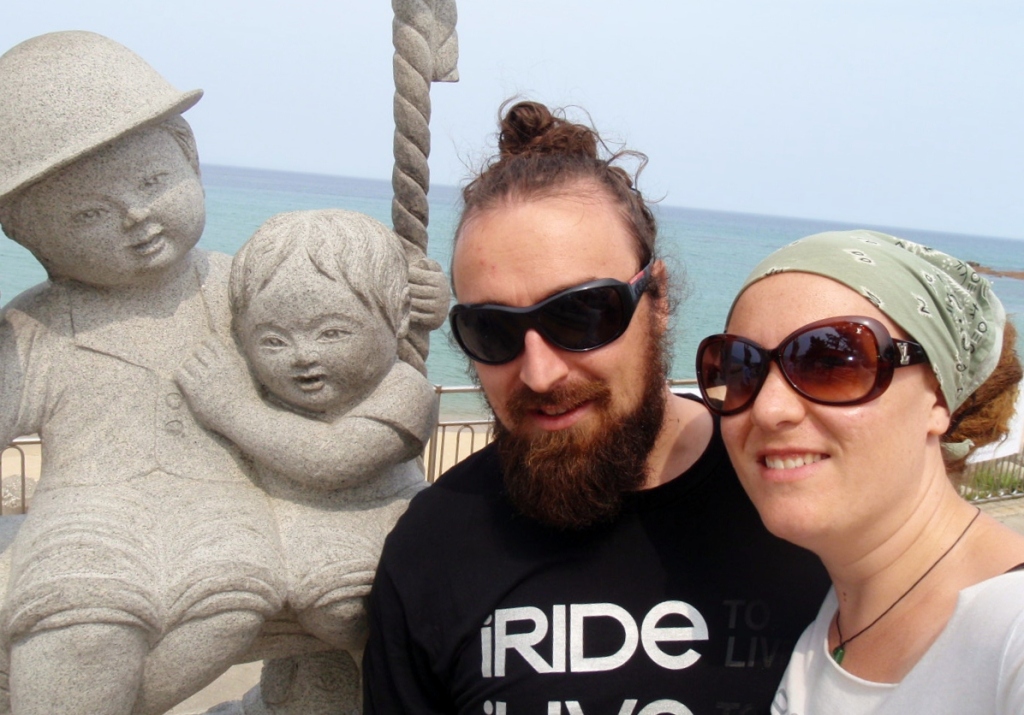 Never one to pass up the chance for an ice-cream, Dan went off in search of the train cafe and made friends with the staff.  Being the only two foreigners on the train, and mentioning that it was just on our one year wedding anniversary, we recieved the star treatment for sure!  We were presented with our very own Seatrain Coffee Mugs which have taken our morning coffee to a whole new level. 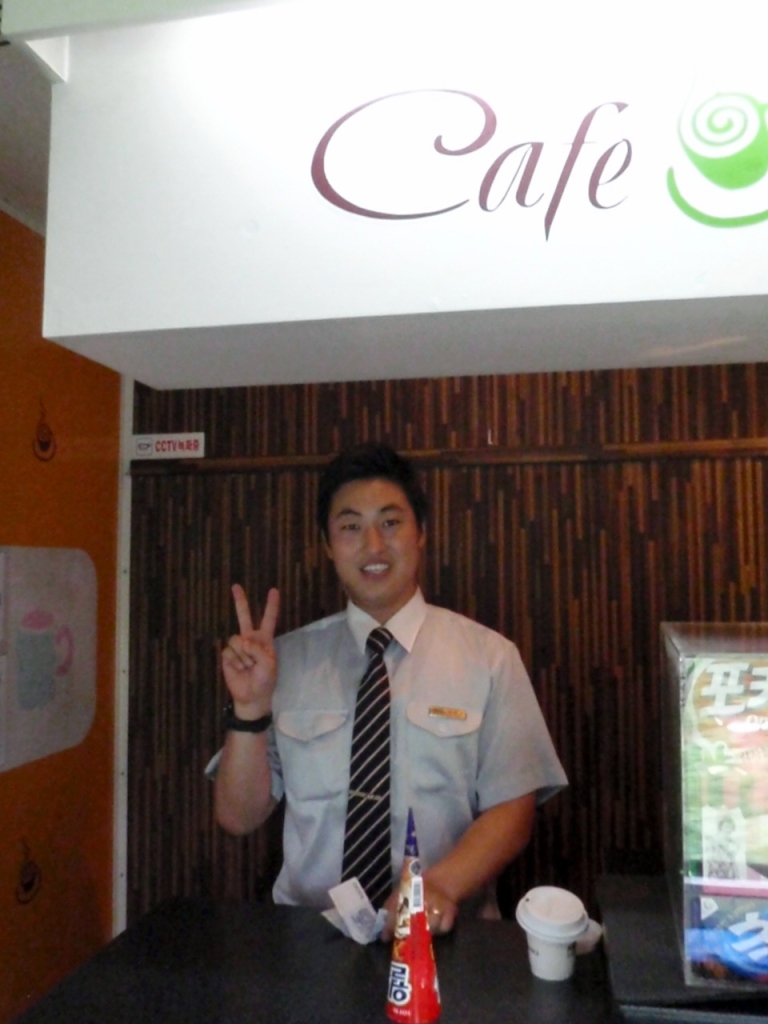 The coast that lines Gangwon-do is exceedingly pretty and, best of all, largely unsullied by large crowds of over-clothed people. 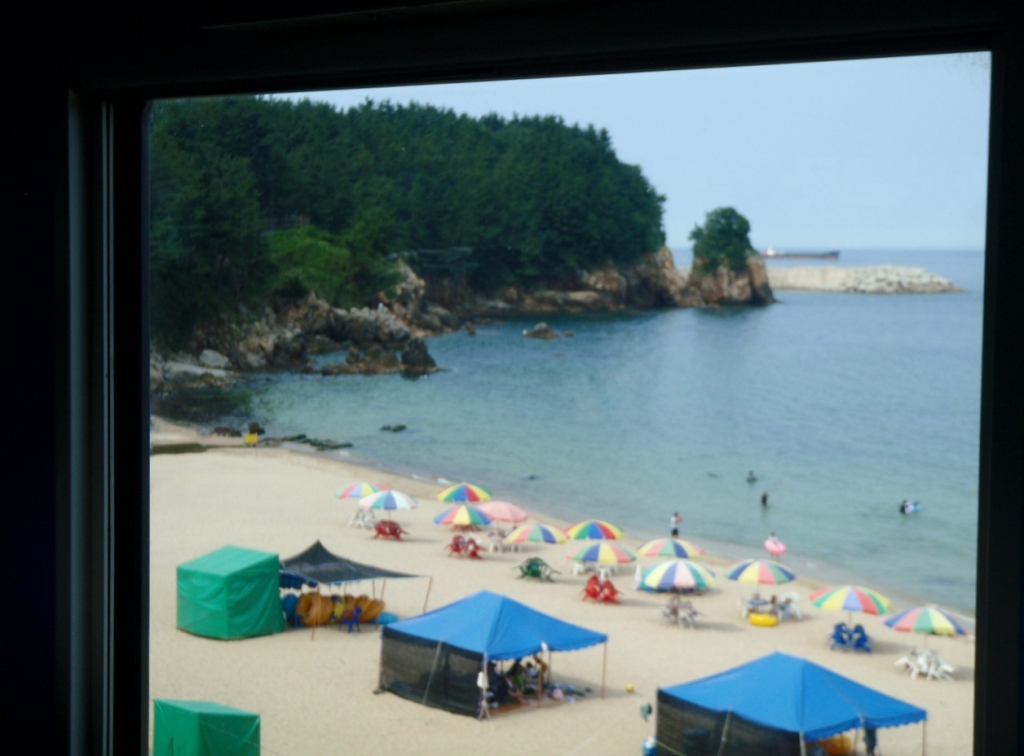 Before we knew it, we were in Samcheok, ready to hit the town.

One final glance back at the Seatrain and it was off to see what we could see. 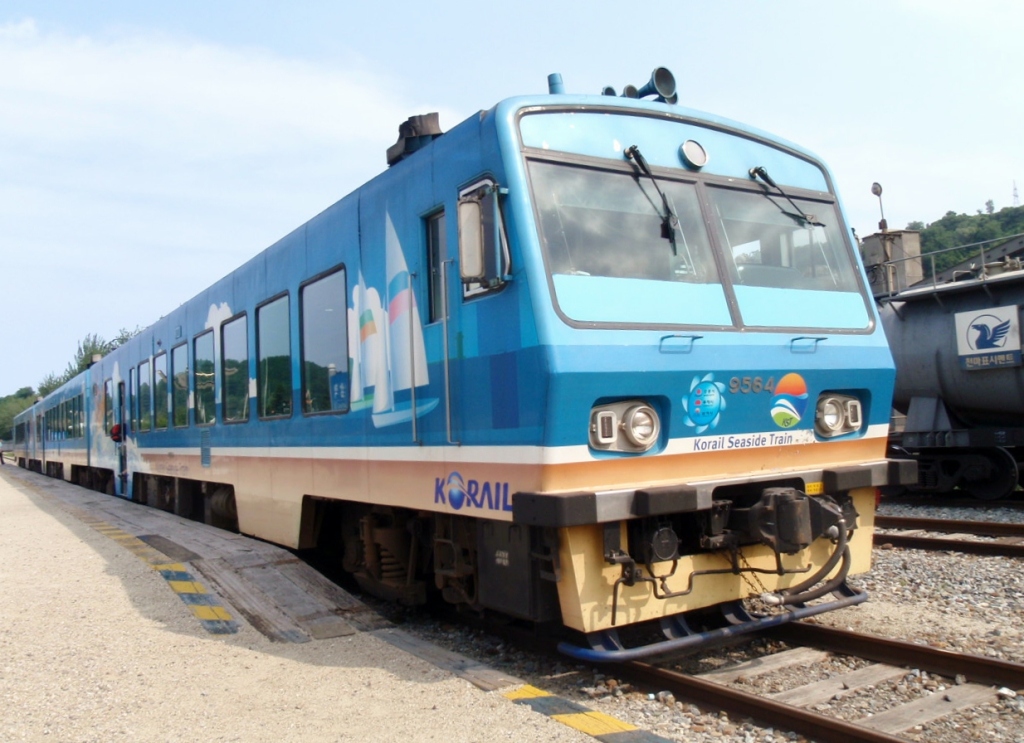 Being suckers for a good sun-burn, we thought we’d head straight for the beach to see whether we could get accommodation close by and slut from room to beach to room to beach.  Sadly, the only places for rent were about triple the normal price, due to being peak summer season, and were pretty substandard dives at that!  A photo was taken of the beach, well, the amusing sign on the beach, and then it was off to the ‘downtown’ area to find more suitable accommodation.

Once settled in our digs for the night, we set off exploring.  The local kids looked like they were having a blast playing in the fountain, no doubt a relief from the hot, muggy day.  As much as we wanted to jump in too, we thought it might be a bit creepy if two hairy, white foreigners with no kids joined on in the action.  We made plans to sneak back late at night. 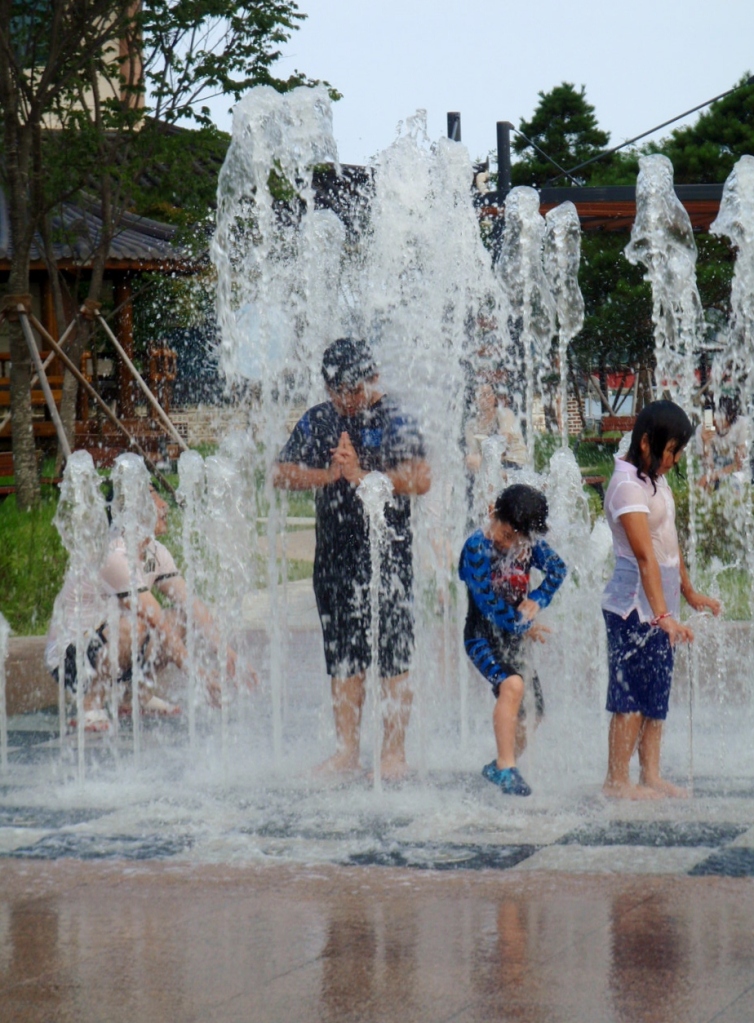 In the meantime, we busied ourselves with the attractions of the cave museum. 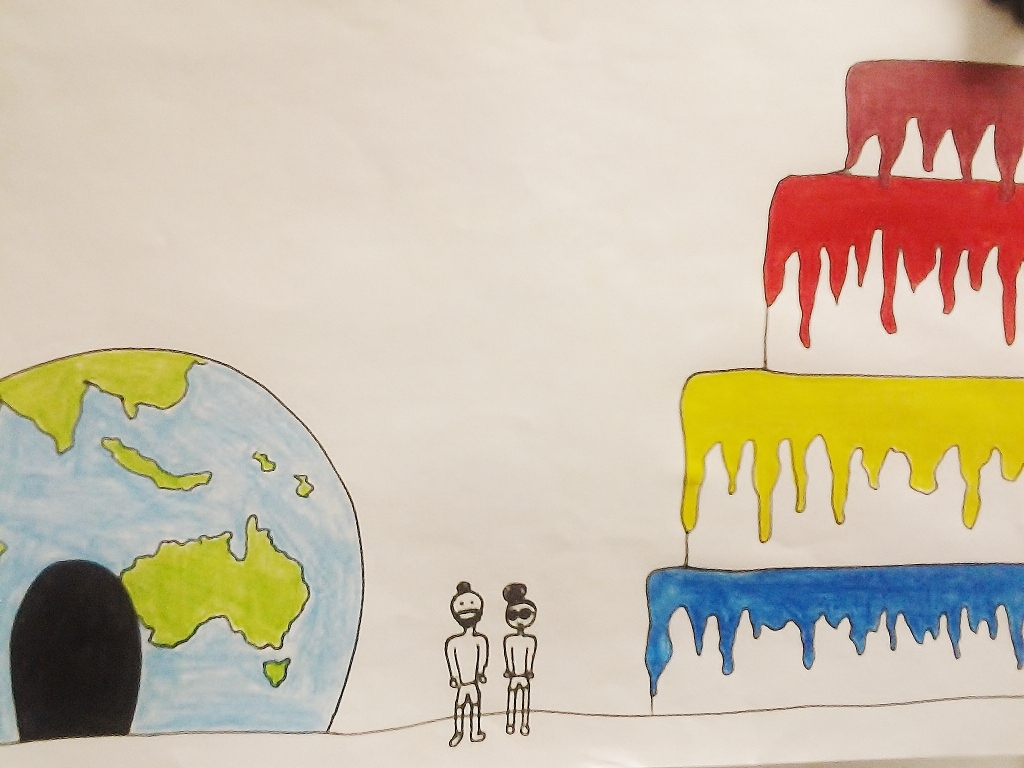 All caved out, it was time to head back to town to execute our sneaky night-time plan – alas, the kids were STILL there, making the most of every drop of water shooting up in colourful jets.  Only slightly less creepy than bathing with other peoples’ kids, we took photos of them instead. 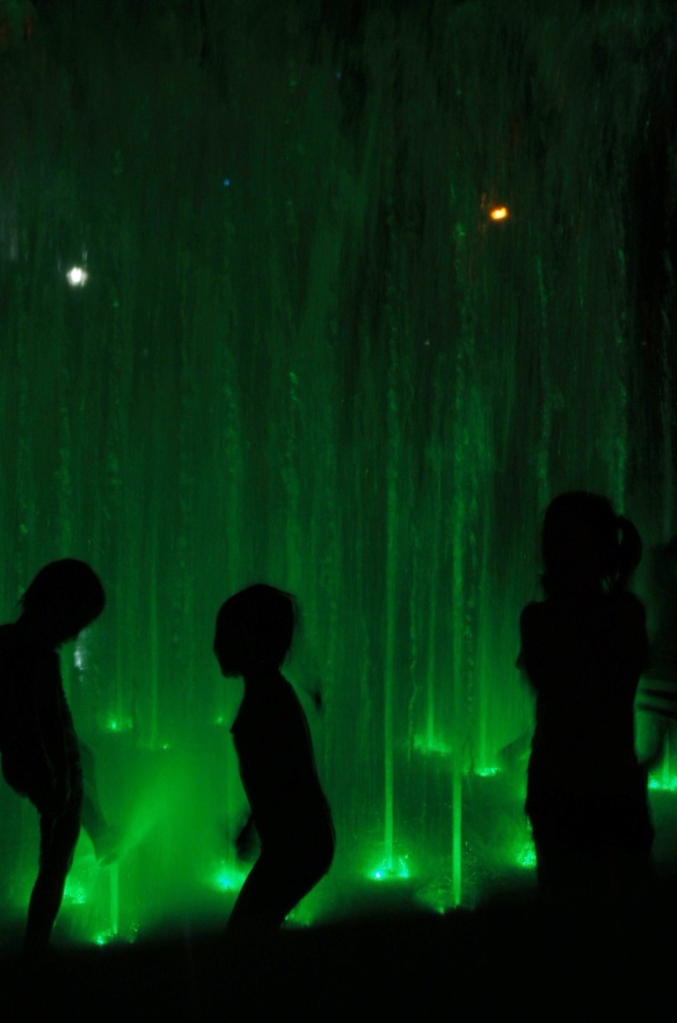 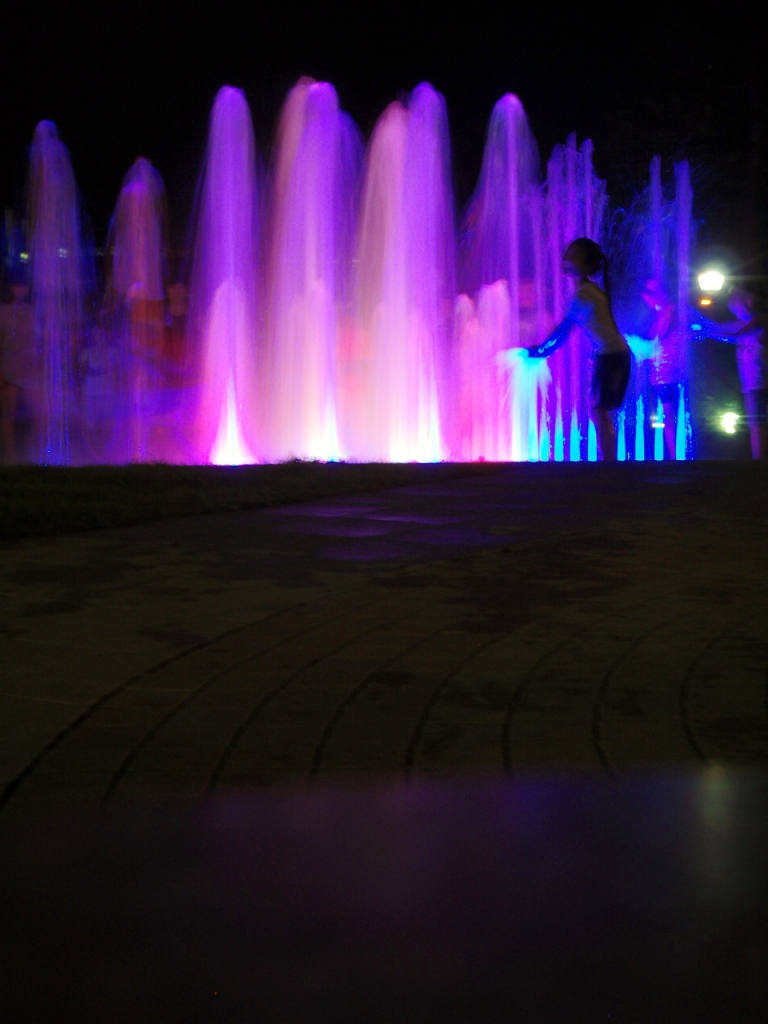 And with that, a lovely first day in Samcheok was coming a close.  Just enough time to sit back in a local cafe and plan the next day’s adventures, before retiring for the evening.  An early start beckoned for something quite spectacular…