Its kinda freakn’ hot here in Korea at the moment.  Days are humid and sticky and, being the middle of the monsoon season, often pouring with rain with the odd bout of crackling thunder and sheet lightening.  Exciting stuff!  We’re certainly not complaining – after two winters back to back the heat is welcome as is the rainy season…it just serves as an exciting reminder that we’re having an adventure somewhere far from home.

We have discovered that one of the treats that comes along in a Korean summer (along with the beaches ‘officially’ opening) is a cooling dessert item called 팥빙수 patbingsu.  We’d seen random advertising cropping up all around the village but hadn’t given it even a second glance or put any thought into what it actually was.   Our narrow-minded dessert budget had previously only extended as far as ice-cream.  But that was all to change when one afternoon while visiting our friends at the bakery, Mi Soo sat us down and instructed us that we were going to be fed.  She bustled around and TA-DA presented us with a large bowl of patbingsu.

So, what is it? Well, it is a Korean thing to start with though rumour has it that they may be really popular in Japan too. The original patbingsu we had from Mi Soo at High Meal Bakery was as follows: 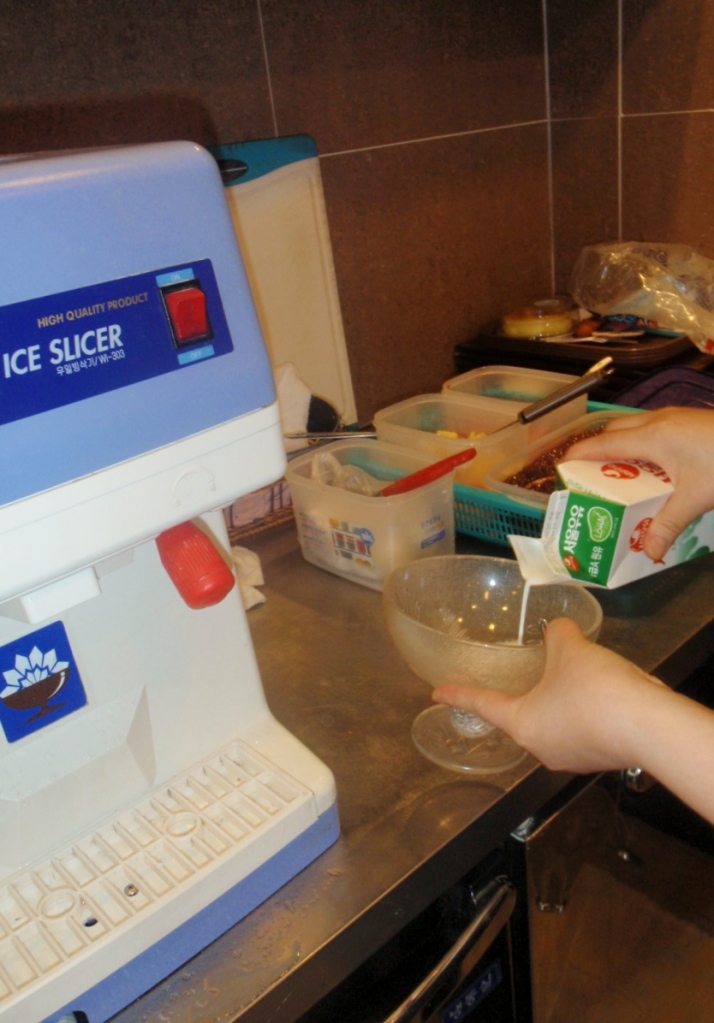 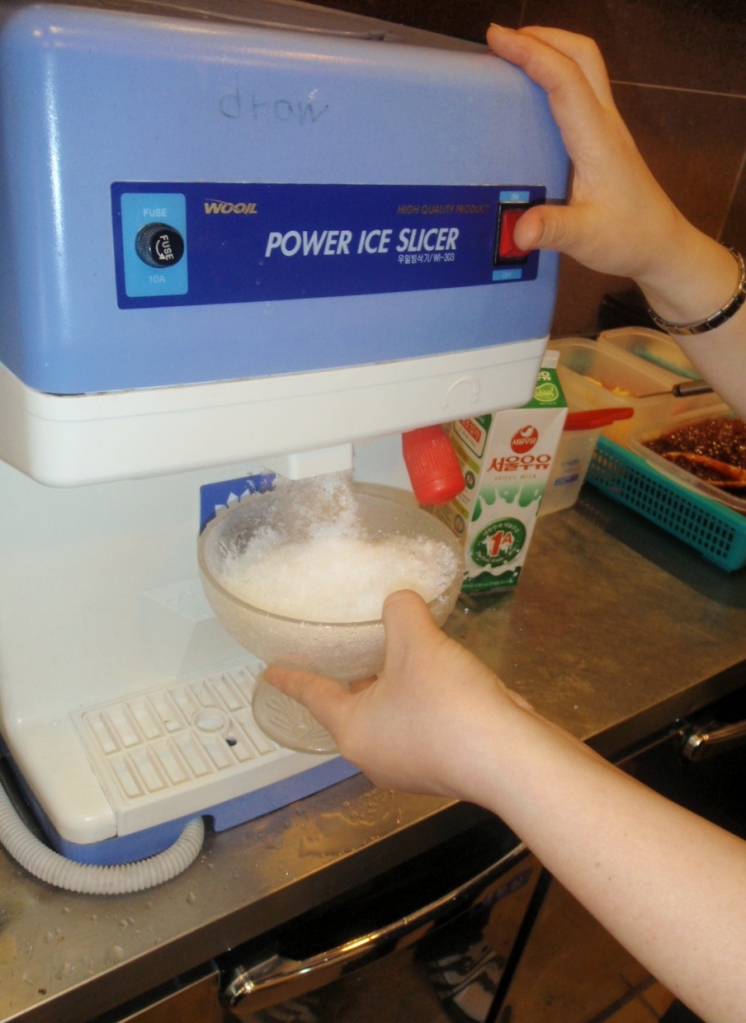 Then she smothered some sweetened azuki beans (sweet red bean paste also known as pat, 팥) over the top. 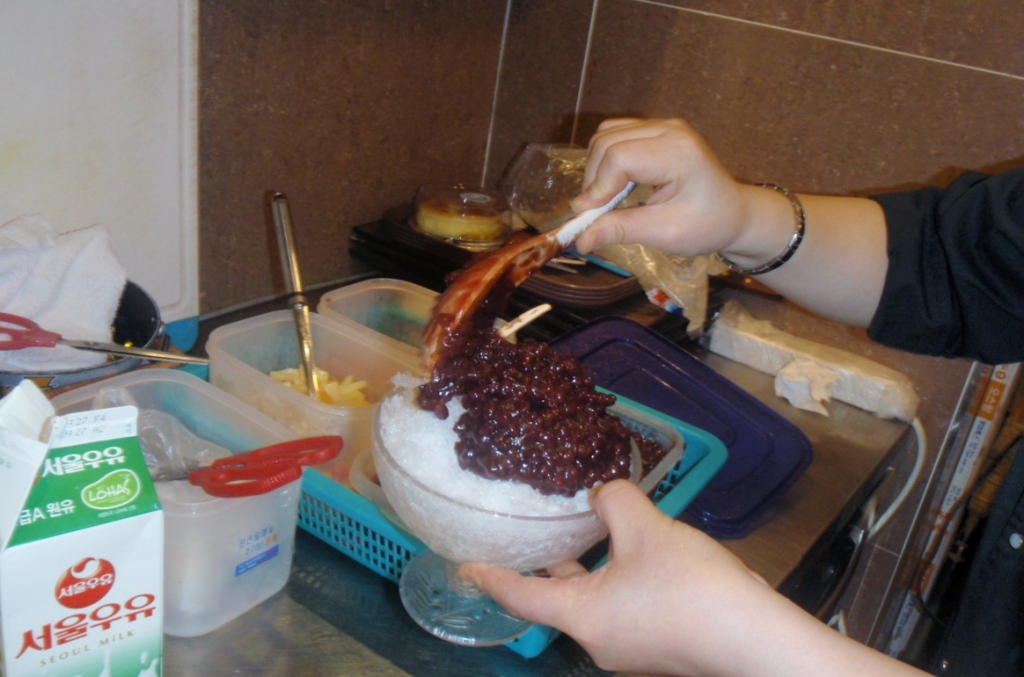 Next came a hearty dollop of tinned fruit salad (yes, there was a cherry!) 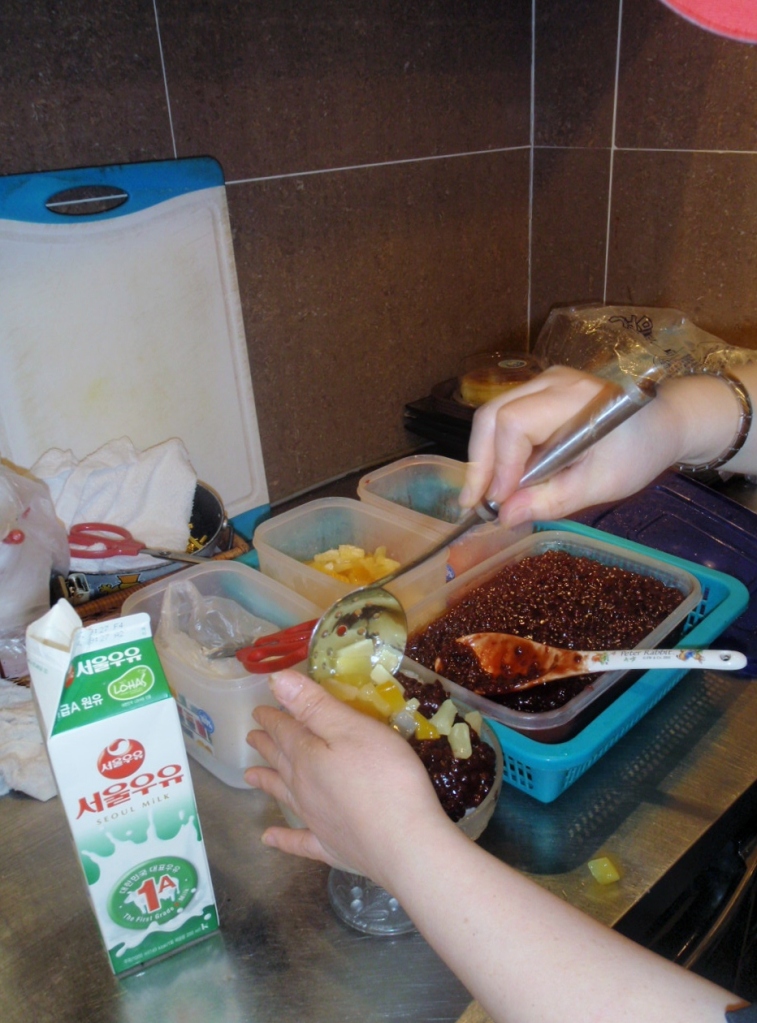 Next, she snipped some red bean paste filled tteok (rice cakes) into the mix. 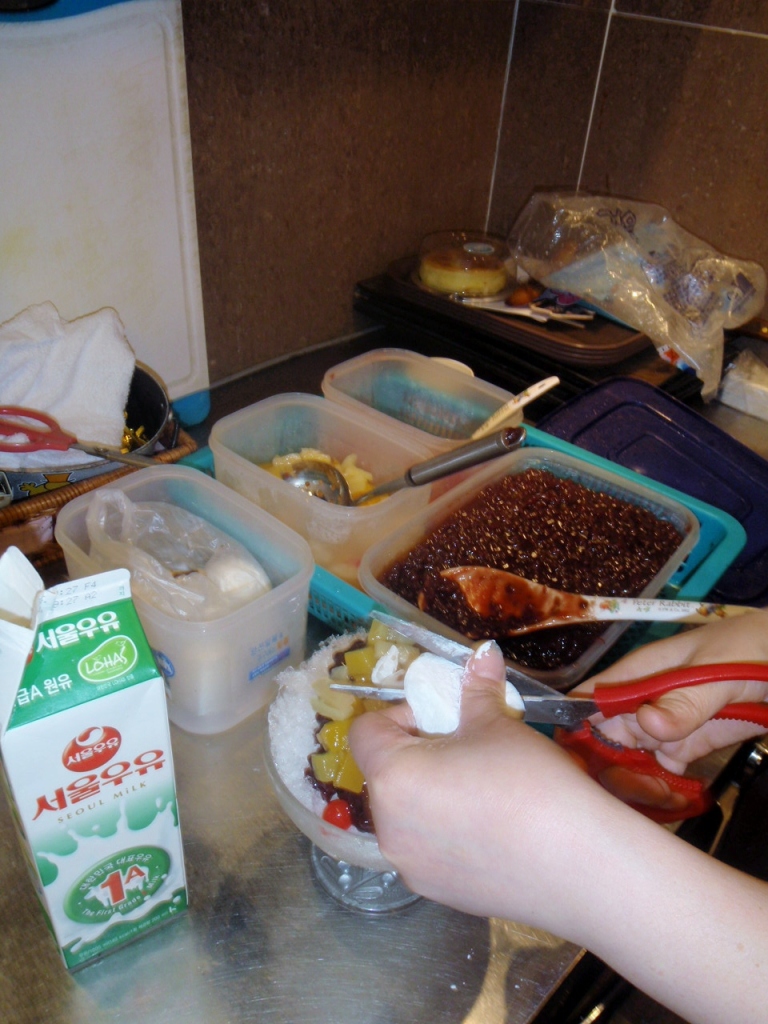 Followed by a slightly confusing dollop of freshly cut tomatoes (well, they are technically a fruit, right?!) and an artistic drizzle of something white squeezed from a bottle. 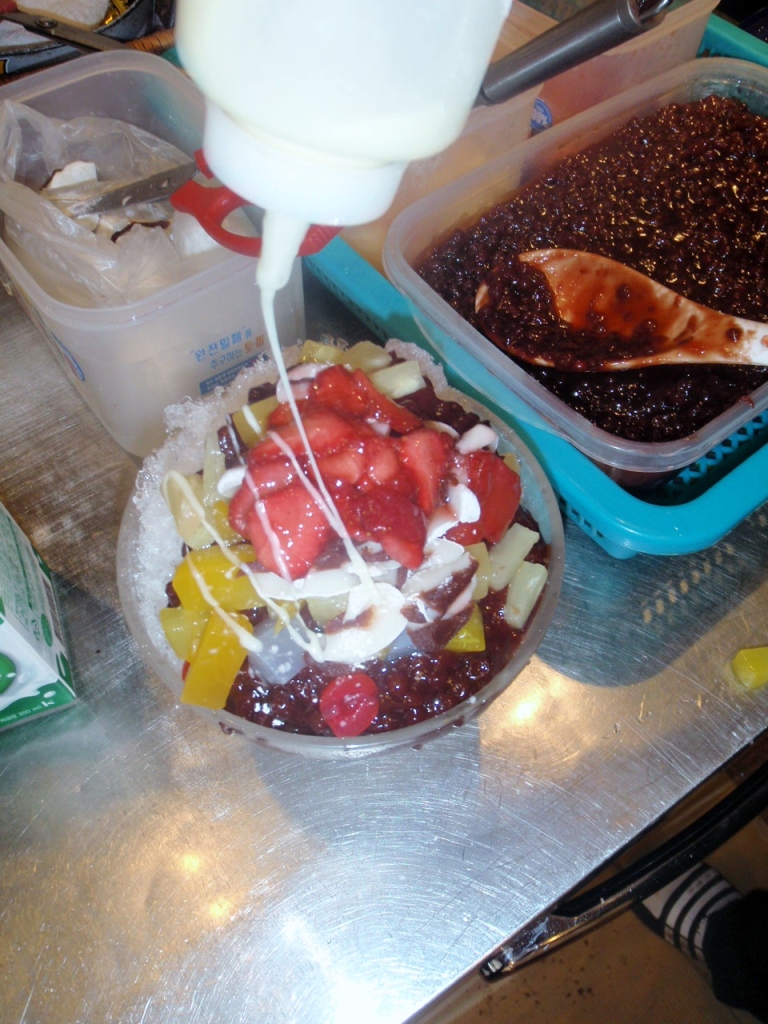 Before you know it, the final product!  A heaving mound of stuff for two to share. 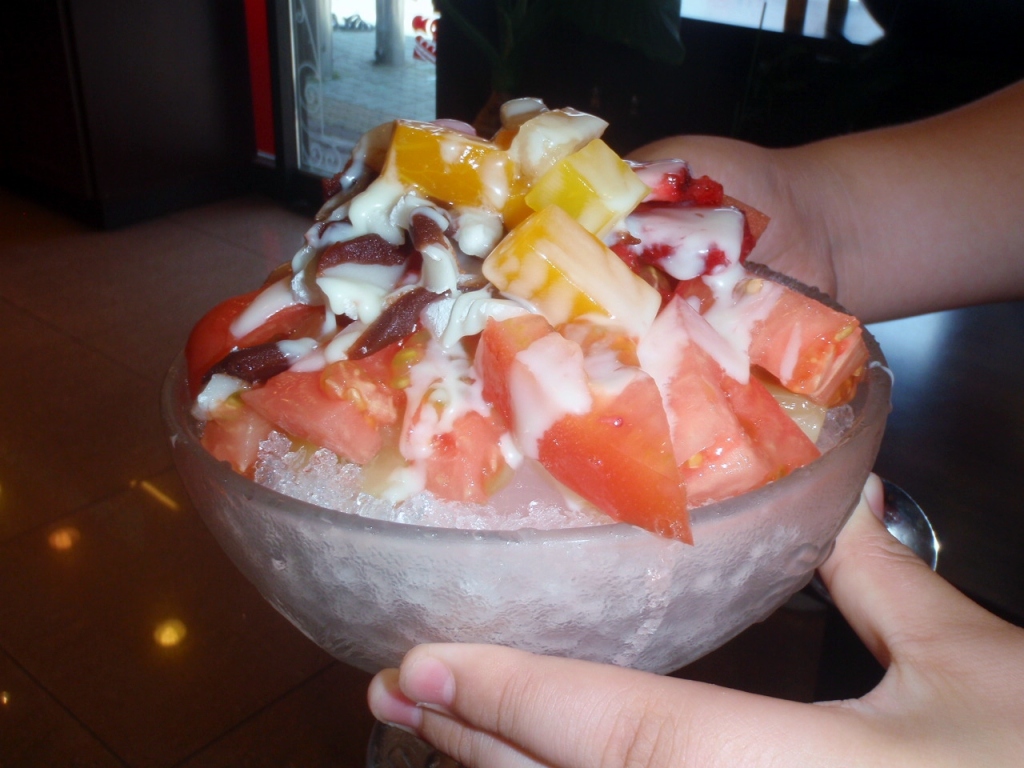 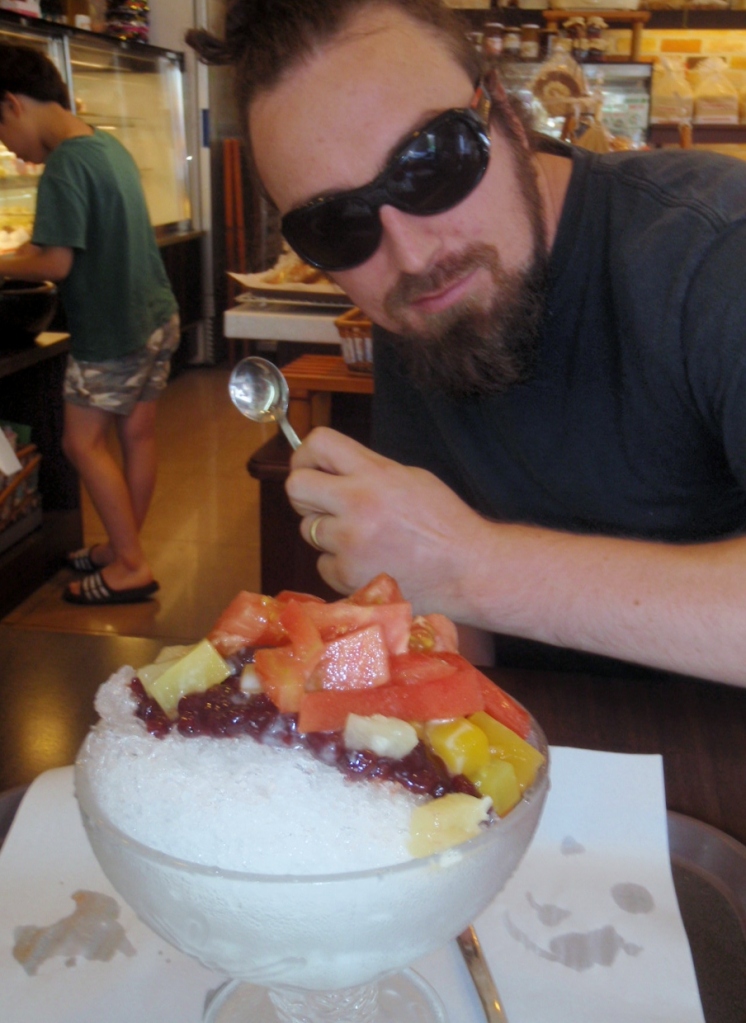 After H-J shoved all the tomatoes over to Dan’s side of the bowl, we dug in…and although we were initially somewhat sceptical, it was actually bloody delicious!  Its a rather refreshing dessert, thanks to all the ice, but also sweet and textural.  Neither of us are fans of tteok normally (chewy, bland, rubbery crap that Koreans ADORE) but it provided a nice contrast to all the sweet and icey in the patbingsu.

Now hyper aware to the advertising all around the village, we noticed that most places did more than one variety.  And that’s how we found ourselves slutting through the Deoksin patbingsu scene to try out the many different toppings and styles.

First stop, in which Dan needed absolutely no encouragement, was Baskin Robbins.  They had four choices on offer: the classic, strawberry, green tea or milk tea. We opted for the milk tea one which came with two big scoops of ice-cream, a squiggle of chocolate sauce and some crumbled cornflakes.  It was pretty delicious though pretty ice-creamy (not surprisingly!). 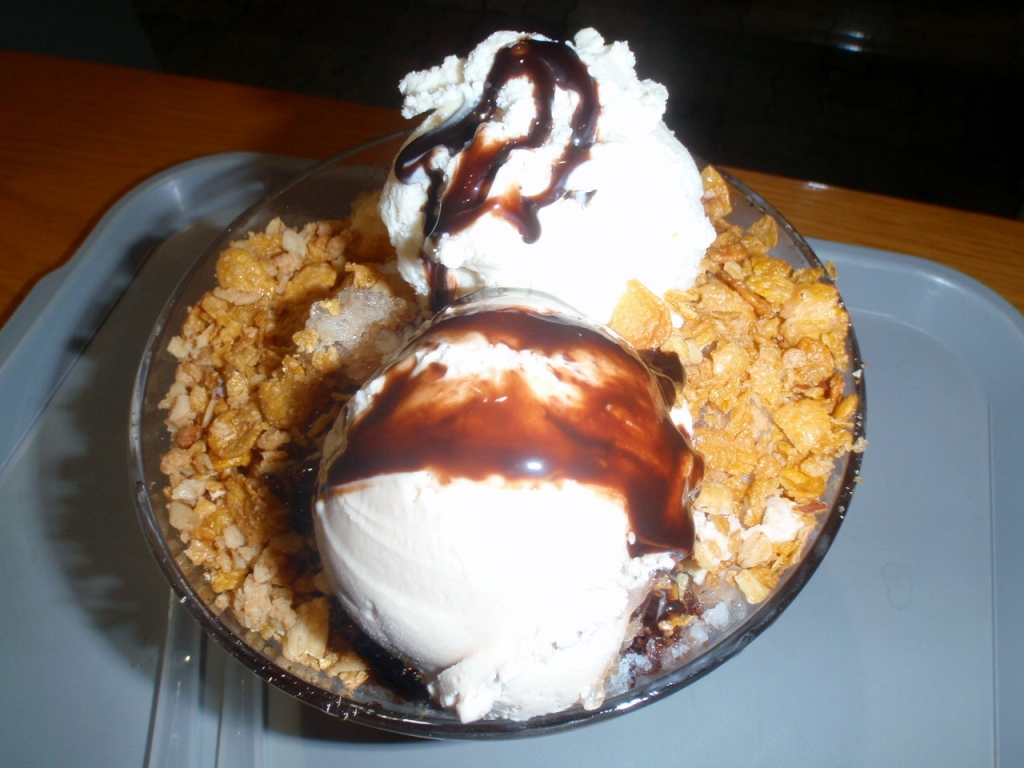 Next on our hit list was the local branch of Paris Baguette, a bakery/cafe found in every nook and cranny of Korea.  They had an initial menu of seven or so different varieties of patbingsu – alas, our ‘local’ had crossed three of them out with pen.  Deciding to try something a bit fruity this time round, we chose the blueberry binsu. 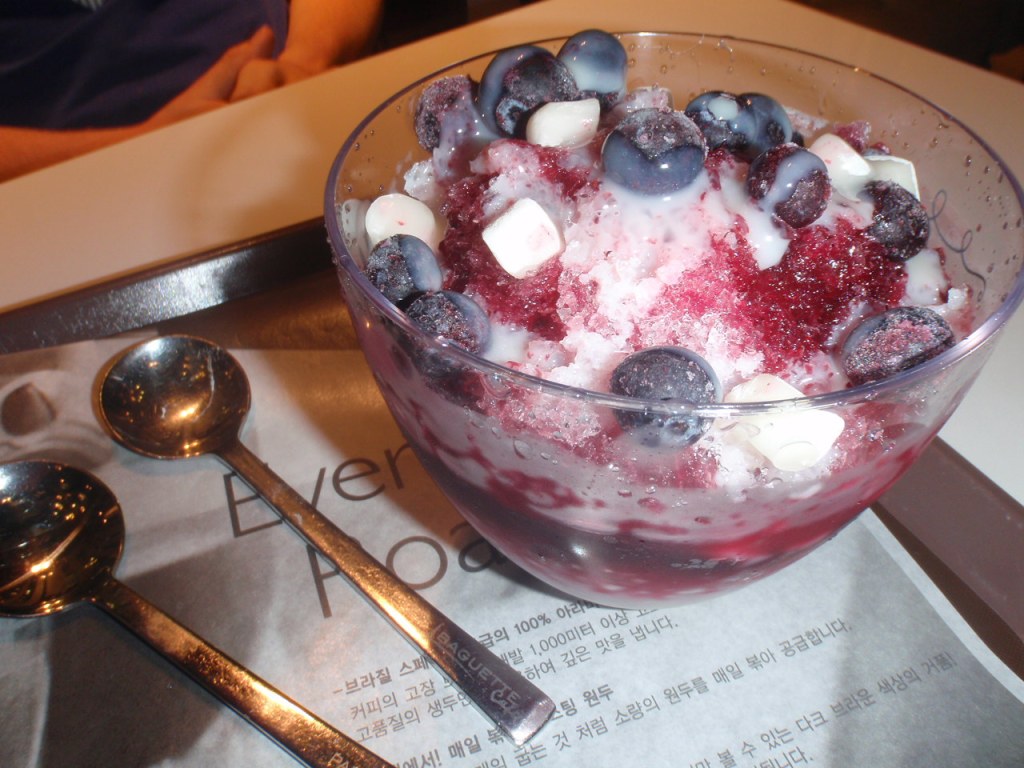 Now, if you can imagine eating straight sickly-sweet blueberry syrup only broken up by still frozen blueberries, some chewy bullets and ice, you’ll get somewhere close to imagining just how awful this particular model was.  We wandered off into the night in an intense sugar coma without even attempting to finish it…

Little Deoksin village has recently had the pleasure of acquiring a new cafe!  As cafe sluts in our previous lives, we were thrilled that there was a ‘third place’ to go and sip coffee and chill out that wasn’t a busy bakery.  A proper, grown-up cafe.  We’ve made it somewhat of a regular haunt due to its $2 Kahlua Coffees (H-J) and its $1.50 chocolate ice-cream waffles (Dan).  Of course, it was a given that we would be kind enough to sample their take on patbingsu!  With three offerings, a standard, a fruit and what was intriguigingly labelled “couple bingsu” we decided to live dangerously and order the unknown.  The couple bingsu arrived at our table replete with the pretty standard (cause we’re experts by now) toppings of bean paste, canned fruit, and lots of bean paste filled tteok.  It was a shining example on a larger than average scale! 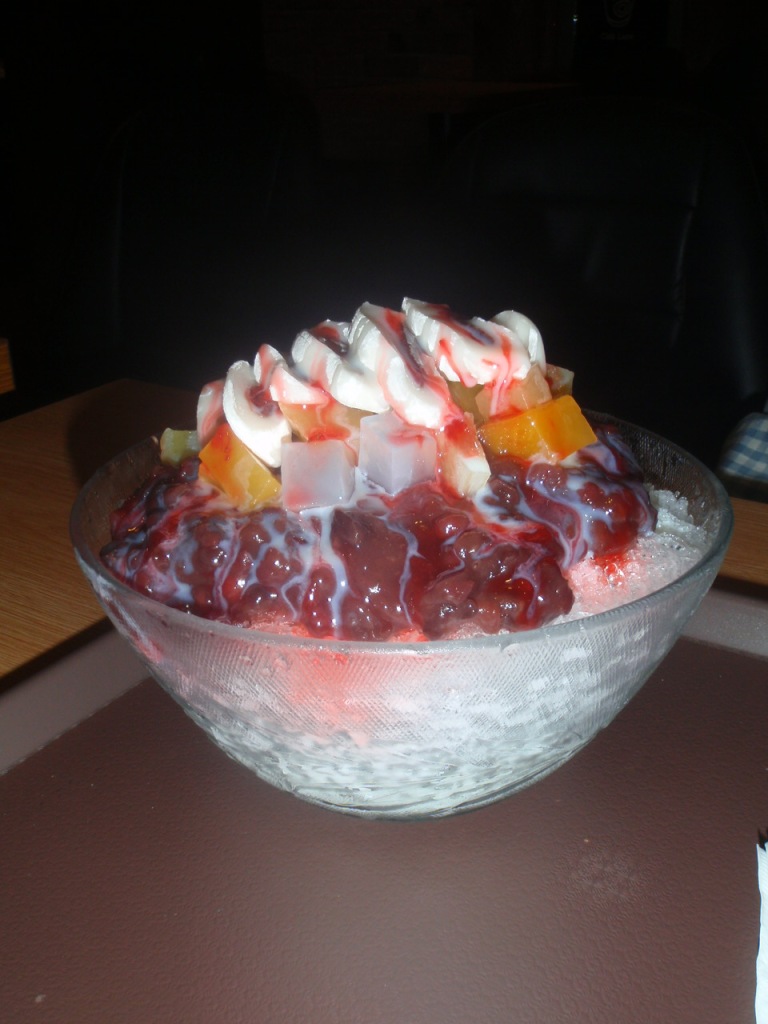 Speaking of cafes, we couldn’t help ourselves and upon a recent visit to Ulsan we popped into our favourite coffee spot, Cafe Bonito.  We discovered this place very early on in our travels in Korea and had been lured in by the fact that its also a barista training academy; being the coffee snobs were are, we figured they might actually do a decent coffee!  Its been one of the few places in Korea that we’ve gone back to time and time again due to the ability to get something resembling the super high standard we’re spoiled with back in New Zealand.  This time however, a cheeky sign greeted us as we headed up the stairs… 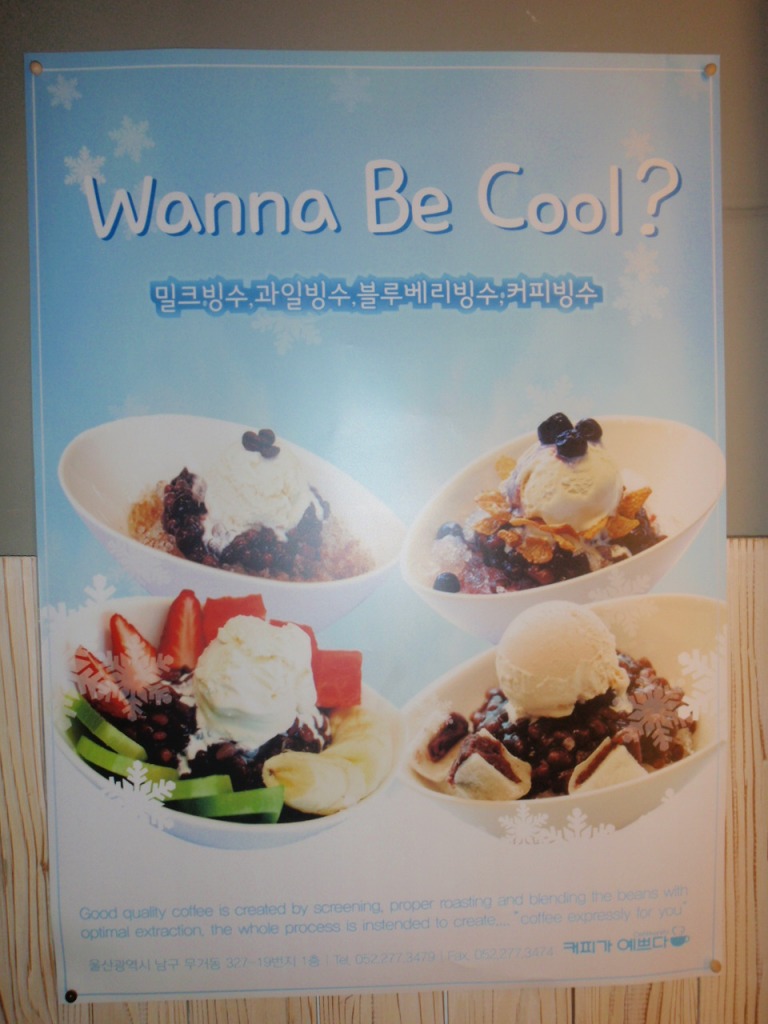 Of course, this cafe was good enough to have a coffee patbingsu on offer so naturally we ordered that.  Coffee drizzled ice, a thick gloop of bean paste, tteok and a pristine blob of vanilla ice-cream, this patbingsu was a perfect balance of flavours thanks to its caffienated addition. 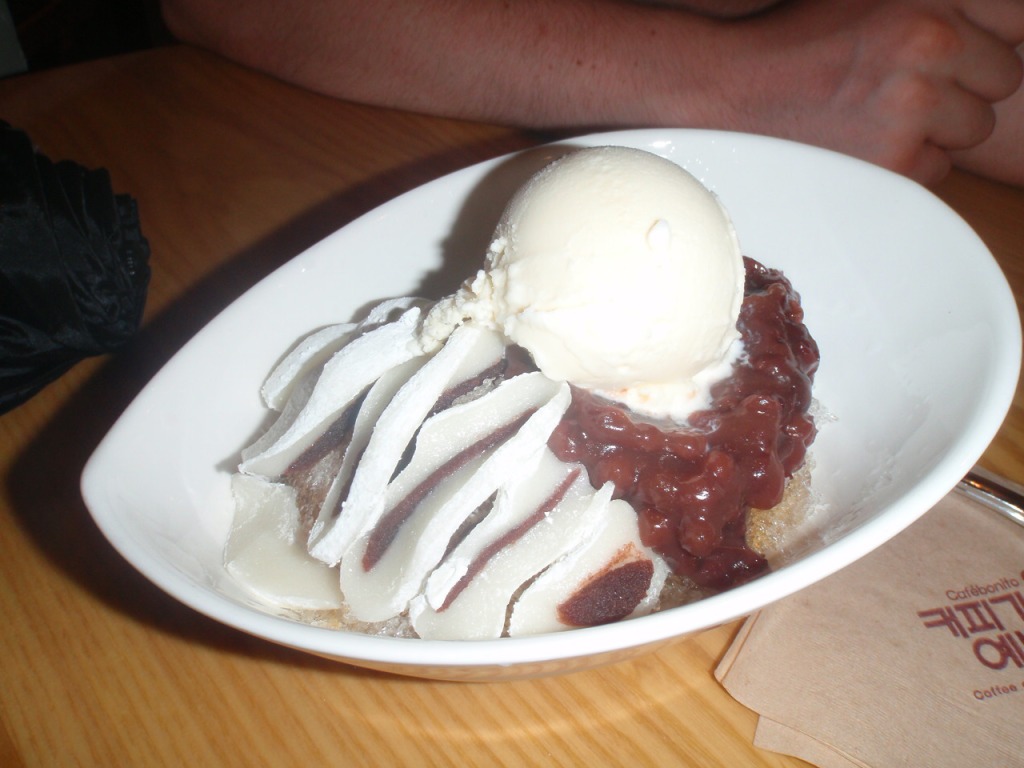 Last destination on our patbingsu hit-list was another ubiquitous pseudo-French named Korean bakery, Tous Les Jours.  Perhaps riskily, we decided to give the fruit theme another try and duly ordered the Mango Tango Patbingsu. 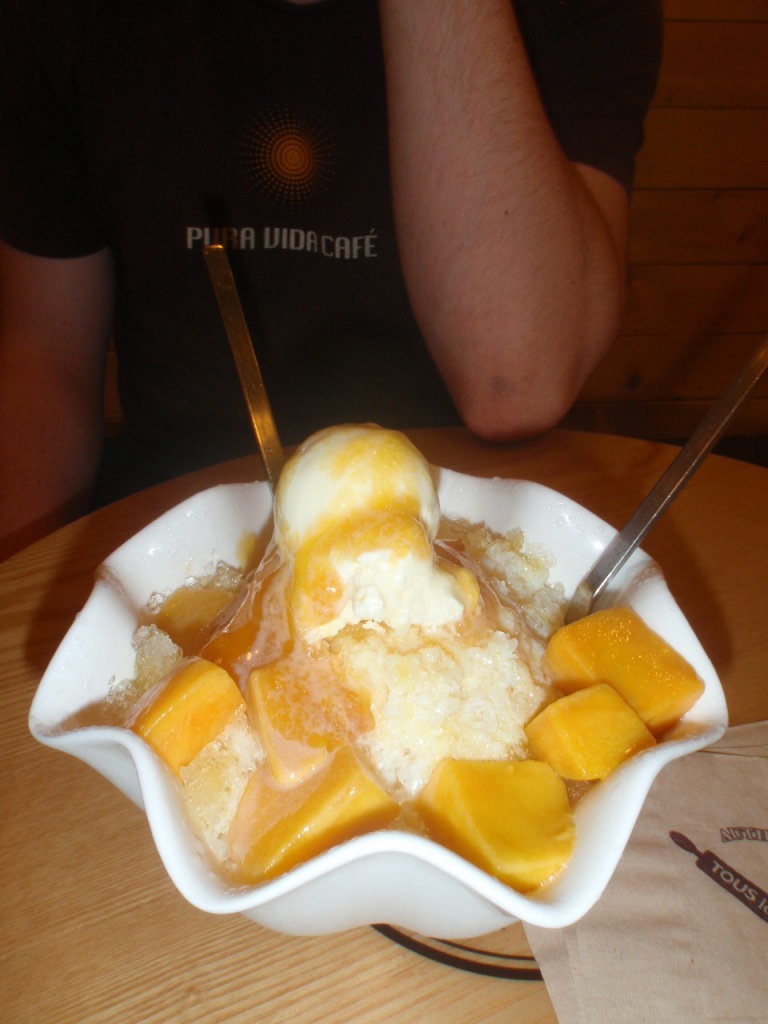 Now, we could be wrong, but the mango tasted much like actual FRESH mango which was a great change from the canned fruits often adorning these creations.  The syrupy juice wasn’t too overpowering either and all in all it redeemed the fruit based patbingsu for us.

For a snack that had humble beginnings as simply ice shavings and sweetened azuki beans sold by street vendors, it has certainly morphed into something more elaborate.  Given the chance on a hot summers day, its definitely worth trying it for yourself, no matter what toppings your heart desires.

Oh, and in case you’re wondering, our favourite to date is the coffee one!  But summer isn’t even halfway through yet…

p.s For those of our regular followers who may be concerned about our health, please note that unlike the Busan burger challenge these patbingsu visits were not attempted over the course of one day.