Last week Dan went to his school knowing that he would have to have a dreaded conversation with his director about one of his trouble classes (those of our readers that have been reading the blog regularly will know that three weeks ago Dan got fired and the next day then got ‘un-fired’).

The day he became ‘un-fired’ he sat down with his director to nut out the hard issues – you know tough stuff like not smiling enough and so on…. He was informed that one of the issues concerned a particular class and that he was pushing them too hard and changing too much of their essays (well as a teacher, in most cases, pushing a student to succeed is a good thing and changing unreadable and incoherent essays with shocking spelling, structure, and grammar is, again, a teachers job!). His director had told him that after the mid-terms she would give him the work that she would like the students to work from.

The dreaded conversation started when Dan asked for the work that the Director was going to prescribe for the class. He was told by a very embarrassed director that she had forgotten and Dan should organise the class. Dan was fine with that as he already had a bit of plan in the back of his mind. But just to make sure he said he would give a written lesson plan to the director to see before he taught the class.

For the next 45 minutes Dan typed furiously away putting together an excellent plan using Haiku to illustrate syllables, phonics, vocabulary and poetry. Being proud of the creative plan he gave it to his director hoping that it would not only be a good class plan, but also another step towards building the bridge between the issues of three weeks ago.

The director looked at the work and said “Why? What’s the meaning?”, (gotta love the top notch English there!), “I know syllables but I never heard of Haiku?” Dan explained that a Haiku is a Japanese poem that uses a 5-7-5 structure based on syllables.  “You’re not teaching this in my school”……….HUH?!?!?!

The director was not happy using a ‘Japanese’ poem and it would not be suitable for her school. Dan tried to explain that it was not about that fact its Japanese, it was the structure of the poem and how the students would learn from it… She wasn’t having a bar of it. “There are many emotions between Korea and Japan and Haiku is not good for Korean students…”

He offered to take out the words ‘Haiku’ and ‘Japanese’, leaving the lesson intact but taking out the offending items.  Still not good enough, he was informed.  She wasn’t having anything that had a ‘Japanese structure’ being taught in HER school.

He went to his class and as he entered the Korean students put down their smart phones and started taking their pens and pencils from their Hello Kitty and Rillakuma pencil cases…wait a minute…Hello Kitty…Rillakuma…where do they come from??!

That night Dan got home and started pacing. All he could think was how wrong this really was…then he started writing Haiku…he started talking in Haiku…

Will he ever learn?

…in fact it got  to the stage that H-J had to clip him over the ear and drag him down the road to  put food in his mouth.

Thinking all the time

Getting worked up while pacing

Food will sort him out

We decided that some delicious street food was the answer to our pretty shitty day. So we stopped at fried guy who was serving a very affordable plate of offal. It was awesome!!! Heart, liver, tripe and Korean style blood sausage. Delicious!! 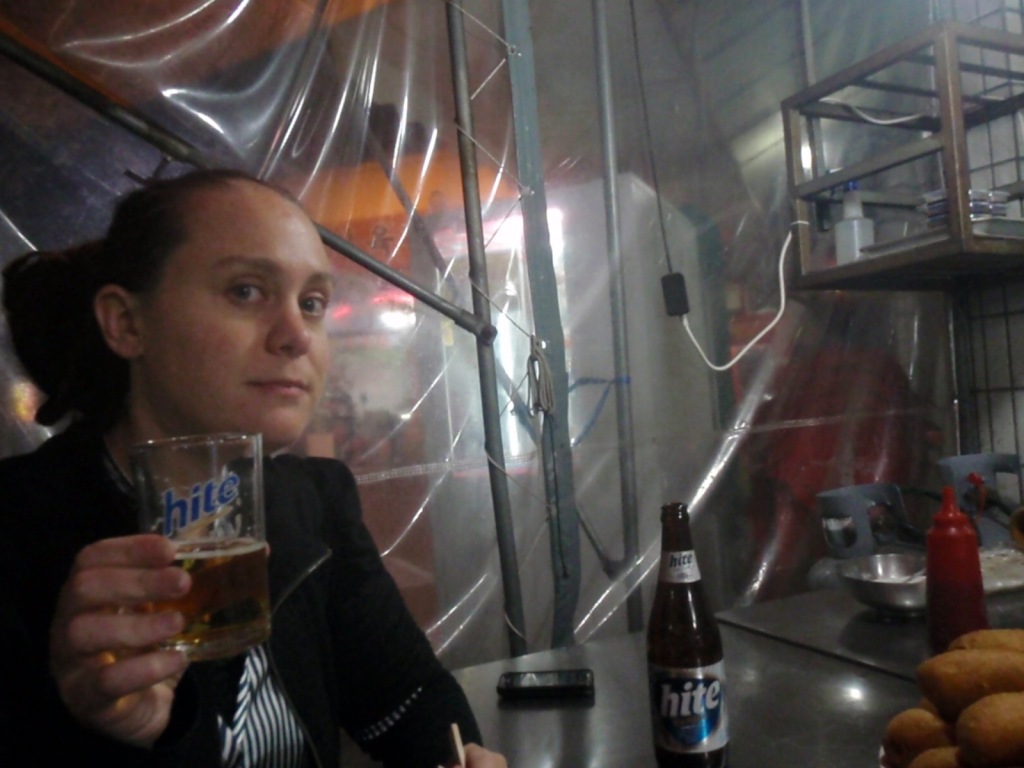 As we sat there eating our tripe, drinking our beer and cider, lamenting on the injustices of the day, we realised that there is a lot of tripe in this world. There is the good tripe – the yummy stuff. And then the stuff that is just a bunch of old tripe… like not being able to teach Haiku to kids because of the prejudice of a country.

Then there’s good and bad tripe

Can’t we get along?

Racism is an ugly phenomenon.  It exists in every country but generally frowned upon by most of a population, with racist remarks/actions being looked upon with shock and judgement.

This has been the hardest thing for us to try and come to terms with in South Korea.  Racism and xenophobia is not just the cultural norm – but an actively fostered attitude.  And while you would think that schools would perhaps provide a more liberal safe-haven from this type of behaviour, as you’re probably starting to see, it’s just not the case. 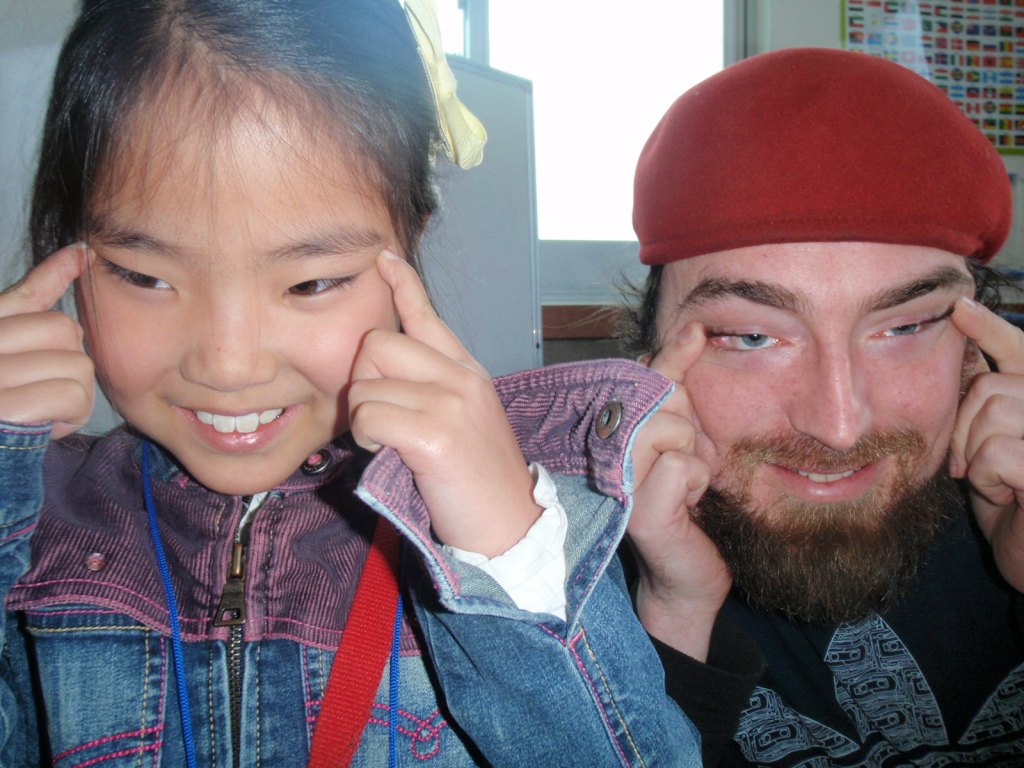 A recent study in Korea published statistics showing that a mere 36% of Koreans are even open to the idea of multiculturalism.  We would love to know what the statistics show about the number of immigrant workers that live here propping up Korea’s massive industries in roles form engineers to grunt labour.  How would attitudes to multiculturalism change if all of a sudden Samsung, Hyundai, the numerous nuclear plants, petro-chemical industries and factories all had their immigrant workers taken away from them?  How would the average Korea teenager fare without the brand new Samsung smart phone immediately available at a cheap cost?

We are exposed to the attitudes of children aged 5-16 on a daily basis, so it’s a pretty accurate way to view what attitudes the next generation of South Koreans are growing up with…and believe us, it’s not pretty.

Occasionally, we use textbooks that have been printed in countries other than Korea and so have pictures of people who aren’t, well, Korean.  In one of H-J’s memorable classes the children (14 &15 year olds) opened their books to the day’s lesson and were presented with a picture of an African-American woman.  All the kids started hollering “ugly! ugly!”, “yuck”, “monkey”, “UGLY”…Most defaced their books, drawing additions on the rather beautiful black woman’s face.  One went so far as to take a pair of scissors to his book. 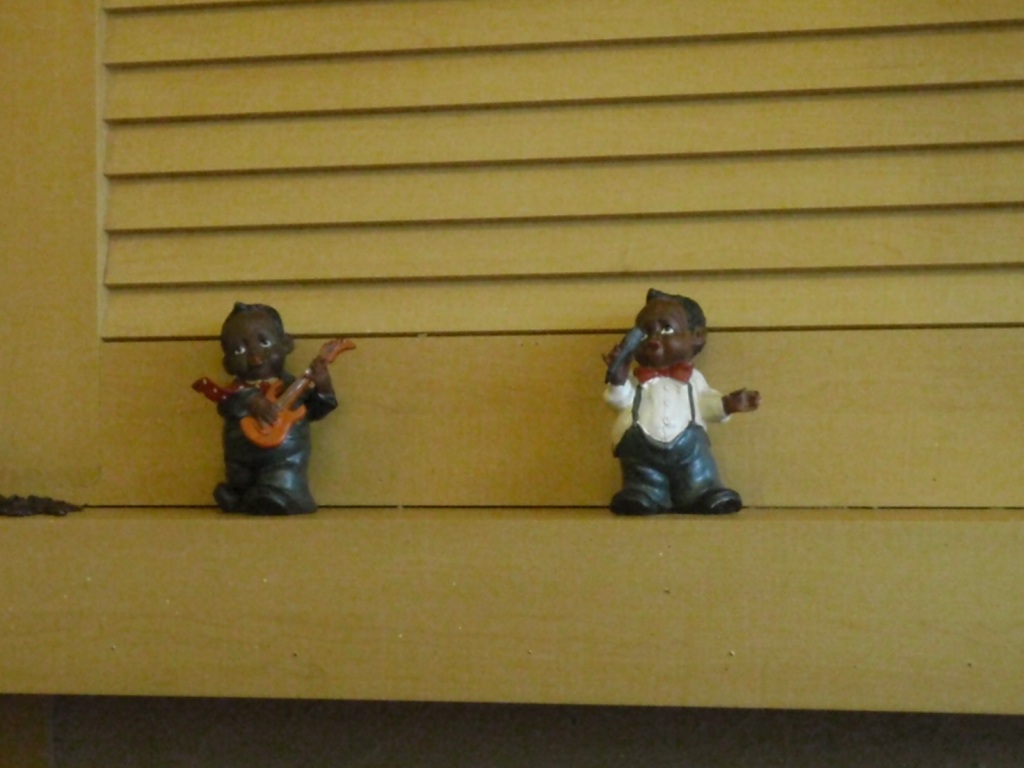 When mentioned to the other two teachers at the schools (both Korean) they shrugged it off and continued to play on their smart phones.  Neither the destruction of school books nor the blatant racism bothered them a smidge which is pretty telling in itself.  After all, kids learn this behaviour somewhere.

Another class involved looking at a map to answer some questions in the book.  When H-J pointed to New Zealand and asked “what country is this?” the response was, “trash”.

While supervising a middle school examination prep class one day, H-J pulled out a pad of Rillakuma writing paper.  Upon seeing the paper, one of the oldest and brightest students in the class started yelling, “Die Rillakuma!”.  This led to a chorus from a few other of Die Rillakuma, Die Hello Kitty.  While at first glance it seemed that they were just teenagers too cool for childish cartoon characters, it became quickly apparent that the hatred was much more pointed – “Rillakuma is Japanese.  Die Japanese.  We hate Japanese.  Die Hello Kitty.  Die Rillakuma.  Japan dirty.”

WTF?!  And just to really hammer the point home, the same racial slurs were reiterated the very next day by a completely different set of students.

Now we are not for one minute playing down the importance of historical relations between Korea and Japan.  Some evil shit went down.  And many Koreans are still angry on a daily basis at the Japanese for the current debate going on about the official name of the Sea of Japan/East Sea.  And a certain island that both countries lay claim to.

How on earth are children in this country going to be equipped to be global citizens when racism is constantly allowed to breed here?!  Its worrying.

It’s not just in the schools though.  The area we live is rumoured to have a high crime rate.  Why?  Because it’s full of immigrants from Sri Lanka, Pakistan and Uzbekistan who “come over here without their wives.”  We’ll leave you to fill in the rest of what that comment suggests.

A recent attack on a mountain hiking trail led to the comment that it was “Indonesians or Ethiopians” that were responsible.  It seems unlikely that we would need to point out the HUGE visual differences of such races.  It doesn’t matter – the point was, it was foreigners.

Having recently made a couple of friends who are fluent in both Korean and English has opened up our ears to some “interesting” thoughts.  Our friend got the hard word from her sister as she had been spotted by someone “talking to the foreigners”.  Oh no, just when you were thinking that maybe being white here might make us immune, we get our fair share too.  People will take the long way around to avoid having to walk too close to us.  Mothers often push their children behind them or to the side of them for fear of us…? Well, we don’t know. Eating their children?  Kidnapping them in broad daylight?  Who knows!

Problems with discipline or behaviour problems at school?  Kids out of control, cutting up their books, yelling and being racist and rude – It’s not the kids EVER, its the white teacher. “They do things differently where they come from”.

What a bunch of tripe. 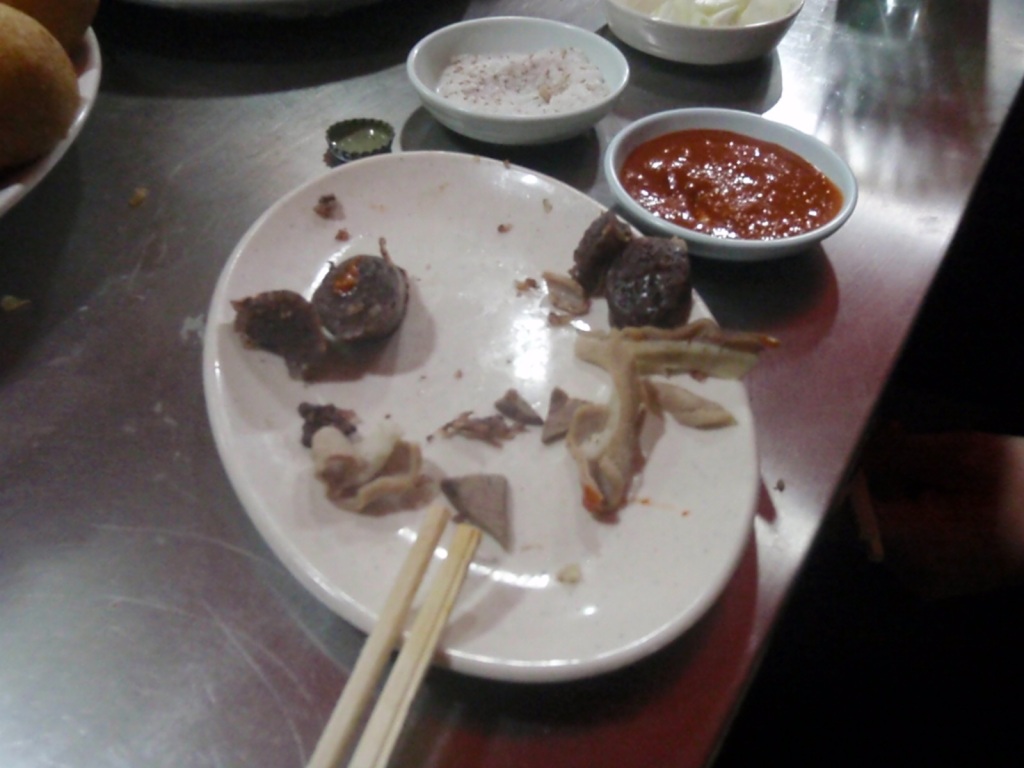 Don’t get us wrong, Korea doesn’t always suck, but some days it feels like there is a lot more of the world you could be seeing.

Only one way to stay sane