We woke up feeling excited and refreshed, ready for another day of hitting the sights in China. While we had only rested our heads for around 6 hours, after the last couple of days of next to no sleep this was so needed. We cruised down to the buffet breakfast and started to load up our plates. We had been to a couple of buffets in Asia but none of them had something that we had been yearning for for such a long time….New Zealand butter.

Dan’s father once told him that stealing is wrong, but “nicking” is fine. While H-J’s ethics are usually slightly different on the matter, NZ butter is NZ butter so morals aside… we went a nickin’!

After taxing around 200g of Anchor butter sachets we got ready to jump on the bus. It was snowing outside so we dressed up in even more layers than the previous day which at times made it hard to bend our limbs.

The drive to The Great Wall was to take around an hour and a half, so to break up the journey we were taken to a Jade “Factory” – pretty much any time you are told you’re being taken to any sort of factory, it basically means you’ll get about 2 minutes of being spoken to about the product, then an hour to wander around the merchandise being hassled by pushy sales people.  We managed to avoid buying anything but spent the time wandering around looking at stuff and taking photos. 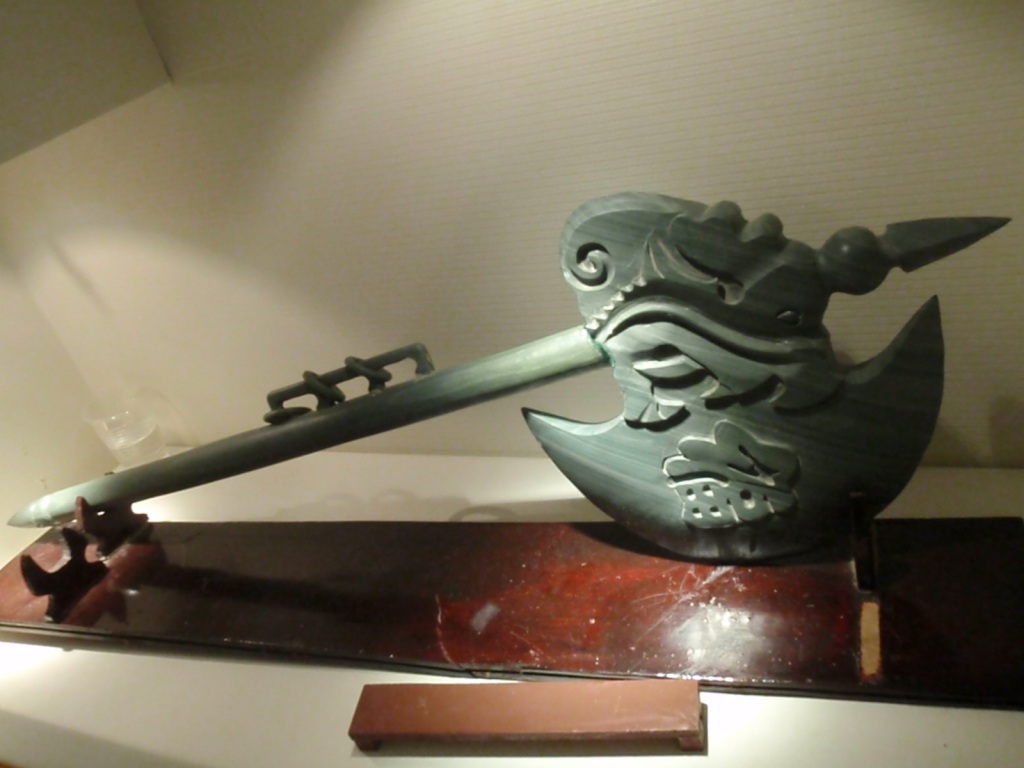 After hanging around the factory for aaages, we started to get really restless and bored.  All we wanted to do was jump back on the bus and get to one of the wonders of the world, The Great Wall.  Luckily, this eventually happened.  Our excitement was palpable.

We arrived in a row of tour buses,  jumped off and practically ran towards the wall.  We were given the option of which way to approach the wall – one direction led on a gentle incline up a hill, the other led straight up a steep incline to the very top with reported amazing views.  Of course, we chose the second!  We began our journey with a cheesy photo – it had to be done.

Dan bounded up the hill like he was on a mission up Church Street but quickly realised that it was slightly tougher going and more prolonged.  It was all up about an hour of steep stair climbing with many of the steps being a high as H-J’s thigh (making it quite tough for short legs!).

After around 45 minutes the crowds of tourists, some in heels (who you trying to impress?!!!) dropped off somewhat, leaving only the hardiest and most determined of climbers to reach the summit.  The track became dusted with snow and we became hot and started stripping off items of warmth for the first time since having arrived in China. 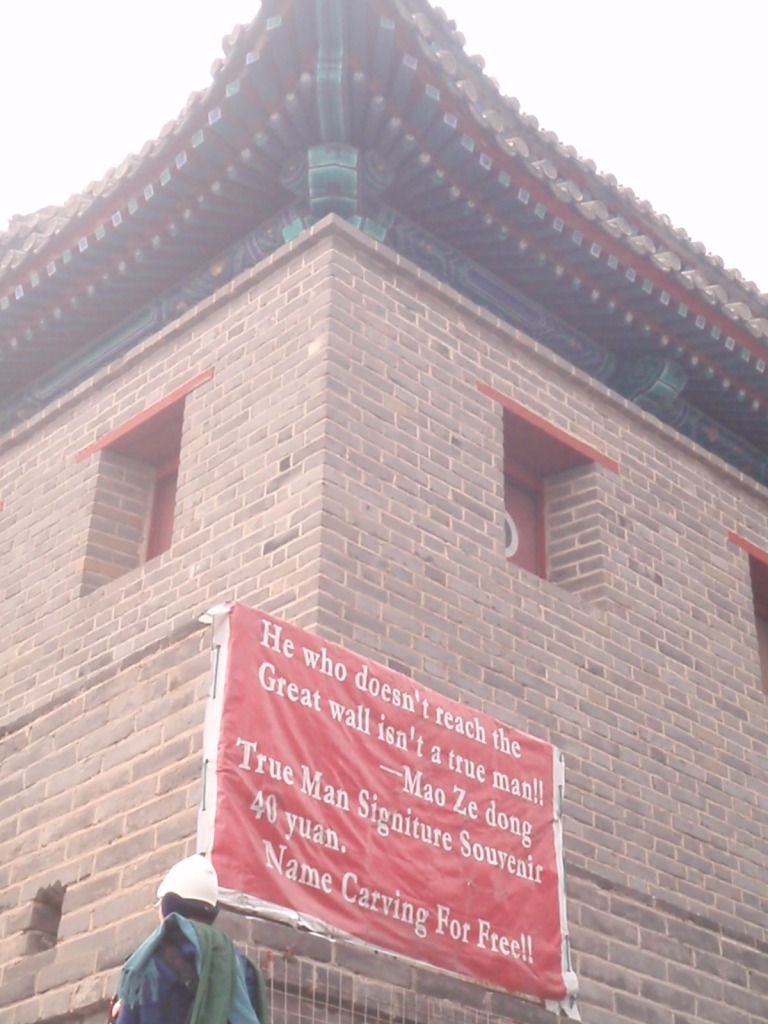 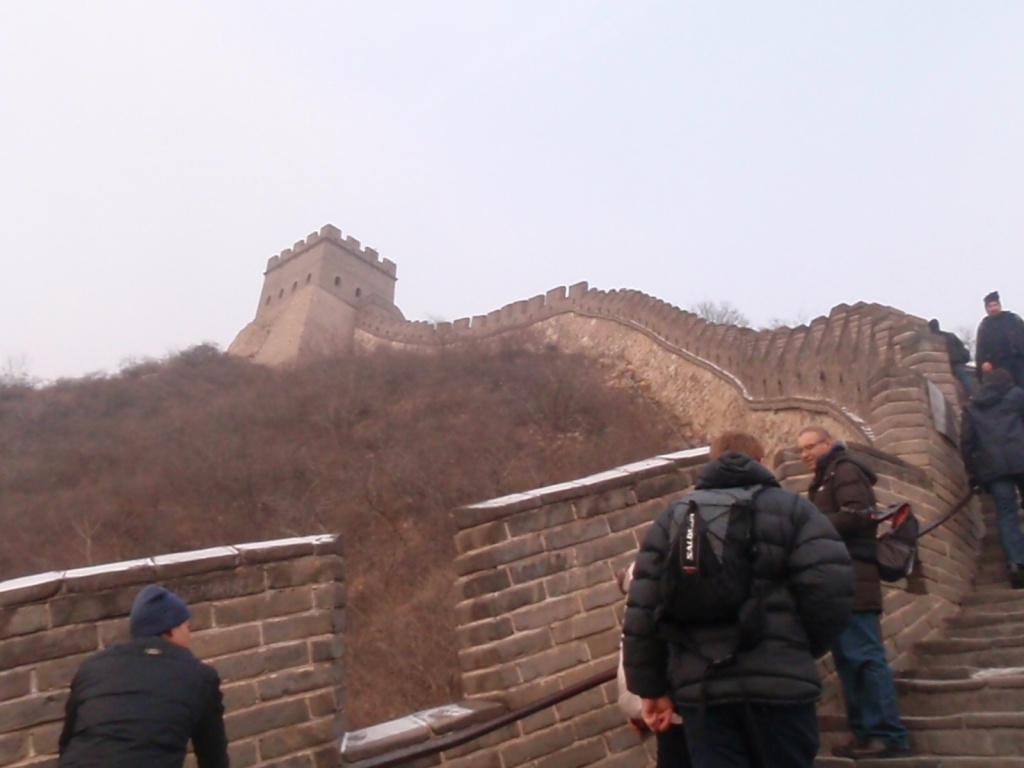 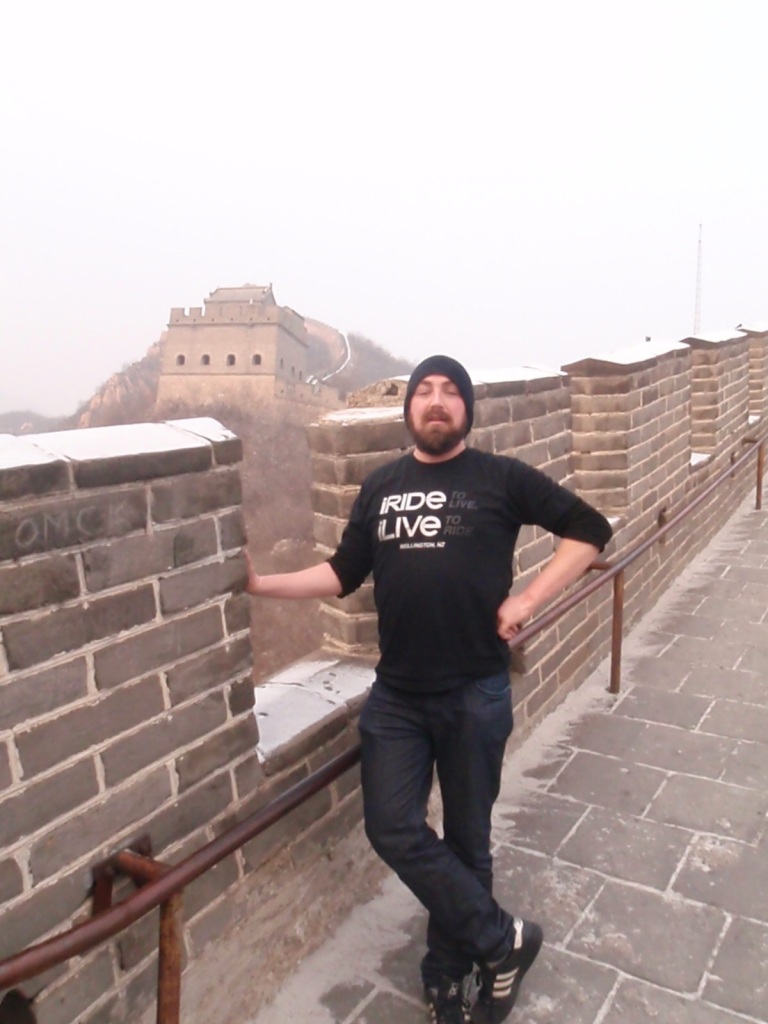 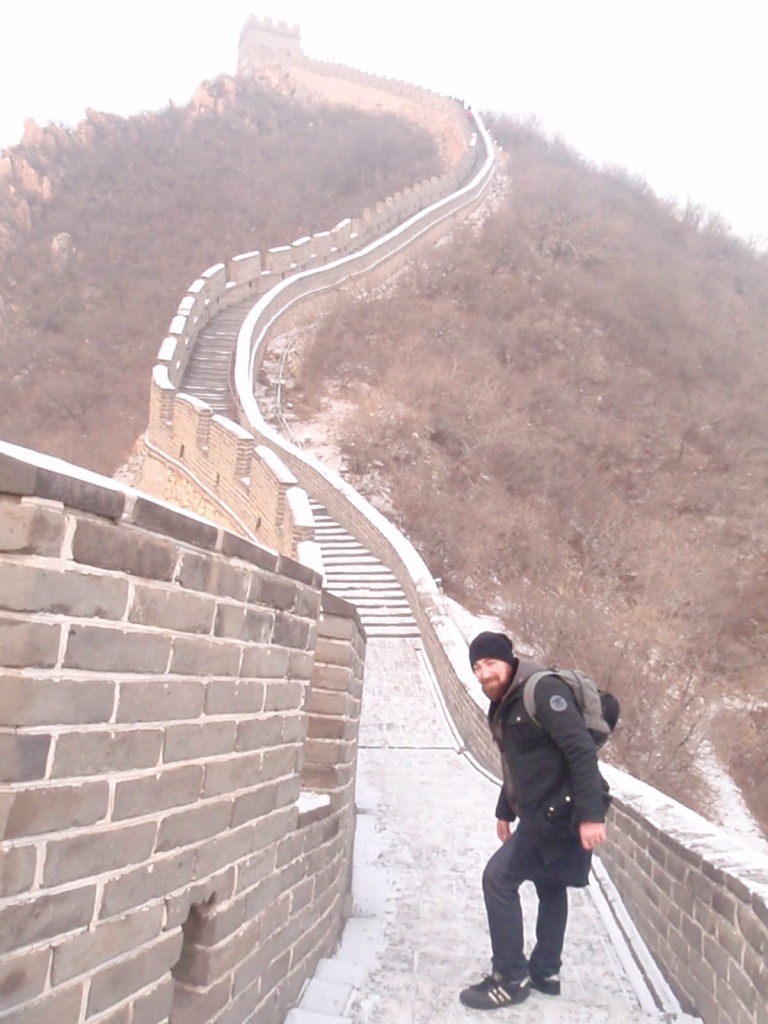 Finally we made it to the top. What an amazing view!!

After spending some time taking in the amazing scenery and feeling pretty chuffed for being at the top of The Great Wall, H-J started her descent back down the wall.  She could tell Dan was in the for the long haul trying valiantly to capture the perfect shot of the wall (read: H-J knew that Dan would fuck around for ages and she didn’t want to stand stationary in the cold waiting).   Dan is always a sucker for a good view!

And while we had worked up a sweat… it was still pretty cold. Check out the ice through Dan’s beard…. 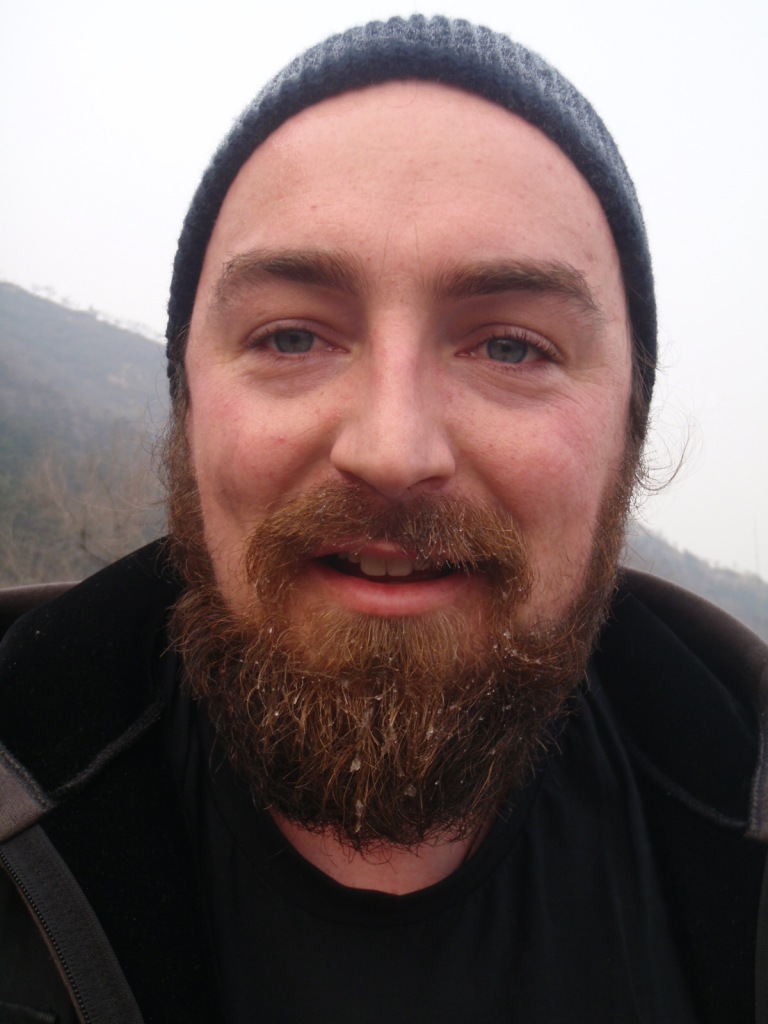 The descent was definitely a lot less lots less taxing on the body. We even found some strange snow graffiti covering the wall. 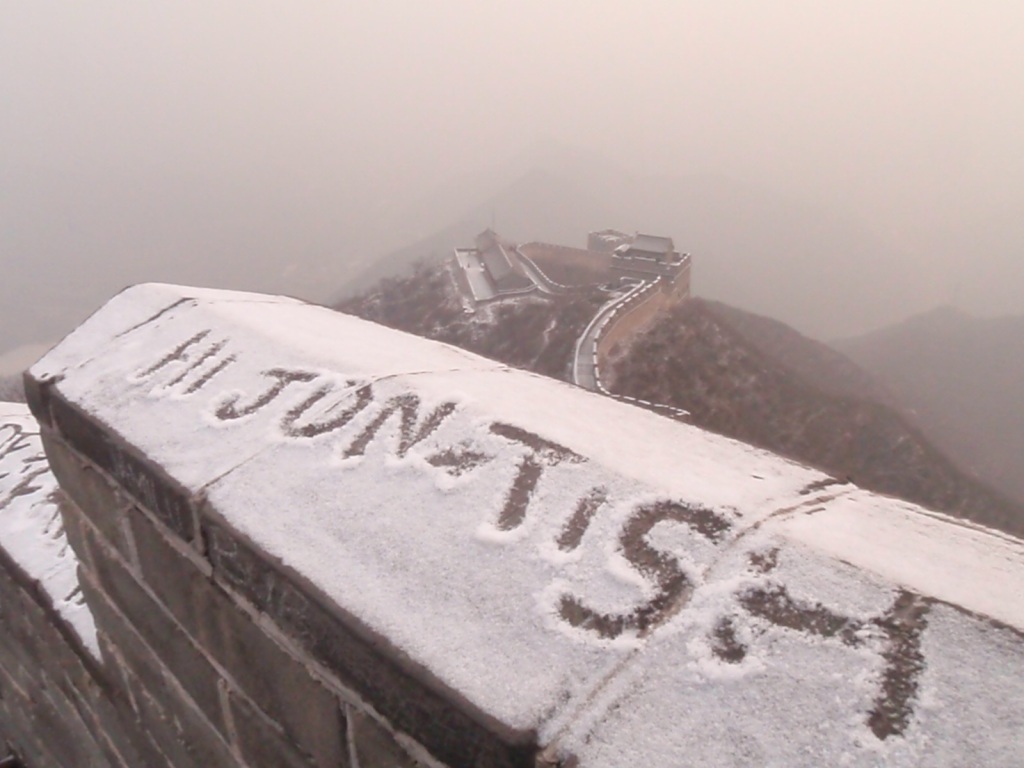 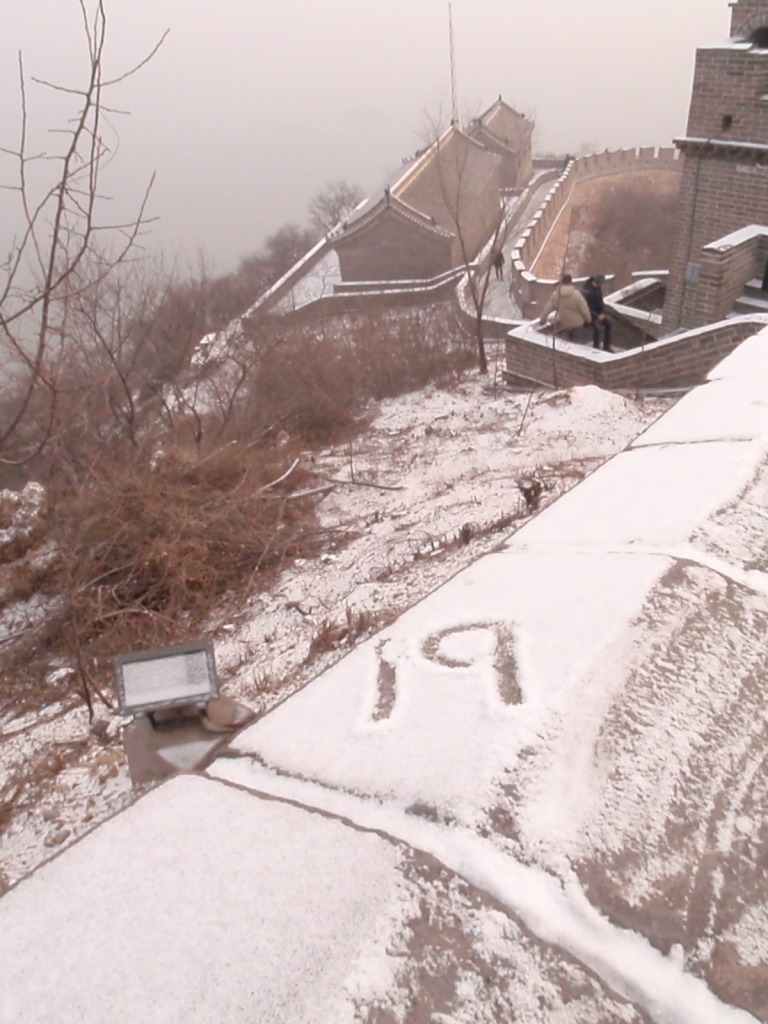 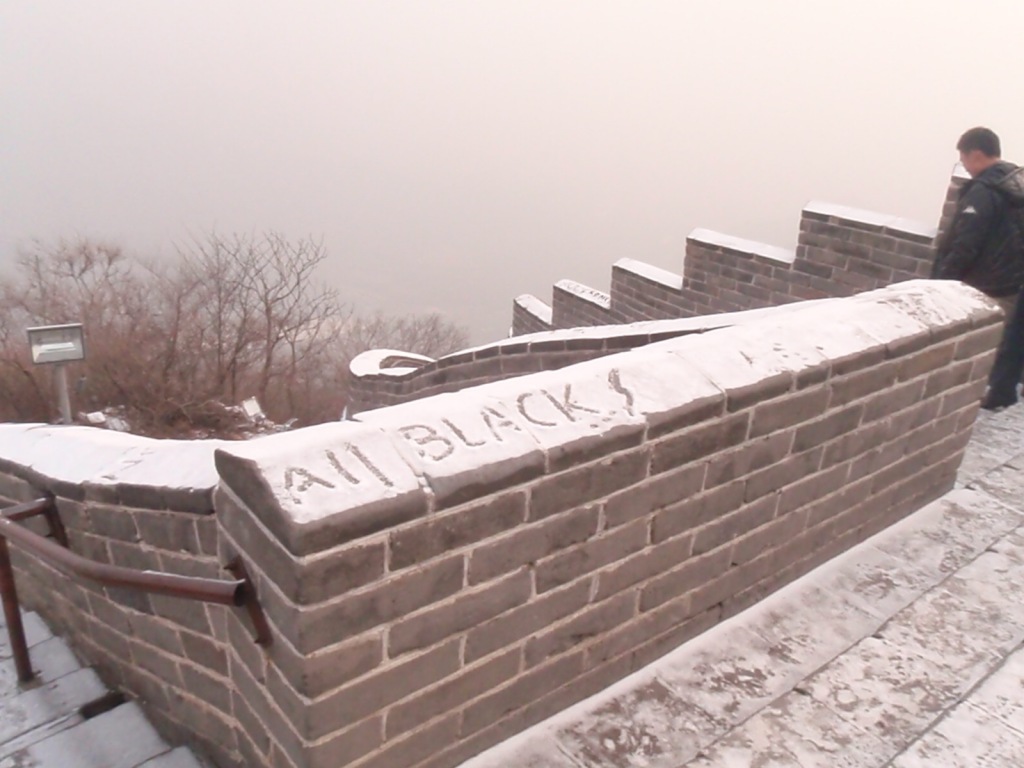 And the views were continuinually absolutely spectacular.

After about half an hour we met up at the bottom for a cheeky tourist photo before we went to take advantaged of some well advertised coffee.

Round the corner it was back somewhat to reality; rows of buses, tourist shops and people from all around the world milling about. It was hard to think that we had just experienced something soooooo cool! We found a coffee shop and in Dan’s style he talked his way onto the espresso machine and convinced the staff that he could teach them a thing or two. 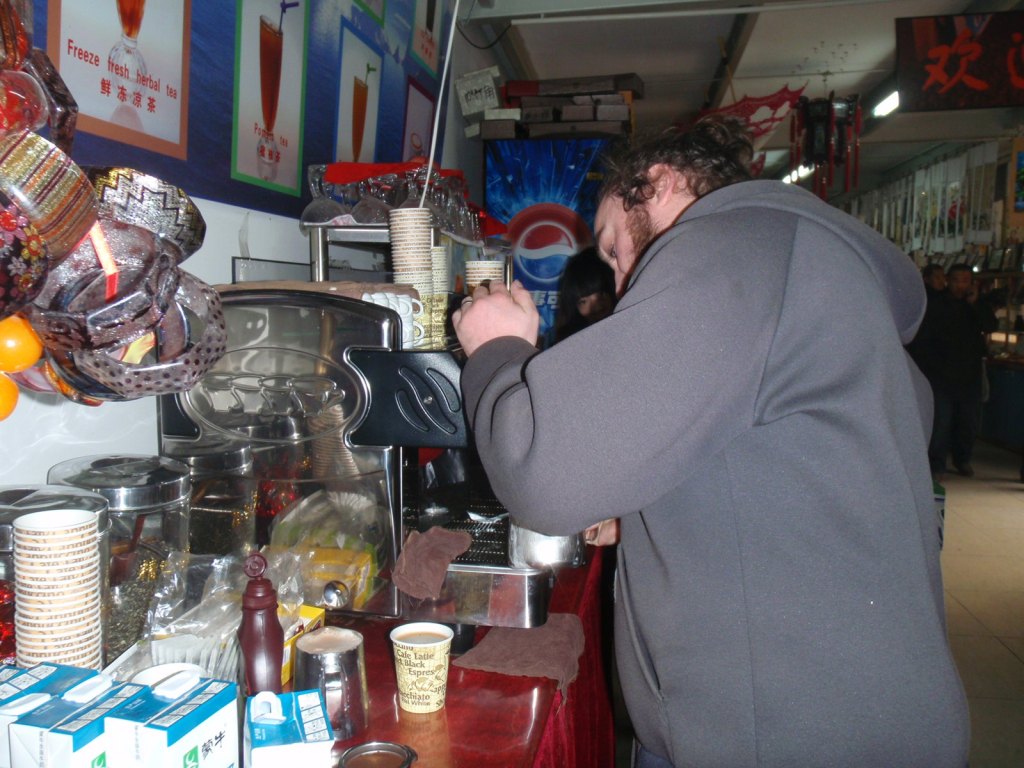 It was kind of embarrassing for H-J but hey- she married him, they got a free coffee, the best coffee so far in Asia and now Dan can say that he’s extracted at the Great Wall. Good times!!!!

This day was one to remember and this was still only the morning. More amazing China adventures still to come…