Some of the ideas and images of this blog post could be offensive to some readers. Others may find it bloody funny.  Proceed with caution.

One weekend we travelled to Ulsan downtown to explore the shopping area. After finding it impossible to get a good coffee in Korea, Dan was getting very stroppy and difficult to be around. It had been more than a month without a flat white. We wandered around for a while and turned our noses up at many places that claimed to be cafes. We then saw something we had heard about in tourist books and reviews of Korea. A cat cafe!

Now just to get this straight, H-J was ardently against the idea of visiting a cat cafe. Dan, on the other hand, always interested in a new experience, was keen as beans to walk down the slightly dodgy stairwell to drink his coffee in a room full of cats. 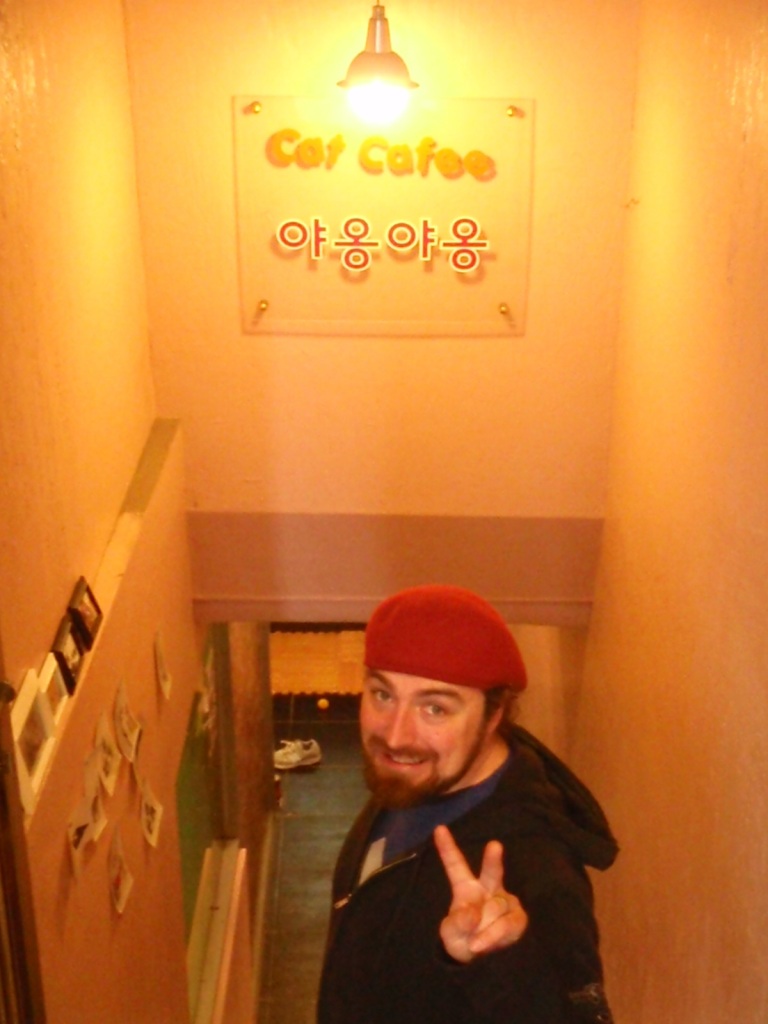 At the bottom of the stairs behind a glass door were twenty odd cats, ruling a space with no customers in sight. The two staff members could be seen on their knees picking up cat excrement and wiping up cat’s weeze. 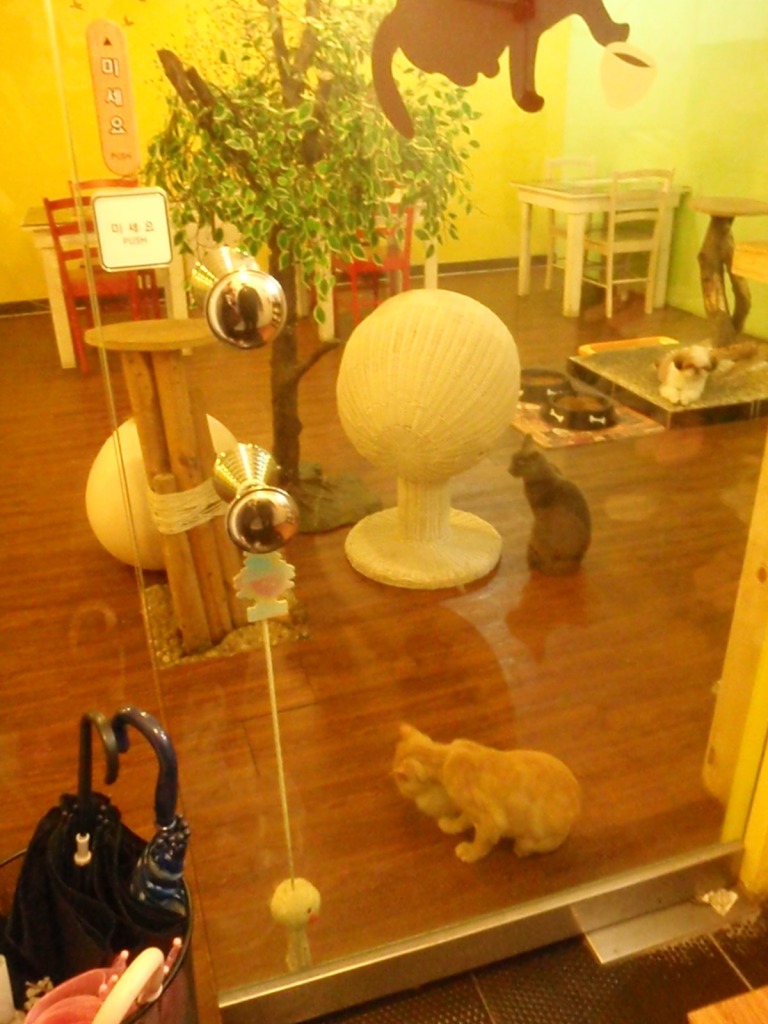 The smell was vile! Heinous you might say. Even from outside the door!  We decided pretty quickly to take a cheeky photo of the cafe from the safety of behind the glass. We walked promptly back outside to enjoy the fresh air. Never again!

We wandered 100 metres down the road and we found a cafe with a picture of a coffee with latte art, and the word’s barista training school. We both looked at each other and got very excited.

We got to counter of the cafe and Dan directed the woman behind the machine to make a New Zealand style flat white using mime. The University of Otago’s Allen Hall, and Mime and Scenario 203 was a real asset and good money spent in the end!

We sat down and our coffees were delivered. Dan sat there for a good couple of minutes and wept. It was an emotional time. The coffee was beautiful, it had colour and had a heart design through the perfectly extracted crema. It wasn’t the greatest coffee in the world, but it was a flat white, the best one since we left Pura Vida in good ol’ Welly. Bless!

The next day we went to the market in Namchang, the village where Dan works. The Namchang market is awesome. 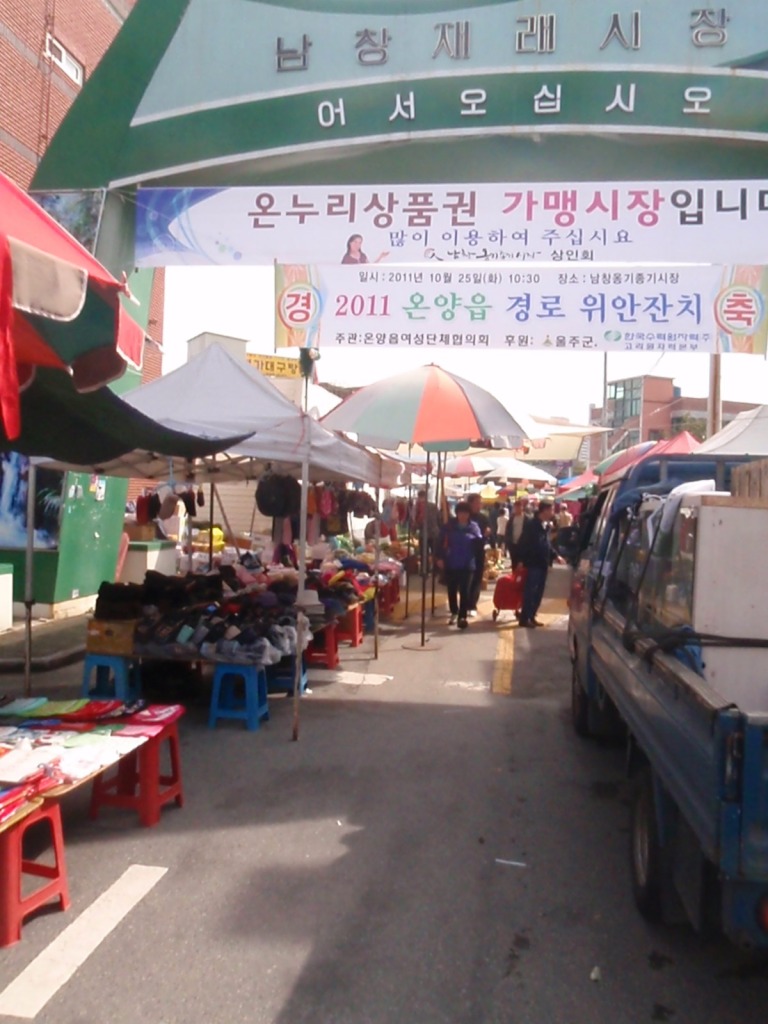 It’s full of people buying and selling their wares. Every elderly person in the area has a vege stand and they all seem to be selling peeled garlic, cabbage and turnips. 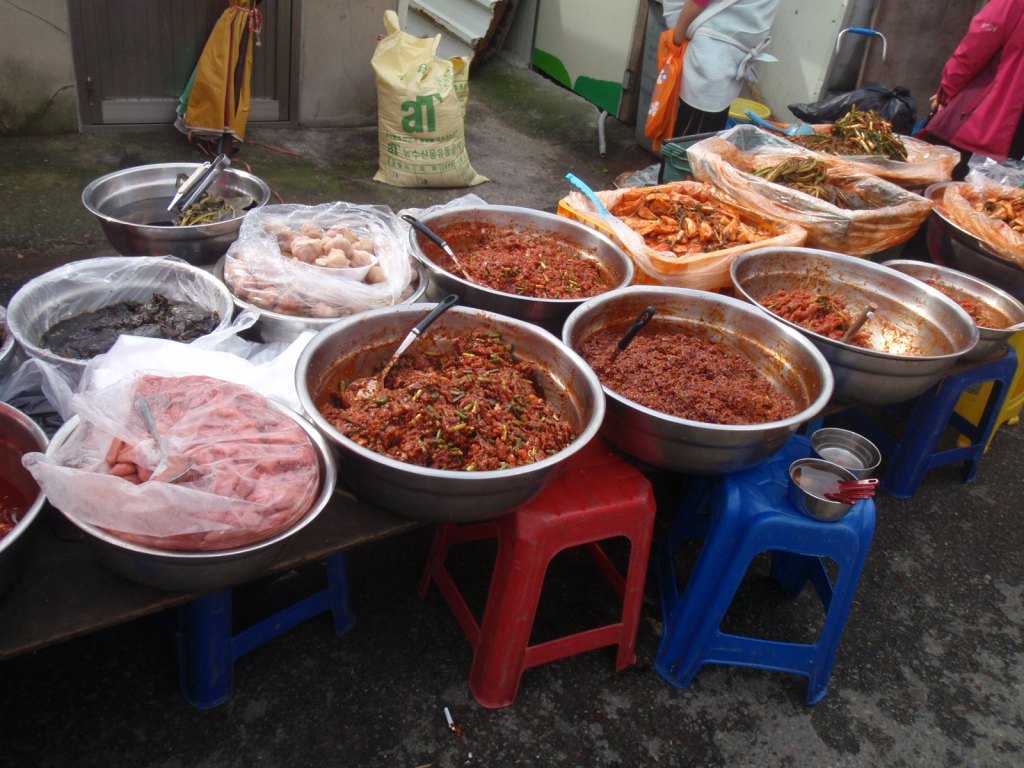 The market is on every eight days and is announced by a loud speaker early in the morning around the village. It is full of vegetables, fruit, fish, b-grade puffer jackets, street food, nic nacs, kimchi, mandu (the greatest food in the world right now), octopus balls, rice, spices, faggots (actual faggots- first time ever used in correct context), hats, dog meat, socks, e-grade duvets, eggs….wait a minute…did they say… yip, you read it correctly, dog meat. In our travels we have seen some very interesting things but nothing as controversial as this.

So here how it goes. The process starts with the cute little puppies. We are guessing they are brought to be reared to a bigger size?

They could be extra tender when they’re young; we aren’t experts. 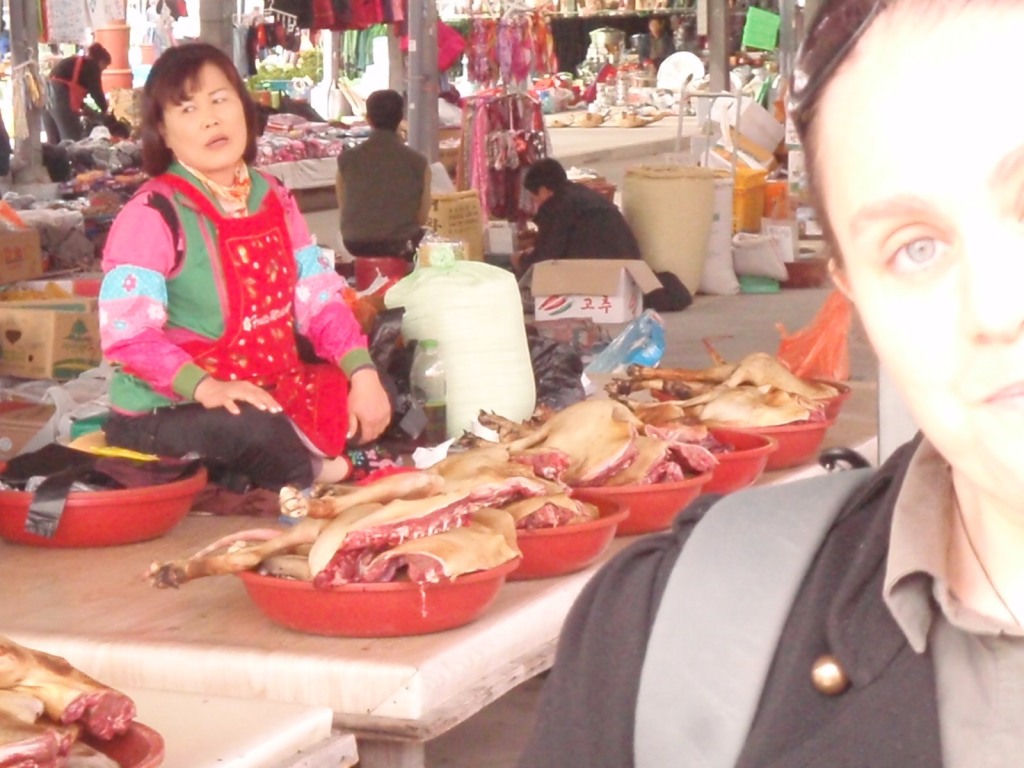 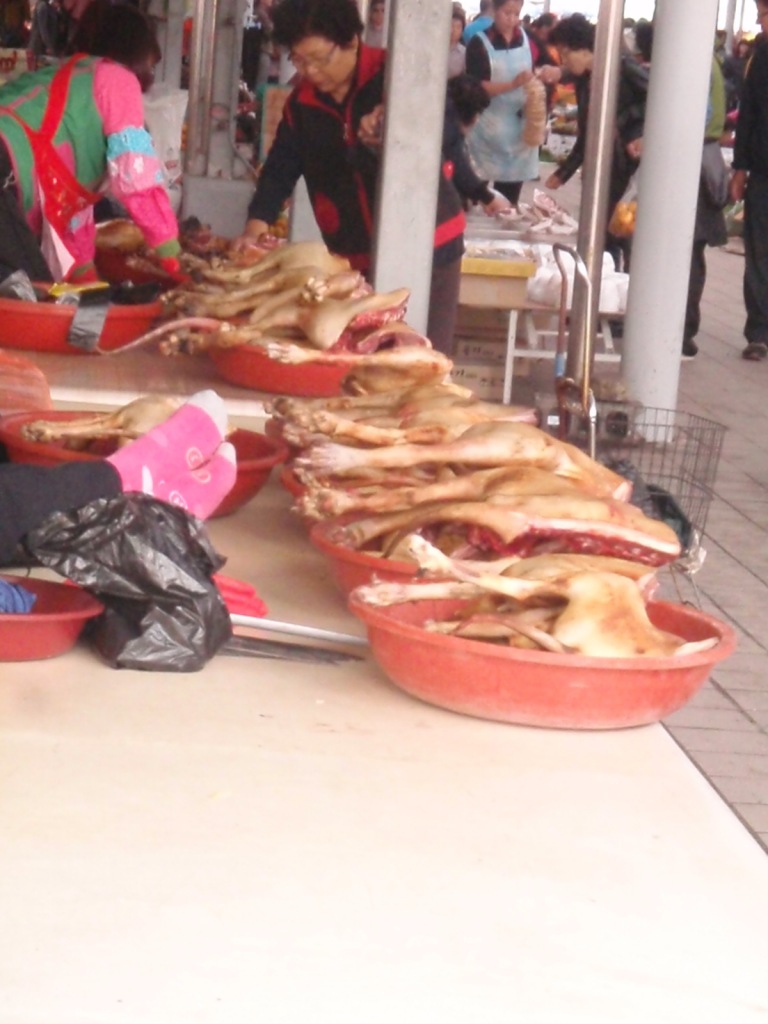 After the consumer parts with his or her cash they take the produce to be consumed in the comforts of home with a nice side plate of kimchi, or taken to an establishment (see below) to make a sweet profit from a dog bulgogi (Korean barbecue) or a nice winter stew. 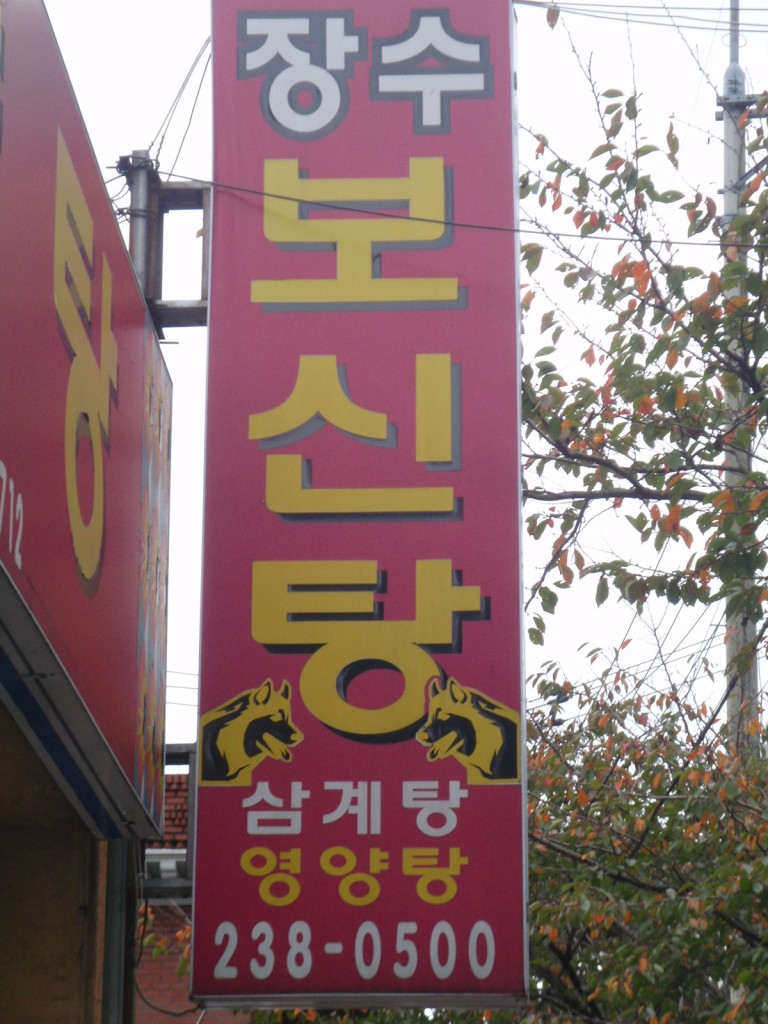 When all is said and done, Koreans have their culture and we have ours. While some may believe the eating of dog is horrific, here it is part of some Korean people’s daily lifestyle. Though like many other sceptics in the world I would doubt that the animal rights activists would be the happiest clappy chappies if they went undercover to check out the nitty gritty of the practice of dog farming.

One day Dan asks a class about their opinions on eating dog. The class were divided in their opinions. Some thought it was fine as it is a traditional dish of Korea. Others didn’t like it because dogs are cute and can be pets. One student said they shouldn’t be raised for eating because he didn’t like the taste.

After talking about Korean culinary exploits one of Dan’s students turned the question back on him. “Westerners think that eating dog is wrong – isn’t it wrong to eat a rabbit or a baby sheep? They are also cute and I know they do that in your country.” Dan thought the student raised a very good point.  Dan promptly replied with a very dead pan expression on his face; “fair enough, that’s a good comment you have made, but have you tried lamb with mint sauce, roast kumara and cauliflower cheese?” 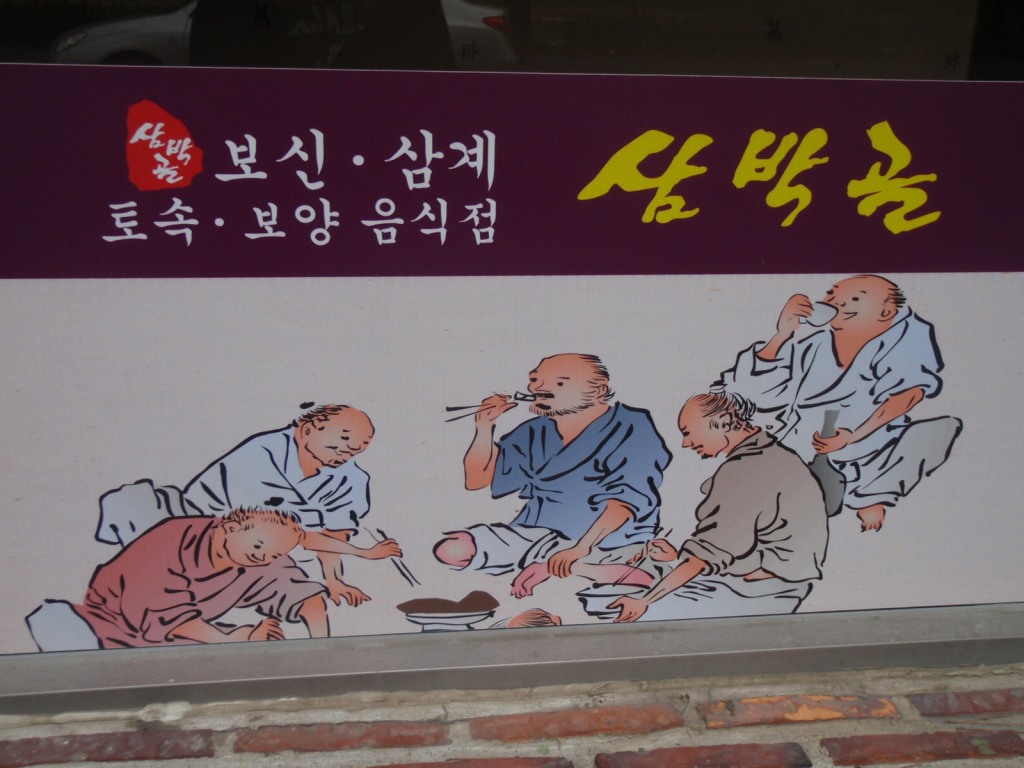